Five favorite places with ‘B’ in Southwest Bulgaria

Five favorite places with ‘B’ in Southwest Bulgaria

Today I am opening a new letter in my series of favorite destinations. After I finished the letter ‘A’ with the Balkans, the Near East (with special accent on Jordan) and various other places, it is time for me to handle the next letter. And it is only natural that I start with the place that became my home a little over 20 years ago. Southwest Bulgaria. The place I have been working in for almost the same number of years in attempts to facilitate the soft and non-mass forms of tourism with my association – the Pirin Tourism Forum. Nice place. I admit, I am biased.

This is the Rila Mountain above Blagoevgrad, at Macedonia Hut. A vew from Rila National Park. Many people connect the park to the Seven Rila Lakes, Borovets, Mussala, or Malyovitsa. But I can assure you that, if you decide to walk around the Parangalitsa Reserve (I underline, ONLY along the allowed trail; this is a reserve after all!) in the direction of Macedonia Hut, it is very likely that you won’t meet another human being. Which has its advantages, just don’t forget in summer that most of the path is at the open and you can’t find even a trace of shade.

Most people do not relate Blagoevgrad to mountains and parks, unless we count the by-city park of Bachinovo where the whole town flocks together at the very moment some sunshine appears in the sky. People do relate it to the pleasant pedestrian central square with numerous cafes and shops, and numerous young people corteously provided by the two universities – the Southwest University of Neofit Rilski and the American University in Bulgaria. Sometimes, to the Renaissance Varosha Quarter with the Church of Vavedenie Bogorodichno from 1844, a designated National Monument of Culture. But they rarely enter the Regional Historical Museum which is a big mistake as it is full of many interesting little things like, for example, the biggest teeth of a living creature I have ever seen.

I love my memory of Bansko. Before the new ski-runs and the flashy hotels. When, as a schoolgirl, I visited it for the first time and in the mornings, I met only cows on the streets plus smiling nice old grannies who didnlt know me but greeted me joyfully and spoke to me in a totally non-fathomable language. And later on, when I started working in Southwest Bulgaria and I saw the unique combination of rich history and the main entrance to a UNESCO site. By the latter I mean Pirin National Park. The mountain that every Bulgarian claims to love and for which we have written a number of songs. The same mountain we tried hopelessly to turn into the Alps, trimming her naked in the meantime.

Right, let’s be more positive. To my satisfaction, Bansko still has one the most wonderful museum networks in the country, even more impressive in a small town like this. The house of one of the most translated and lamented Bulgarian poets, Nikola Vaptsarov; the permanent icon exhibition at the Convent of the Rila Monastery; the museum house of Neofit Rilski (father of Bulgarian secular education and an encyclopaedist) and the Velyanova House… I love to re-visit them all any time I am back in Bansko but I think my favorite is the room which Master Velyan Ognev (a genius artist) painted for his beloved wife, so she felt good sitting there. Rural view from the Razlog Plain

Everyone knows about the precious mineral springs and the wonderful hotel pools of the village of Banya. I am very fond of them and enjoy them in every possible moment. However, to me the charm of the Razlog Plain has always been in the best meaning one could attach to the word ‘countryside’ or ‘rural area’ – the same rural areas the European Union is pouring so much money into. And the sight of three of the nine mountains of Southwest Bulgaria together – Pirin, Rila and the Rhodoppes – is overwhelming in any season and all possible colours. My personal preferences are inclined to the green but that’s a matter of personal choice.

And I must say, it is obvious that many of our ancestors also enjoyed the mineral springs in Banya, as there are various remains of old baths. The Roman Bath and the Old Bulgarian Bath have been restored under an European project and are even functional. Unfortunately, no one can bathe in them yet as there purpose is strictly museum-bound but they are still worth seeing.

It is already spring, but here I post a winter photo just for the idea. Belitsa has long been known for its mountain resort of Semkovo which is suitable for both summer and winter. In the summer, you can fill whole trunks here with mushrooms and forest fruits. And in the last winters, the people of Belitsa have decided to focus on their WInter Fiesta which they organize in the beginning of each February. There are winter sports and discussions abut the future of tourism in Southwest Bulgaria; there is an open stage with singing and dancing enthusiast; and what unfortunately cannot be shown on a photo is that intoxicating smell of barbecue that is so typical of every Bulgarian holiday.

We cannot miss to mention the other thing Belitsa has become famous for in newer times – the Dancing Bears Park. It is unique on the Balkans and definitely draws interest, even when the access to it was off-road. Although the owners claim that they are not after tourist targets but only environmental and educational, tourists keep coming and enjoying the bears who look well cared for. I hope they will soon start (the tourists, not the bears) stopping also at the Historical Museum in Belitsa as it is also quite worth it.

I have spent a lot of time in that mountain which, before the ‘democracy’, was hidden from the ordinary Bulgarian behind the Iron Curtain. Since 2007, you may find here the youngest Nature Park of Bulgaria, and its people living at the Foothills, wonderful people with a specific sense of humour. I worked for the Park between 2011 and 2016, and I contnue to help however I can even now. We developed interesting thematic trails around the adjacent villages – the Life of the Chestnut Trail, the Butterflies and Flowers of Belsitsa Trail, the Travel through History Trail and others. We signed the paths to the magnificent Belasitsa waterfalls with colourful names such as the Shy Waterfall and Mangaro. And at the Visitor Center of the Park in the village of Kolarovo, there are fun challenges for people of all ages.

I already wrote about the annual Chestnut Festival that we organize in the second week-end of October in the village of Kolarovo. I am very fond of it and cannot but speak of it again. If you want to try personally the aromatic chestnut honey and other delicacies prepared by the local people; if you’d like to get a bonus of the abovementioned local sense of humour, that is the time and place to do it. 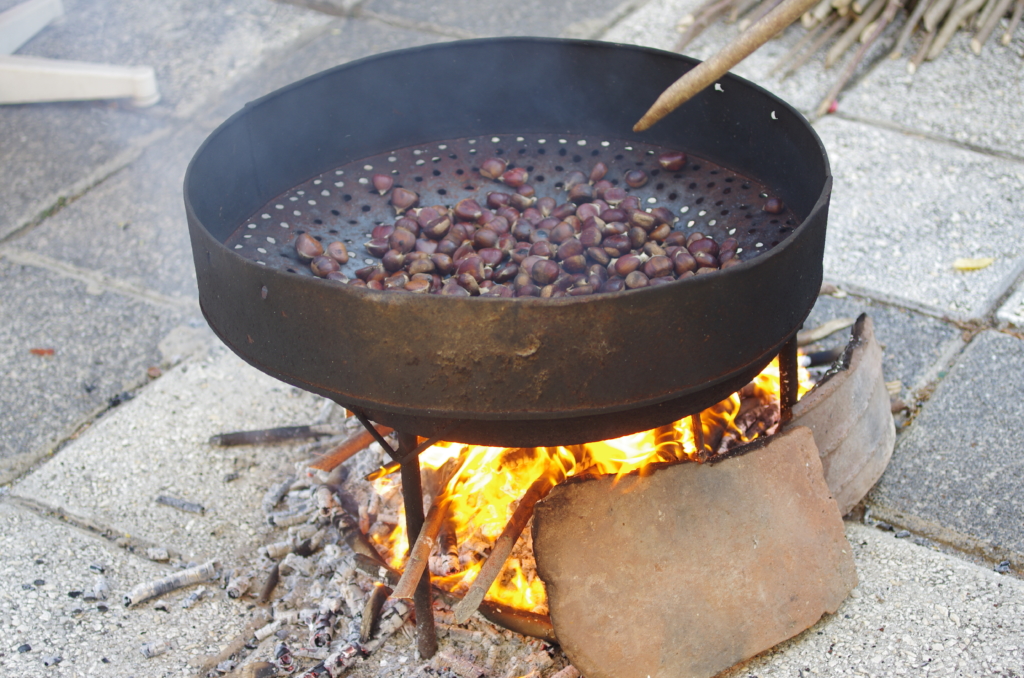