Five favorite places with ‘A’ in Jordan

Home/Ratings/Five favorite places with ‘A’ in Jordan
Previous Next

Five favorite places with ‘A’ in Jordan

When presenting my previous portion of alphabetical destinations with the letter A (namely the group ‘various’), I promised that next time I will pay special attention to some interesting places to visit with ‘A’ in Jordan. What can I do, I have a special place in my heart for it. I suppose that, like many other travel-addicts, I started my journey to Petra ever since I watched the third Indiana Jones movie, only then I thought I would never be able to see it in the flesh. Well, veni, vidi, as the Romans used to say but Jordan turned out to be so much more than Petra. So, let’s start…

We cannot but start with the capital. A huge human ant-heap in white, flowing over the surrounding hills like a blanket of houses. Many of the buidlings have this specific look, like you cannot understand whether they are unfinished or already decomposing. The main point of attraction for all visitors is the so-called Citadel of Amman on one of the abovementioned hills where civilization after civilization used to dwell, and there are traces from almost everyone. Well, if not ‘in situ’, then in the small museum which to me is a precious pearl with items unseen elsewhere.

Roman columns in the Citadel are hard to miss while the little that’s left from the Umayyad Palace from the early 8th century reminds us that the very same Umayyads were the authors of the famous Alhambra in Granada, Spain. This you can see on the photo below; the photo in the beginning of this post, on the other hand, shows the other focus of tourist attraction in the Jordan capital – the Roman amphitheatre. I have absolutely no intention to explain how I got back down from there. 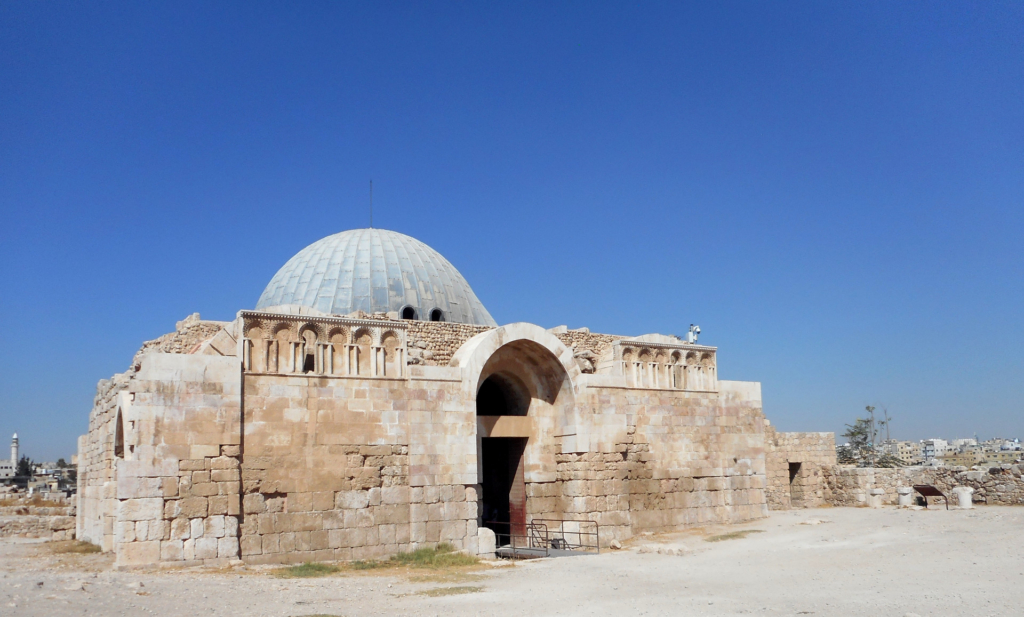 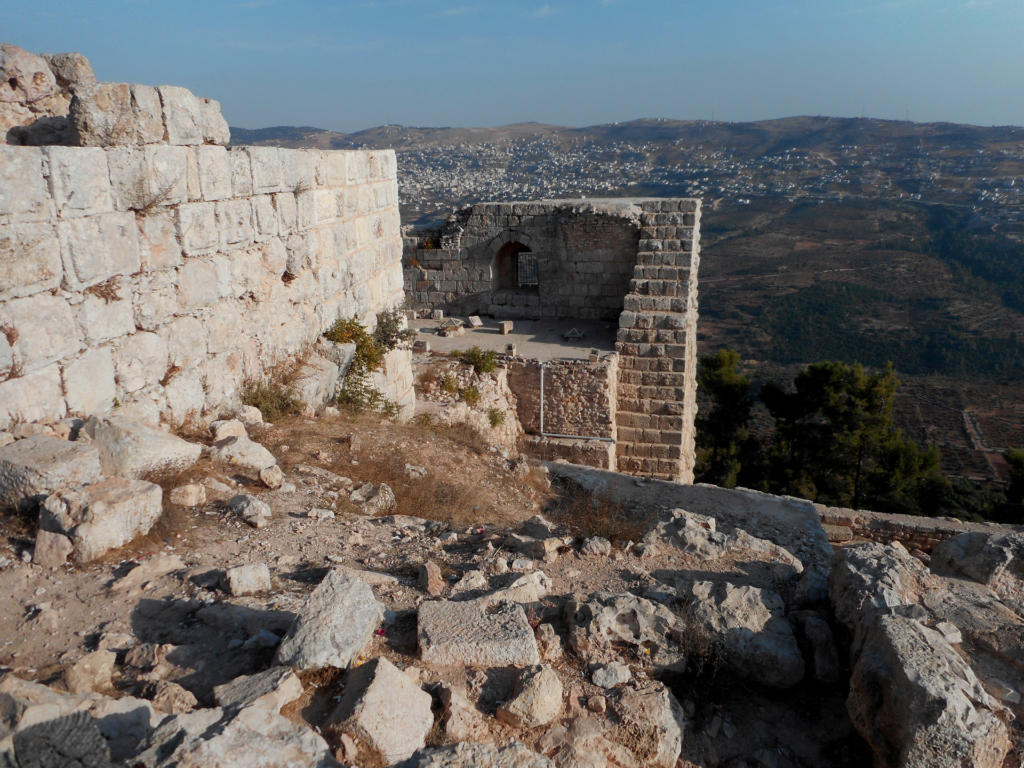 A medieval fortress from the 12th century in the northwestern part of Jordan. They claim there used to exist a Byzantine monastery underneath which is probaby true since we found quite Byzantine-looking mosaics on the lower levels. To me, as usual, most charming was the labyrinth of premises popping up at various levels and the multiple stairs running up and down. From the castle, there is a 360° view of the greenest corner of the country. There is that view on the above photo, remember it well before we start for the desert to see the other A-sites.

There is one other thing I’d like to show you from the Ajloun Castle. Take a look at the next photo and pay attention to the vertical channel dug into the stones that runs along the wall to the right of the stairs. That used to be a part of the water-supply system of the fortress. In a land where water is scarce, every drop is of significance. So, all the walls of Ajloun used to be ‘carved’ with such ditches which collected the rainwater and led it down to an underground reservoir where the inhabitants accessed it through wells. 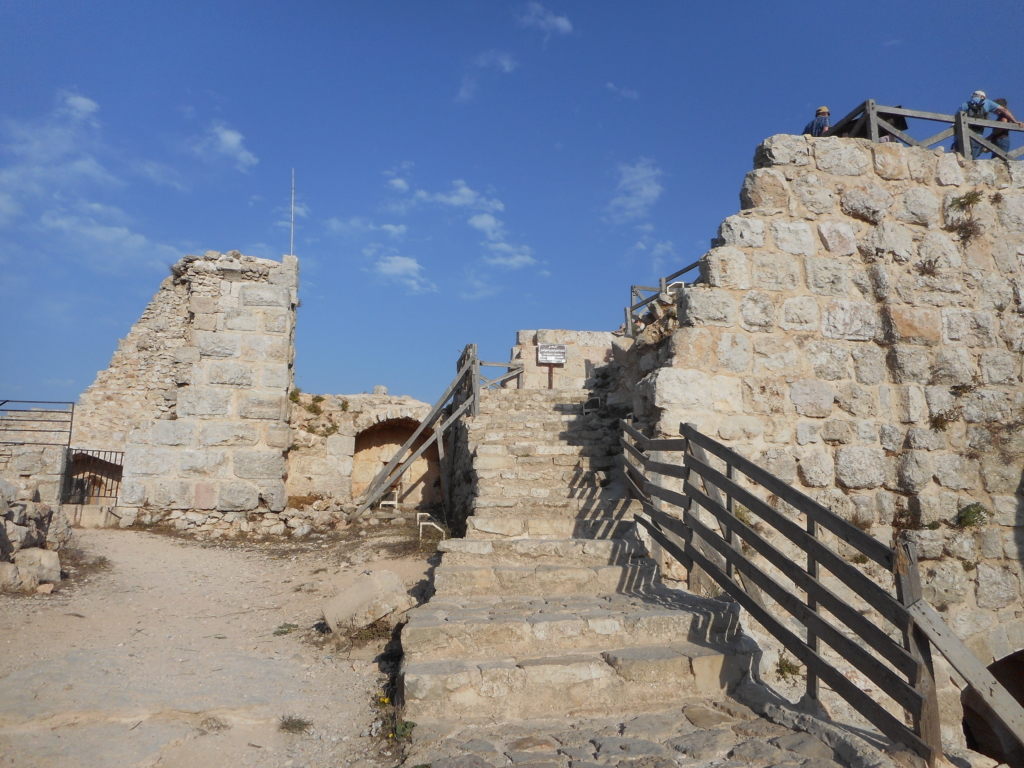 It is located sort of opposite Ajloun, in the eastern ‘sleeve’ where Jordan stretches between Syria, Iraq and Saudi Arabia. The reason for its existence are the freshwater springs of the Azraq Oasis, the only water source in an area of almost 12,000 square kilometers! First here lived the Nabateans whom we know as the builders of Petra; same as in Petra, the Romans arrived here at some point. Later came the Umayyads and many others.

The Al-Azraq fortress is built entirely of basalt blocks, and have in mind that basalt is the local material to be found in abundance. I am not an expert myself but I have been told that basalt is very firm and solid which is why it is really very hard to process. Well, local builders obviously managed it and the massive stone gate at the main entrance of the fortress is still rotating smoothly in its slots just like it did hundreds of years ago. 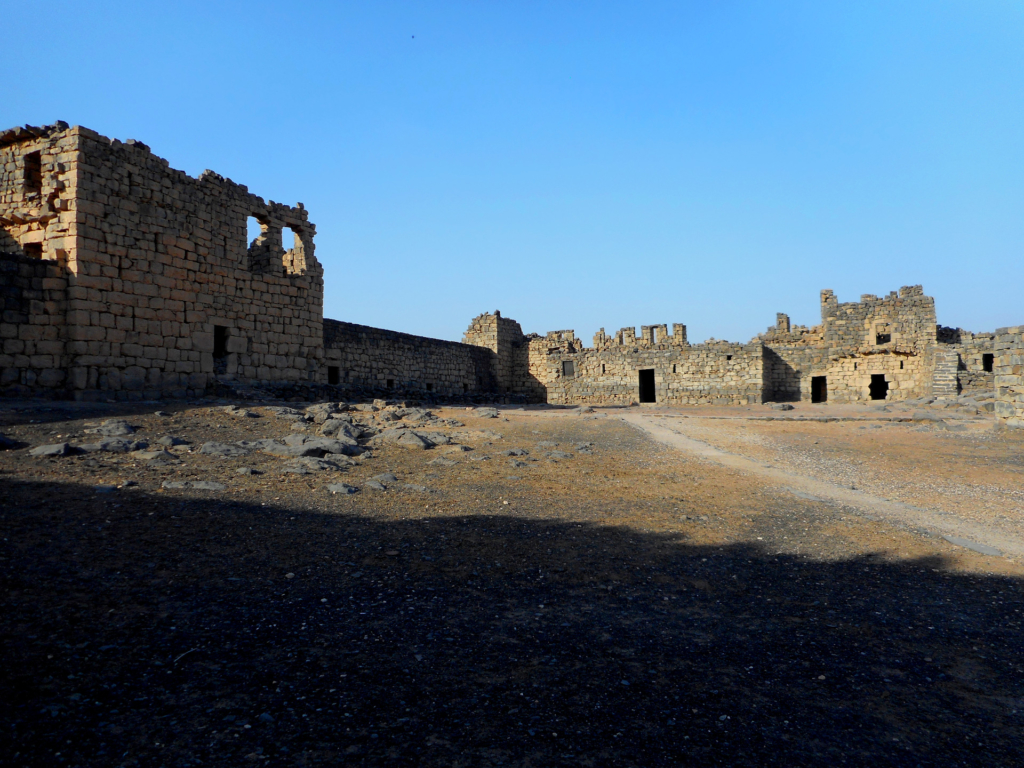 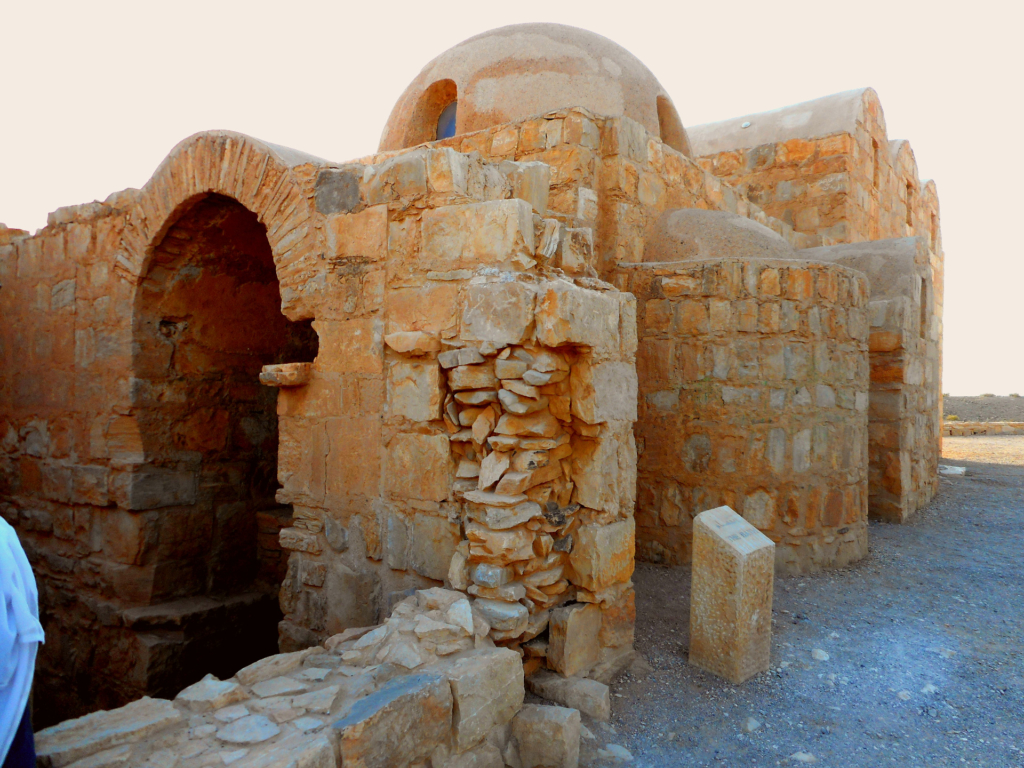 Believe it or not, what you see today in the middle of the desert in east Jordan, not far from Al-Azraq, used to be a hunting lodge of the khalif. And if you ask what on Earth he hunted in the dust and rocks, the local guide will tell you that once the whole plain was covered in thick forests with cold springs and many four-legged temptations for the hunter. The location of the hut was furthermore connected to the existence of a freshwater underground source which is also long gone now.

The site has been included in UNESCO World Heritage List not for what’s missing today but for what’s left. And it is the inner decoration comprising – in my opinion – rather Byzantine wall paintings. We visited Amra almost at twilight and it was quite dark inside already. The murals were not in a very good condition although a group of Italian restaurators was working on them. Last but not least, I lost the battery of my camera and had to take pictures with an old phone. All this explains the bad quality of the photo below but I hope you can still get an idea. 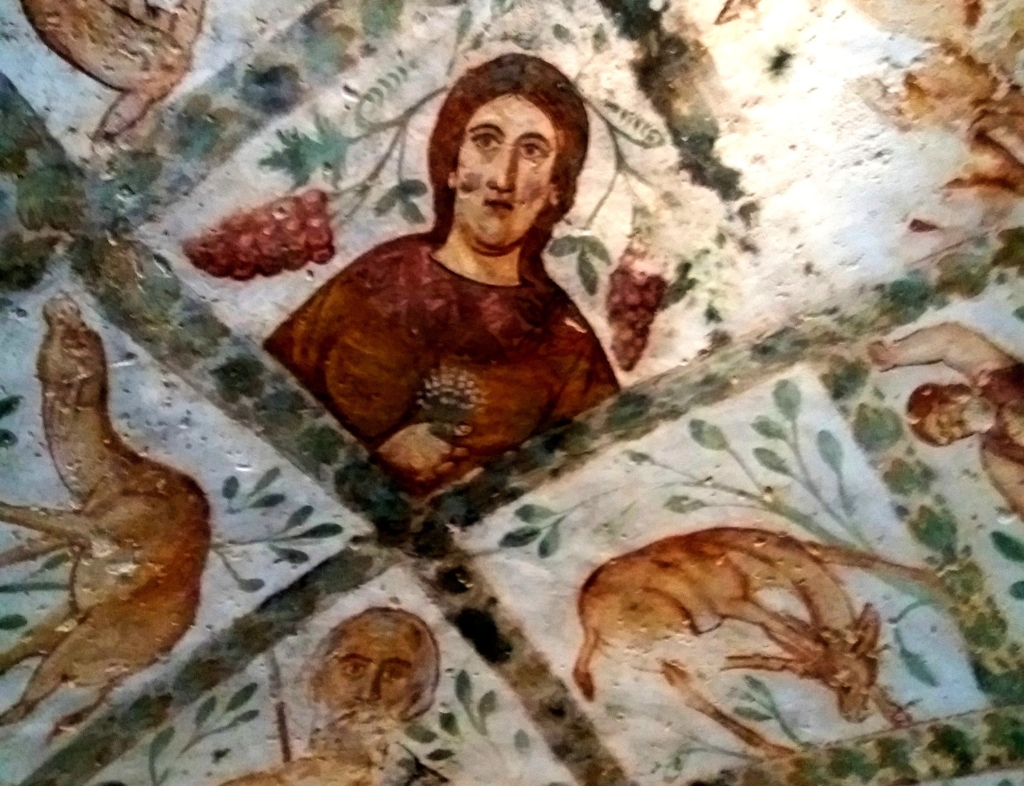 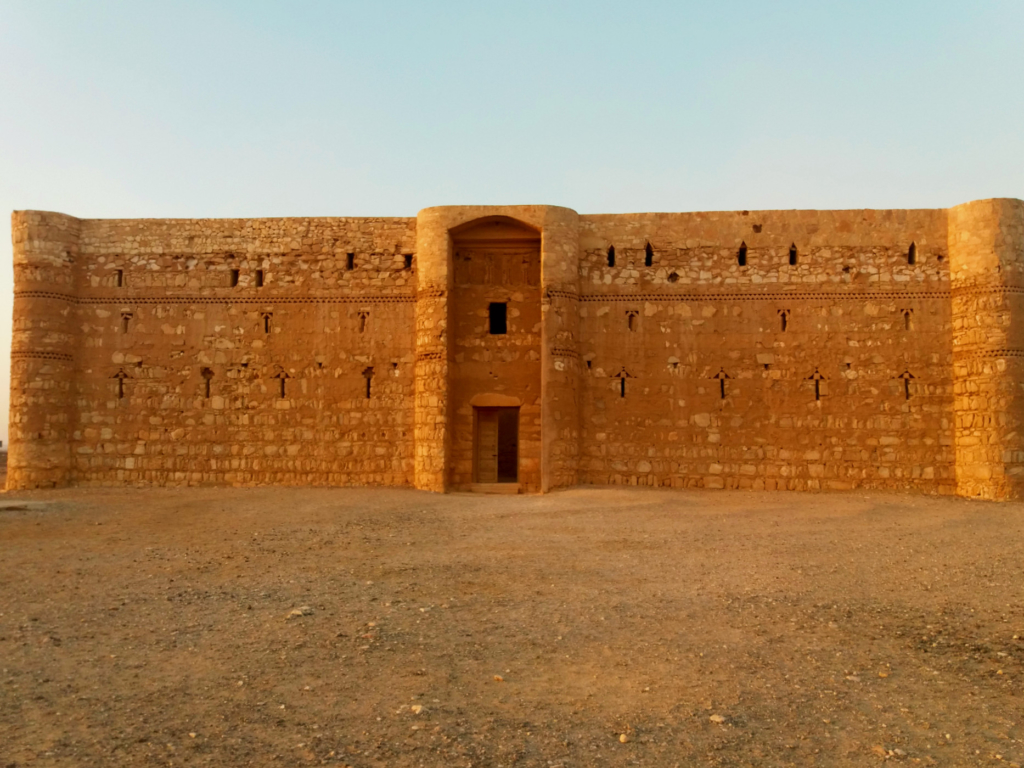 If you have ever thought of an appropriate decor for the Tales of 1001 Arabian Nights, I can suggest the perfect one. It stands amidst the very same desert where Amra is located. At present, it is in the middle of nowhere but many years ago, an important trasnport corridor obviously passed by it as Al-Kharana was a travelers’ inn and a rather big one. Although it was no one but us and the pugeons inside, the atmosphere was such that I almost expected the appearance of a long-bearded old man in pointy slippers and shiny turban to offer us some tea. An almost mystical sensation.

And since I keep mentioning the desert in relation to my favorite places to visit with ‘A’ in Jordan, I believe it is appropriate to clarify that I am not speaking of sandy dunes Sahara style. I am speaking of endless plains of chopped basalt only the eastern highway to Iraq runs through. The odd thing, however, is that there is a dirt road that runs parallel to the highway some meters away, marked with the strangest kilometer signs I have ever seen. It is either that or I don’t know what. I accept suggestions. 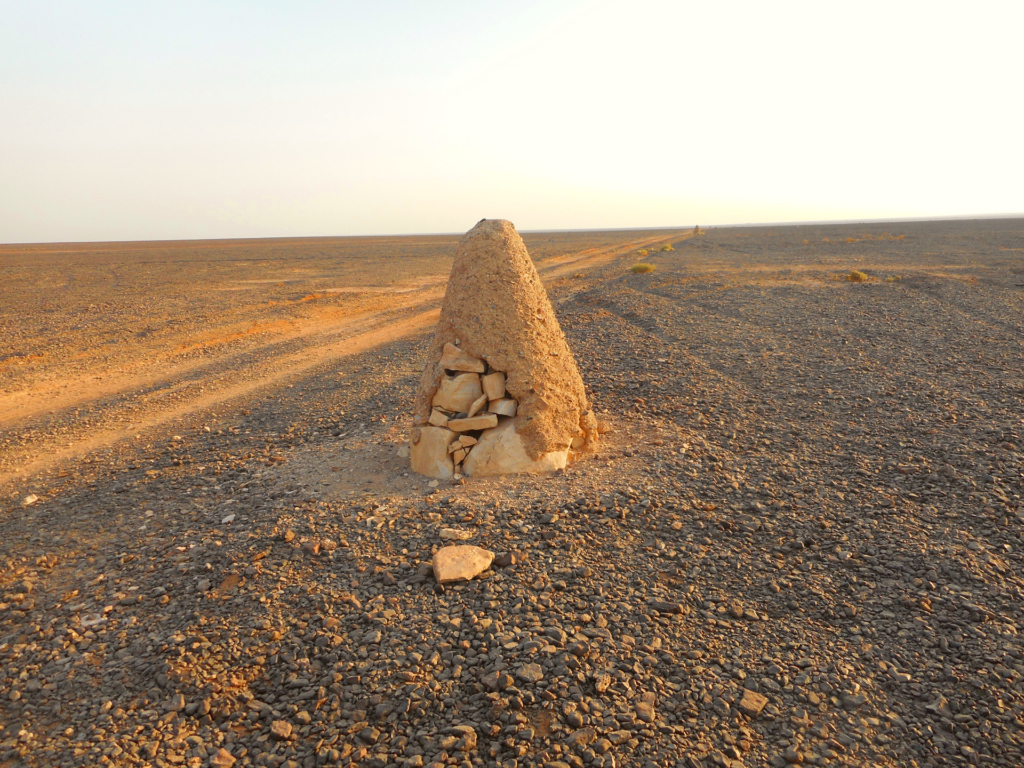