Home/Rome by night
Previous Next

This article about a night tour of Rome is in fact a memory. I was there the previous year and would go back at any time. I didn’t write in a blog then but kept a travel diary for myself. So, here is what my Rome diary reminded me of. We land at Chiampino Airport as scheduled at 7.30 AM local time but that is the last thing on schedule in our Italian-and-Mediterranean reality. For nealry 15 minutes after landing, we keep sitting quietly in our plane, as – I’m quoting the captain – another plane has taken our place. Outside, we decide to wait for the Atral Bus to the city which was supposed to take not 5-6 EUR as all the rest but 1.20 according to some clever web sites about how to live easier in Rome. Well, at the end we still pay 5 EUR but much later than our fellow plane-men as no Atral ever shows up. Arriving at the address of our accommodation, we meet another specific feature of the Italian tourist service, as the phone number I am supposed to ring doesn’t work and all I can hear after dialling is an indistinct female voice record clattering in very fast Italian language. As it turns out later, that was the number of the owner’s husband who was presently working in Norway and therefore turned his phone off… 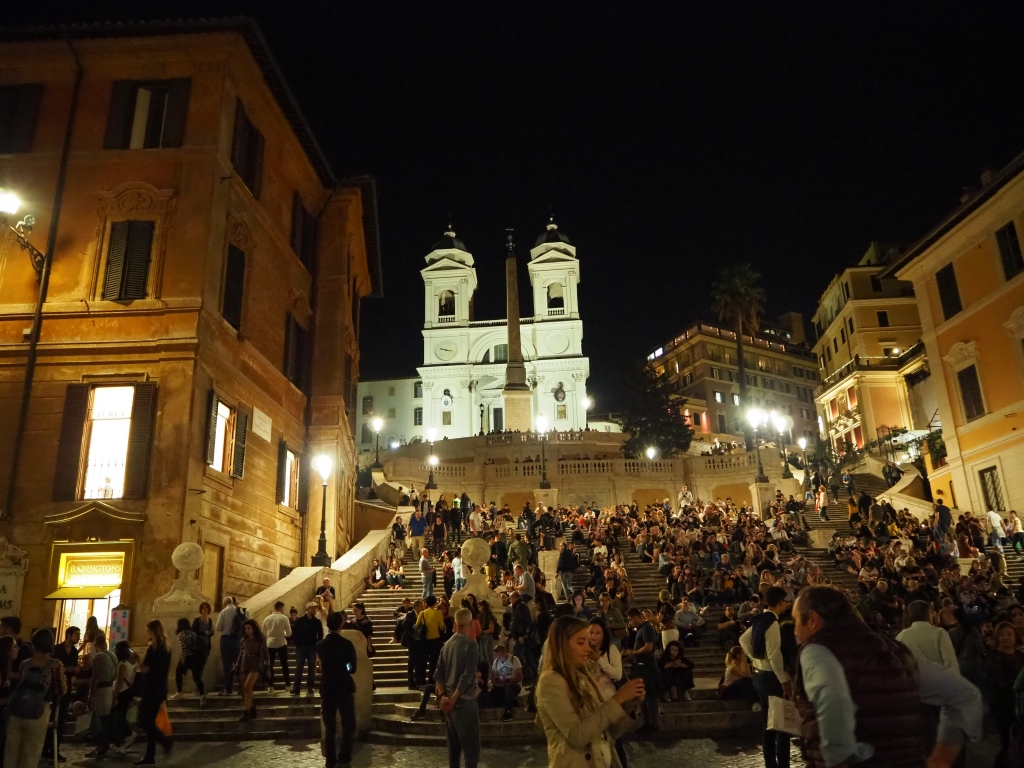 After that lyrical introduction, it is time for me to introduce the night tour of Rome which is what I am actually talking about. In the same day of our arrival, at 8.00 PM, we find ourselves at the so-called Spanish steps of Spania Square which turn to be quite French steps in fact, connecting a French church with an Italian square, only stuck within the papal policy of international balancing materialized in the renting of a residence to the Spanish king at this very square. This and many more interesting facts we learn from our guide Arianna, with whom we undertake a nightly free tour around the center of Rome. The tour starts at the mentioned French church of The Holy Mother on Top of the Mountain (the top of the Spanish steps appears to be a mountain unlike the rest of the 7 Roman hills!) and the ever-present Egyptian obelisk that you’ll find in front of every more important church in the Eternal City. 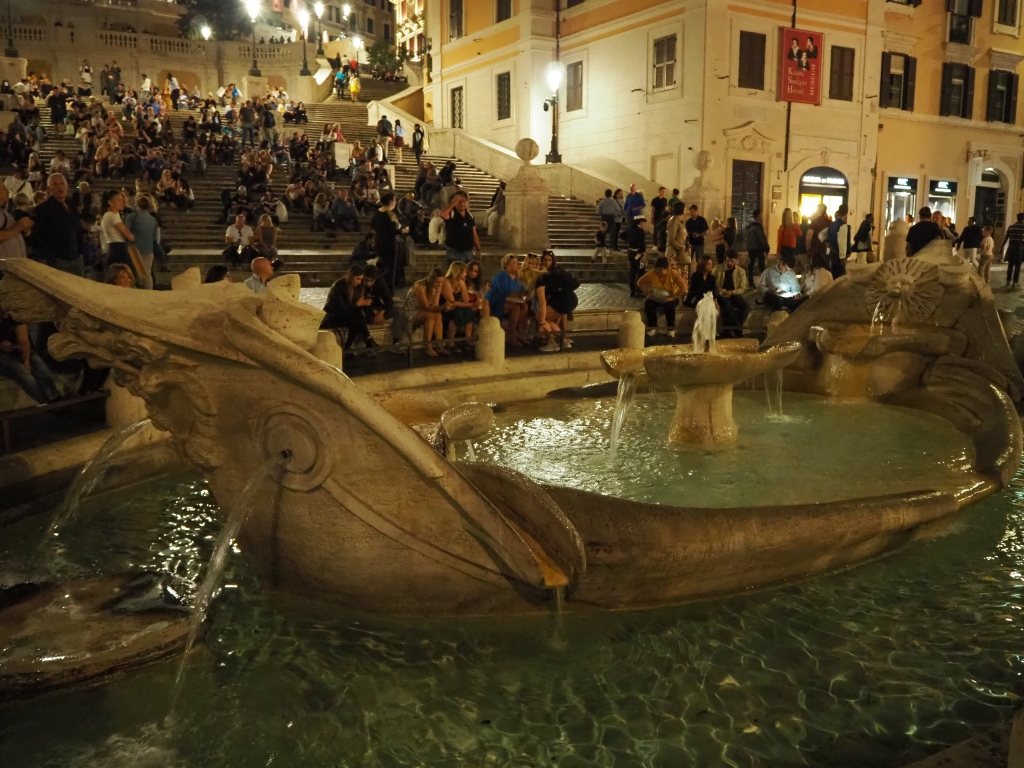 On the Spania Square itself, you will see the boat fountain of Bernini-Father which Romans did not like as it depicted a transport boat for barrels and not something more refined and romantic like, for example, grape-peeling lavish beauties in scarce clothing. Here we learn about the habit of Romans of expressing clearly their discontent by adding a “cha” or “cho” at the end of the word; this would make Bernini’s fountain the Fontanacho. Our tour continues along the central street of Old Rome – Via del Corso – and towards the tomb of Emperor Augustus which was turned in all sorts of things during the ages, including a medieval theatre. 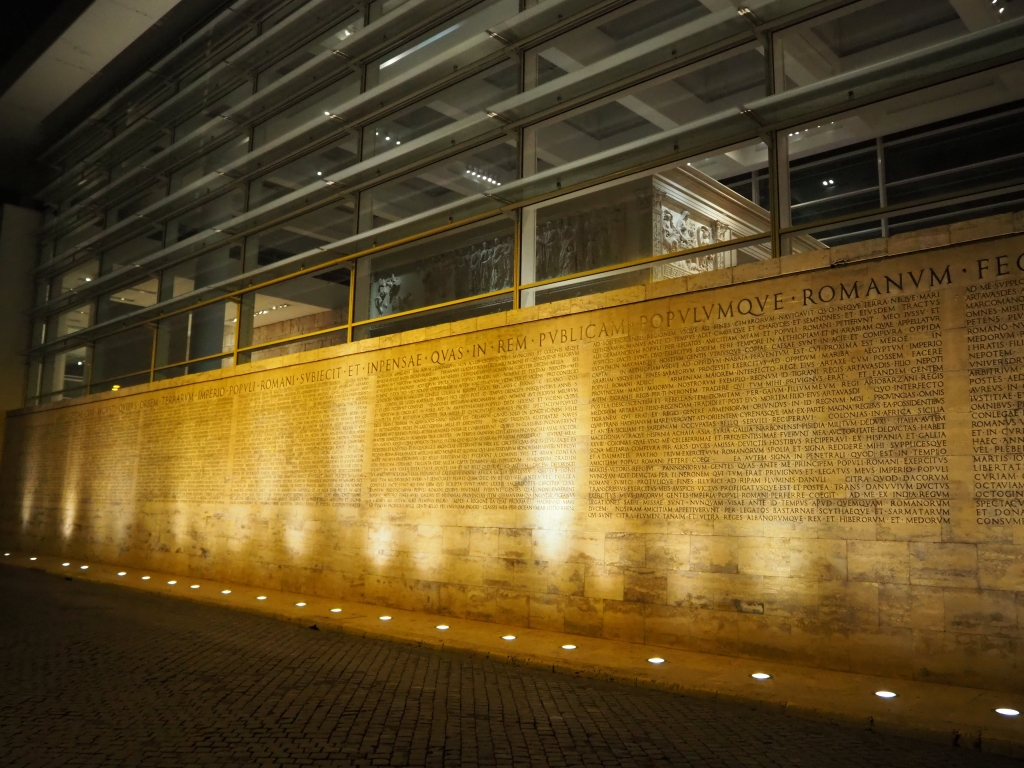 The so-called Altar of Peace or Ara Pacis of the same emperor has been collected piece by piece during Vatican excavations in the beginning of the 20th century and brought to the city center by Mussolini. The altar itself is seeable inside the interesting construction on the above photo but it is worth mentioning the vast description of the life and deeds of Octavian-Augustus on the front outer wall, which I define as the longest CV in the world. 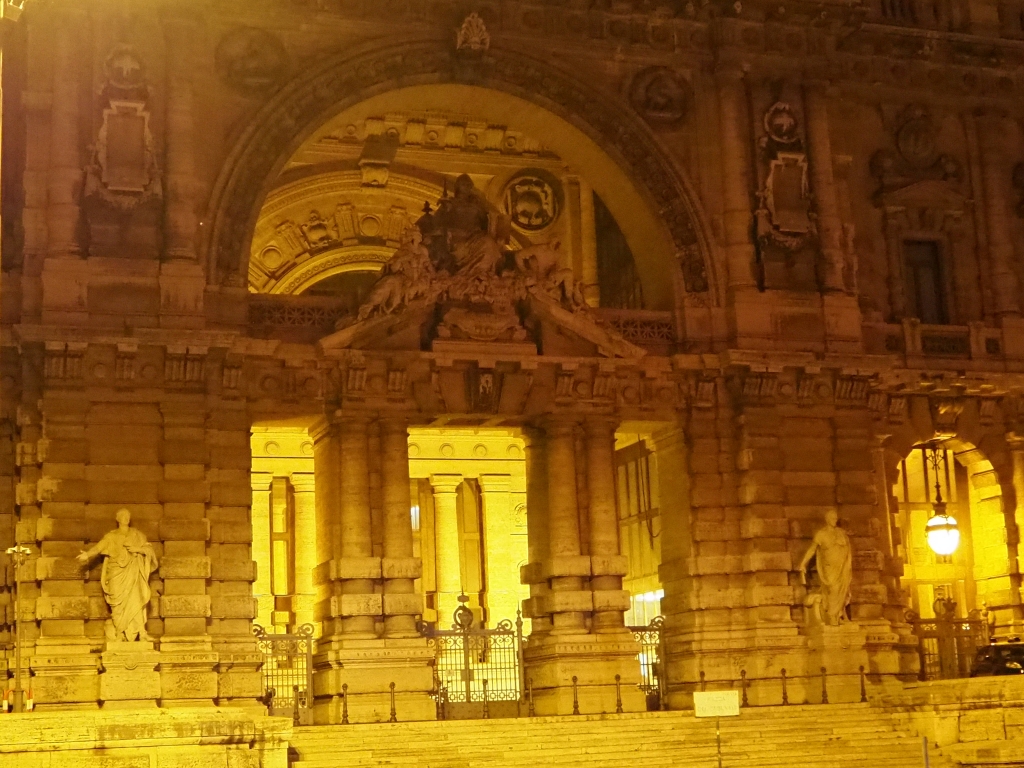 What comes next is the Roman Court House called by locals the Palazzacho (I already explained the “cho”) – an overly lavish huge Renaissance building in a French style on the banks of river Tiber which was never used until recently die to being flooded by the waters of the same Tiber right after its construction. Probably the locals saw a certain irony in that. Our tour passes by the palace of Saint Angelo which had a totally different name until one pope had a vision just in front of it telling him that the plague which devastated the city for months would end in three days. When that happened (though I can’t possibly fathom how they decided it was exactly in three days), the palace was renamed after the holy angel.

From there, we emerge directly at one of the entrances to the Vatican, that at the square of Saint Paul with the basilica bearing the same name which is also the biggest one in Rome – and that does mean something. We are told of Bernini’s love for simplicity showing in the four-lined colonnade surrounding the square, with 3 meters-high statues of saints on top. The simplicity thing might sound a bit strange before one compares the colonnade with the basilica itself. We tip Arianna much more than initially intended as the other participants in our night tour of Rome magically disappear before the end, and the lady did quite a lot for our entertainment that evening. 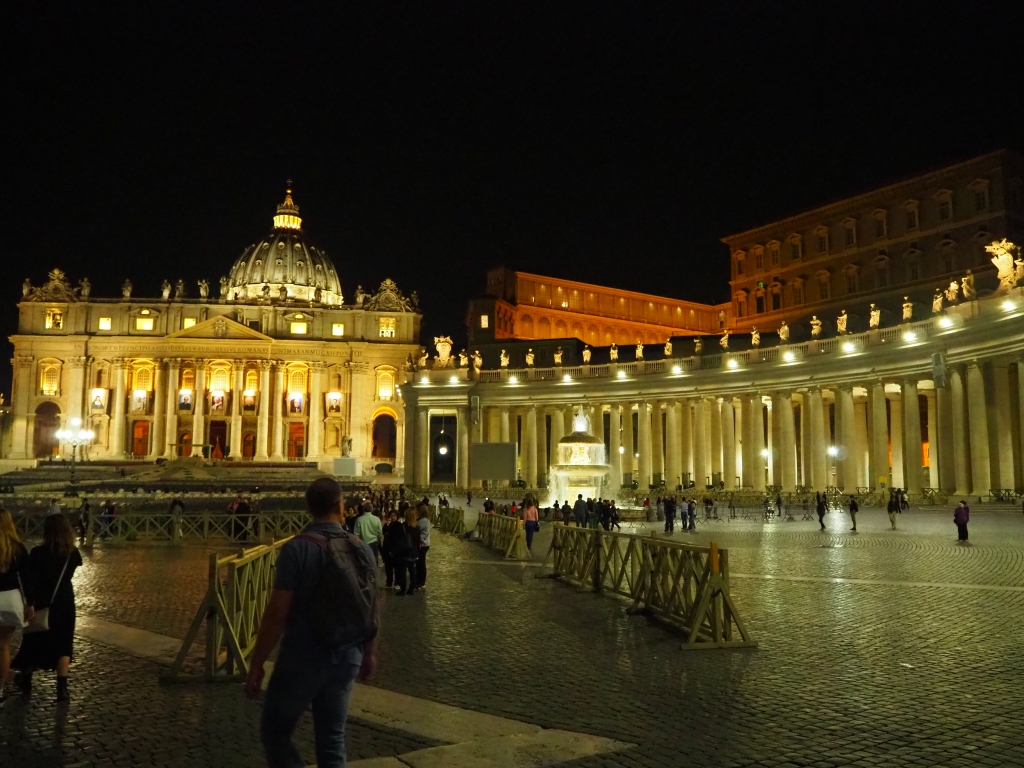 Our night tour was followed by a lot more of Rome – the most visited Renaissance sites, the National Museum of Rome, the Roman Forum and so on…