Believe it or not, all that space behind my back on the photo is practically hidden just a few steps from the transport ‘heart’ of Rome – the Termini Train Station. The expression ‘train station’ is a complete underestimation of the complexity and diversity of that transport giant. Here arrive and leave all buses to the two Roman airports – Fiumicino and Ciampino; here you can take a train to the sea coast; up is something like a central bus station and down – the metro. Wherever you want to go, Termini is your place. Going around from the back door to the main entrance alone takes about 7-8 minutes. And the neighbourhood offers even more. For example, two of the four sites of the National Museum of Rome which you can buy a combined ticket for. One is the Palazzo Massimo alle Terme which is a museum of everything, or at least that was my impression. There’s a little art, a little historical artifacts and many temporary visiting exhibitions. I cannot tell you more about it; we didn’t get in. Time is never enough in Rome. We went for the other Termini site – the Baths of Caracalla. 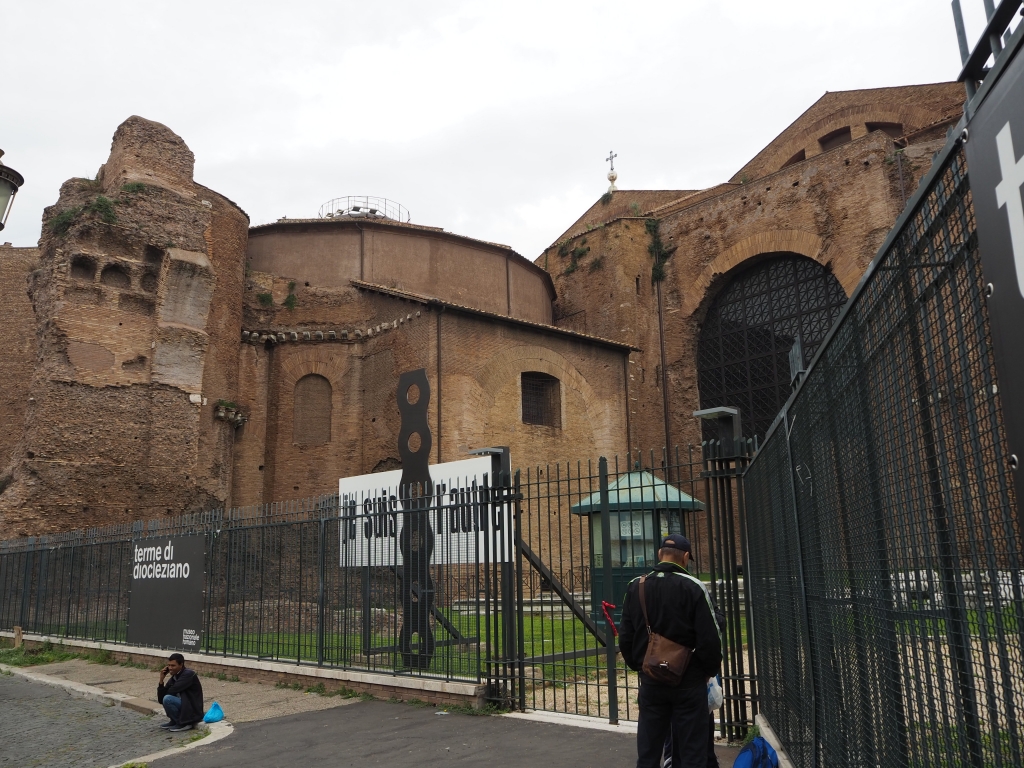 Caracalla is a Roman Emperor from the beginning of the 3rd c. AD who ruled for only 6 years but managed to fill them all in with his extravagance. The Baths in question are only one such extravagance. They were so huge that could accommodate up to 3000 people at a time. Even today, if you do not find the entrance with your first try which is very probable in the conditions of Roman information (non)provision, you are up for quite a trodding along that metal fence. And this on the photo is NOT the entrance, no matter how much we wanted it to be after the long walk. But, without any word of warning, we found the church of Santa Maria deli Angeli e dei Martiri – St. Mary of the Angels and the Martyrs. So what, we are thinking, in Rome there’s always a church nearby. This church though was built by Michelangelo who basically dismembered Caracalla’s Baths by building whatever he wanted inside. Including the church with the strange name (but then, if you have more than 900 churches as they say about Rome, you probably run out of names at some point).

This whole Michelangelo business we find colaterally as it is nowhere to be mentioned before you get there. Form the very Baths, there is little left now, so the renting of the 3D-glasses they offer at the entrance is a good idea. They are not really glasses as they project over the current remains the image of what it must have been like in the past when everything was brand new. The Baths naturally had a warm, hot and cold part, dressing rooms and even a library. They also had a huge swimming pool, now partially occupied by Michelangelo’s constructions. This is what you can now see from the pool – 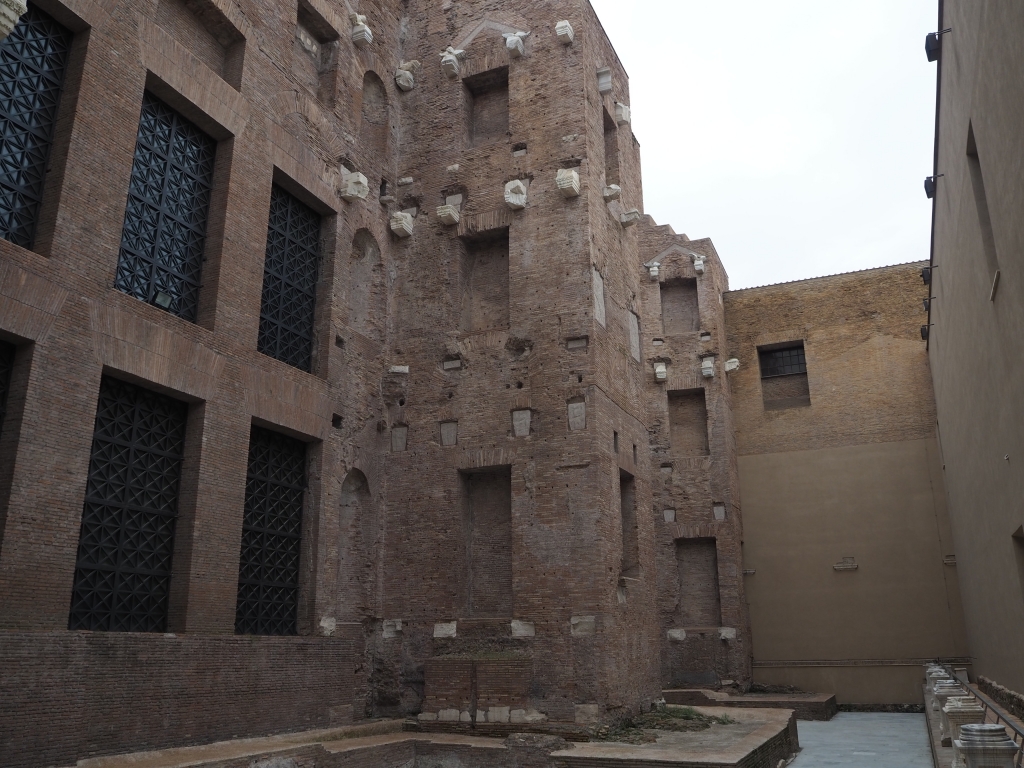 To the right is the later ‘invader’, and to the left – the original pool-side wall. The holes in it show that there was a paneling once, and in the niches there were statues meant to please the swimmers. On your way out, you see modest little signs announcing the Small and the Big Yards of Michelangelo, without further explanation. We decide to take a look just to check the yards in our list and be sure not to miss something. The Small Yard is not so small, not very impressive, with lines of sculptures exibited under the arcades and almost no people. A new sense in Rome, quite pleasant. 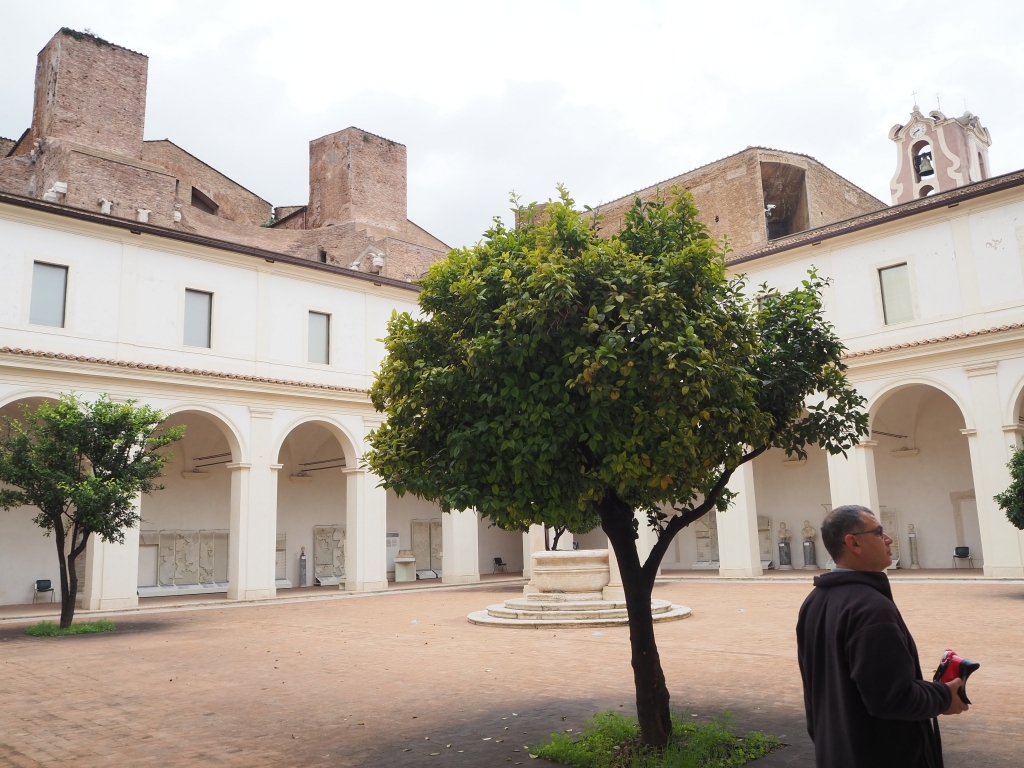 The Big Yard, however, is a surprise. Apart from being really big, it is also very beautiful or at least this is how I see it. Under the arcades stand rows of statues again, and the middle is taken by a green garden with casually scattered huge blocks from some ancient construction, column tops, stone bull heads and more of the kind. And the most stunning is that the whole floor above the arcades circling the Big Yard is actually a museum full of amazing things. For which you have no warning whatsoever. And of course, you are unprepared as you have not included it in your time schedule for the day. This is probably something only Romans can afford; in a city full of so much history and of so much global importance, they don’t even bother to announce the less significant pieces. This is what the Big Yard looks like from the museum floor – 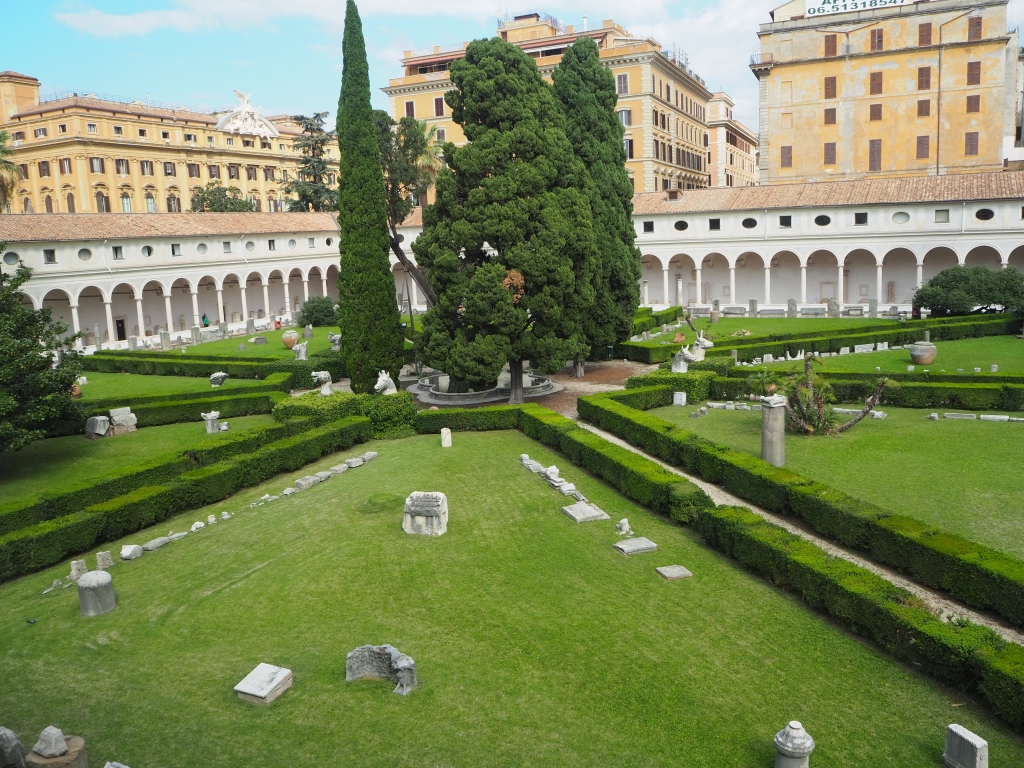 almost fully hidden from the tourist flows. And, speaking of hidden things, we should mention here the third of the four sites of the National Museum of Rome (I will say nothing about the fourth site, we didn’t manage that either) – the Crypta Balbi. The name absolutely doesn’t explain the site as ‘crypta’ is not used in the sense of an underground church tomb but a three-storey side wing to an old theatre (?!). Balbi, on the other hand, is the name of the next family of rich people who used to have a modest palazzo on the spot. The site today has several floors, two of which underground, and says nothing apart from the fact that Rome was built over Rome. I mean, there is no meaningful information although the upper floor contains two rooms of sketches made by some students. There is also an exhibition of finds from the different periods or layers, which we again know nothing about until we find ourselves into it. We manage to grasp that the place used to be a theatre but also a glass workshop, a storeroom and many other things. Since we have not assigned time for proper exploration of the site, we learn nothing more about it. 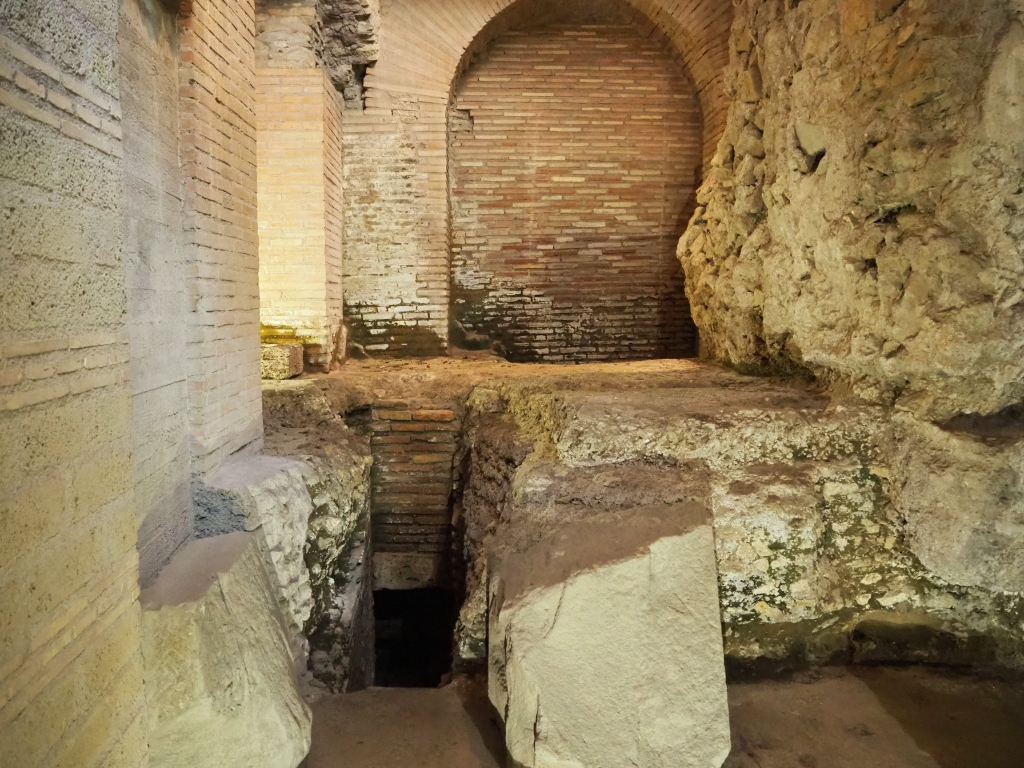 I’d very much like to think that I will find some time in the coming years to return to Rome and see all obviously less important things that Romans have hidden from the masses at their National Museum of Rome. Especially the museum in the Big Michelagelo Yard. The jogging through it showed me that they have exhibited finds from the pre-Roman times of the Seven Hills, even from the civilizations of the Etruscans that we know very little about. Only that they used to be the closest neighbours and friends of Rome until the Romans decided to become an empire and ate them. There were also many other curious things some of which I only managed to catch briefly on my camera. Such is, for instance, this dismembered metal book of spells, obviously the desk-guidebook of some local witch. Who knows what other interesting things I missed. Well, maybe next time… 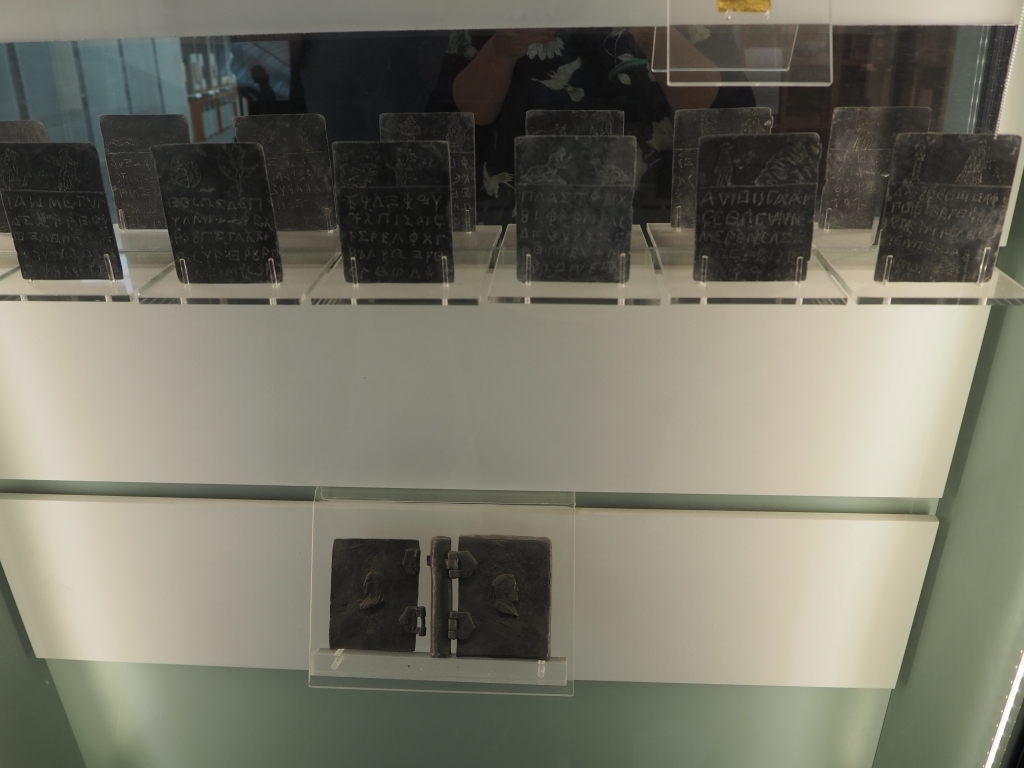 Post Scriptum to the article, a few hours later. Thank you to all vigilant Rome-fans who notices that the baths are not those of Caracalla but of Diocletian who ruled at the end of the 3rd c. AD and also was very inclined towards extravagance. I promise to show the real Baths of Caracalla next time.