The Navel of Rome

Home/Europe/The Navel of Rome
Previous Next

The Navel of Rome

It is not the Colosseum as you may wrongly conclude from the intro photo chosen by me, and it is not even something pompous compared to all the eruptions of grandeur offered to us by the Roman Empire. I simply couldn’t help but embroider my own little photo on my own grandiose background. Otherwise, the Navel looks totally unnoticeable and can easily be neglected with its tiny jagged sign. The sign itself tries to prompt of some grandeur as it says not “The Navel of Rome” but the “Navel of the World” (Umbilicus Urbis) but it is so pressed among numerous other remains in the Roman Forum; and many of the latter ARE grandiose. So, there is your Navel – 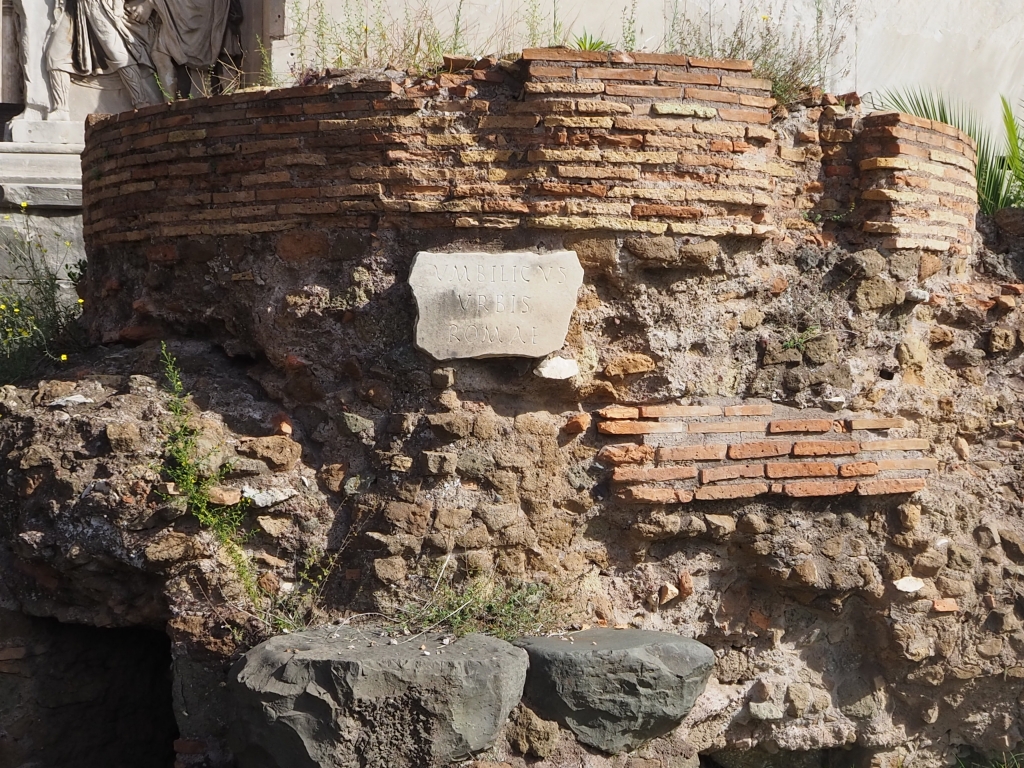 It is probably good to explain what exactly is the Roman Forum. The Forum in ancient Rome was the central town square, the heir of the Hellenic Agora. Logically, the Roman Forum is the central square of ancient Rome. It is located right below the so-called Emperor’s Hill or the Palatine which has given its name to the modern word of ‘palace’ available in so many languages. The Palatine is the home of ancient-Roman grands and even of some more late-Roman ones, as you often see Renaissance works of pretension on top of the older ruins. I showed you one such work in my previous post, whose ceiling was painted by Raphael; here is another one, currently closed for visitors but also beautifully painted from the inside, with its own (though not working now) founain on front, and with a great location! 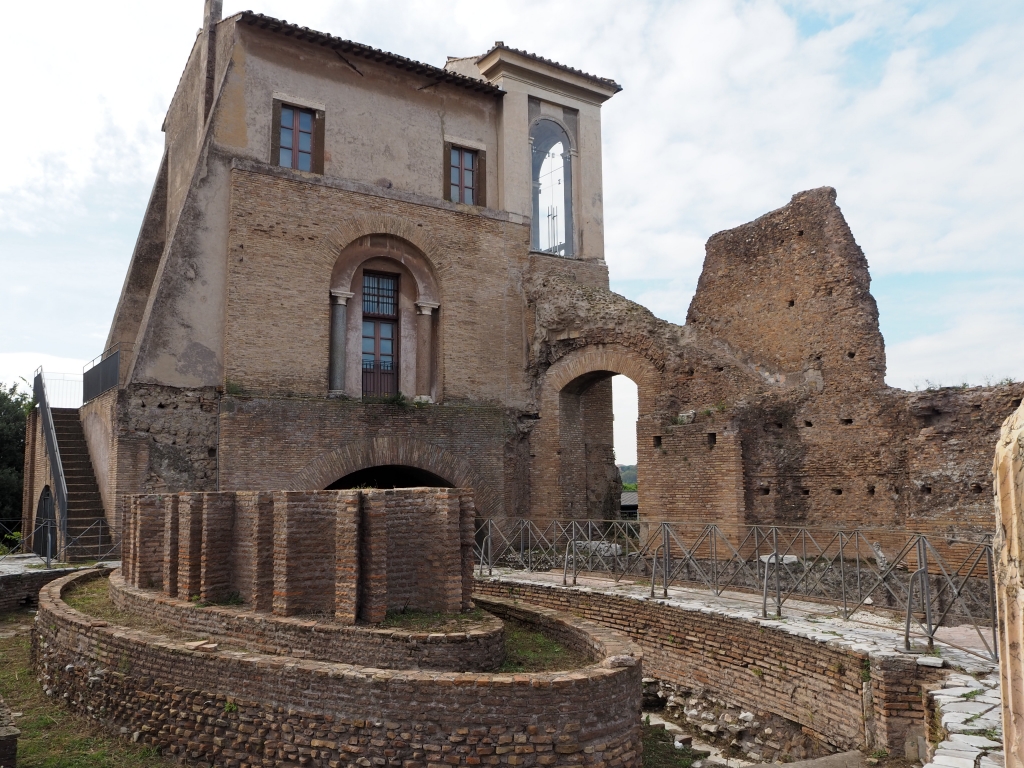 Modern-day Rome keeps parts of several other Forums built by other emperors, each of whom obviously wanted to be remembered by their own explosion of grandeur. There are Forums of Caesar, Vespasian, Trajan, Augustus and others which you may easily miss in the general chaos of ruins and lack of signage. I am writing all this as it remains a complete mystery to me how can one have such a priceless treasure and not even bother to mark the entrance to the Roman Forum and the Palatine. I can tell you that we found that entrance by pure accident; we could have easily trotted around the fence for hours! Here I post a photo from the Forum of Trajan and I am almost sure it shows the semi-circular by-square shops: 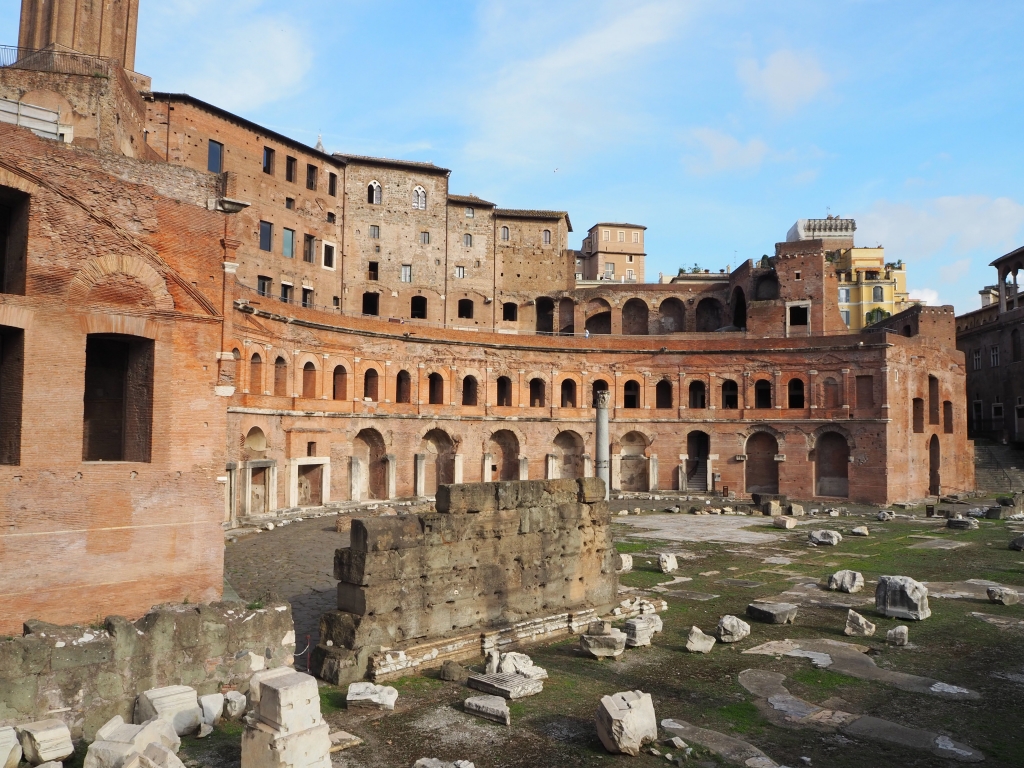 Speaking of grandeur, I cannot miss to share something that blew my mind away. For example, what would you do if you wanted to build yourself a palace on the Palatine but those before you had already taken the whole hill? Me personally, I see two options: (a) I demolish everything and build my own stuff on top; (b) I move the Navel of Rome to a free location and start building there at ease. Obviously, I am not thinking like a Roman. There is Emperor Maxentius, a true Roman, who solved the problem in another way – he simply constructed some additional hill in order to expand the building site. He made a huge stone construction of arcades on several floors adjacent to the existing hill and voila – 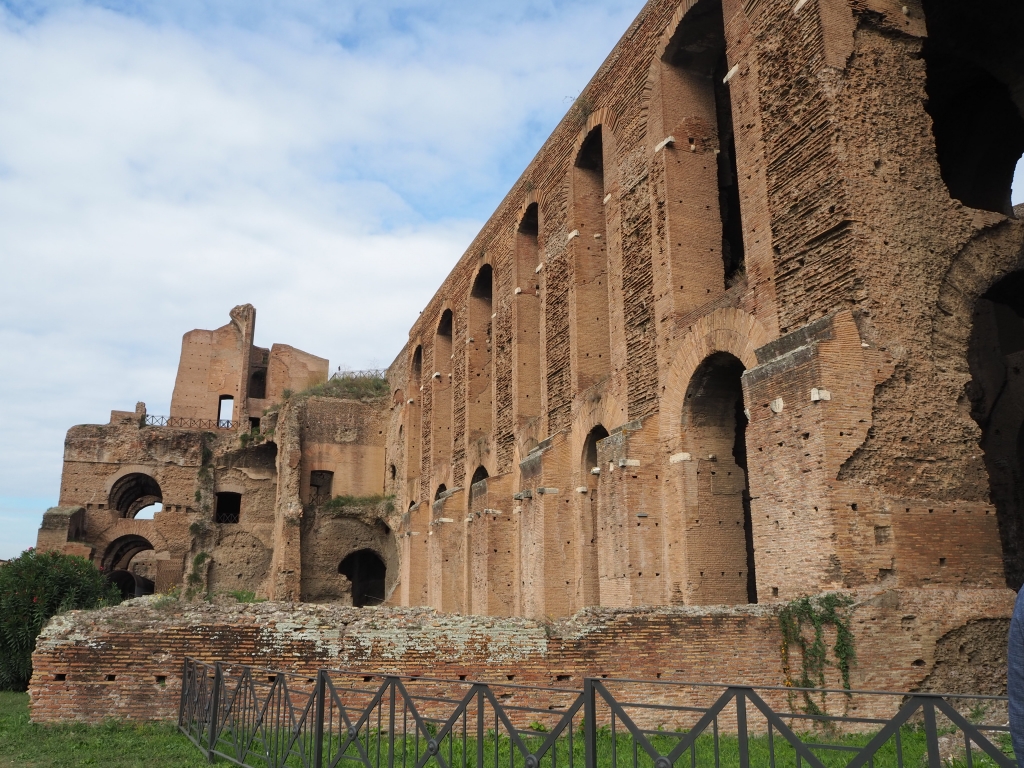 If you stand by the small fence up there at the back, you may never realize that the natural hill has ended and you are now stepping on a man-made construction. So, what else could I share with you about the center of the amazing Empire? I cannot say if the hiring of a private guide would help you to navigate better through the chaos of information gaps; I didn’t feel like paying extra money as Roman guides are costly. We tried the land-only option and the renting of an audio-guide, both of which didn’t help. Of course, you may decide to read books about Rome at home and to spend your time on the spot only walking around and breathing the atmosphere in. A lot of people around us were doing just that. One obligatory stop for taking that atmosphere in and, naturally, photos is the large terrace at the rim of the Palatine, offering wonderful views of the Roman Forum. There it is:

At the background, you may see the birdies on the Altar of Victory which I mentioned in my previous posts; in front of it, there is a later Senate built over the old arcades of the Forum; still closer are the remains from the colonnades of various temples dedicated to members of the Roman Pantheon of dieties. At a more or less central position, you can see the white Victory Arch of Emperor Constantine who brought Christianity to the Roman Empire and actually caused its splitting into Western and Eastern parts; he gave his name for many centuries to the capital of the Eastern Roman Empire – Constantinople or today’s Istanbul. To the right of the Arch, there is a boring brick cube of a building – but before you pass it by, I will tell you that it was there, in the Old Senate building where some senators stabbed some Julius Caesar 23 times to his death. Every little stone here tells a big story. Of course, big stones also tell big stories as we see from the most famous building in Rome – round, on 4 floors, semi-fallen on one side but with a movable roof in the past to keep spectators from the rain and with lions and tigers living in the basement. You know what I speak of, and here I leave you till the next time – 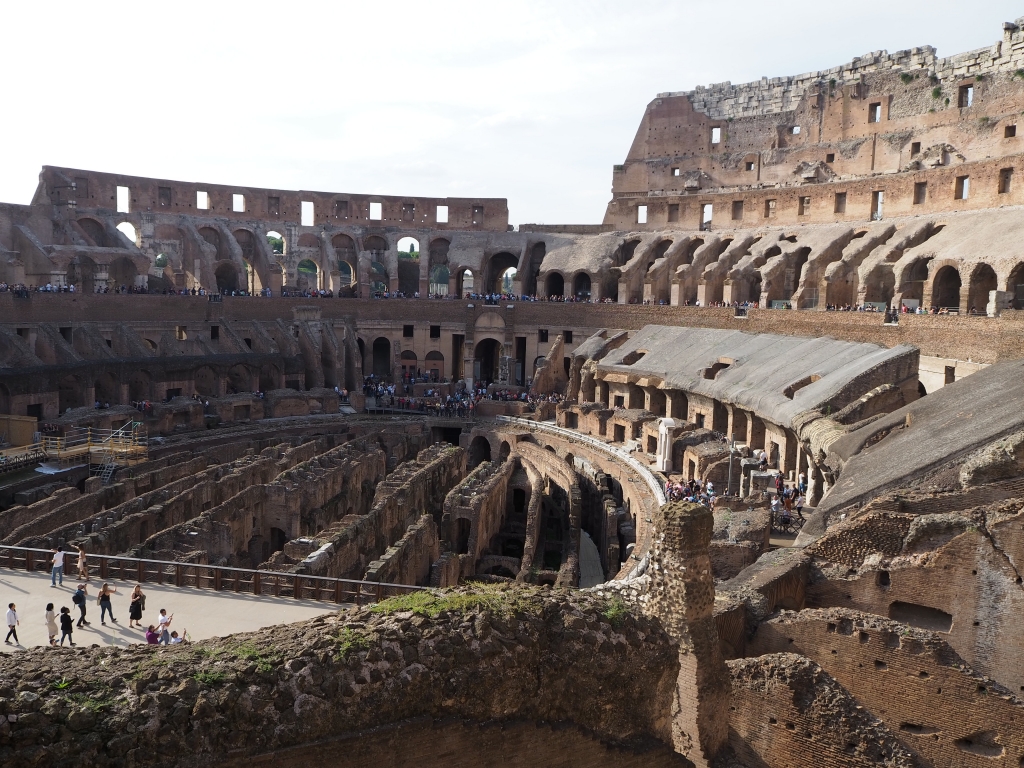 If you liked my tour of the Roman Forum, you may also visit the ancient highway Via Appia Antica, the sea-port of Ostia Antica and the villa of Emperor Hadrian.