Home/Europe/Is it appropriate?
Previous Next

The story of a travel to Villa Adriana in Tivoli.

I wondered for some time whether it was too cruel to continue to write about travel in case we are all locked up at home. That all reservations we’ve made for the first half of the year will probably get lost, and we’ll even lose our money. That no one has an idea yet of how or when the ‘normal’ connections, habits and opportunities will be restored. And what will be ‘normal’ at all… On the other hand, my travel stories and those of my fellow travel maniacs are also – or at least we hope so – an interesting piece of reading. Aren’t we advised to read more while stuck at home?

So, I decided to tell you today about a favourite place of mine in Italy. I haven’t been in China yet, to my regret, or I would be telling stories about it too. I’d really like to see those places as a source of something nice and beautiful and not only the terrible news we’ve been getting lately. Is this appropriate? I don’t know, let everyone decide for themselves. 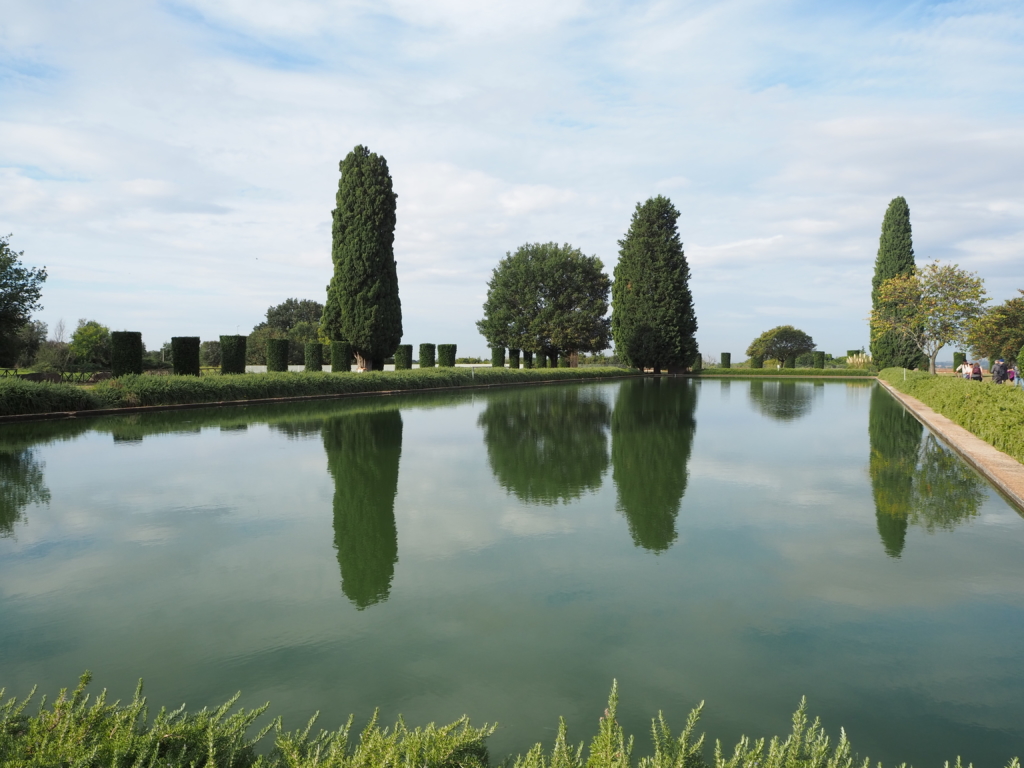 The vila of Emperor Hadrian or Villa Adriana as you’ll find it in Italian sources, is located not far from Rome and is easy to reach by public transport. It is good if you sacrifice some of your honestly earned sleeping time in the morning and catch an early bus as the term ‘villa’ in this case does not quite answer our views. As a matter of fact, I am not sure it answers anyone’s views except those of Hadrian himself who was an extravagant and at the same time an extraordinary person. The size of Villa Adriana is 1 square kilometer!

The first thing that welcomes you after you enter the surrounding walls is the soothing view on the above photo. In order to achieve that, Hadrian had to build an addition to the totally insufficient hill he had on spot. I’ll show you later how. It has to be noted that the idea of the pond originally was not to welcome the guests as the official entrance was elsewhere. The idea was to offer the full notabilities a place to walk their lavish lunches around, as per the Roman tradition.

Right next to the pond is the so-called Hall of Philosophers – a place for debates and poetry. We know that when we see so many and so regular halls on the walls, this means there was a decoration which got taken or fell off during the centuries. According to various sources, the decoration of this exact project of Hadrian was simply breath-taking but unfortunately not much of it remains today.

We can, however, get an idea of the architecture that is said to be the work of Hadrian himself. He turned out also to be a talanted and visionery architect of his time which can be seen from another of his projects – the Pantheon of Rome. One of the visionery architectural decisions in Villa Adriana are the private chambers of the Emperor set on a circular island surrounded by a circular water canal and circular walls. 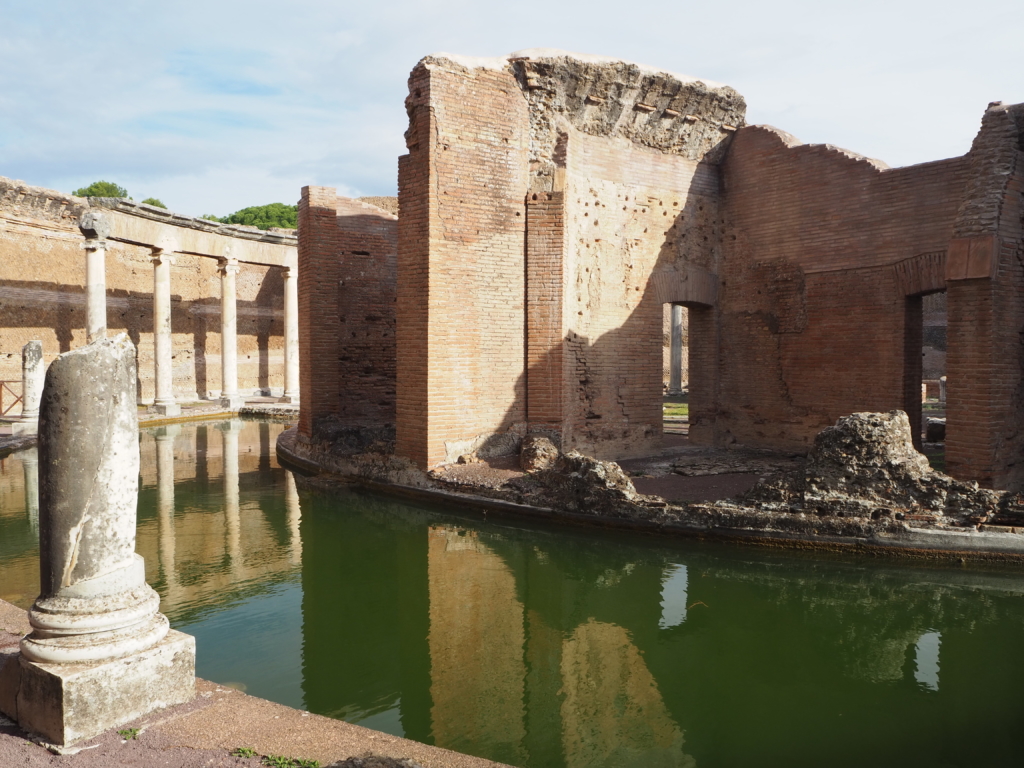 Passing by these modest chambers, you could reach the so-called Yard of Libraries – a spacious rectangular grassy spot with various interesting buildings along the perimeter. As the name shows, some of these buildings were libraries. Signs have been put on the Greek and Latin ones. The first was at least three floors high which are still visible. The second one was probably no less impresive.

On the other side of the Yard is the so-called Horarium or the local hostel. It has a long internal corridor with the sleeping premises lined along the two sides and a temple with niches for the appropriate gods at the far side. The rooms are small and square, accommodating three persons; the door is one side and here are niches for beds on the other three. These were for the guards and also for less important guests. It has to be noted that floor mosaics are well-preserved and though they are monochrome (only in black and white), as suits the less significant members of society, each room is different, as well as the corridor and the temple. 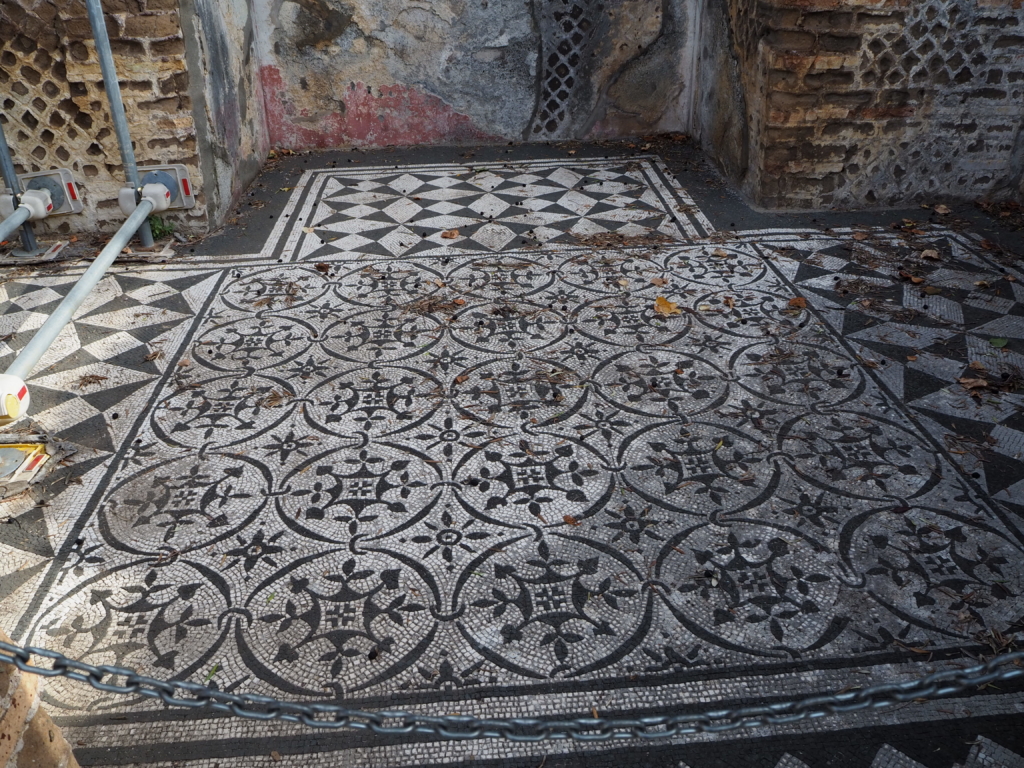 Through the Yard of Libraries, you may enter the square in front of the Emperor’s Palace. The more intersting thing, however, is to be found behind that palace, and that is the so-called Golden Yard. You can easily miss its entrance as from the outside it is just like any other arch-gate. The truth is, there is not much left inside either but you still can get an idea of the former magnificence. TChe name of that yard comes from the numerous golden statues which decorated all buildings along the perimeter. The purpose of those buildings is not very clear, probably some rest pavillions again but to my greatest satisfaction, with some complex floor mosaics still remaining gere and there.

What you can see in the Yard are the remains of garden planning – alleys, flower beds and water canals; and the inner side of the gate shows why it is considered another of the architectural wonders of Villa Adriana. The sophisticated construction of the cupola with the wall niches for the gods was something unseen at the time. 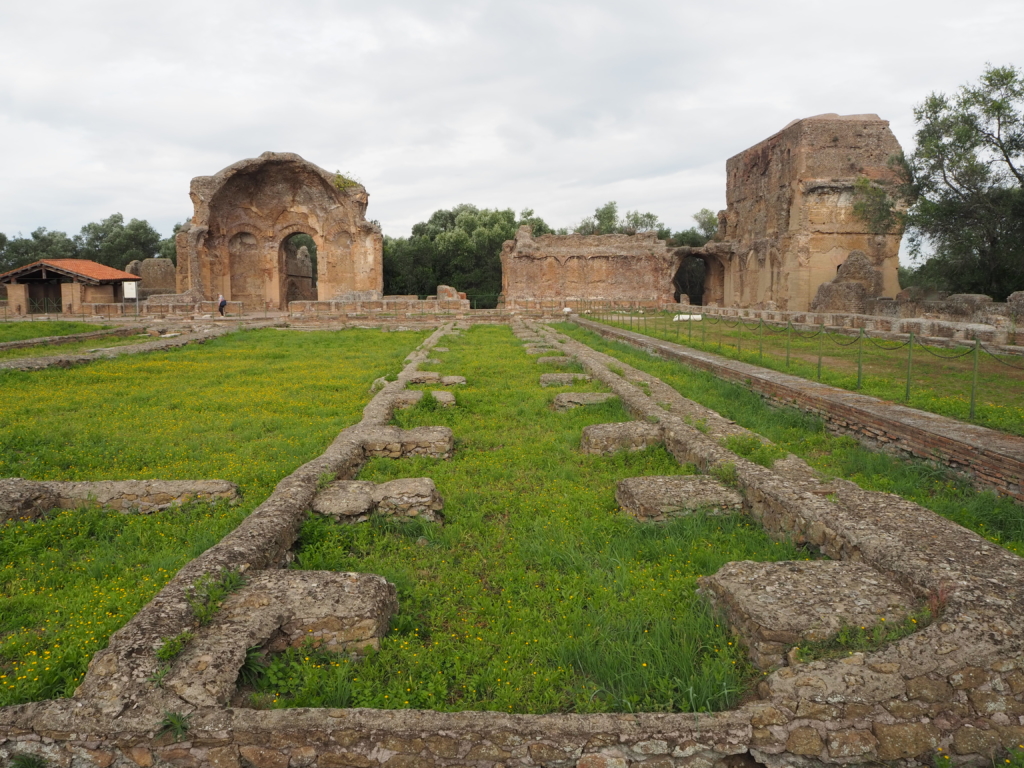 And, speaking of innovative architectural approaches, there is another one on the photo below. Its name was probably given by some relatives of the Terry Pratchet character – the genius engineer and inventor Leonard of Quirm – whose genius disappeared abruptly when it came to naming his otherwise unique inventions. So, this part of Villa Adriana has the ingenious name of The Room with the Pool, without an explanation what possible purpose it served.

There is definitely a pool in the middle, and a large one. Around it, you may see a low wall pierced by holes – there passes the underground corridor surrounding the construction. It is possible that they somehow lighted fires in there in order to keep the pool water warm. But that is just a guess. 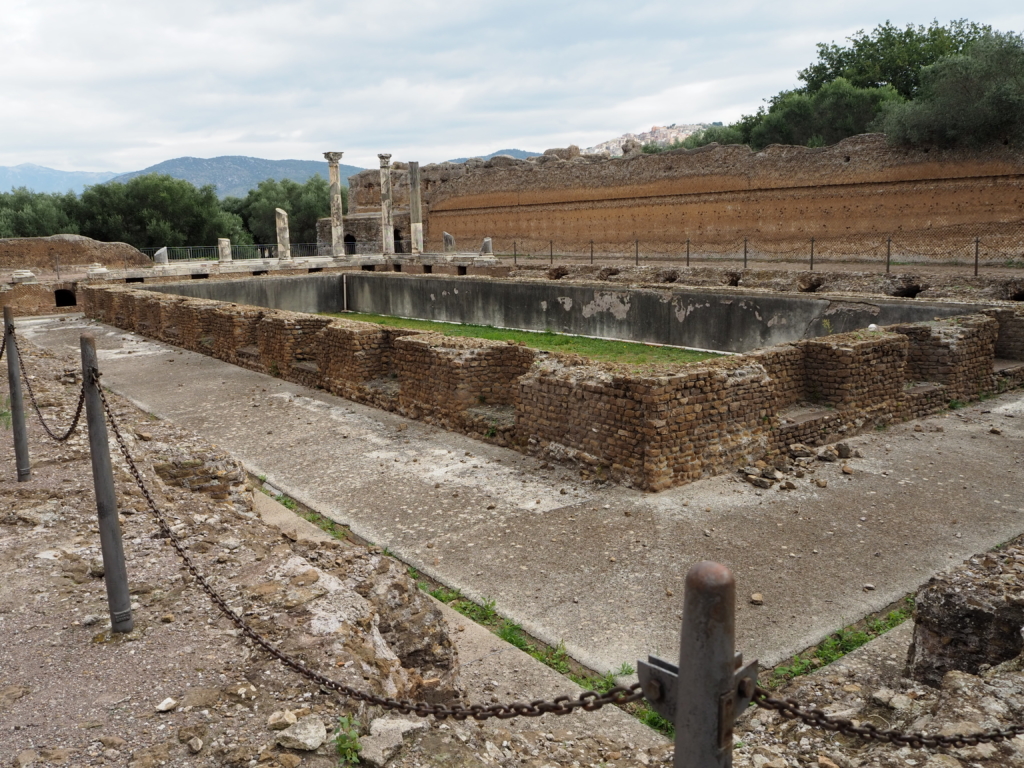 There is much more to see in Villa Adriana. I will however restrain myself to showing the most famous view of it, and that is the Big Pool. It used to be lined by an arcade of statues of gods and heroes, few of which have reached the present day. Those still standing by it are replicas, by the way; the originals have been stored in the small museum at the site. For me, this fact didn’t affect the charm of the place at all, especially when I saw its other end, with the small VIP banquet room viewing the pond. I assume the food used to be served on floating trays on the curved canals. And probably eaten on one thigh. 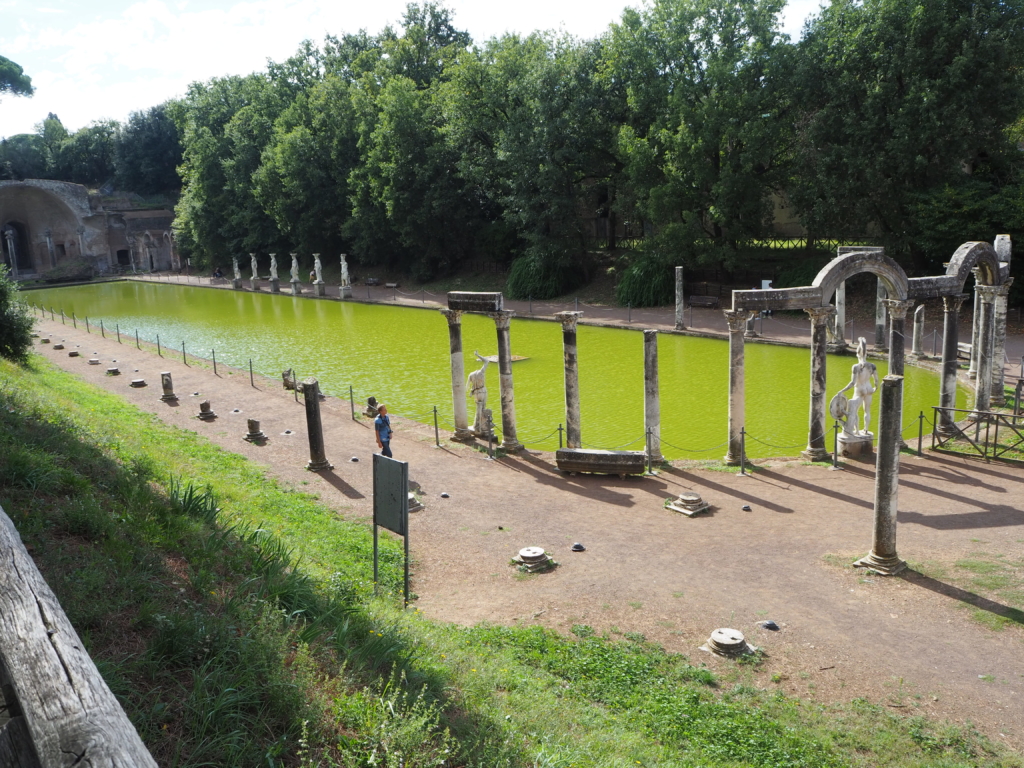 I promised at the beginning that I would show how exactly Hadrian secured himself additional space for the post-lunch by-pool walking alley. I mentioned he did not hesitate at all but built an addition to the existing hill in order to expand the flat area on its top. And now that you know how clever he was, I’m sure you will not assume that he just piled some dirt on the side. No, he literally constructed a three-storey building ‘glued’ to the hill and accommodated the servants in the miniature rooms. It is called The Wall of 100 Rooms and was probably a miserable place to live in, despite the poetic name.

The last photo below shows not only some of those 100 rooms with the pond on top but also what the parade entrance to Villa Adriana looked like. The ‘parade’ guests were obviously not expected to arrive on foot but rather by chariots, so the entrance is actually a small hippodrome and a chariot parking lot. A wonderful view for the servants stuck in the narrow 100 rooms, don’t you think? 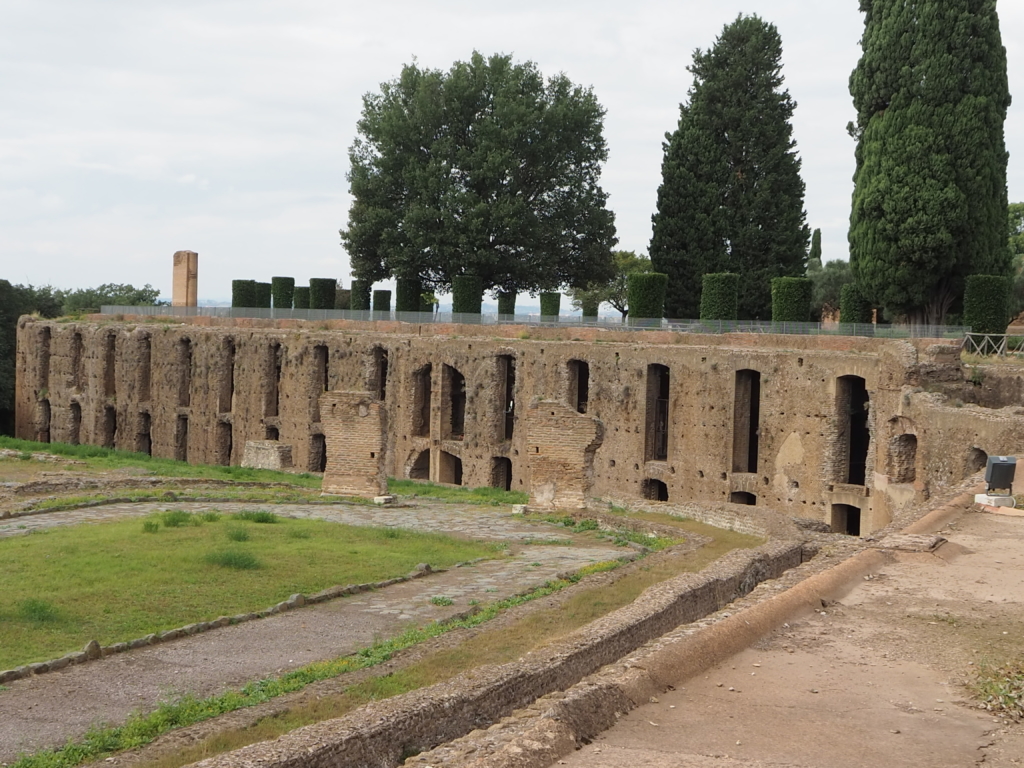