The sea gate of Rome

The sea gate of Rome

Everyone knows that Rome is located not on the sea but on the river Tiber. The latter leads eventually to the sea but some 25 kilometers later. About seven centuries BC, the kilometers were 20-ish only the silt of Tiber have filled them in since then. At the end of those kilometers, right next to the mouth of the river, the fourth Roman king built himself a port sometime close, or so legends claim. And yes, Rome had kings before it had senators and then emperors. The port of Ostia, as it becomes clear now, is today about 3 km into the mainland and is called Ostia Antica, not to be confused with the modern nearby town bearing the same name. The old settlement has not been uncovered or exhibited fully but nonetheless one day is hardly enough to see it properly if you are history junkies. 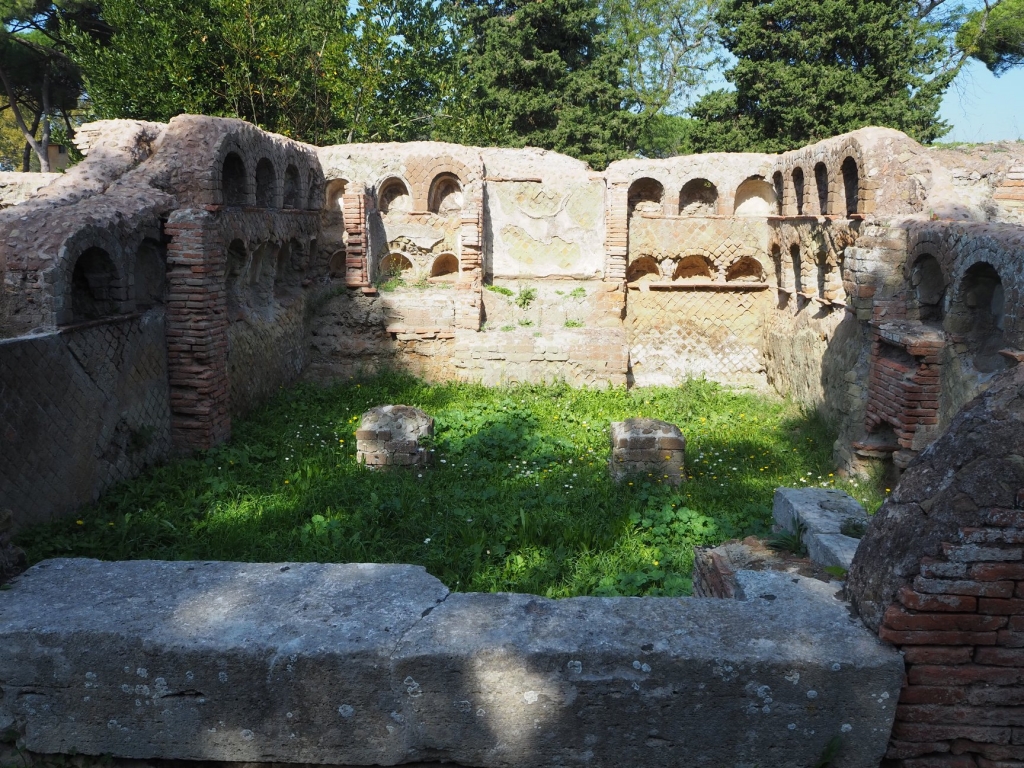 From Rome, there is a regular train line to the sea with a special stop for Ostia Antica. I advise you to travel as early as possible and on a working day if possible. I also advise bringing your own sandwiches, water, sun hat and sun glasses, sun screen lotion and a spare pair of legs. The first thing you see when entering from the official gate of the site is the old graveyard or the necropolis. As visible from the photo above, here too the division of poor and richer is in force and some grave spots are prettier than others. Streets follow, plus squares, quarters of more modest houses and grand residences, the obligatory amphitheater, public buildings and baths. To my greatest delight – a lot of preserved mosaics too. 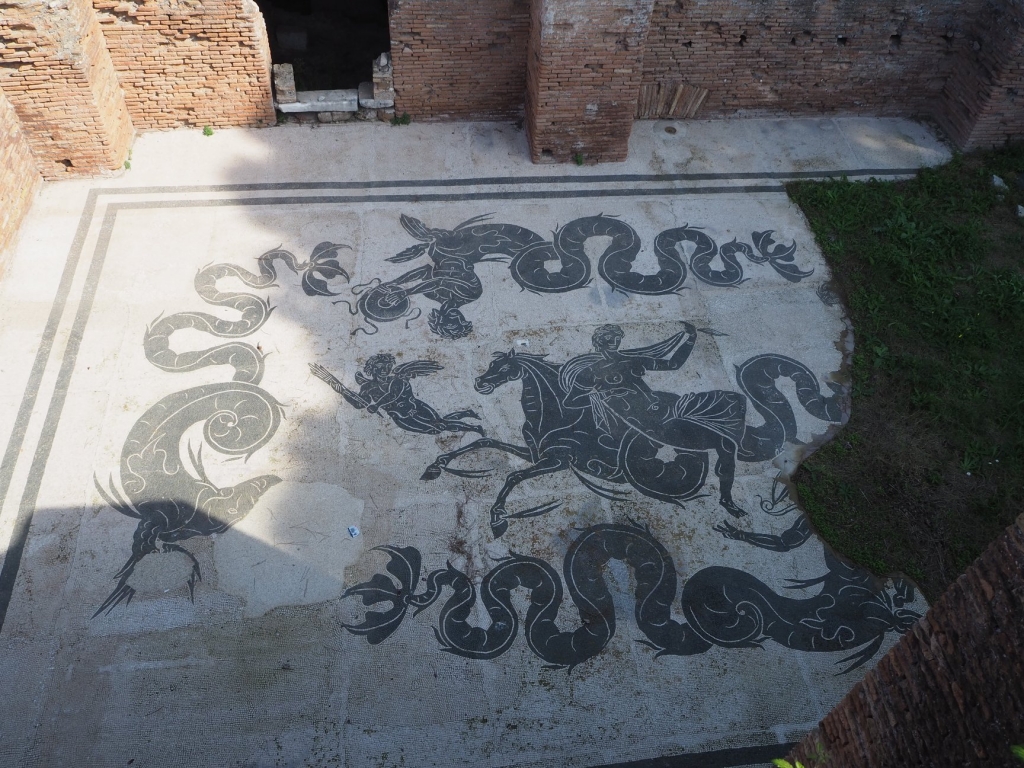 This particular mosaic lays on the floor of one the premises in the largest city baths. It is usual to have monochrome mosaics in places meant for the ordinary people; actually, I don’t know why they are called monochrome if they are two-chrome – black and white. I was saying, the ancient artists might have not been very diligent with the colours but they have done excellent job with the design. And speaking of internal decorations, another favourite heritage of mine, apart from mosaics, are the bright murals. In Ostia Antica, these sometimes stand ‘in-situ’ or in their original place but there they have faded due to meteorology. The best-preserved ones are stored in a special hall at the end of the city which regrettably stays locked most of the time. Through the windows, you can see this: 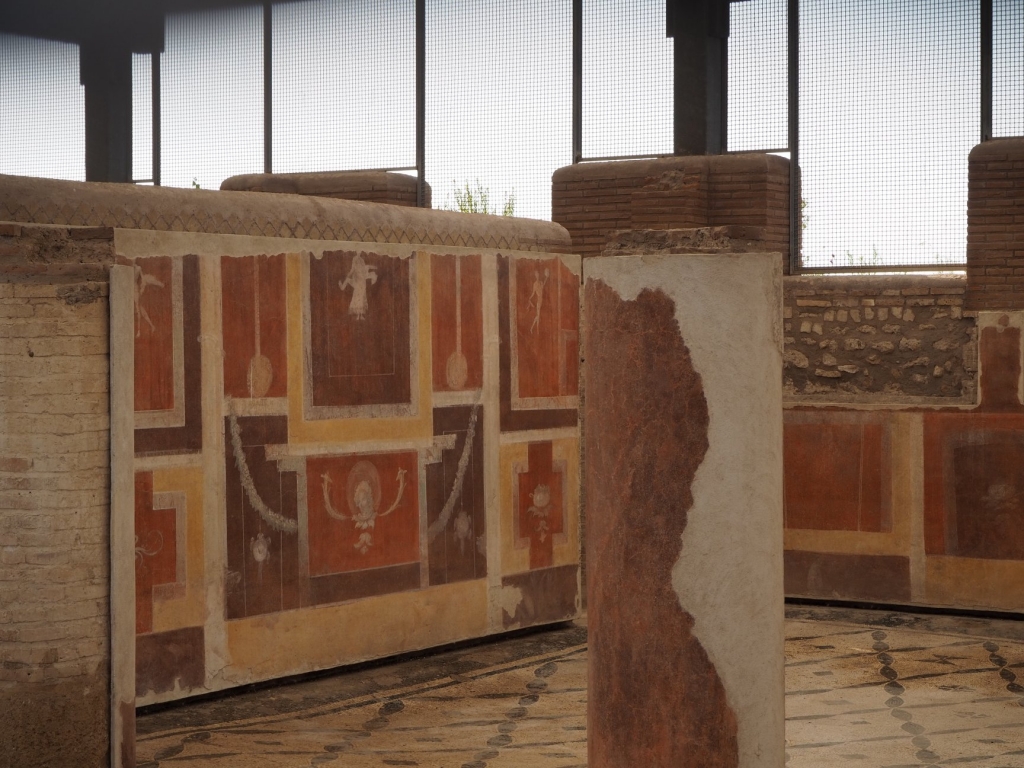 And further on the topic of Roman decorations, equally charming I find the marble paneling on floors and walls. Especially the poly-chrome or the more colourful ones. Speaking of which, you must visit the so-called ‘home’ of Cupid and Psyche which is actually the home of the statue of these two characters that was found on the spot. Interesting tribe archaeologists are, and the way they tend to name things. Take Pompeii for example, don’t you think that the so-called House of Menander is the home of a Pompeian citizen named Menander; nothing of the kind – this is only a house where the ancient Hellenic playwright Menander who lived many miles away from there was depicted on a wall. But I got carried away, here are some marble decorations from Ostia Antica: 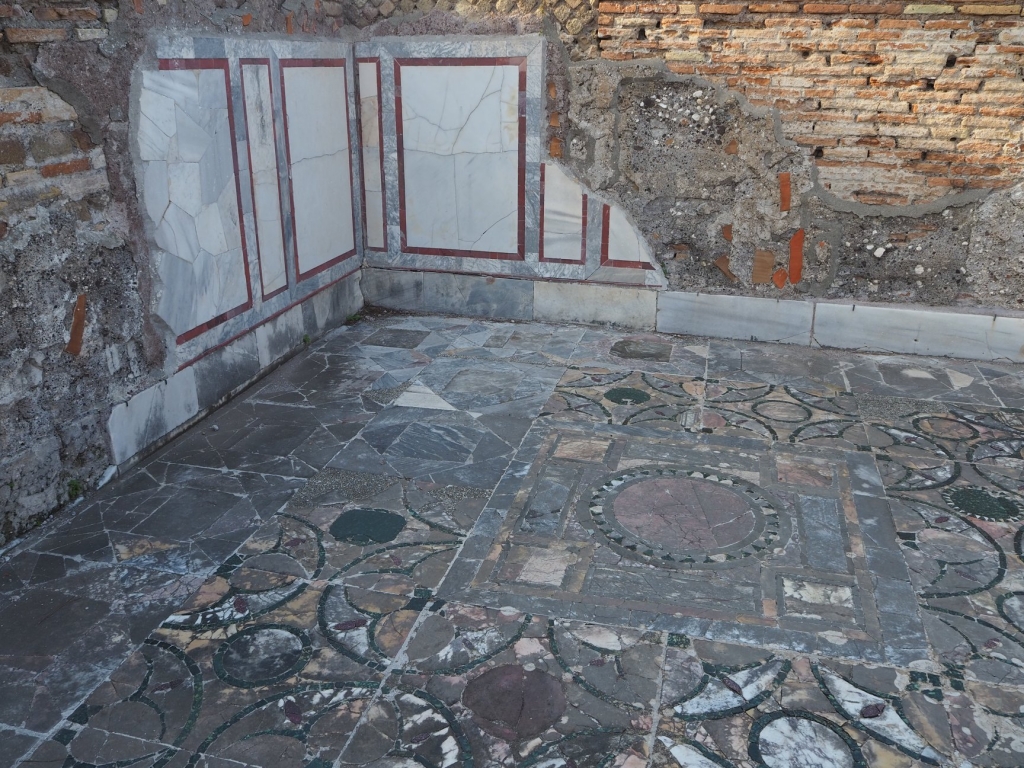 As the above-mentioned statue of Cupid and Psyche is one of the most multiplied images of the site, I feel tempted to say a few more words about it. According to legend, Psyche was a mortal maiden, so beautiful that the Goddess of love and beauty Venus felt irritated and sent her son Cupid to hit her with one of his arrows and make her fall in love with some foul creature. He, however, fell in love with her himself and, as it suits a real legend, this led to many trials before the two got happily together. The statue from Ostia is a bit naïve for my taste but if they have decided to use it as a symbol, who am I to argue. 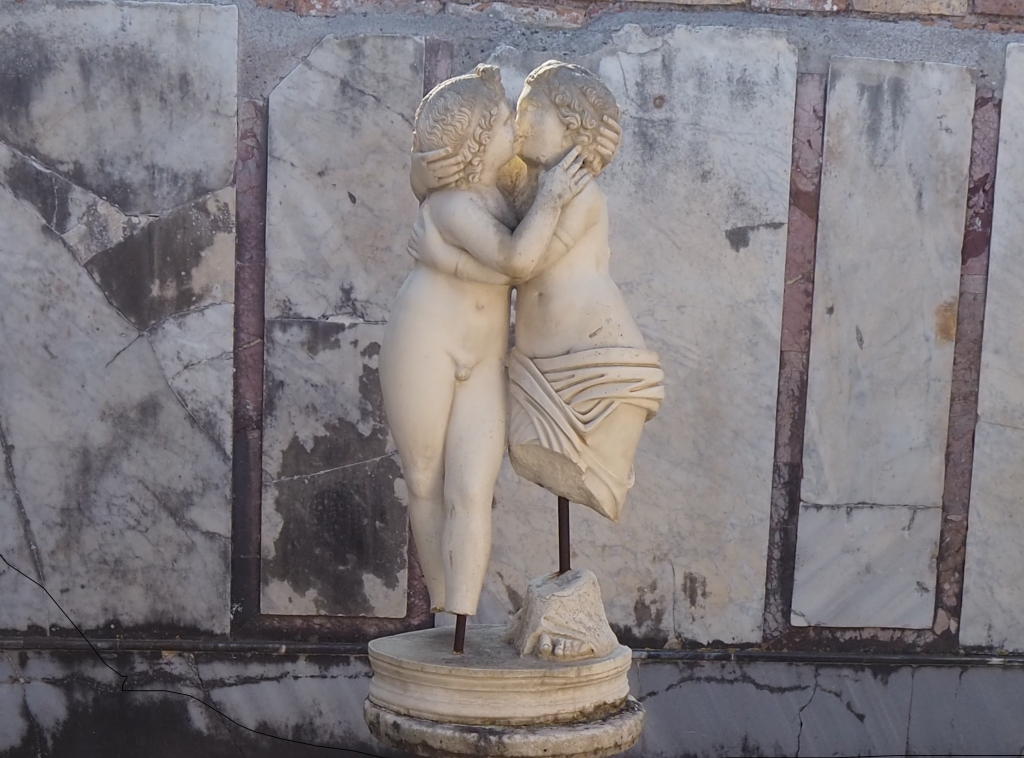 There are many more amazing things to discover when you visit Ostia Antica. You can see how they, like in Rome itself, put buildings over buildings and later walls can be seen in the middle of earlier rooms with lovely mosaics. You can see home toilets with marble seats and home altar niches with stone and clay decorations. You can also see the numerous store-houses close to the old harbor, how it should be in a proper trade center. Naturally, the fish market was also located there, close to the sea, and you can see the marble stands with stone basins for the ‘stock’:

It is impossible to show the whole of Ostia Antica in one short article. As a finale, I choose to show you what an ancient ‘industrial’ mill looked like. This one is located close to the city’s grain store and it had several rooms, each containing a number of simultaneously operating stone grinders. As seen from the photo below, every grinder had two parts and the upper one had holes for wooden poles which were used to rotate it over the lower and grind the wheat. If you have something like 20 such devices and enough slaves to rotate them, there you get a large enterprise in ancient standards. The rest I wish you to go and see for yourselves when you visit Ostia Antica! 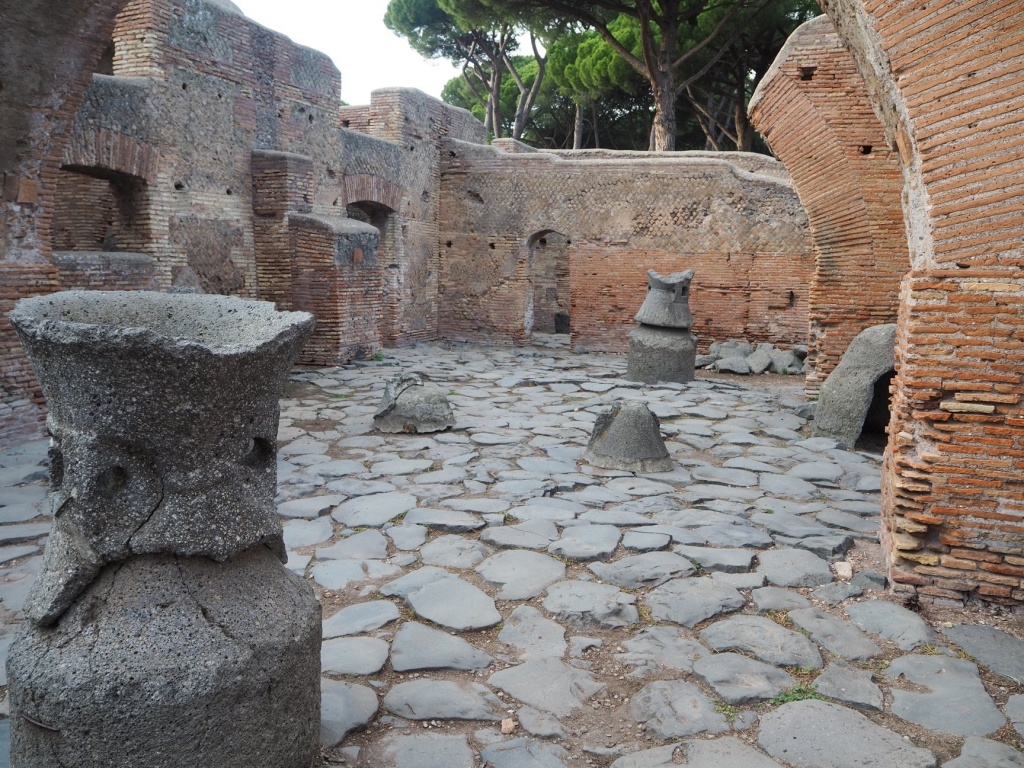