A Boiling Day in Kahta

A Boiling Day in Kahta

Kahta is one of 9 regions – we would call them municipalities – in the Turkish province (or district) of Adyaman. Many people consider it the most important region of all, and the locals are fully convinced of this.  The reason may or may not have something to do with the fact that it hosts the most valuable site of the entire area, the first to be protected by UNESCO in southeastern Anatolia. This is what I’m talking about: 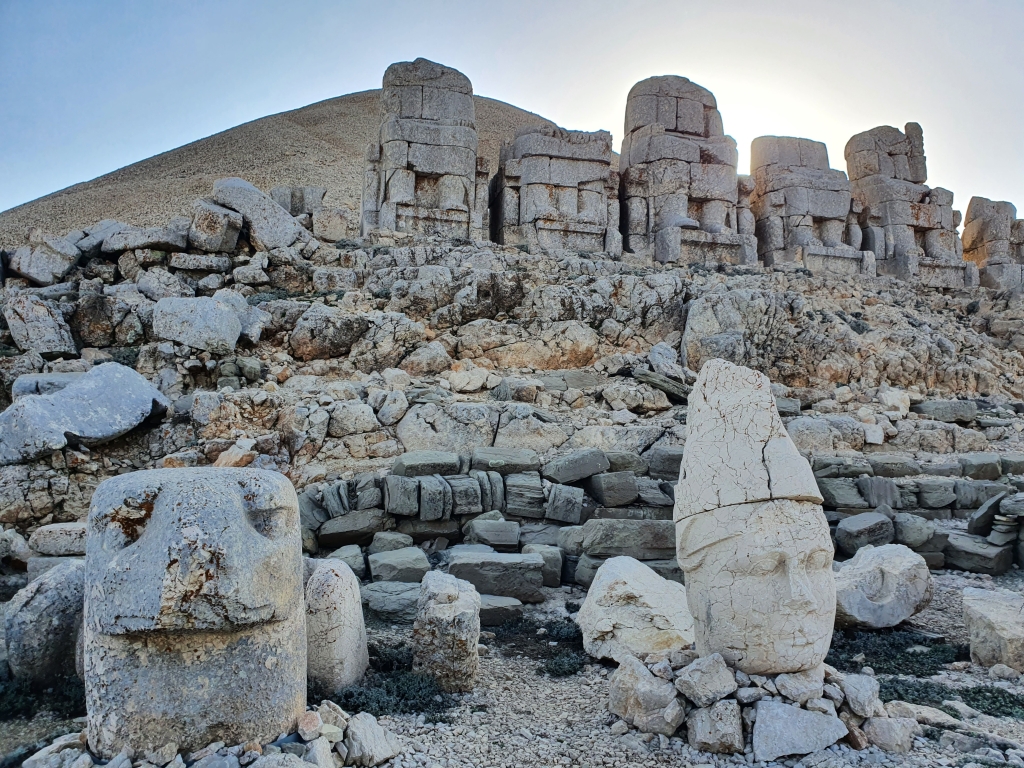 Mount Nemrut is one of the places in the world that makes you ponder over human motivation. Like the pyramids in ancient Egypt or skiing in the desert of the Arab Emirates today. The altitude at the top of the mountain here is 2150 meters, and the mound you see in the back of the photo was piled manually by the subjects of the great King Antiochus I of the ancient Kingdom of Commagene. It is supposed that his tomb should be somewhere underneath, but as strange as it may sound, it has not been found yet. 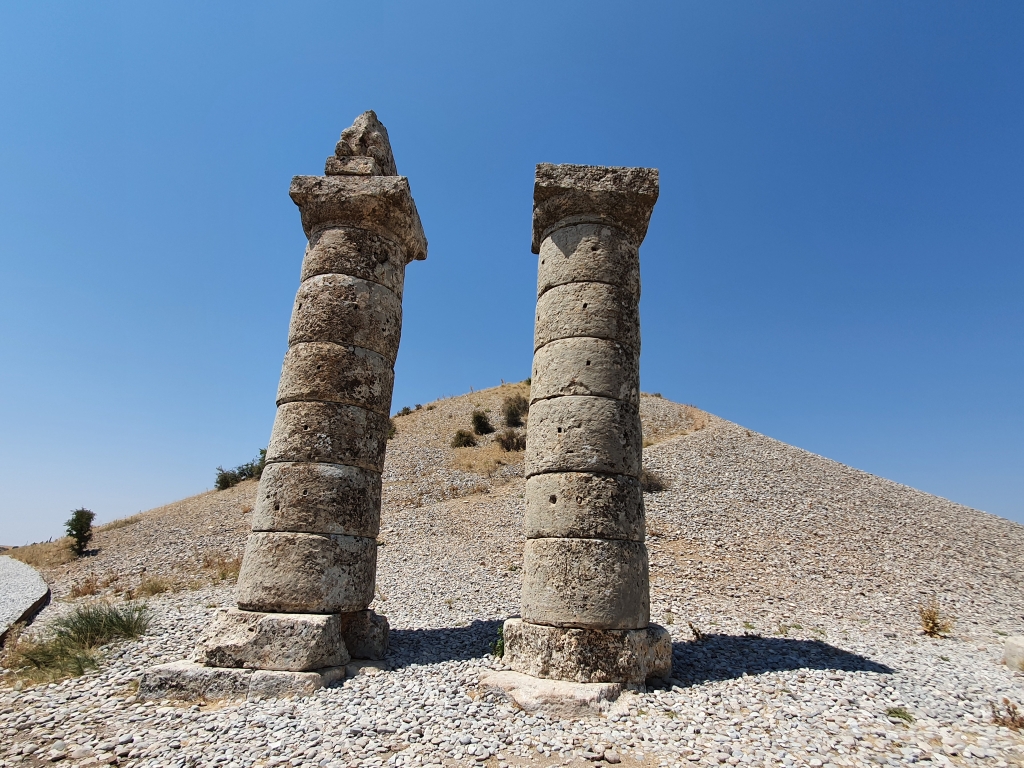 At the same time, there are other mounds around, and not only in Kahta, that have been fully identified, although for this one I am not very clear how it happened, given that it is still closed and one cannot enter inside. Its name today is Karakuş, and scientists have announced that it is the only ladies’ Commagene mound. The wife Isias, the sisters Antiochis and Laodicea, and the niece Aka of King Mithridates II were buried here. That it is royal, we can guess for ourselves by the eagle that welcomes the visitors, perched on a high column (see the top photo). 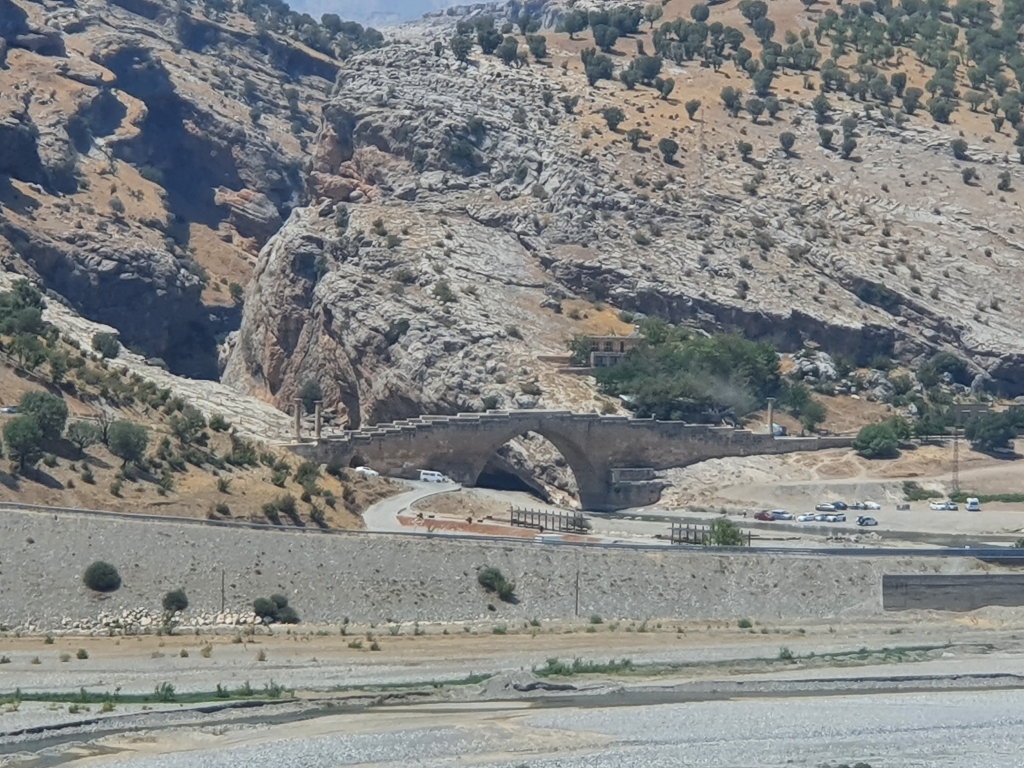 Karakuş is practically located at the foot of Mount Nemrut. From there, the road begins to gradually climb up, crossing the wide bed of Cendere River. Today you will pass it over a modern auto bridge, cutting directly through the valley. About 2000 years ago, people passed by that arc bridge at the background of the above photo, built logically in the narrowest part of the stream. I think it looks a bit like Helms Deep of The Lord of the Rings, don’t you? 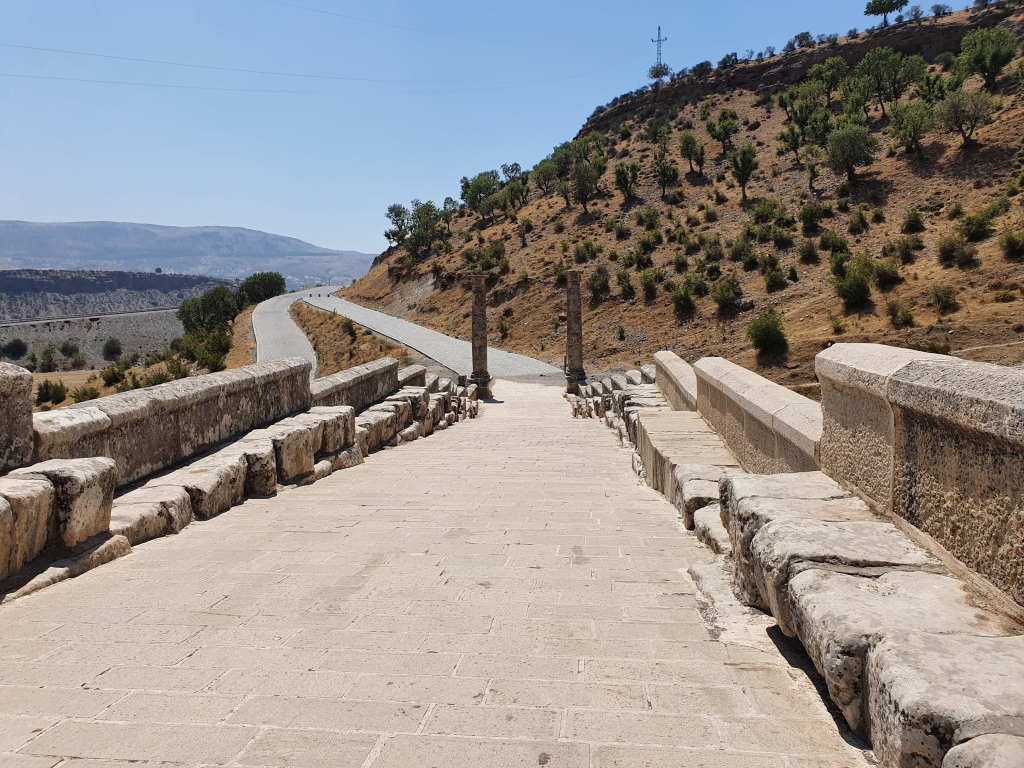 The Cendere Bridge is also known as the Septimius Severus Bridge, as it was built by his Legion XVI and more specifically the Flavia Firma Division, distributed in the former Commagene capital of Samosata (today the city of Samsat) at the very end of the 2nd century AD. The bridge has not trembled all these years, which can hardly surprise us knowing the Romans. The columns at the ends are still covered by inscriptions, which the locals joke are recipes for the famous Çiğ Köfte, but more likely it is something like “Long Live Rome!” 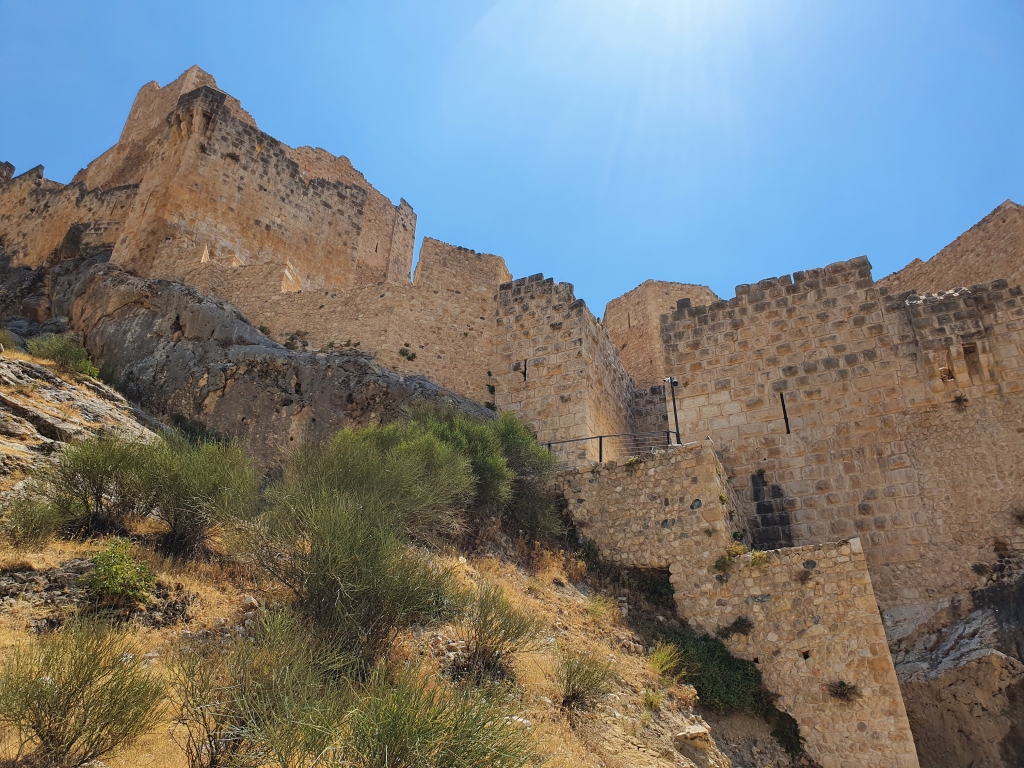 Climbing up the mountain, you will find the so-called Old Kahta, or the village of Koçahisar. The village is just a handful of houses, but they have a great fortress named Yeni Kale. As usual, there was an older fortress here at first, on which the Mamluks built their own in the Middle Ages. The kale is quite well preserved. Fantastic views are found on top, including the dizzying water-supply stairs to the river and the so-called Devil’s Bridge below. 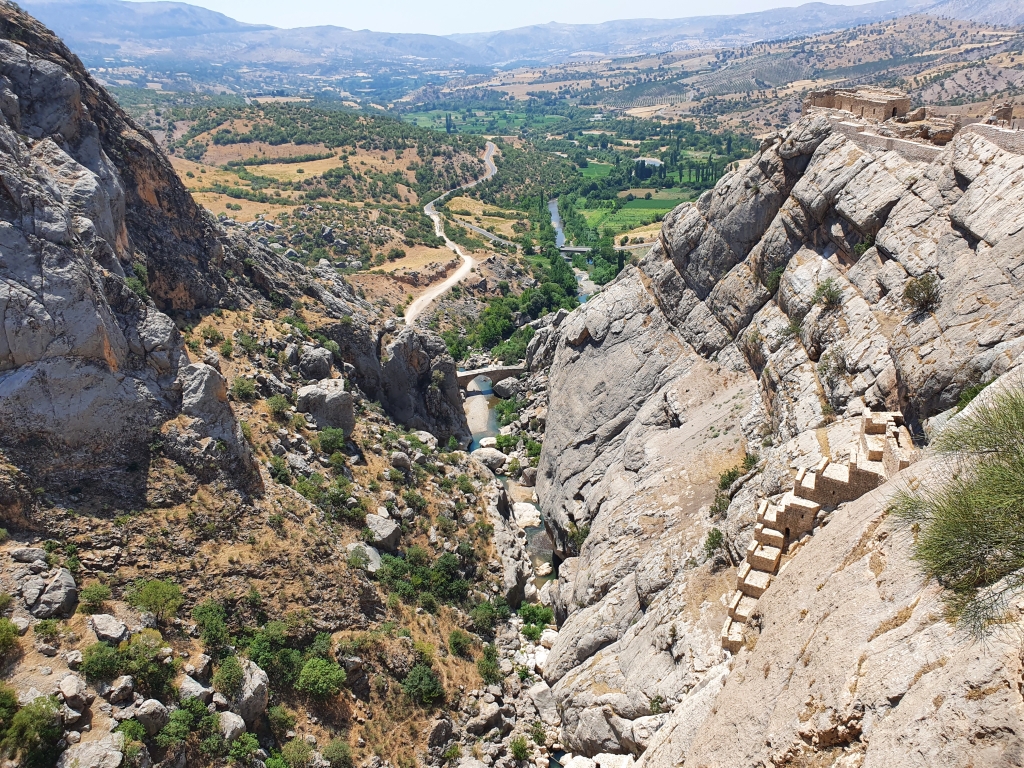 The last stop before the summit is the ancient cult center of the Commagenians – Arsameia. Only parts of it are preserved today, but you will remember it for the longest surviving inscription in ancient Greek in all of Anatolia, the cave tunnels that seem to descend to the bowels of the Earth, and the giant bas-relief depicting the Commagene king shaking casually hands with Hercules. Arsameia is also said to be the best place to gaze at the starry sky in the entire mountain. 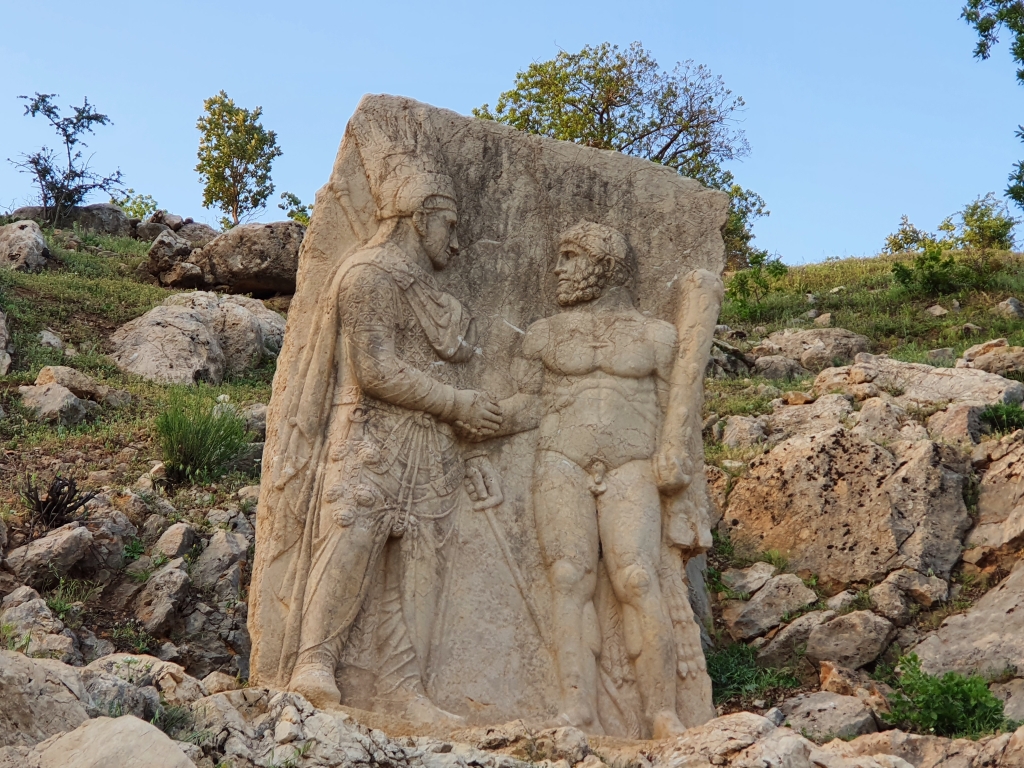 Now, as Michelle from the Resistance used to say in the cult series Allo Allo, listen to me very carefully, I won’t repeat twice. I definitely invite you to visit all these places around the lands of ancient Commagene. I definitely advise against doing it in the middle of summer. August is the month when temperatures in Kahta reach 49 degrees Celsius and it doesn’t matter if you are on top of the mountain at 2000 meters or in the valley at 7. If you do come in August, take measures to avoid lunch time or at least spend it near the banks of the Cendere down there. 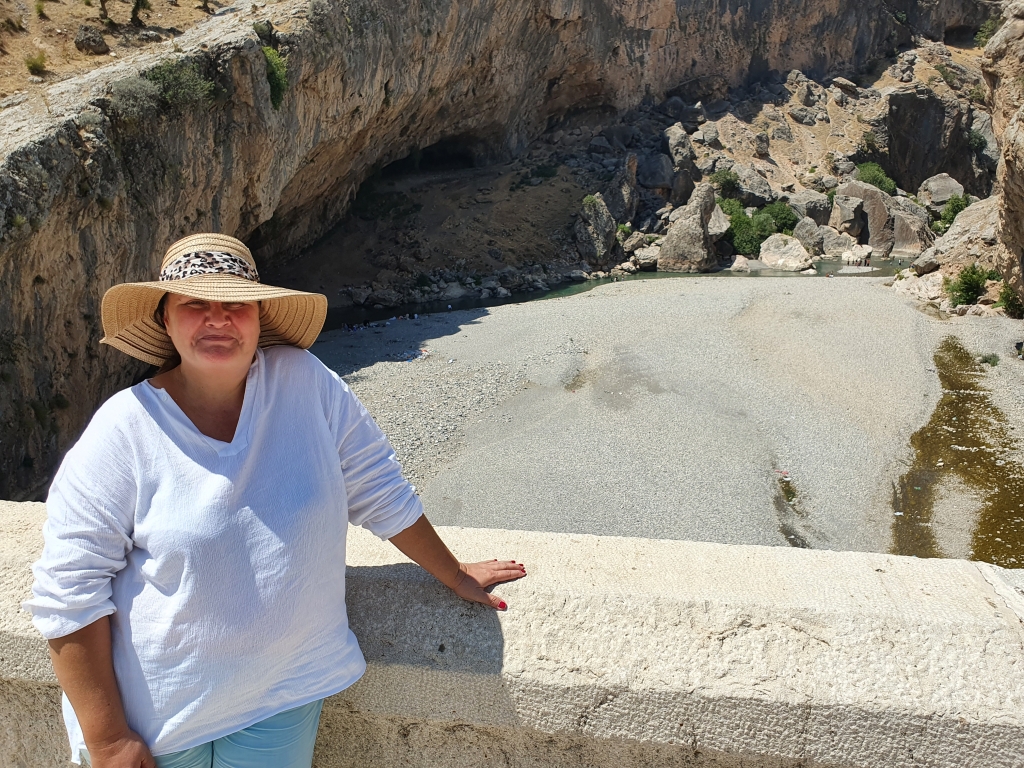