Mount Nemrut and the Heads of the Gods

Mount Nemrut and the Heads of the Gods

I believe every traveler sooner or later finds themselves in a place that seems unearthly. If they are lucky, more than once. I have not had the honor of seeing the Giza pyramids or the Nazca glyphs live. However, I was lucky enough to climb Mount Nemrut in southern Turkey and now I will tell you about it. I will even show it to you. But believe me, nothing can compare to the sensations you will experience on the spot. Caused not only by the ancient peak, but also by the road to it. Are you ready? Let’s go! 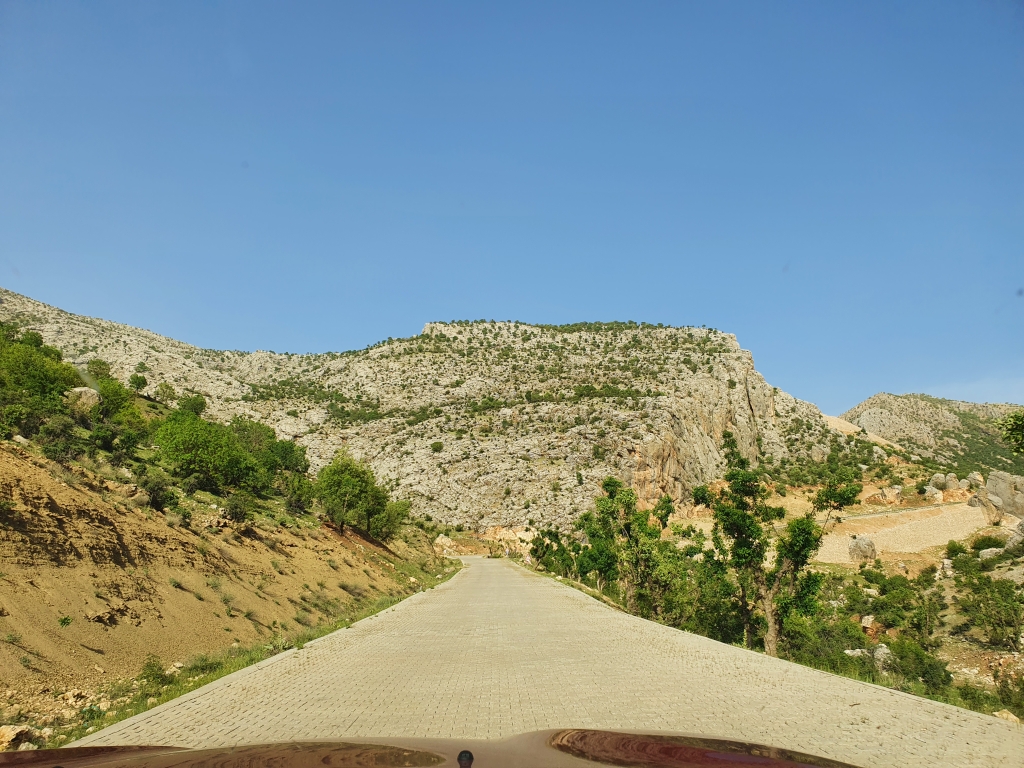 Like most visitors, we depart from the Adiyaman Regional Center. It will surprise you with the ancient necropolis of Pirin, I’m not kidding, it’s the same name as the most beloved Bulgarian mountain, but I’ll tell you about it another time. Heading northeast, we soon cross a huge alluvial valley formed by – according to Google – a stream! From there we start climbing the mountains. Those are serious mountains full of sharp cliffs. Wondering why the ancients chose to climb there. But maybe, if you are selecting a place to build an impressive sanctuary, this is exactly what you will be looking for. The road from the turnoff to the site – about 20 kilometers, in the photo above – is made of paving stones without a single defect. 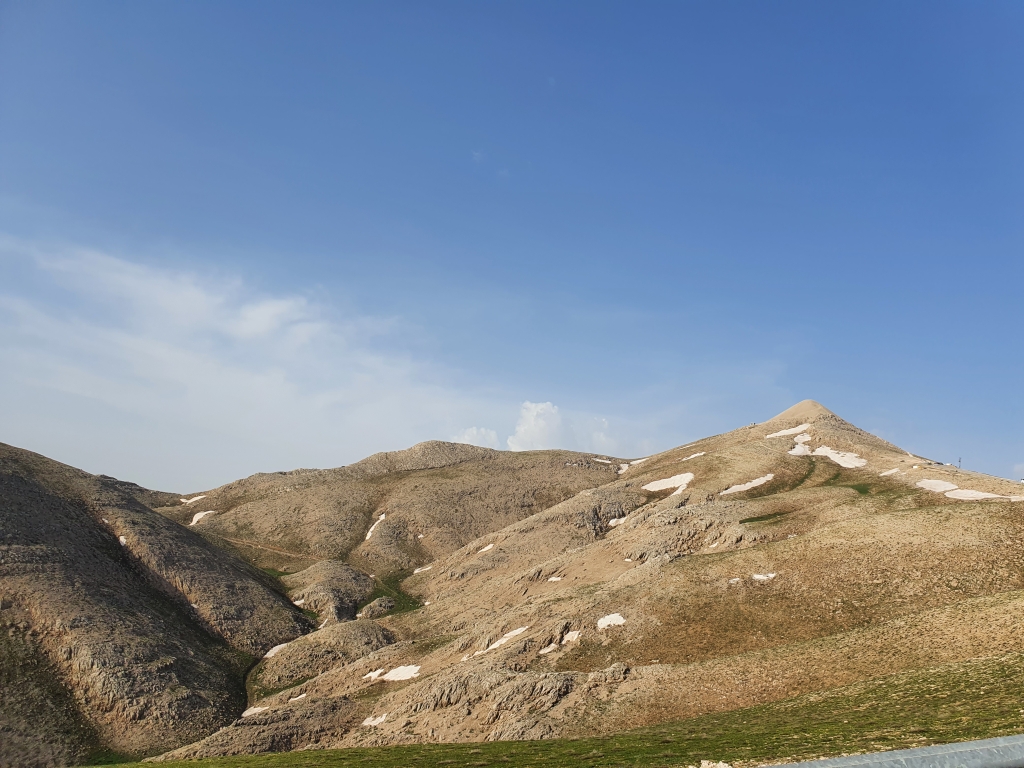 Above the visitor center, which in the busy season is the last stop by car and from there visitors take the shuttle bus up, we begin to see the peak itself. It is 2134 m high and soundly dominates the landscape. At the end of April, the wind above is crispy despite the bright sun, and if the winter has been long and cold, it may not be accessible for visits yet. We are lucky to park under the very top and from there follows a steady climb, regardless of which approach we choose – the stairs to the East Terrace or the still snow-covered path to the West. In any case, it’s about 45 minutes to the top, and my respect for the ancients continues to grow. 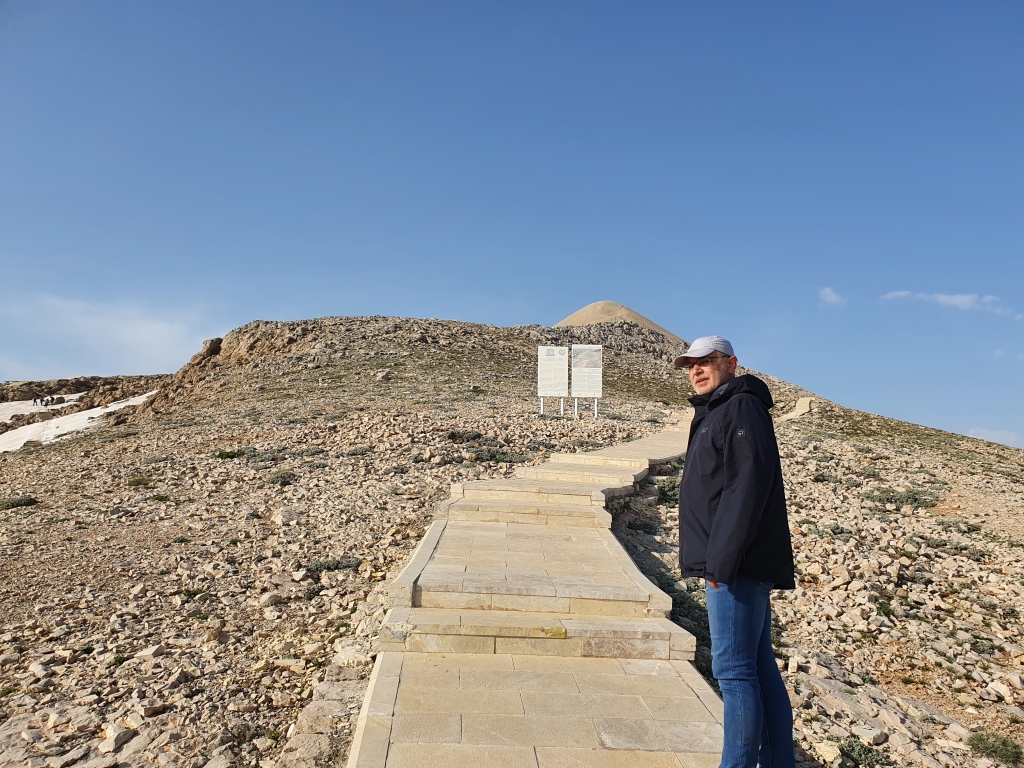 The panorama around is cruel and it is difficult not to stop for photos every minute or so. Of the surrounding hills, snowdrifts and spring flowers peeking out from under them, as well as of the peak above us, which seems to have been piled manually – if we can imagine such giant hands. Well, some of us may use the photo-stops as an excuse to re-locate a heart that has climbed up our ears. But the moment we face the East Terrace of Mount Nemrut, the panorama fades. The view above us really seems unearthly. 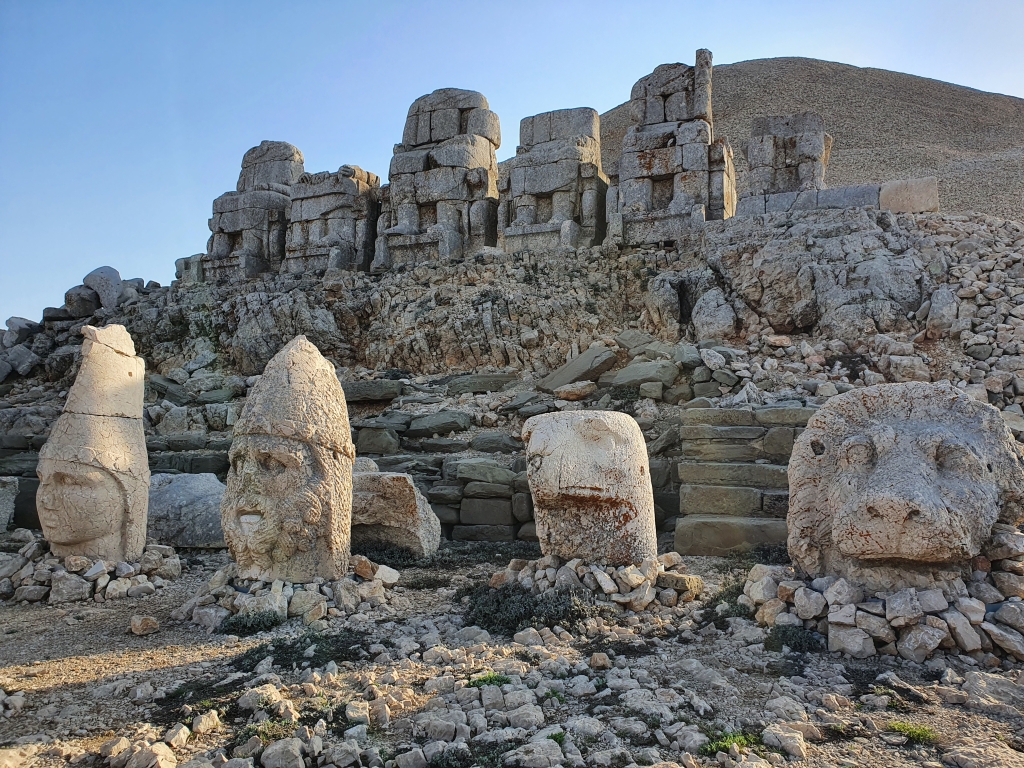 Left to right: Apollo, Zeus, an eagle and a lion

Keep in mind that the heads are between 2.5 and 3.5 meters high, and their bodies left alone up on the hill – about 9 meters. On the East Terrace, we find the images of two lions, two eagles, Zeus, Apollo and Heracles, in the equal company of Commagene and Antiochus. Commagene – the only female figure – is a personification of the kingdom of the same name, which existed in these lands in the last two centuries before the new era, and Antiochus is its most famous king. Mount Nemrut was actually built by him as a pantheon of the royal family. 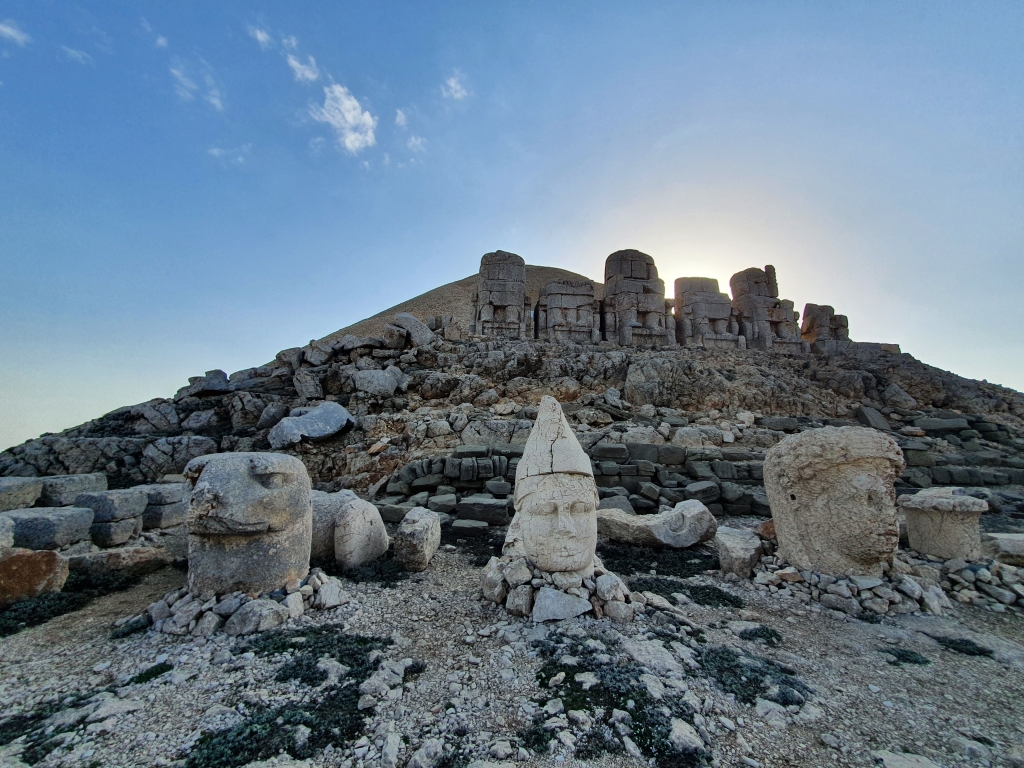 To the right: Commagene. Next to it: Antiochus

Antiochus is said to have been a worshiper of Zoroastrianism, which seems to me to be at odds with his choice of deities to perpetuate. However, it cannot be denied that his own perpetuation, as well as that of his kingdom, turned out extremely well. An alley connects the East with the West Terrace of Mount Nemrut. From the huge slabs on it, although quite damaged by the centuries and the climatic conditions at the top, I can assume that the road was ceremonial. 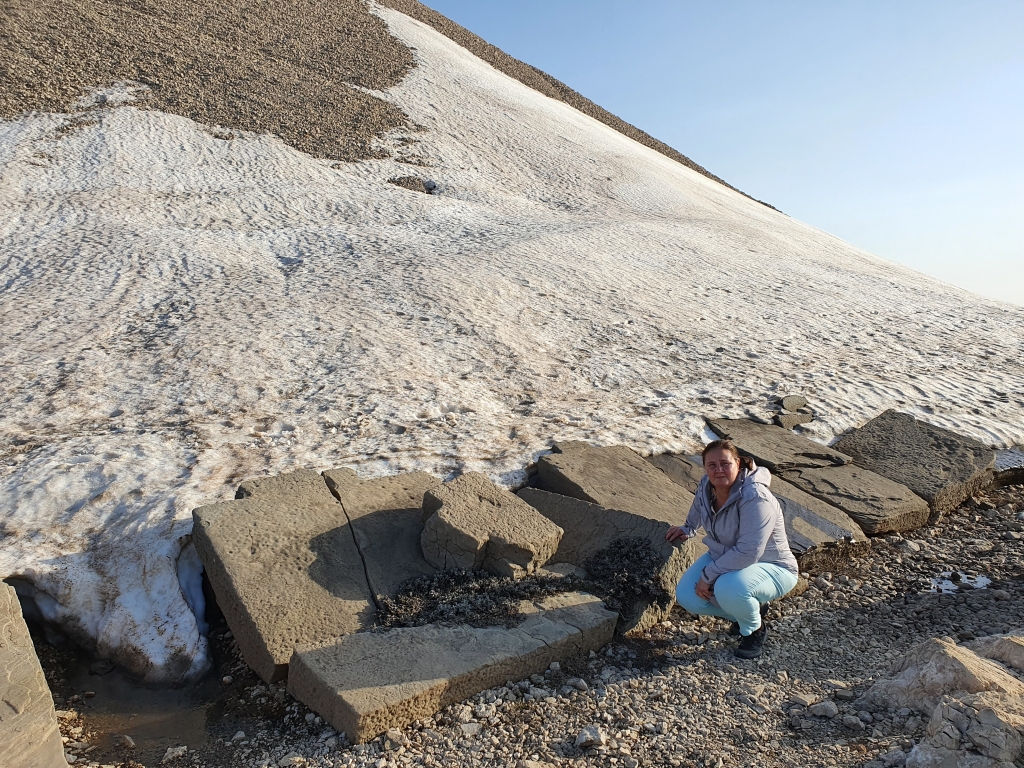 A visit to Mount Nemrut in the late afternoon can be a problem for photos of the East Terrace, where the sun shines at the backs of the statues, but the West Terrace is perfectly lit. Smaller in size than the eastern one due to the specifics of the terrain, it was artificially expanded during its construction in antiquity. The same specificity is obviously the reason for its greater damage from the seismic activity of the area. The bodies of the giant statues are missing, but the heads are here. Again we have the defenders – eagles and lions at each end, as well as Zeus, Apollo, Heracles, Antiochus and Commagene. 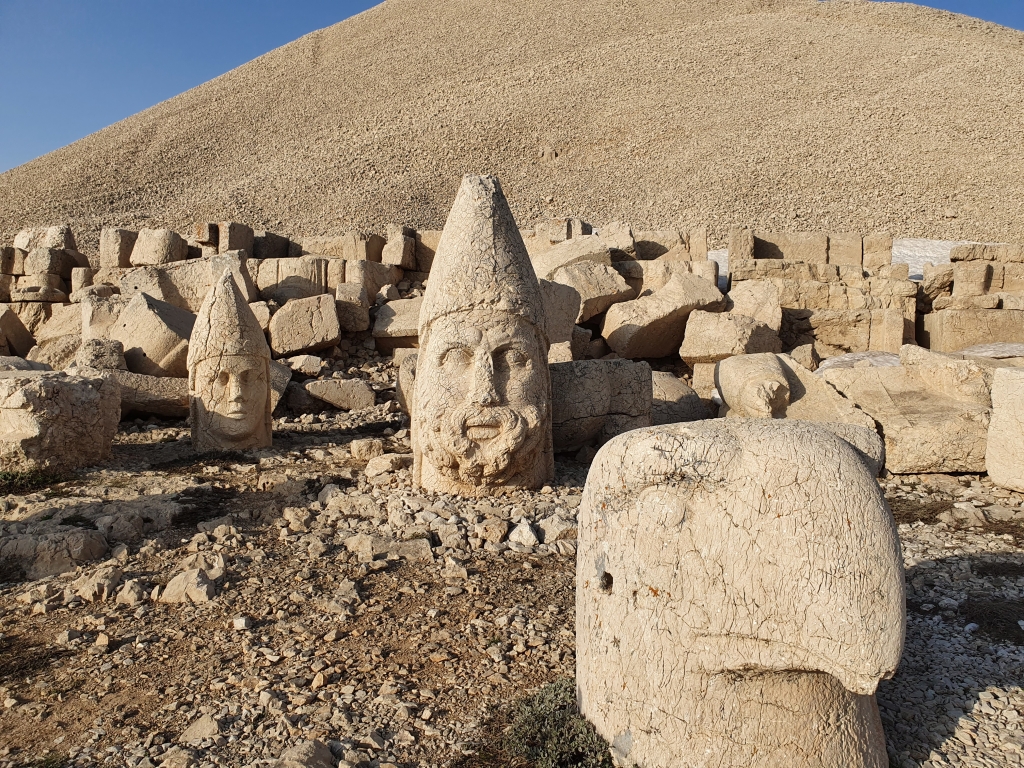 There were altars on both terraces so that offerings could be made to the gods and ancestors. On the East Terrace, there is still a larger altar standing in the shape of a stepped pyramid; on the West Terrace there were smaller ones which have been destroyed. You can also see stelae (ritual plates) with the images of ancestors. Historians have made drawings with reconstructions of what the place looked like in its youth, we can find them in museums, but I continue to marvel at the determination and enthusiasm of the ancients. They did not have a 20-kilometer paved road to take them almost to the top of the mountain, comfortably seated in an air-conditioned car. 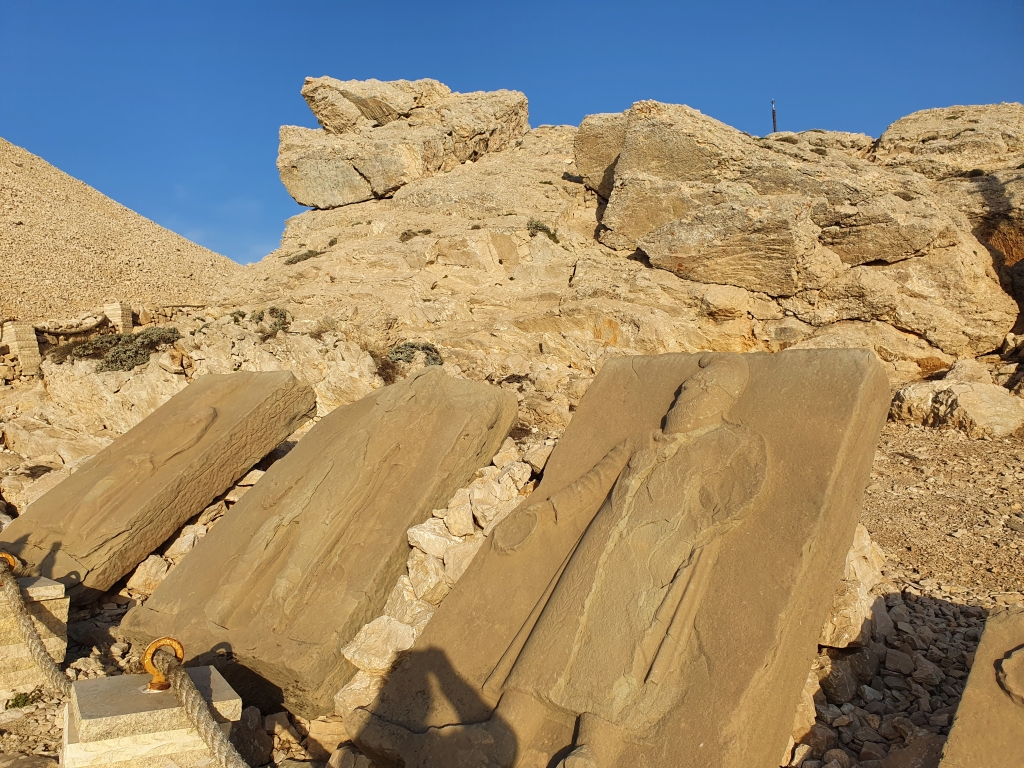 We can choose which of the two paths to take down from Mount Nemrut. We have a long descent ahead of us, surrounded by a fantastic panorama. Going down, we will meet new worshipers who have taken the steep climb up. We will envy them a little, here they are yet to discover this amazing place. But we ourselves will leave happy, with the thought that we are following in the footsteps of people just like us, no matter that we are so many centuries apart. After all, what are 2000 years. Dust in the wind … 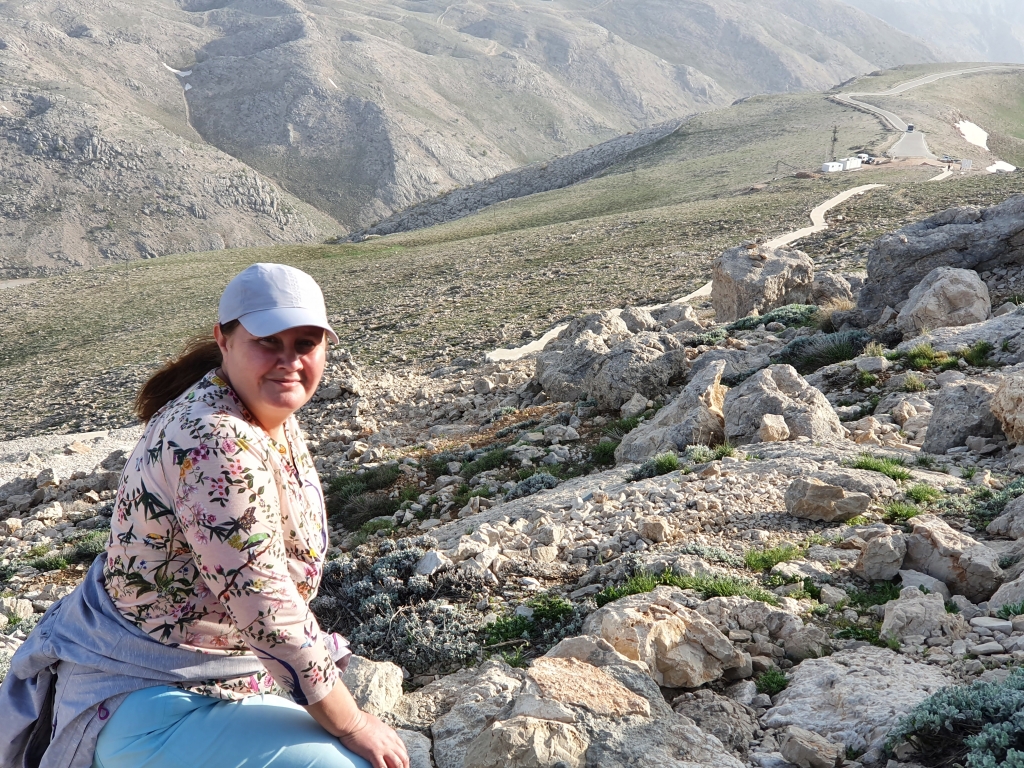 You can see more of our Turkey Road Trip here and here.