To Kozan for a Castle

Home/World/To Kozan for a Castle
Previous Next

To Kozan for a Castle

I began my story of our journey through central southern Turkey with the million-strong city of Adana. From there we continued to another city of millions – Gaziantep, in stark contrast to my dislike of large crowds. In the meantime, we spent a day in some intriguing but unpopular places along the way. The city of Kozan, for example, with a population of only 80,000, is apparently considered so uninteresting that the Bulgarian Wikipedia does not find it at all. In fact, I can’t tell you anything more about him, because we went there only for its castle. But what a castle! 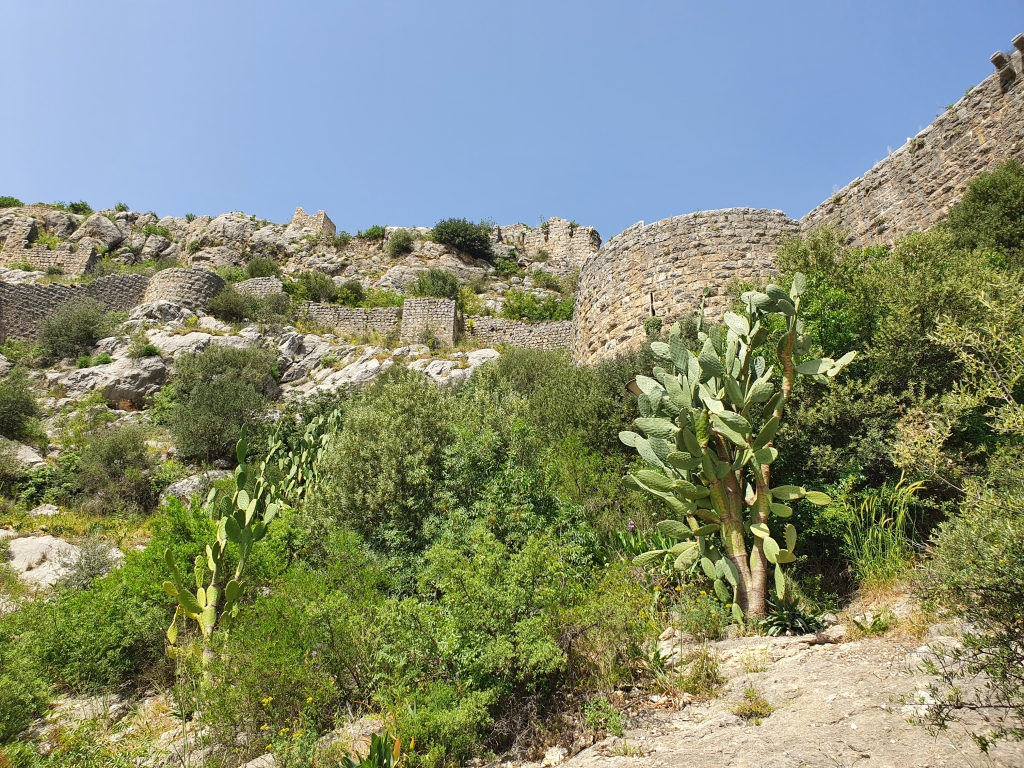 You start seeing it perched on the highest peak around as you approach the city. You realize its scale when you get under it. Kozan is spread around and there are great views of it from above. Perhaps because of this fact, the local municipality has turned the hill into a well-maintained park. Climbing the S-shaped serpentines of the well-maintained road (by the way, we could hardly find non-maintained roads in Turkey), you constantly come across stairs, railings, viewing platforms, gazebos, benches with tables and all other park furniture. 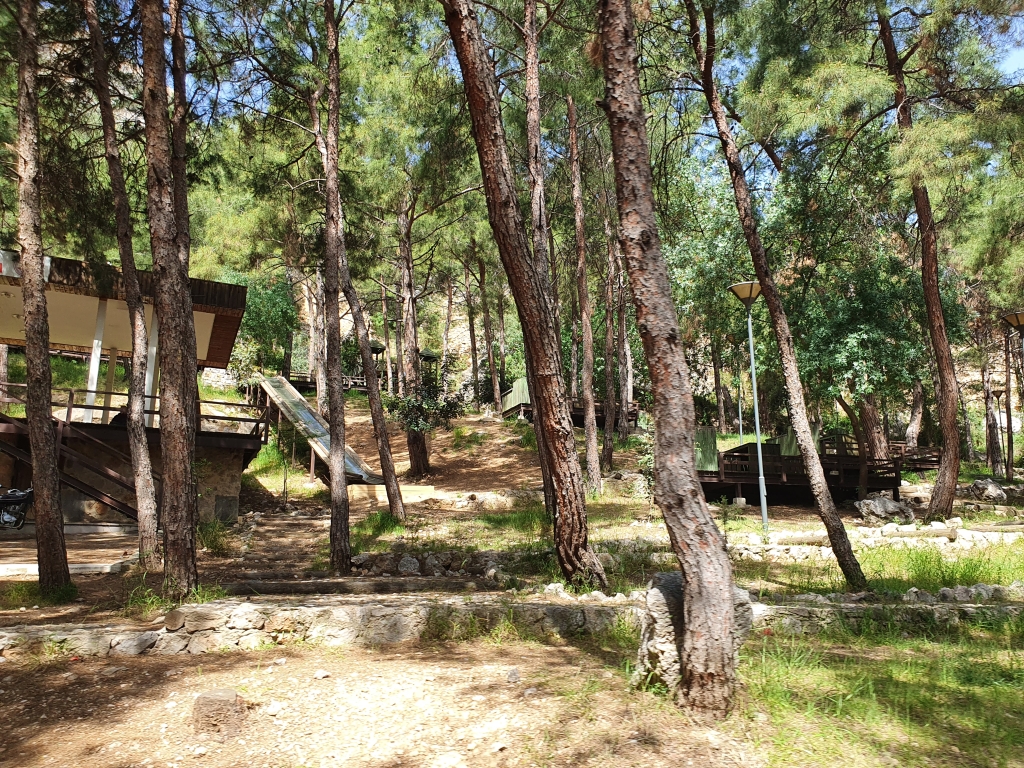 At the foot of Kozan castle, there is a parking lot, a small cafe and toilets clinging on the hill. The municipal stairs continue to the gate of the citadel, from where you are abruptly left to fend for yourself. It is a bit surprising after all the infrastructural security so far, especially considering the fact that most of the castle is in ruins and the owners do not seem to apply any safety measures. But it can be a purposeful decision in favor of a sense of authenticity. The thick fortress walls. The arched entrance to the citadel. Modern graffiti… 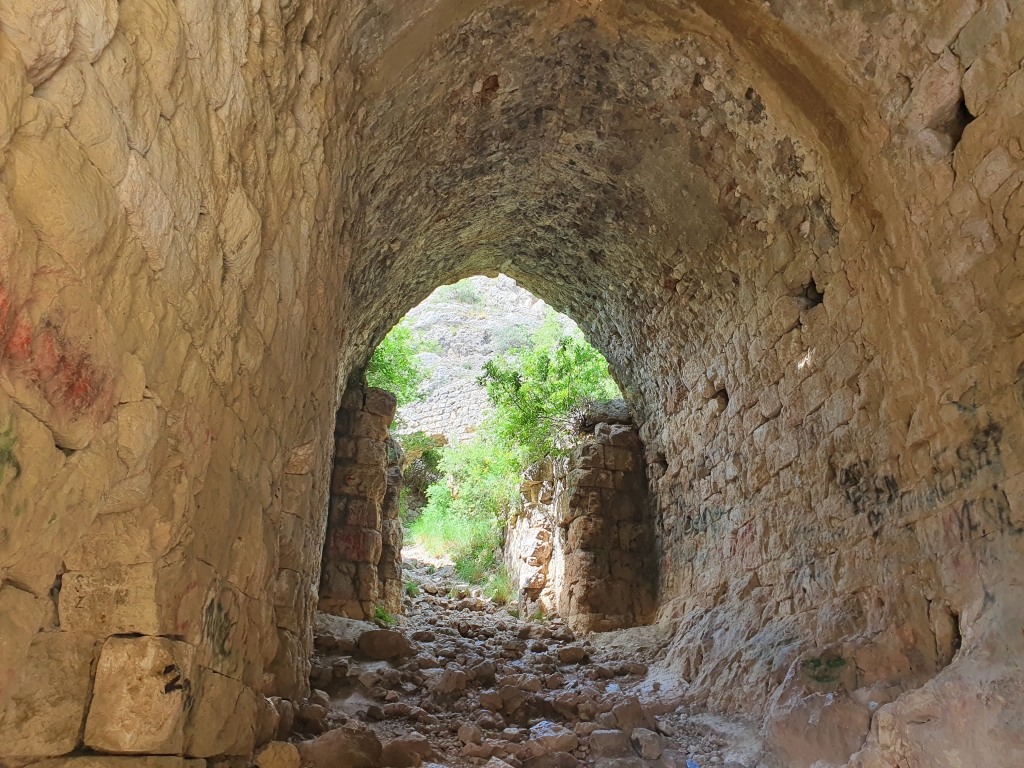 The difference in temperatures outside and inside the arch is drastic, especially on a hot and sunny day, like the one we unwittingly chose. It is easy for you to want to stay there, because higher up the hill the shade is scarce. That would be a big mistake. The moment you climb over the gate, you begin to see many things. How big is the citadel alone, stretching in both directions on the ridge. How big was the whole fortress, judging by the walls below you, so far hidden in the woods. What a view, at last, is revealed from above to the city of Kozan. It makes you forget about both the heat and the climbing. 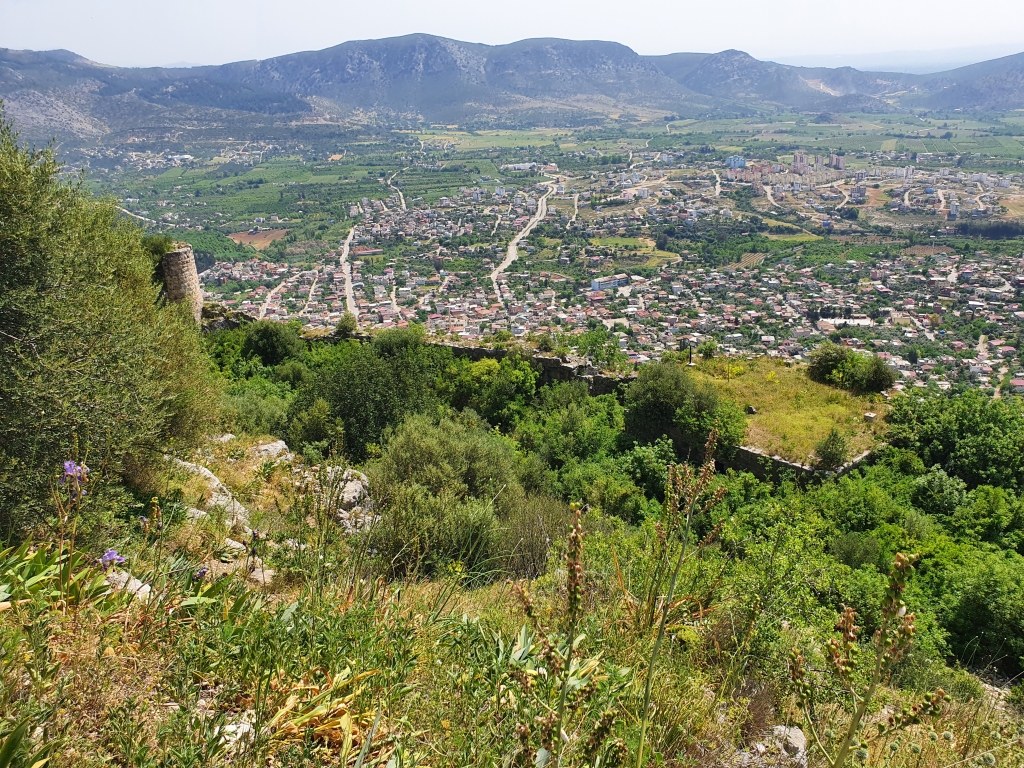 There are no information boards in the citadel. You can have a lot of fun making assumptions about what this or that was. In any case, you have to be very careful where you step. Not to step sideways, not to slip or sprain your ankle – that’s logical. Not to surprise any innocent crawling creature, too. Or let it surprise you. But you have to be especially careful about those innocent little holes, which turn out to be the vile ventilation shafts on the ceilings of underground vaults. 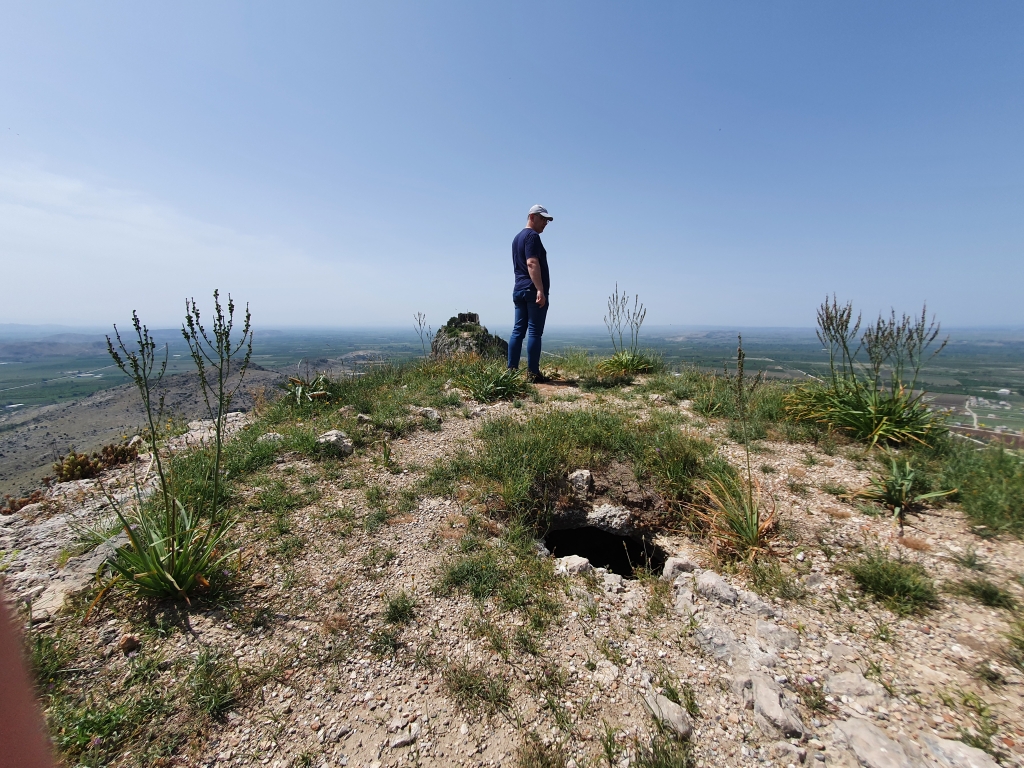 You notice, I guess, that I haven’t said a word about the history of Kozan castle so far. This is because you will not find a word in situ. Information sources on the Internet claim that they had not heard of the site before the Byzantine period, ie. before the 5th century AD. I strongly doubt that there was not some fortress here before, given the characteristic local geography and the historical habit of people to recycle what their ancestors left behind. What can be seen now dates back to the so-called Armenian Kingdom of Cilicia in the late Middle Ages. 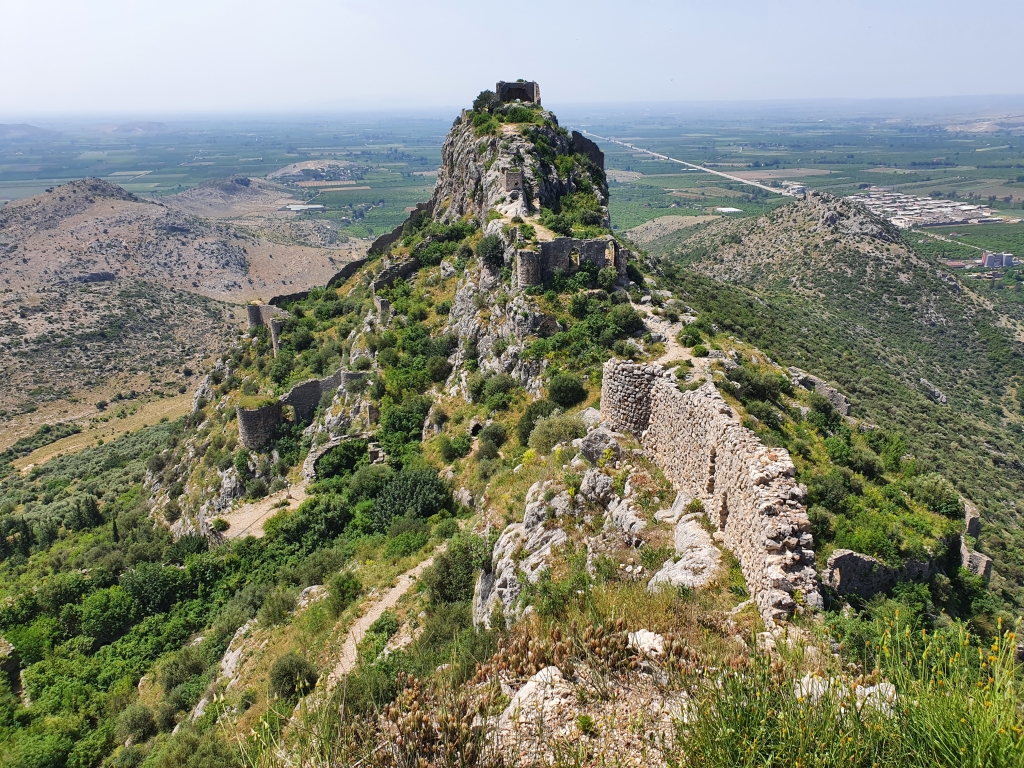 The view in the photo above is from one end of the fortress, just as you have crawled to the highest point in the heat and all you can think of is the refrigerator in the cafe below the entrance. This is where the eternal dilemma of the traveler grabs you. Would you listen to common sense and the already tingling skin on your bare arms and neck and be satisfied with this photo alone, or would you run to the edge there to see what can be seen from it. Well, every true traveler knows the answer to this question. It’s always worth going to the edge. 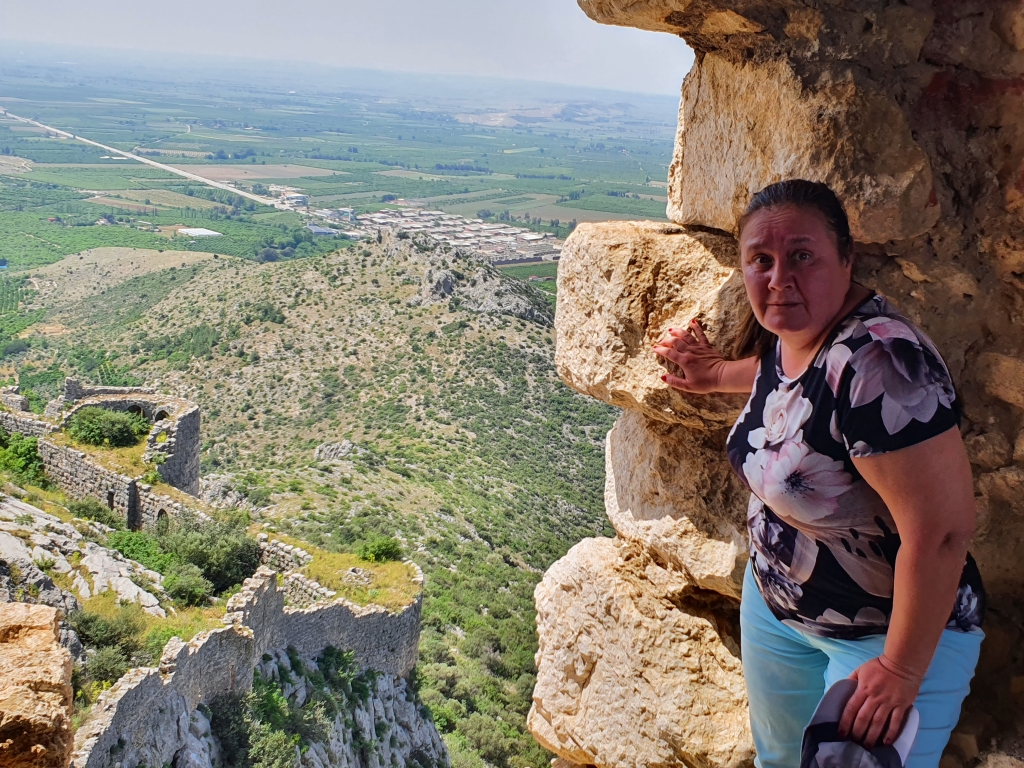 What could I tell you at the finale of this hot walk to the castle of Kozan? Maybe “Get up early to go while it’s still cooler”? Or “Don’t you walk in the heat at all?” I will not tell you anything of the kind! Go  by all means. Take hats, long sleeves and comfortable shoes. Apply sunscreen and get some water. Touch the ancient stones and listen to the wind blowing in the grass. And peek from every ridge. 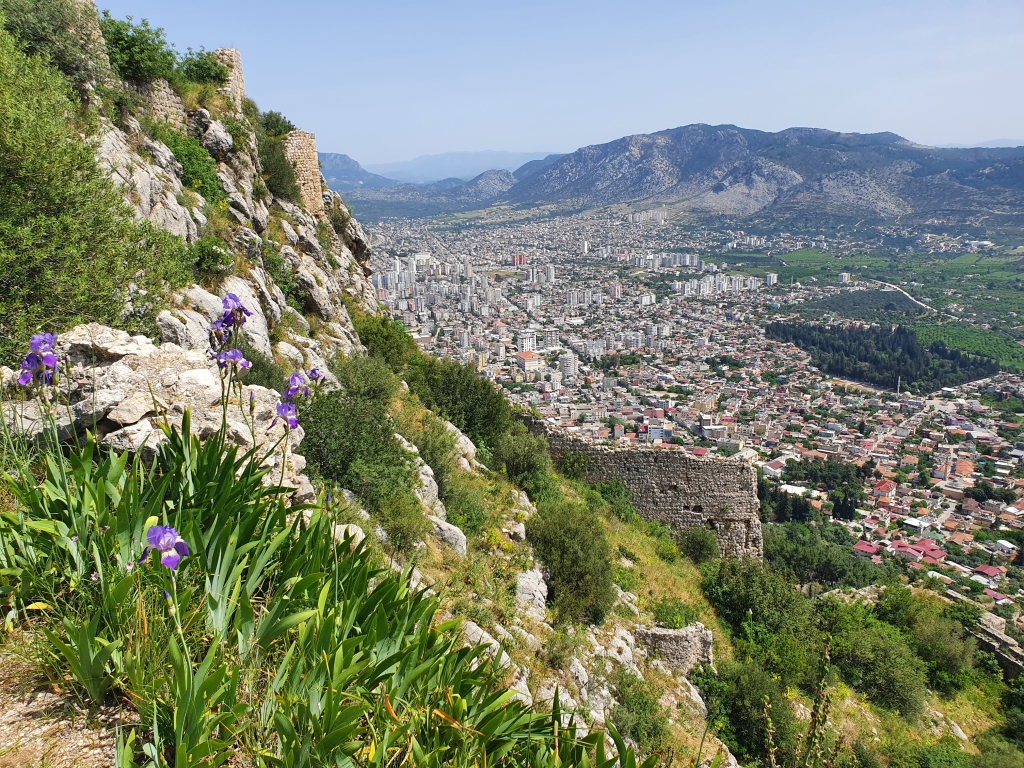