Home/World/Rock churches of Goreme
Previous Next

Goreme is the village that is perceived as the center of Cappadocia. It is the one, after all, giving its name to the Goreme National Park, which is in turn the center of the UNESCO World Heritage Site. Its value to the world is neither only natural nor only cultural; it is one of the so-called mixed sites because of the combination of the amazing rock formations and the zeal of man to dig himself in the heart of these formations. UNESCO pays special attention to the “rock sanctuaries with unique Byzantine art from the post-iconoclastic period”. I remind everyone, who has read or not my article on Zelve, that the iconoclasts are a sect denying icons as an expression of idolatry. The iconoclastic interpretation of the decoration actually did not seem bad to me at all.

Remains of it can be seen in many places in Cappadocia, often visible from under the later layers with images of saints. This one especially is from the Goreme Open-Air Museum, which is defined as a large monastery complex / seminary / gathering of monastic communities, each with its own church. The most famous of these churches, Tokali which means – believe it or not – the Church of the Buckle, turned out to be a site outside the official boundaries of the Museum. Since no one cares to inform the stunned visitor about this, it is extremely easy to miss this pearl of rock art. Which we did, so I can’t show it to you. 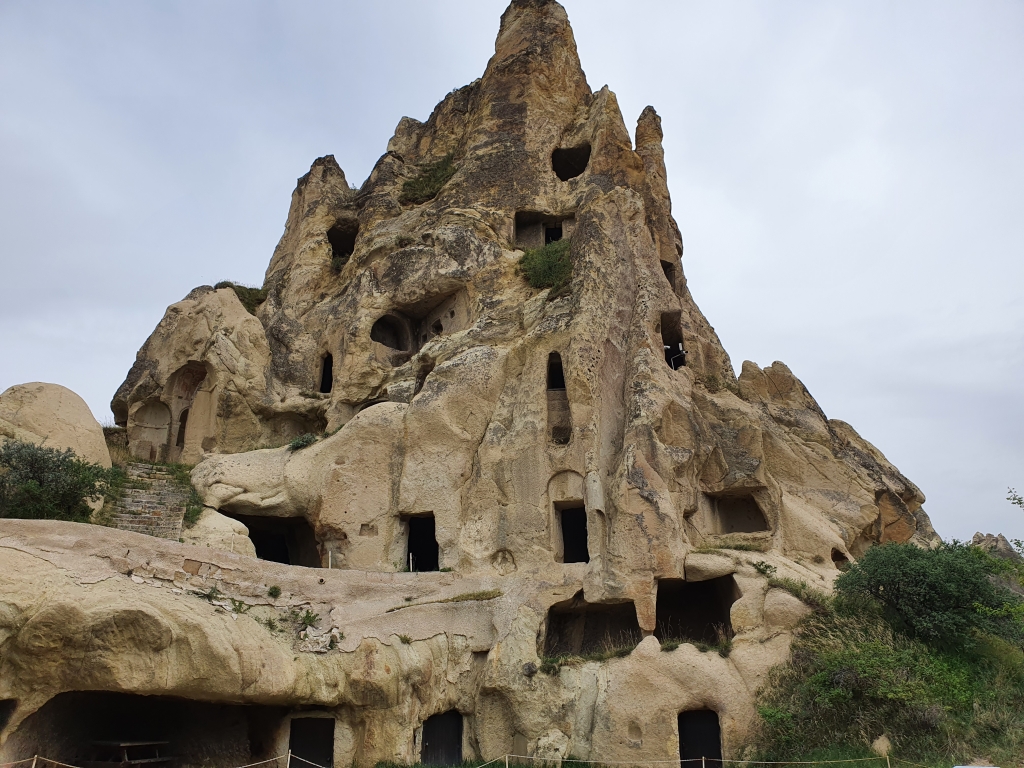 I can, however, show you what greeted us as soon as we entered the Open-Air Museum. This in the picture above is the amazing site known as the Nunnery and presumably part of the aforementioned seminary. One first tries to imagine how the young student monks scurried up and down the floors of this honeycomb, and then how they managed to not be constantly distracted by the view that was revealed to them from the upper levels. What a school, huh? From the Nunnery, the path led us in circularly to a series of monastic sites carved into the stone, only some of which were open for visits. For example, this is the entrance to the Church of Sandals – they have great names, no? – from the middle of the 11th century.

The name comes from the two deep footsteps in the stone under one of the frescoes, although it is believed that the church was actually dedicated to the Holy Cross. As I mentioned, some of the churches in the Goreme Open-Air Museum were closed for visits, probably for safety reasons, and in others it was forbidden to photograph the interior. The reason for the latter is outside my comprehension. There were no restrictions in the Church of Sandals, so I offer you the most general plan I could catch. It is not easy to take pictures in a narrow rock niche! 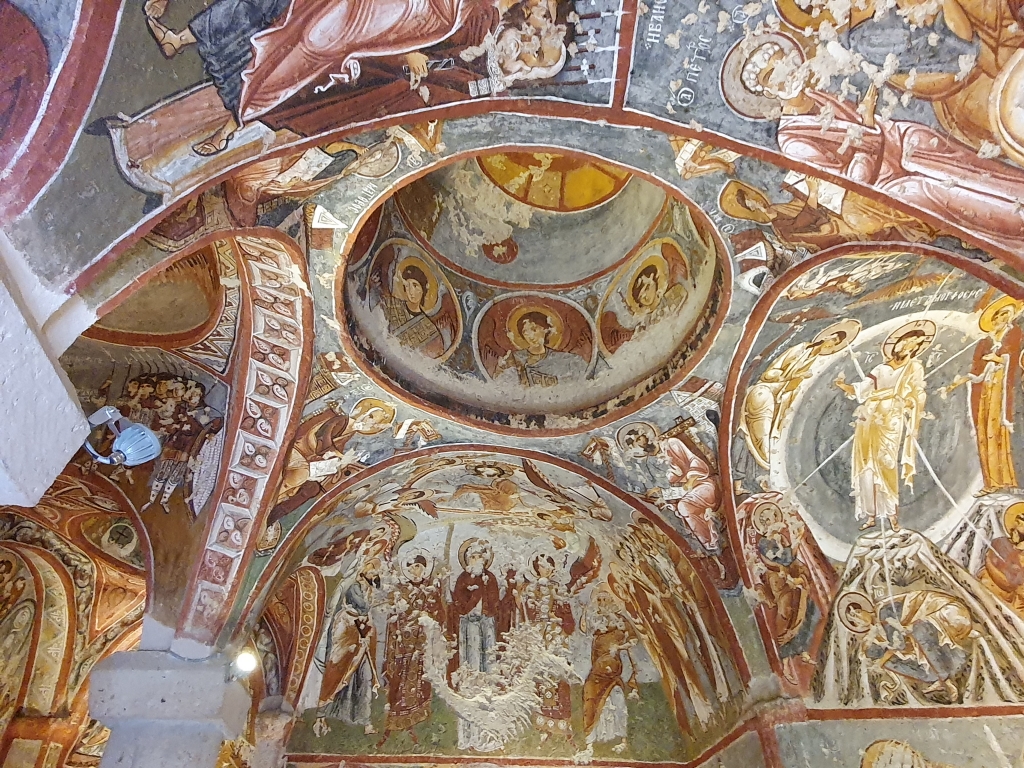 The neighboring church, for example, the Dark Church, is not only forbidden for pictures inside, but there is additional entrance fee to be paid on top of the ticket for the whole Museum. We were informed that the name came from the fact that natural light was scarce, coming only from a small window in the narthex (the vestibule). And that helped keep the colors of the murals extremely bright. Bright they were, I must admit, but why was this particular church called the Dark One, having at least one window while others had nothing, remains a mystery to me. I think that the architecture of the site itself was very attractive, as the entrance to the church was from a terrace on the second level, which can be reached by an internal tunnel carved into the rock. 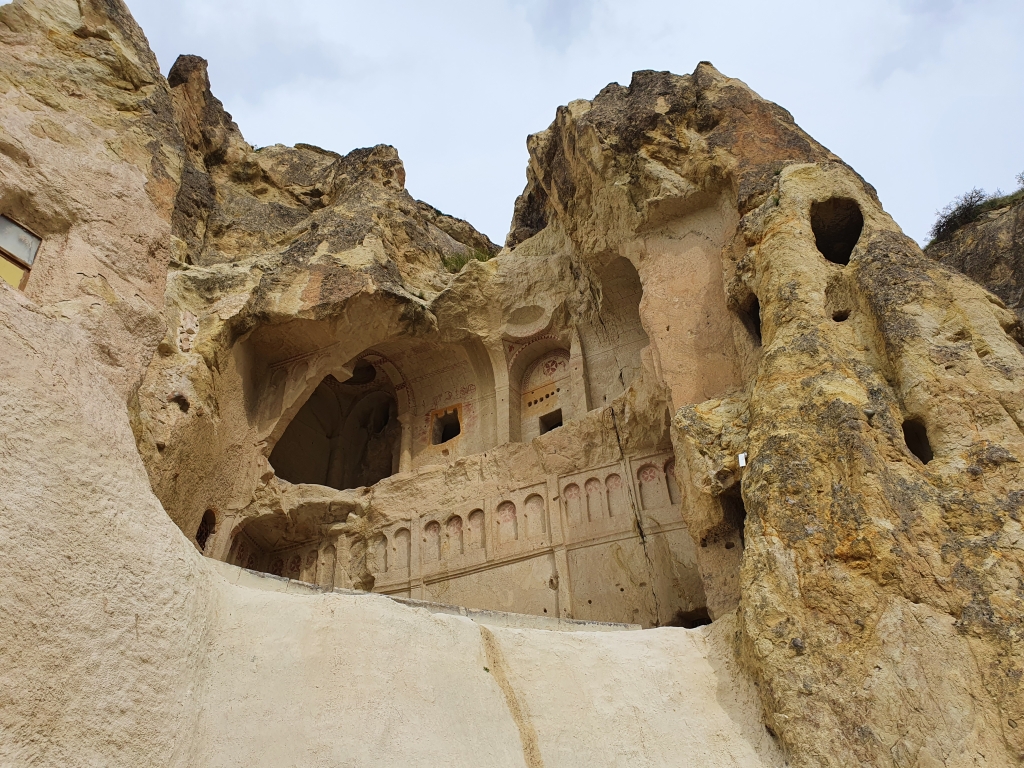 In general, I must admit the sin that for me the rock architecture was much more interesting than the Byzantine frescoes. Probably because I come from an area where we have similar ones. UNESCO will have to forgive me for that. Equally interesting were the traces of the daily life of inhabitants. They, of course, were not many – neither the inhabitants nor the traces. And they were often to be found in darker places than the Dark Church. Here is an example of a housing premise, most likely a kitchen, with dents on the floor and walls, the purpose of which we could guess at large. The spoon-like shape in the center was the hearth, and we heard two versions for the purpose of the small ditch connected to the hole. To remove ash or introduce air to keep the fire burning.

The kitchens, of course, had dining rooms attached, some in the same premise and others separately. Some were just as dark, others had windows. When I say windows, I hope you understand that we are talking about openings in the rock. The design was the same – a long table with long benches on either side for the monks to sit and eat together. In fact – three parallel flat stone walls or ramparts, pick a term. In Cappadocia, everything is different and special. 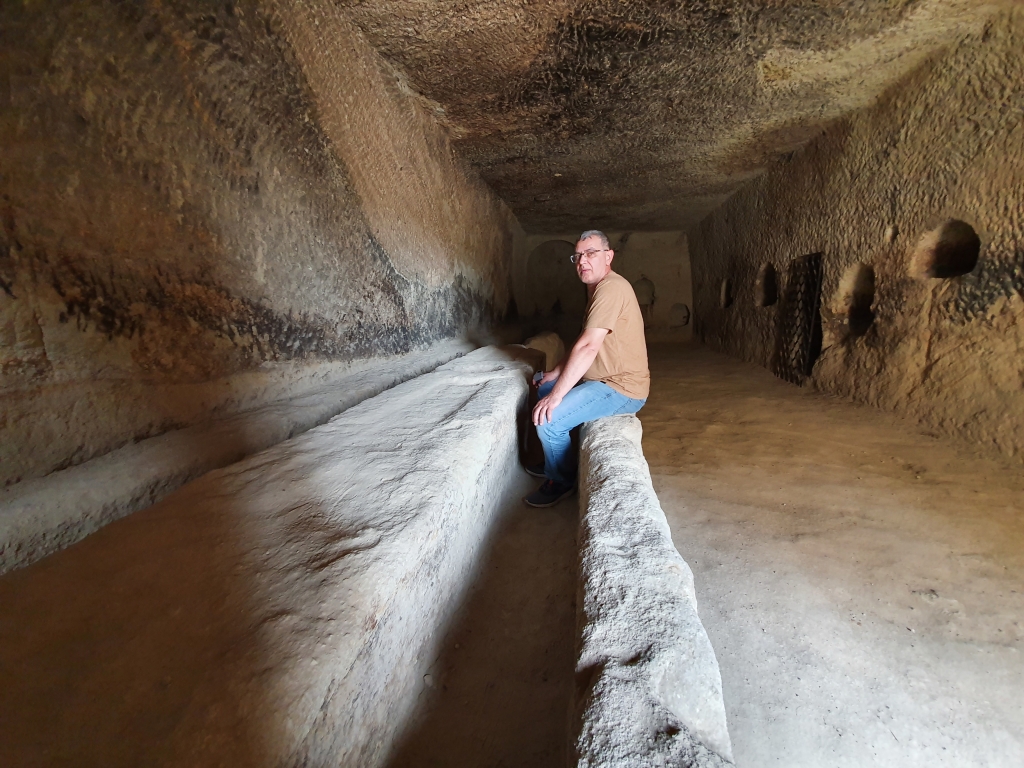 Another feature of the church interior in Goreme was the presence of grave niches carved directly on the floor, in the very rock. Currently looking like concave narrow rectangles. A certain variety were the tomb niches in the walls. Initially we decided that they were for the monks, or rather for the high clergy, because a lot of monks would have lived here and if this was the monastery cemetery, it should have been much bigger. However, in this case we could not explain the presence of small rectangles. It was only towards the end that a helpful sign appeared, which explained that this was for the patrons of the churches from the surrounding villages and their families. 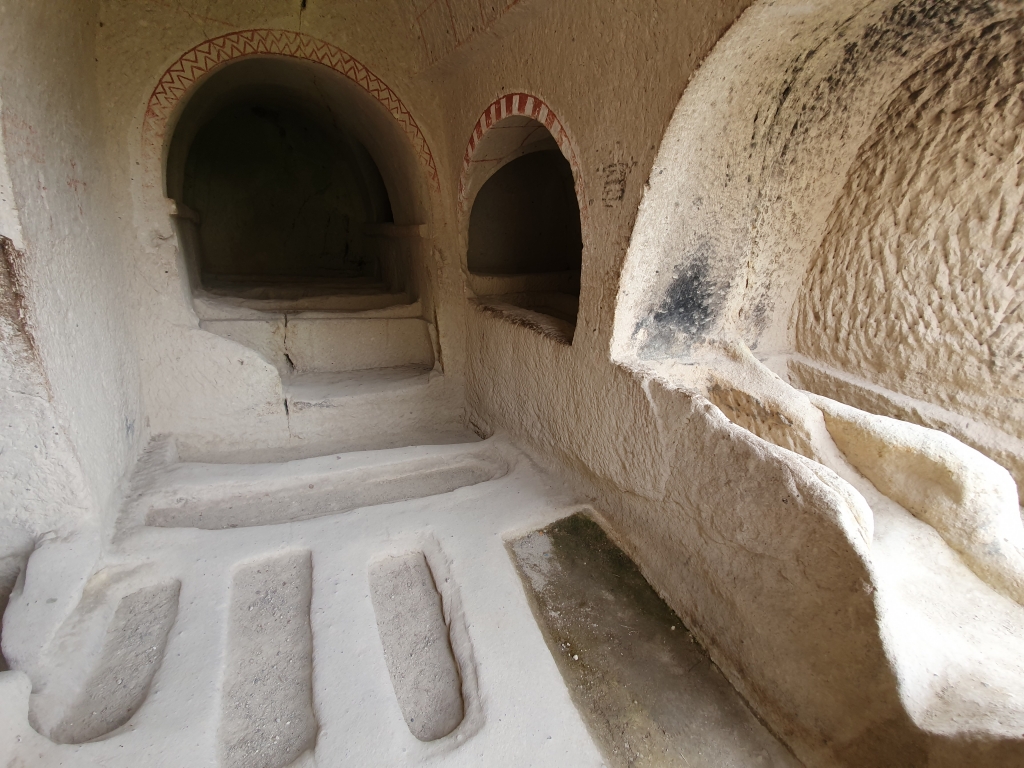 You may read more of my Cappadocian travels here.