Zelve or a village Cappadocian style

Home/World/Zelve or a village Cappadocian style
Previous Next

Zelve or a village Cappadocian style

Names in Cappadocia can be a little confusing. Zelve, for example, is simultaneously: (1). a 21st century settlement inhabited by 21st century people; (2). an open-air museum, part of the UNESCO site, included in the List of World Natural and Cultural Heritage as “Goreme National Park and the Rock Sites of Cappadocia”; (3). the valley in which the above two are located, together with the Fairy Chimneys which I have already written about. The same valley which, exactly at the open-air museum, that is, at its end, somehow turns into three valleys. You will find it under the name Valley of the Fairy Chimneys (Peri Bacalari in Turkish) and the Valley of the Monks in English. You may have noticed there is no specific connection between the Turkish and the English. However, this must not bother you at all; you will surely eventually find what you are looking for.

And what you will be looking for is the Zelve Open-Air Museum. I have already mentioned that it represents three connected valleys, carved by nature and man in the soft Cappadocian tuff. At the beginning of May it offers a captivating combination between the orange rocks and the fresh spring greenery. There has been a settlement in the valleys for centuries; locals say it is not known exactly when it was established but there are certainly some Roman traces. Today, no one lives there, only tourists wander up and down the aisles, deciding on their own whether they will comply with the kind signs “The Directorate is not responsible of accidents that could occur when the route is not followed but deviated.” 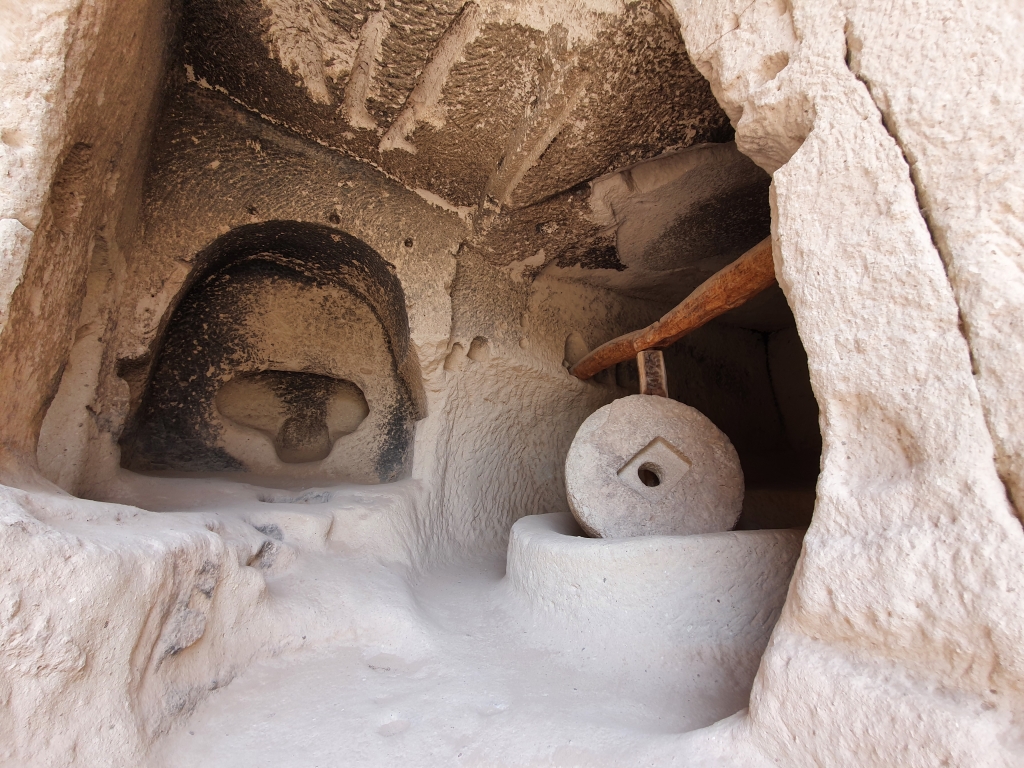 Let’s enter Valley 1. The entrance sign informed us that here we would find the bulgur mill, two pre-iconoclastic churches (Google told me that the iconoclasts were a medieval sect denying the veneration of icons as a form of idolatry) and a winery. We found the mill, as seen in the photo above, even combined with a bakery as far as I could tell. We could not identify the winery, and I think I saw more than two churches. Their decorations were frugal and kind of geometric, which is probably the connection with the iconoclasts in question. They consisted of stone filigree and crosses carved directly into the walls or ceiling, as well as a certain type of drawings in red color. There they are:

In addition, in Valley 1 we found many unidentified caves, holes, various openings and niches in the walls, probably related to the more trivial settlement life. What kept amazing me all the time was the degree of agility required of the inhabitants of such a place. I can assume that there was some kind of natural selection or survival of the fittest – either you learn to climb the rocks like a chamois and without any acrophobia, or you simply fall out of the selection. I didn’t like the assumption about which side I would end up on, but my companion fit perfectly in Zelve. 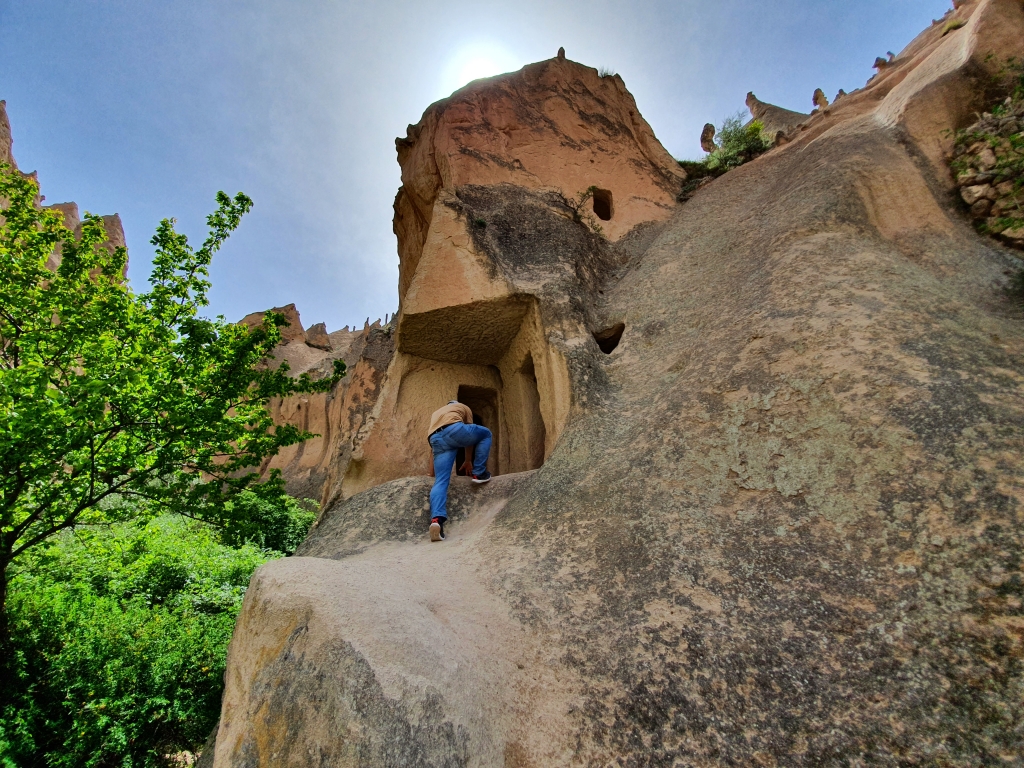 In Valley 2, we were promised (by the entrance sign) to see some dwellings carved into the rocks and the Church of the Holy Cross. In the dwellings, we had to guess again what was what, given that all the furniture except the one carved in the stone had long been gone. Rooms with smoky ceilings, for example, are traditionally considered to be kitchens where cooking is done over an open fire, but they could all the same be living rooms, where the family would gather to warm up in the winter, or they could be a combination of both. I personally stared in fascination at the several-storey ‘apartment complexes’, most of which were no-access due to the danger of collapsing. Soft rock is susceptible to carving, but also to rain and wind. How about your village looking like that? 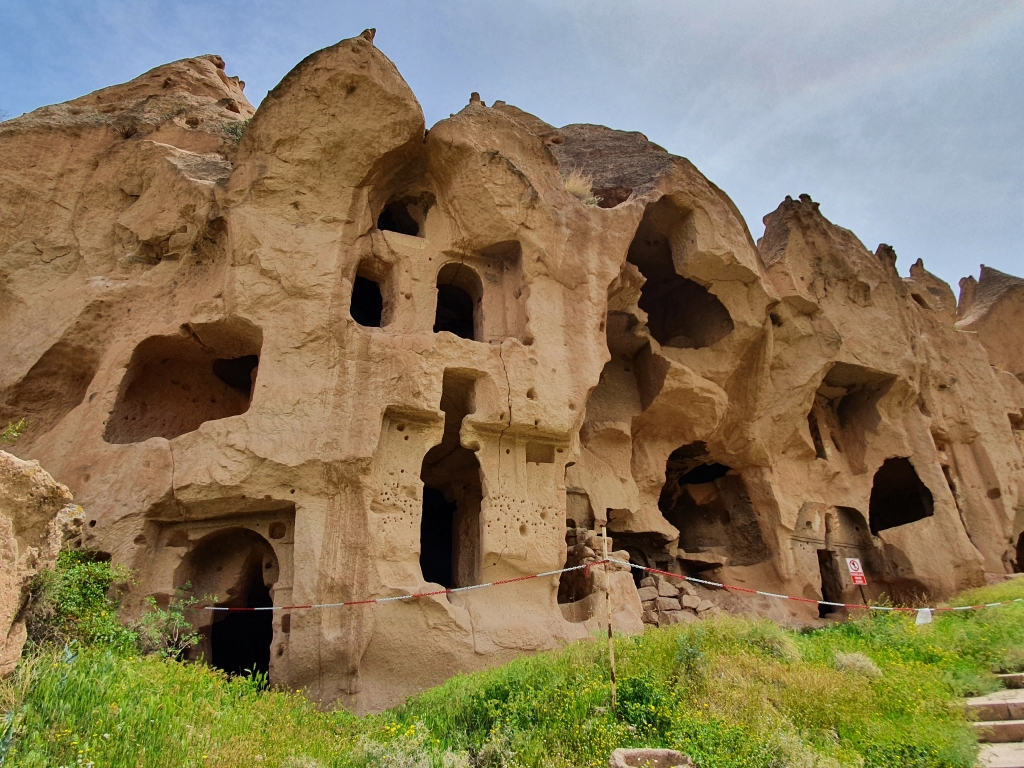 There used to be a 30-meter-long connecting tunnel between Valleys 2 and 3 dug into the rocks, currently closed for visits for the reasons described above. Today, the connection is made by the simple detour method, but it also offers great views of the entire surroundings of Zelve, so I find it an advantage. As we stood at the entrance to / above the third valley, just below our feet was the minaret of the village mosque, apparently from a later historical period. Opposite were more dwellings in the rocks, and on the left was the so-called “Monastery” – a complex of several floors, connected by a labyrinth of passages and winding internal stairs, currently also inaccessible. And between all these things, in the middle, was the village square. 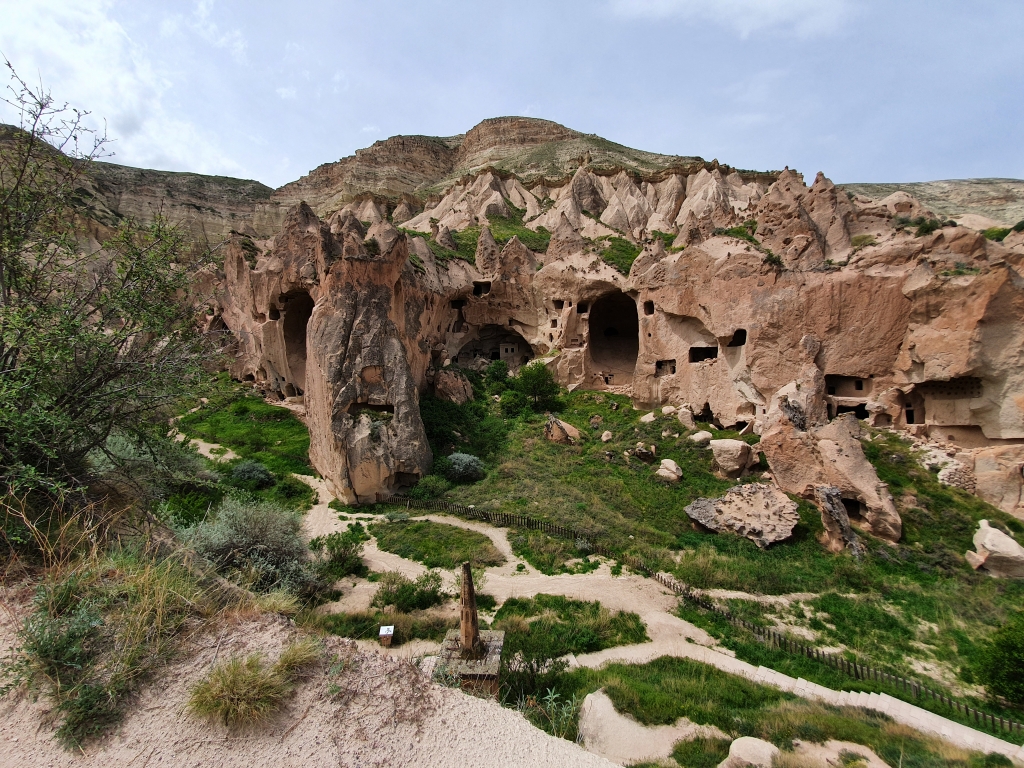 The path you see on the photo was going to the very end of Valley 3, where our attention was drawn to a strange-looking rock facade. Strange in the sense that it was equipped with the usual niches and openings, but at unusual heights, unusually small in size, and some even walled with bricks. A timely sign explained to us that these were dovecotes – something without which Cappadocia simply couldn’t do in the past. Curiously, during our stay we received several versions of this affect on otherwise extremely annoying birds. One was that they served as the local post office, the other that they were revered as birds of peace. You can guess the third one yourselves, considering that there were no chicken coops. In French cuisine, the pigeon is still a delicacy. 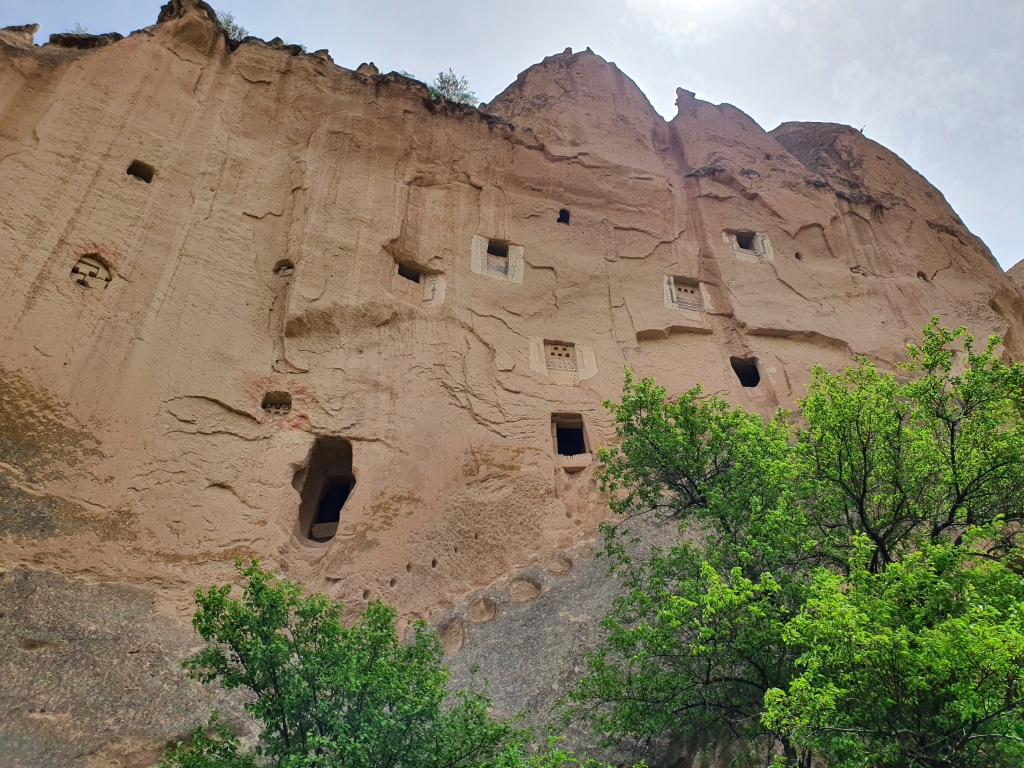 It is time to leave Zelve, but not yet Cappadocia. Expect the Open-Air Museum in Goreme, the village in the heart of the Wild Horses Land. We will take a look at the house of ceramics in the Guray Museum in Avanos. We will also take a walk in the Ihlara Valley, which begins (or ends, depending on how you look at it) with the amazing Selime Monastery. For dessert, I have left the underground cities of Derinkuyu and Kaymakli, demonstrating how volcanic tuff can be dug very well not only up in the rocks, but also down under your feet. For now, I leave you with the Church of the Holy Cross from Valley 2, which I mentioned before, but did not show you. 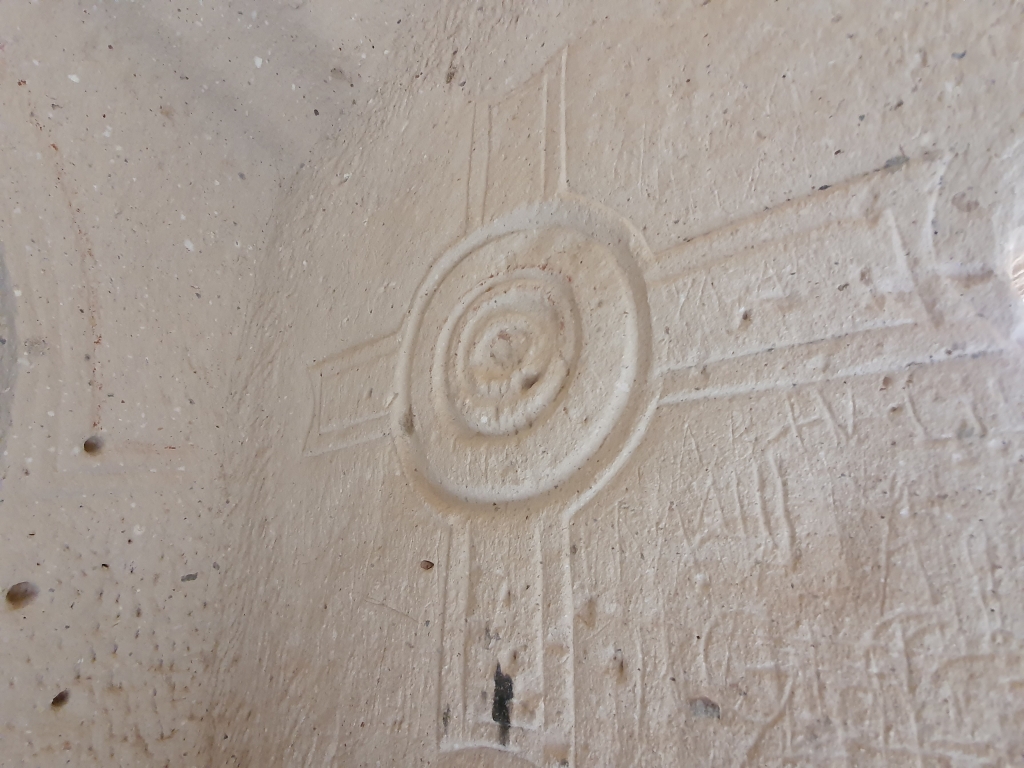