The Aegean coast of Turkey outside sea tourism

The Aegean coast of Turkey outside sea tourism

This is not snow, if you are wondering how there could be green bushes on it. It is calcium carbonate, first dissolved in the hot springs of Pamukkale, Turkey, and then crystallized in all possible forms. As the name suggests, it can be confused not only with snow but also with cotton (pamuk); anyway the place is unique. It is not exactly on the Aegean coast, which I call Ionian because of ancient Ionia which thrived here, but I am sure that there is hardly a sea holidaymaker in western Turkey who has not made a detour to the amazingly beautiful natural phenomenon. 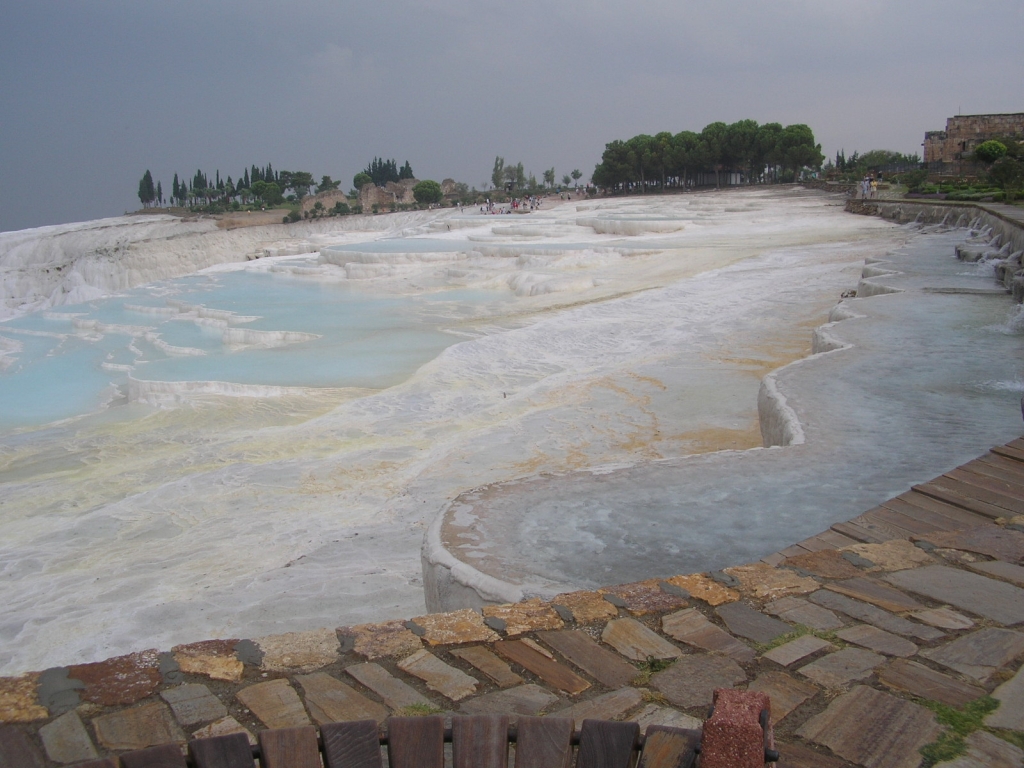 As a bonus, the holidaymaker in question will receive a touch of valuable cultural heritage in the face of the ancient city of Hierapolis. I guess you don’t expect either the ancient Greeks or the ancient Romans to have passed hot mineral springs by, without inhabiting them. The history of the city has gone through ups and downs, the last caused by a series of serious earthquakes. One of the latter left almost all of Hierapolis in ruins in the Middle Ages and allowed the calcium “cotton” to take over. Today parts of the city have been restored, much to our delight. 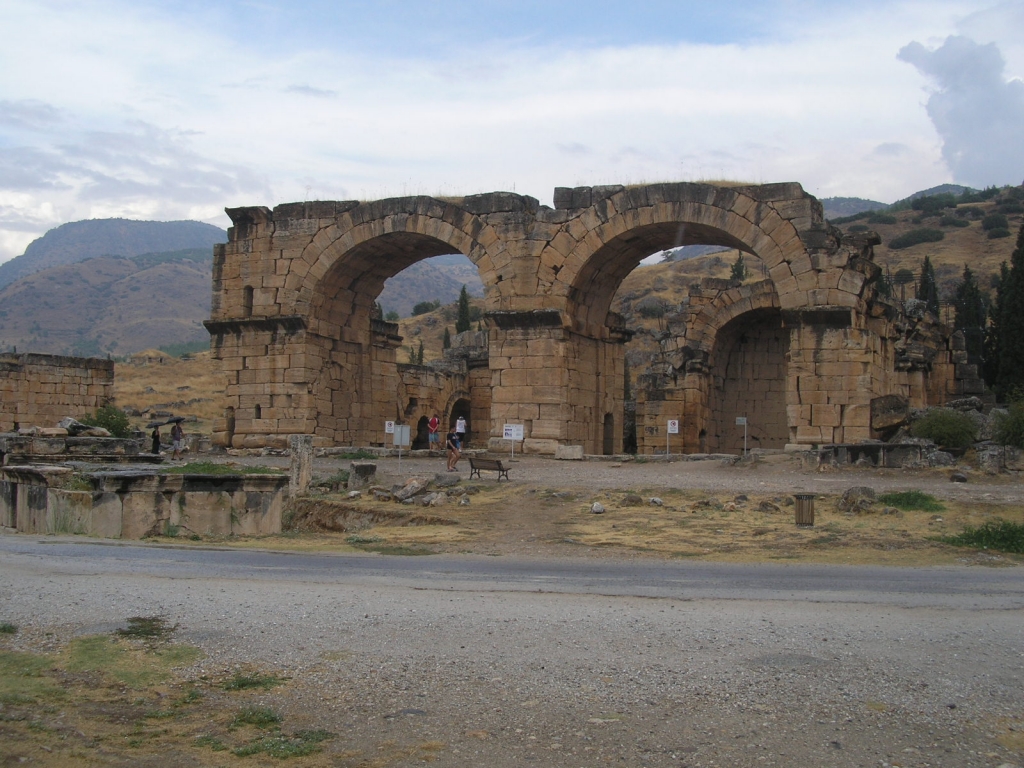 Not far from Hierapolis is another interesting ancient city of also Hellenistic origin and with the intriguing name of Aphrodisias. At least that’s how it came to us today, with the name of the Greek goddess of love Aphrodite, although it had several other names before and at least one later, from Byzantine times – Stavropolis or City of the Cross. And its fate is closely linked to the geological turmoil of the area; what we see today is the result of a series of successive excavations and reconstructions. Many of the finds are collected in the museum of the site, and some are exhibited outside, such as this wall, built of friezes left by the local theater. 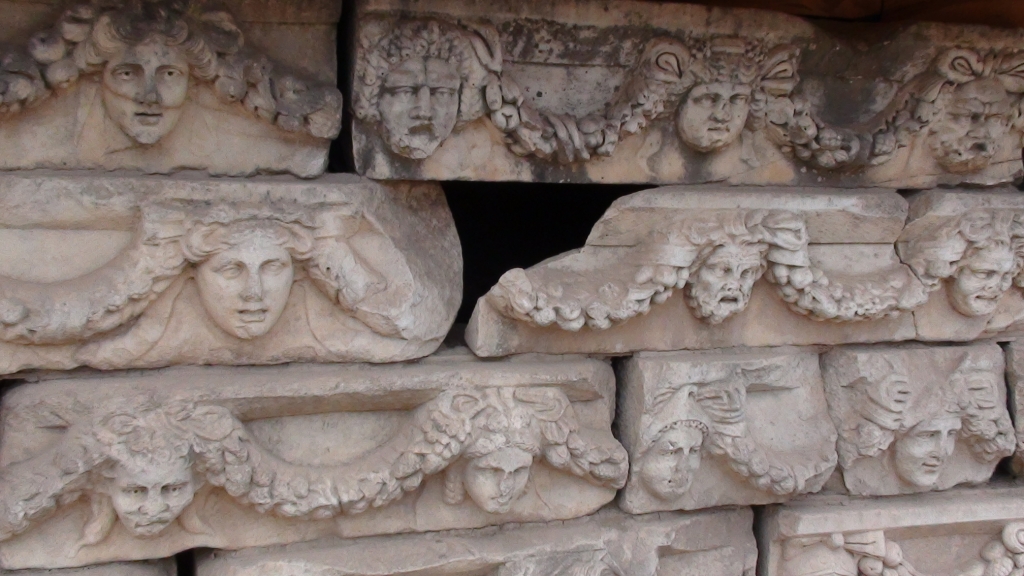 Returning to the Aegean coast, we come across a series of ancient cities that were sea ports some 2,000 years ago and are now miles inland. One of them is Ephesus, which I remember naturally with the Library of Ephesus – one of the most famous sights in Turkish tourism marketing, but also with the most terrible rain that has ever washed me. Paradoxically, the driest place at that time in a city of ruins and therefore lack of roofs, was an ancient fountain. And the mixed international group that we were part of and that occupied the fountain, I think, has set a record for rapid international cohesion. 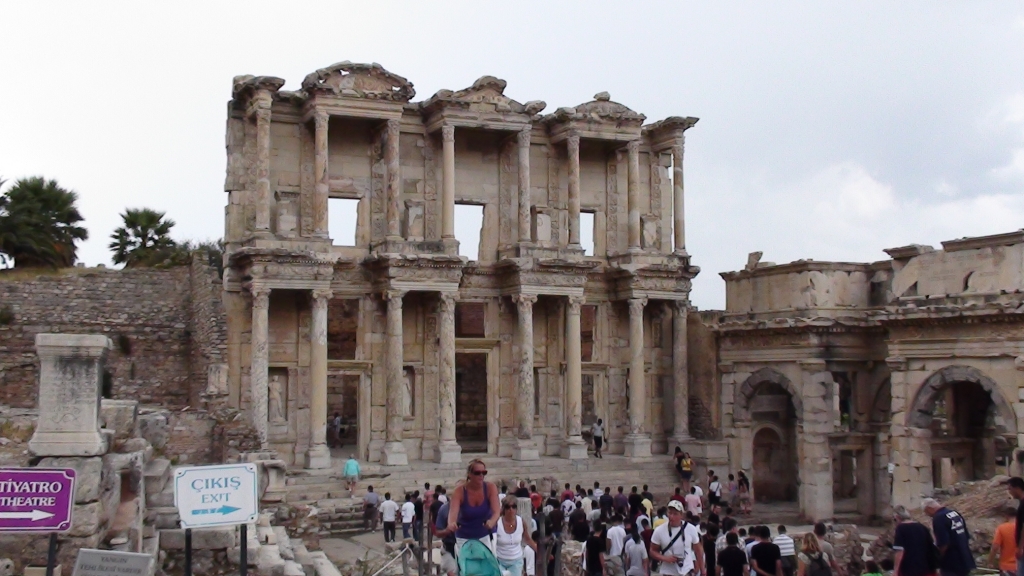 South of Ephesus we find three other important cities of antiquity, two of which I had never heard of before. For example, the first, Priene, was an important spiritual center because of the so-called Panionion, or Ionian sanctuary of Poseidon, and also played a role in the wars between the Hellenic world and the Persians. Today it is mostly in ruins, but its location is extremely picturesque, nestled among green hills. When the sea was on the other side of it, and it was whole, the sight must have been fantastic. 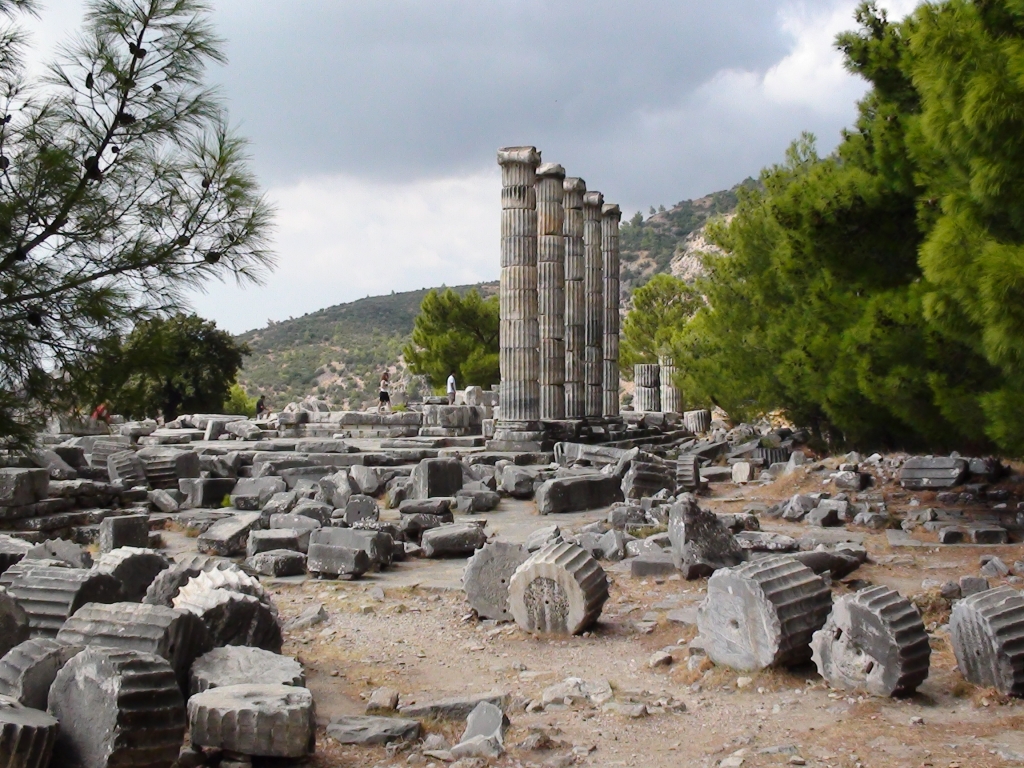 Further south is Miletus, whose School we studied in history classes, and I have a vague common memory of a group of bearded sages who doodled over ancient philosophy. The remains of the city lie in a dry and scorched plain; it is difficult to imagine that in the past it had four ports and an entire island in the Gulf of the Aegean coast, of which today there is no trace. The best preserved structure is the ancient theater, the other remains are scarce due to the devastation of the city by the Persians. The fact that a huge marble gate was excavated and taken to the Pergamon Museum in Berlin doesn’t help either. 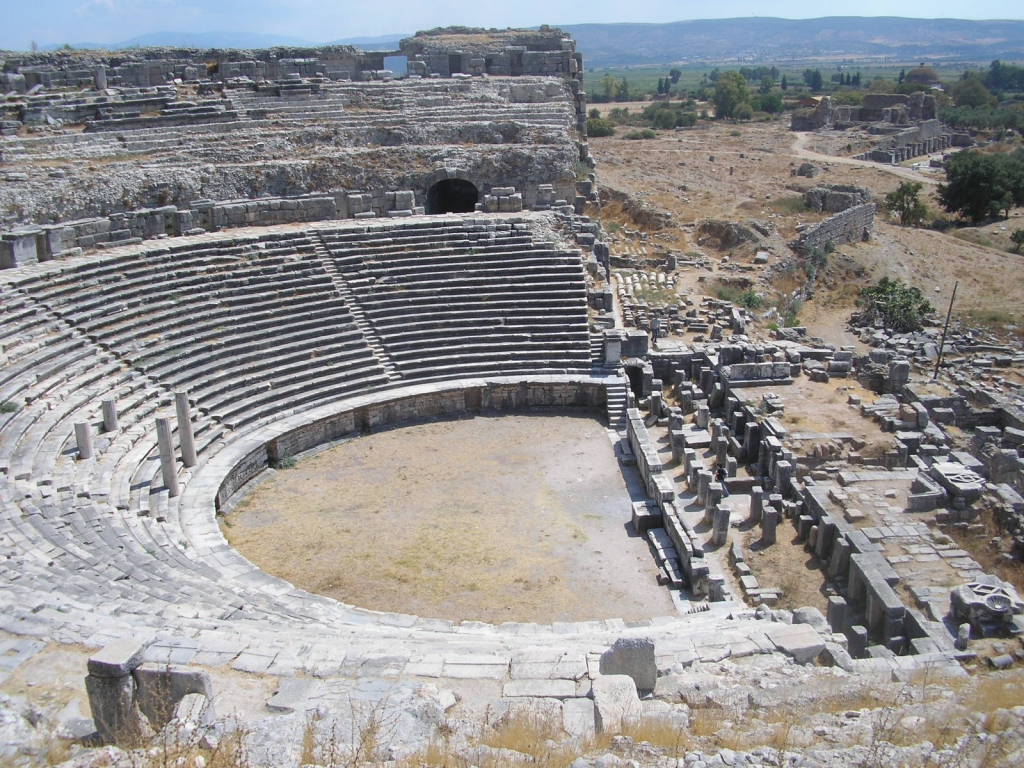 We can not miss the Temple of Apollo, which is located in today’s city of Didim, in the past – the sanctuary of Apollo Didyma. It is said to have been built over an older sanctuary of an older deity, and was also connected to Miletus by a sacred road nearly 20 kilometers long. The modern city splashes on the fence of the Temple literally like waves on coastal rocks, seems like it will be flooded any moment now. However, no one will say that the ancient site is squeezed between modern buildings. This is simply impossible because of its scale. This temple would stand out everywhere. 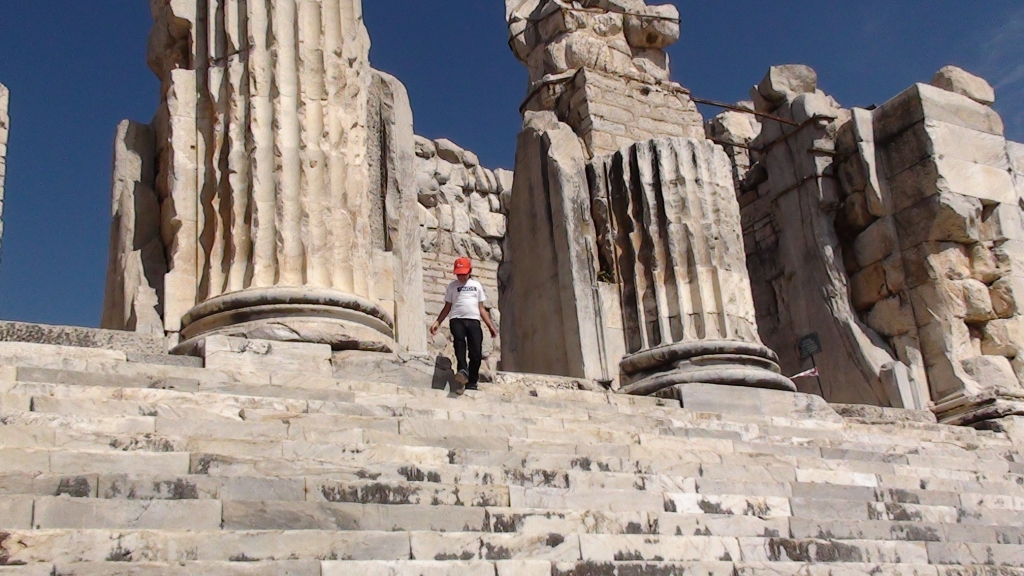 It is time for us to take a look to the north of the Turkish Aegean coast. The capital of the ancient kingdom of Pergamon,  attached to the present-day city of Bergama, is also a little inland, but definitely worth a look. You might make a connection between the name and the birthplace of the parchment. Even today, there are workshops where you can buy a parchment souvenir, although the prices are serious. In the Acropolis, the heart of the ancient city, there is not much left to see since the huge Altar of Zeus was sent to keep company to the Gates of Miletus at the Pergamon Museum in Berlin. A pleasant surprise for us was the Asklepion, a real spa resort from antiquity. 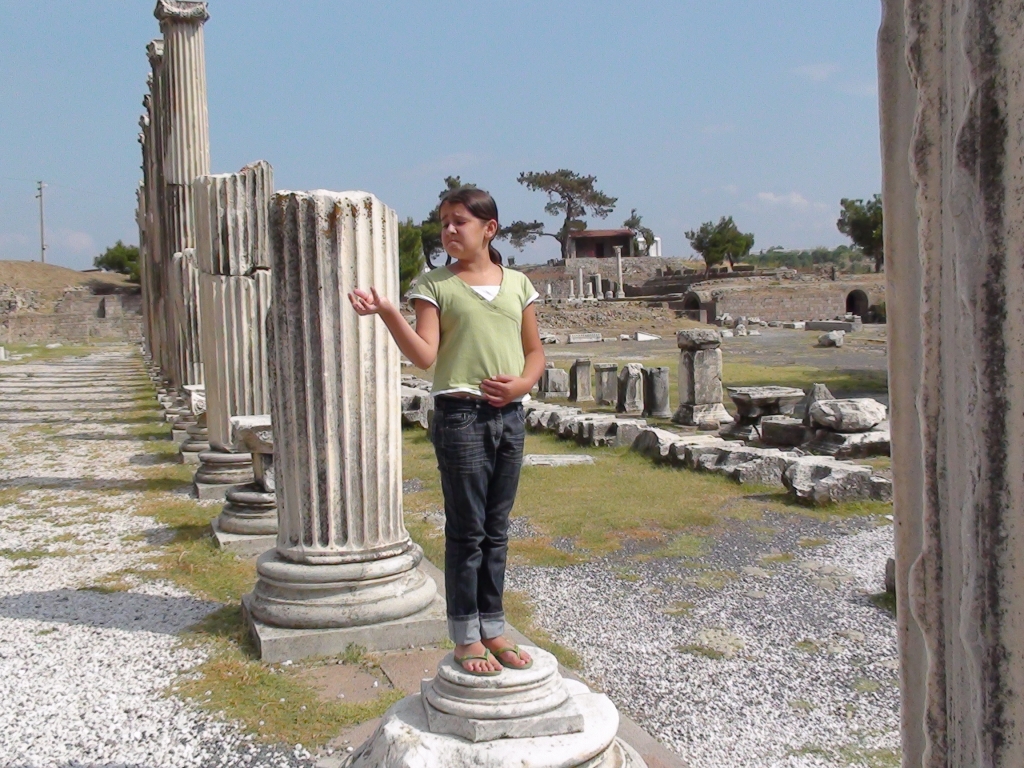 We will miss many more interesting places on the Aegean coast of Turkey, led by the ancient Assos (today Behramkale) and we will make one last short stop in Troy. To any fan of Homer and Brad Pitt, the tourist site will probably seem disappointing. A few remaining walls, hinted foundations of buildings, hinted theater… It takes a lot of imagination to like it. But if we leave aside the doubts about the competence of the discoverer Herr Schliemann, this is still Troy! The gods fought for her! Nowadays, the conquerors are represented by groups of tourists who make no attempt to hide in the belly of the legendary wooden horse; in my opinion the meaning of this facility has completely escaped them. 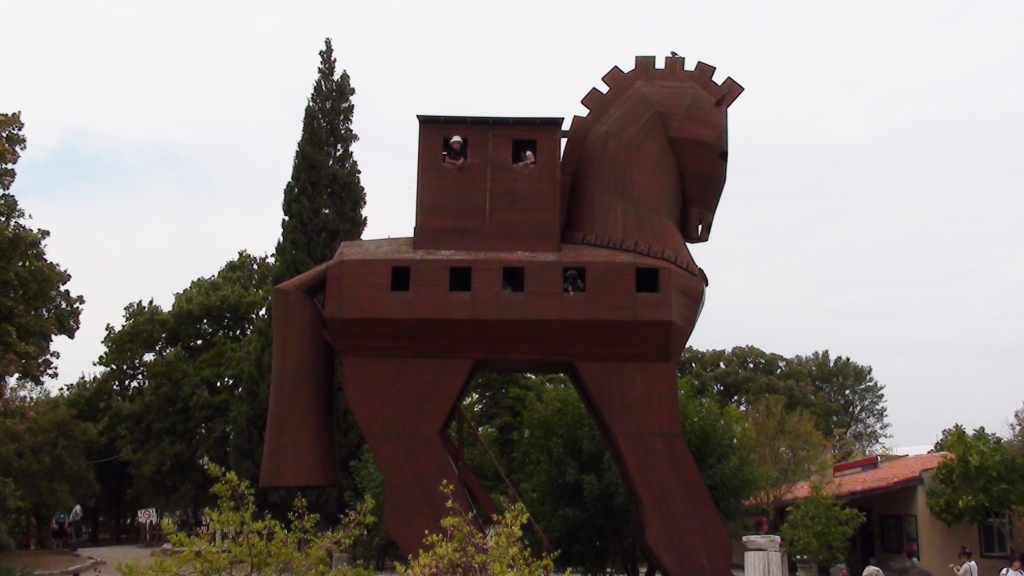 You can see more of Turkey in my posts about Istanbul – here, here and here.