Istanbul is a city with many faces, a city of contrasts, a key actor in four empires (Roman, Byzantine, Latin, Ottoman). A city inspiring various associations in its visitors, often polar ones – they either don’t like it at all or fall in love with it. I also wondered a lot during our visit, if I liked it or not. Finally, I decided that such a treasury of multi-centured heritage cannot be unliked. Despite the mixed feelings we, Bulgarians, have towards Ottoman heritage in view of our five-centuries tragic experience of a nation forcefully incorporated in the Ottoman Empire. I deeply stress that I never had, even for a moment, the slightest urge to visit any of the famous open markets of the town and mix with the crowds in a dense atmosphere of spices (and probably sweat). But I have heard there are some for whom this is the ultimate experience. Every person with their taste.

Wood inlaid with mother of pearl in a frame of ‘Turkish’ blue – how’s that to your taste? To mine – perfect.

So, the Ottoman heritage. Including a lot of very beautiful mosques, fountains, inns and others. To me, its heart lies in the central region of Sultanahmet, at the former Sultan palace – now museum – called Topkapi. A lavish complex overlooking the Bosphorus from above. It has full four courts. The first one is now a public park of free access, connected to the second one via the Gate of Salutation (I didn’t remember the Turkish name). The Gate in question, like the other similar constructions in the complex, is not just some door; these are whole buildings with rooms and inner passages. From the Gate of Salutation starts the nowadays museum.

This photo is from the Second Court where they used to have the regular army parades in front of the majestic Sultan. Followed by a ceremonial shared lunch on the court lawns. At the back, you may see the chimneys of the Sultan kitchens. I think it is the only place in the complex where photographing is forbidden now, I don’t know why. But you may judge about the size of the whole thing even by the number of chimneys. After all, someone had to cook the above-mentioned Sultan-and-army lunch. And there was this sign which informed us that, in the times of the greatest flourish of the palace, the kitchens had to cater for some 10,000 people from the Sultan’s household daily, and I haven’t misteken the zeros. I especially liked the fact that about 1/5 of the whole kitchen was the patisserie. Sherbet, Turkish delight, ‘halva’ and so on. I only didn’t see the dentist’s office. 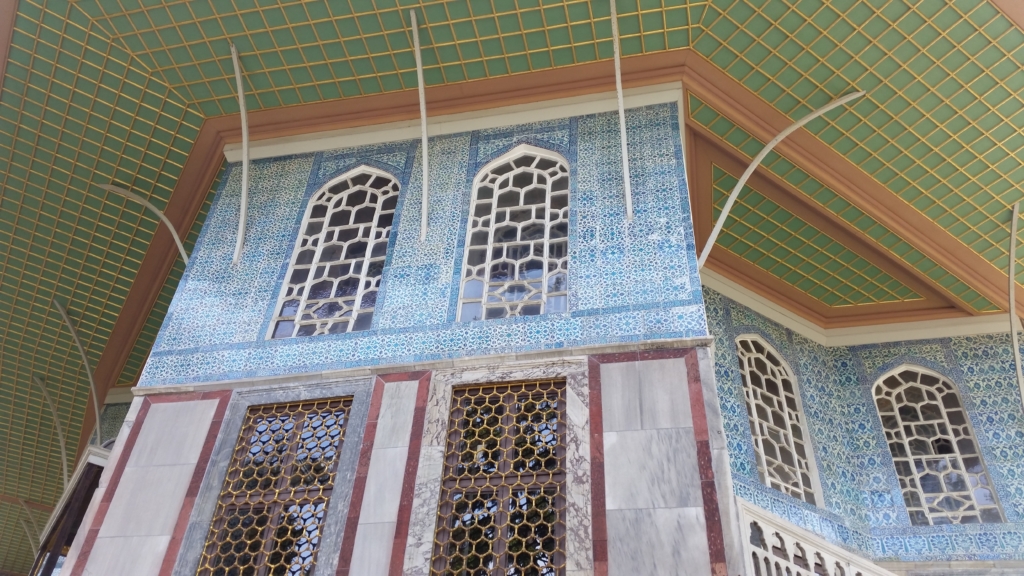 The Pavillion of Heirs (I think) in the Fourth Court of Topkapi.

The Third Court of Topkapi hosts the Sultan’s Audience Pavillion, prayer rooms and wonderful views of the Bosphorus. The Fourth and last Court was the realm of the Sultan’s heirs and sometimes the Sultan himself when he was not residing at the Harem. The Harem itself was a fully isolated complex within the complex (as it can be expected), the entrance to which is in the Second Court. It is located somewhat behind the Hall of the Imperial Council where the Sultan’s advisors used to gather. And where there is a small barred window on the side of the Harem, where they say the Chief of the Empire sometimes used to sit and inform himself how the debate among his advisors was going. Between the Harem and the outside world were the palace guards. 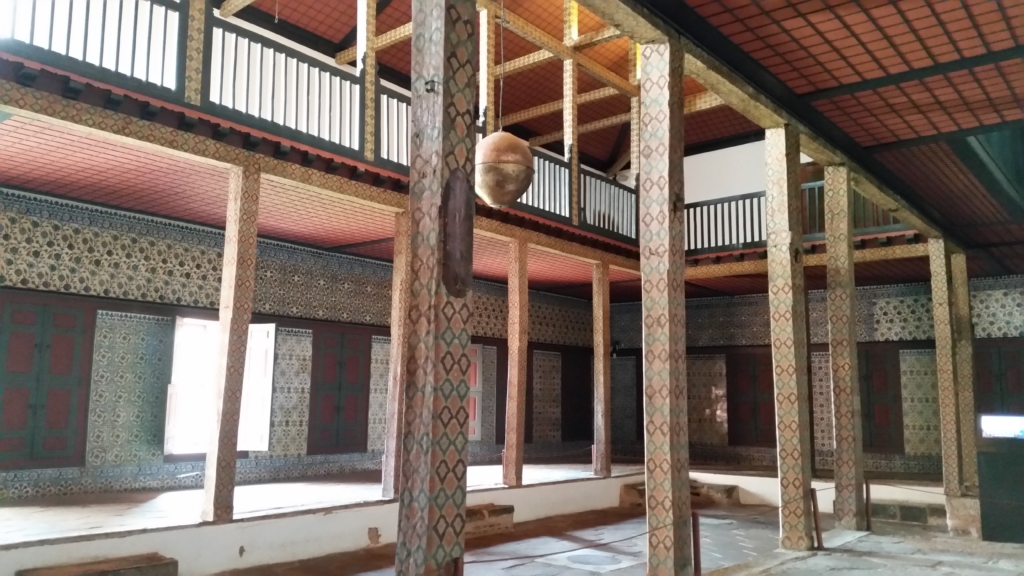 This is the dormitory of the guards in question who used to lay their matresses on the platforms. The ‘veterans’ slept on the lower level while the new recruits used the upper landings. It is most interesting that, while crowding in the bedroom in two layers, they were obviously not short of space as there is a whole large adjacent room called explicitly The Room for Smoking. Inside the Harem itself, there was also a very strict hierarchy topped by Valide Sultan, or the mother of the Sultan. Her chambers were in no way worse than the Sultan’s; and if all the Harem stories reaching the present day are true, the woman was an institution within the institution. 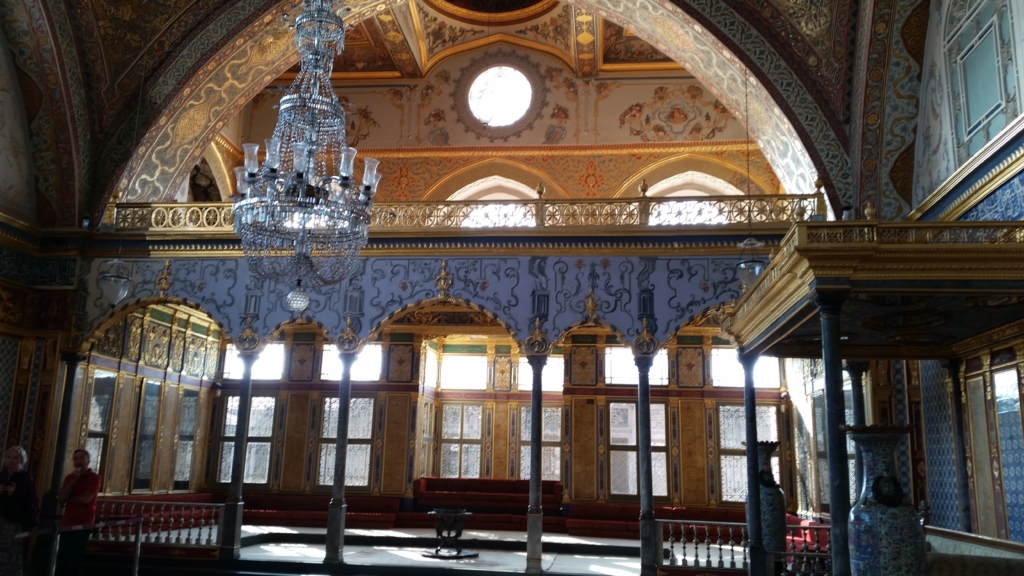 Lavishness is, of course, one side of the medal. The other can be guessed when you enter the so-called Court of the Favourites. A sunny and spacious yard hosting obviously the Home of the Favourites – the building where they accommodated those lucky Harem members who had succeeded to give birth to Sultan’s heirs. Cozy, pleasant, full of light. Until you pay attention to the fact that the Court is actually overlooking a very small patch of grass surrounded by high walls; and where they accommodated the poor non-Favourites, is something no one tells you. 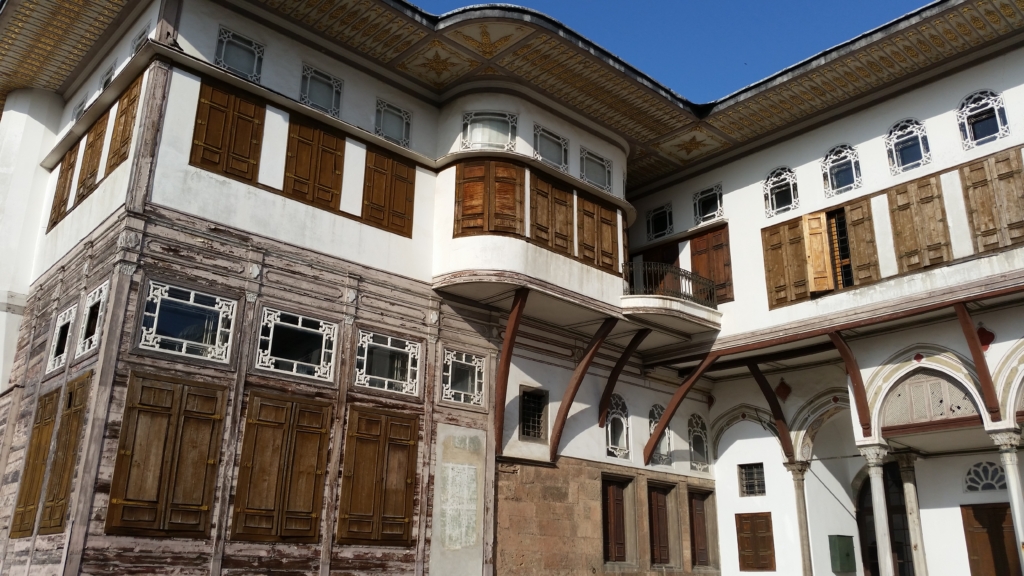 The Home of the Sultan’s Favourites

In the first half of the 19th century, the Ottoman Empire started a series of reforms bound to the desire for it to stop yielding Ottoman heritage and start yielding European such. At the middle of the century, the whole many-peopled Sultan household moved to a new residence in a ‘western’ style – the Dolmabahce Palace. They say its construction almost led to the bankruptcy of the empire. The grandeur welcomes the visitor even at the central entrance, after s/he has spent approximately 40 minutes at the ticket office queue. 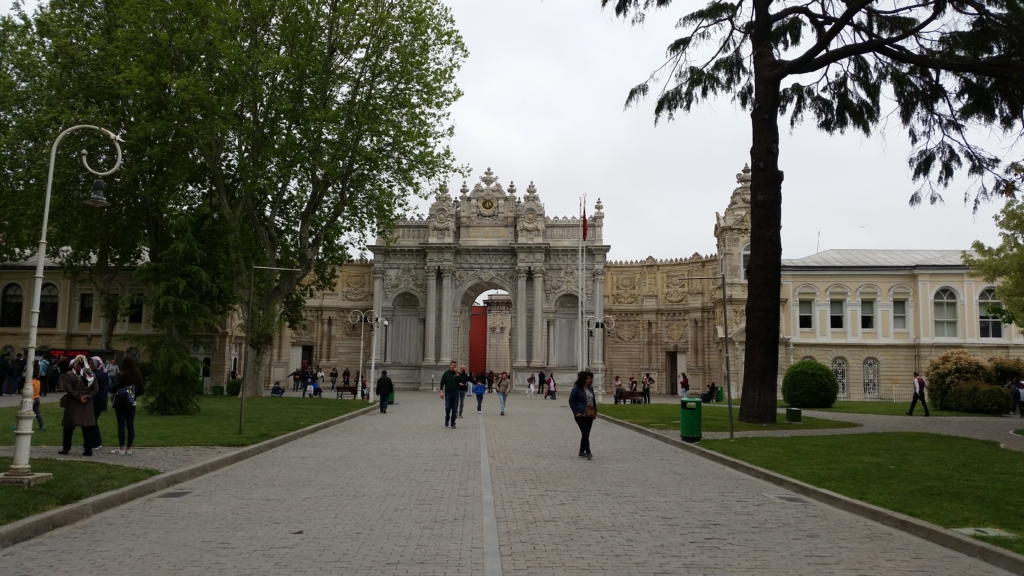 Inside the palace halls, it is forbidden to take photos for some unknown reason, so I cannot show you how the lavishness of the exterior flows into the interior. But I can assure you that it is a real pain to the eyes – from the thick bright carpets to the multi-coloured wall decorations and heavy pieces of furniture. The waters of the Bosphorus are literally washing the wrought-iron fence in which monumental gates are inserted to welcome the Sultan’s guests arriving by boat. Today, they serve only as a background to the visiting muffins, among which I hurried to find a place as visible from the photo in the beginning of the post. The task of the palace to ‘wow’ has been successfully implemented although to me, Topkapi carries much more of the idea of Ottoman heritage. That, surely, is also subjective but I’d like to finish by showing you how does the Ottoman Harem look in European style: