Where I am not

Home/World/Where I am not
Previous Next

Where I am not

It is very clear I am home. Socially responsible and worried about mothers, grandmothers, parents in law, etc. Where I am NOT, however, and was supposed to be, is Turkey. On April 11, we were supposed to leave our home in Blagoevgrad and head for Istanbul on our faithful four-wheeled carriage; stay there for two days and watch the tulips. Then we were supposed to leave for Cappadocia and watch the balloons. Really only watch them as for us as a 4-membes family with grown-up children, I’d probably need to rob a bank to be able to fly. But I am pretty sure that even the watching would be quite worth it. Well, instead of getting sad, I decided I could open my folders with photos from our 2018 Istanbul visit. I found out that some of my photos were not of the best possible quality but these small kebabs looked so nice… 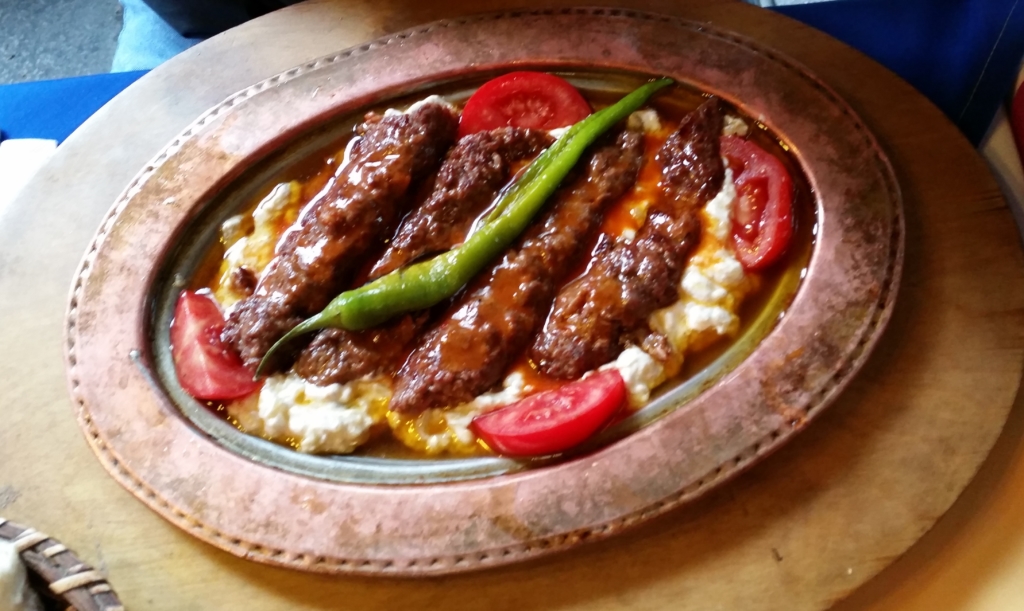 The beginning of May 2018 was, as supposed to be, sunny and pleasant. The views of the Bosphorus, as you can see from the photo in the beginning, were wonderful. We travelled through Greece, down by Serres and Kavala, and on the highway to Istanbul. As usual, from Xanthi on, we were almost alone on the road. Our choice of accommodation was not very successful as my main criterion for selection was the available parking space; however, it did have decent communications. Istanbul greeted us with waving red flags and photos of its president. 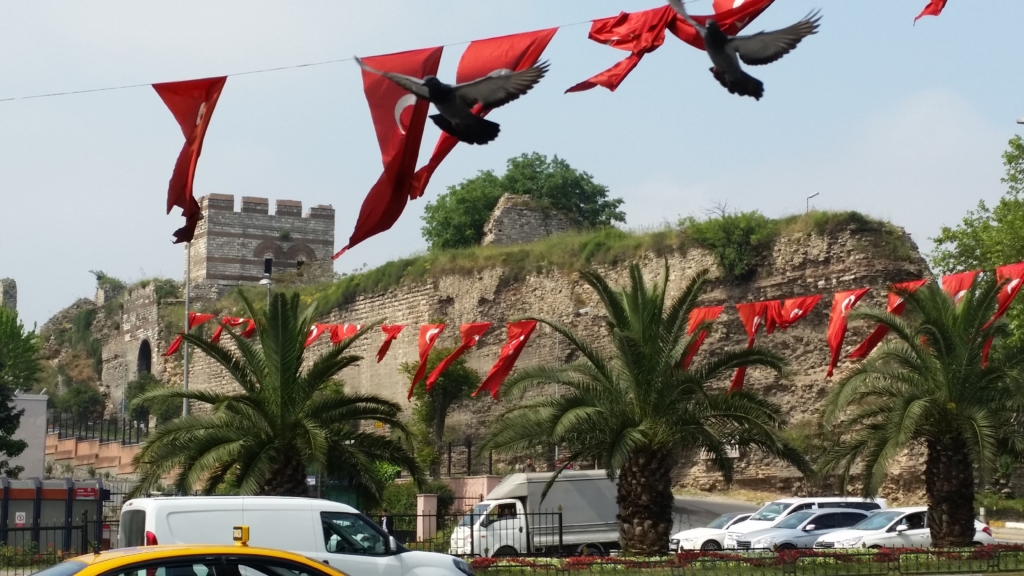 In the next days. we experienced a full pack of Istanbul: the terrible traffic; the huge contrast in the look of the main arteries and the small streets right around the corner; the high levels of pollution; the tourist over-pressure at some points, etc., etc. But this boiling pot of history has many faces and we were able to see many others. The complex in the heart of the old center – Sultanahmet – with the open spaces, the gardens, the fountains and mostly the two impressive buildings of Sveta Sofia and the Blue Mosque might be on the list of every tourist programme for Istanbul and sound like an incredible cliche but this doesn’t make it less wonderful. Unfortunately, the Blue Mosque evaded us in May 2018 as it was under repair and could be only seen from the outside. 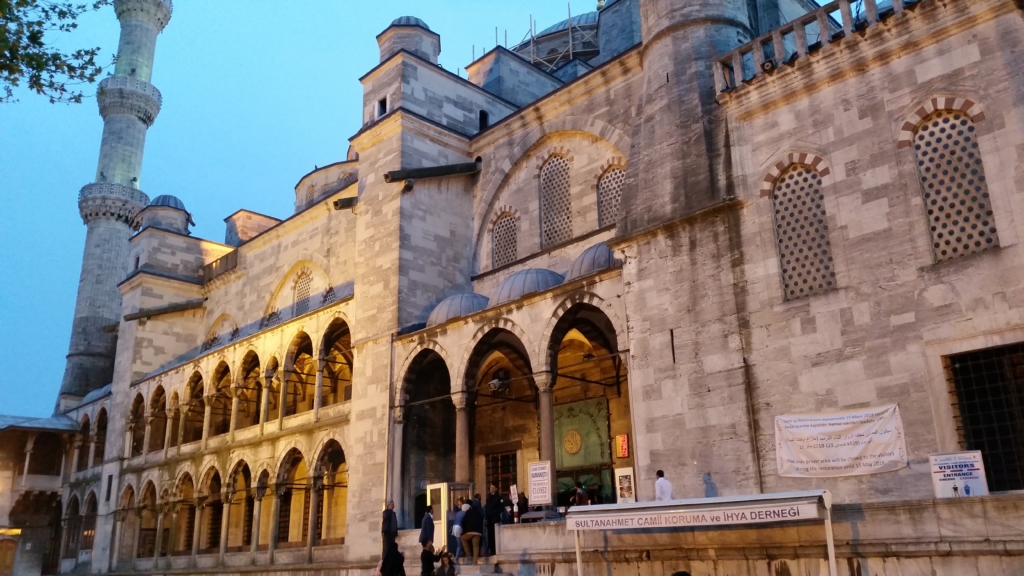 Sveta Sofia, on the other hand, or Aya Sofia as it is known here, was opened for visits although some internal repars were also under way. The former church from the early 6th century, then a mosque and now a museum site is impressive both from the inside and outside. Its size was meant to humble people before God’s Wisdom (which is what the name Sofia means). I once listened to a renowned architect giving a speech about Sveta Sofia and naturally couldn’t remember most of the professional terms; what I did remember though was that the construction of such an enormous dome which is still standing after so many years was a huge achievement at the time. 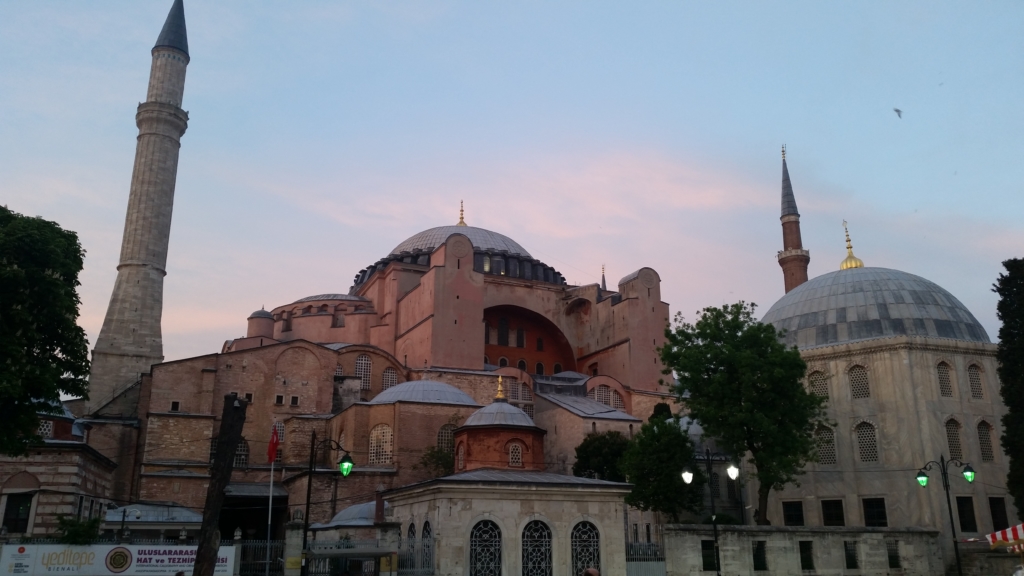 As I already mentioned, there are very many impressivle things on the inside too. The preserved mosaics with a lot of gold in the Byzantine style; the marble ‘bottles’, one and a half men high; the porphyry columns at the entrance which turned out to be very expensive and so were replaced with simpler ones at the back; the Viking graphiti on the stone parapets on the second floor – something like ‘Olaf was here’; the filigree on the walls of the inner library, etc., etc. I chose to show you a photo of Aya Sofia’s dome here, with the image of the Holy Mother and the baby Jesus which the Ottoman Turks decided to preserve when turning the church into a mosque. 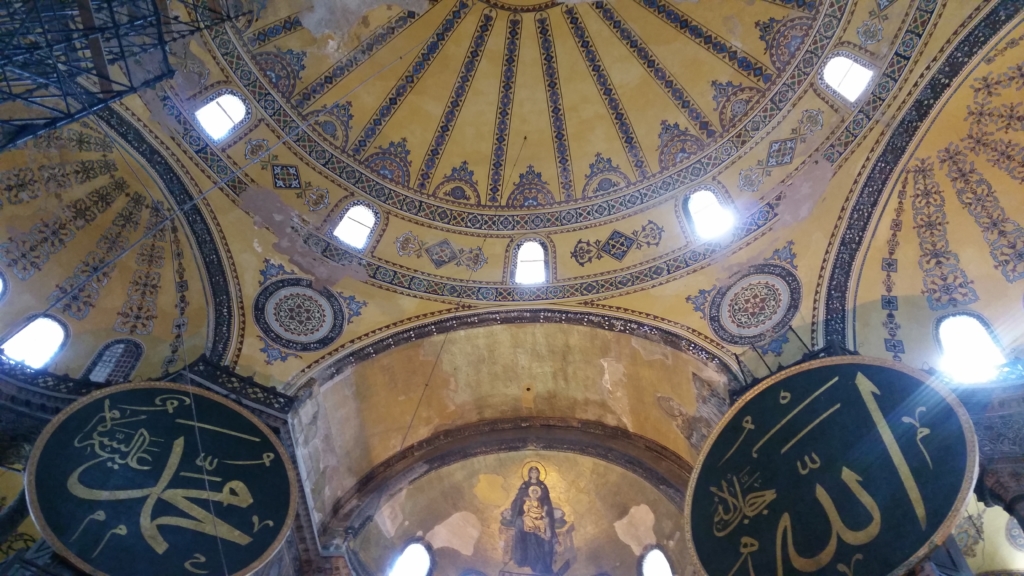 And while we are still speaking of temples, I will mention two more. I believe that there isn’t a single Bulgarian who’s traveled to Istanbul and not visited the so-called Bulgarian church or Sveti Stefan. It is also called the Iron Church because of the material in its construction. As far as I understood, it was a bit beglected and in a bad shape until not very long ago but we saw it already renovated and it looked beautiful. Iniside, they were selling re-published old books of which we happily chose one for the Bulgarian housewife from the early 20th century where they were explaining to us in the old Bulgarian writing style ‘how to save a chicken that has started to rot’. I was personally also impressed by the inscription running in large letters just under the roof edge of the house accross the street which I inexplicably hadn’t taken a photo of but it was announcing that the Sultan has given the Bulgarians a permission to build their own church. 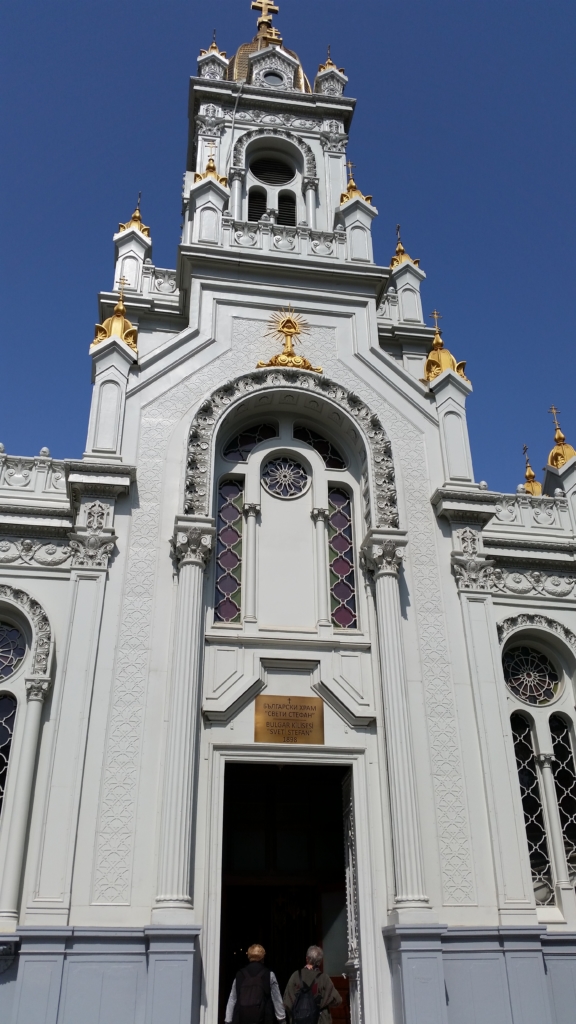 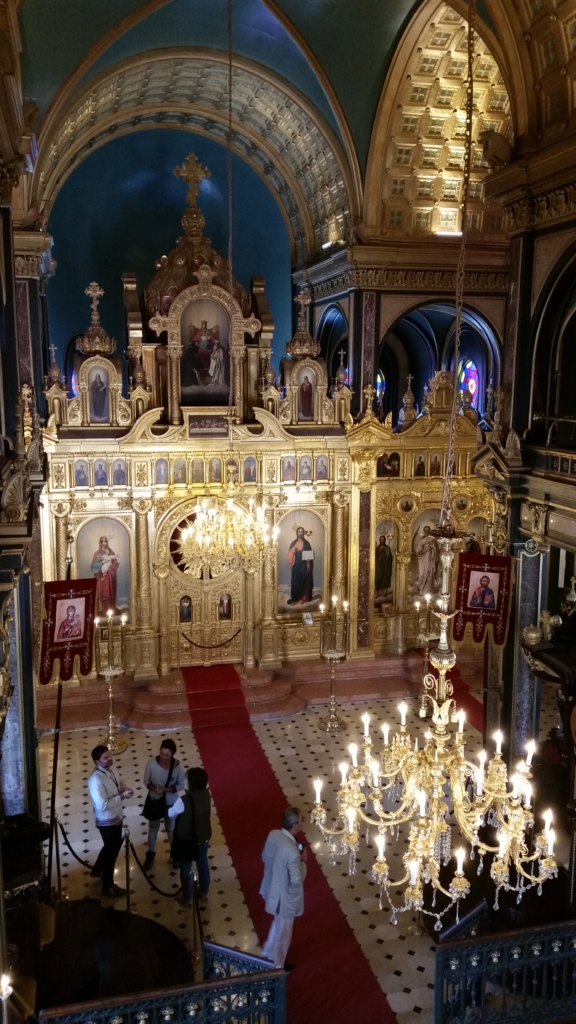 And last for today – the so-called church Chora or Christ the Savior. It seemed to me extremely difficult to find as it is located inside a quite densely populated quarter and despite the height, the domes and all else, you can only see it when you are right in front of it. It was also under big repairs so we could only enter some of the premises but we got the idea of why it is a museum now and why it is considered one of the most beautiful samples of Byzantine art. It was first built in the early 5th century but the golden wall-paintings and mosaics it is famous for are from the early 14th century. In the Ottoman Empire, it became the Kariye Mosque and today it is only a museum like Aya Sofia. My photos can in no way show the magnificence of the interior; it has to be seen ‘in the flesh’. I draw your attention to the ribbed dome on the right. 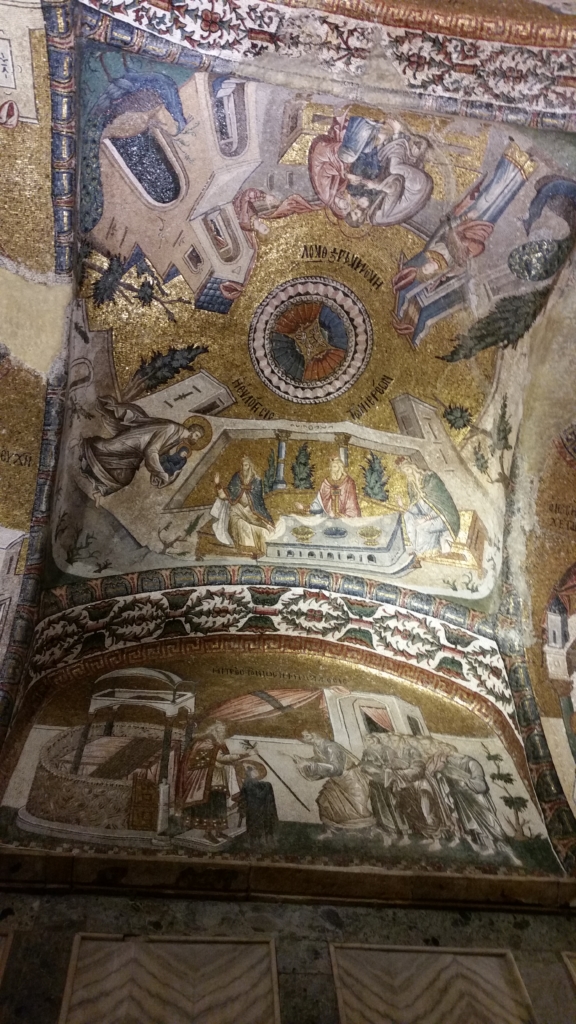 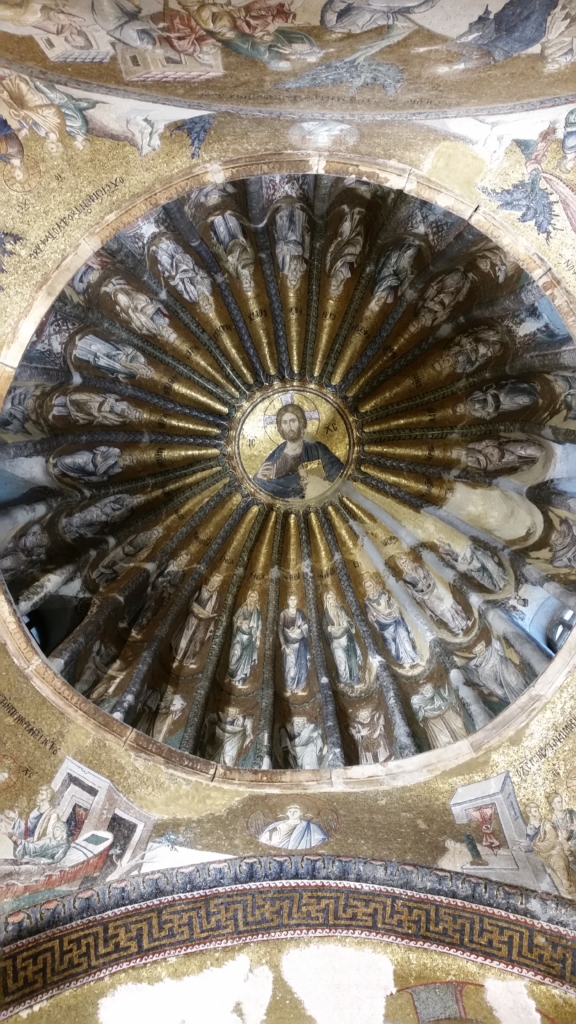 You can find more of my favorite places in Turley here.