The so-called Museum Pass gives a free or rather advantageous access to many museums in Istanbul. I suppose that most people visiting the city without a travel agent, i.e. who organize their programme themselves, make use of that Pass. It covers the Archaeological Museums but also Hagia Sofia and Topkapi Palace. I mean, while the first can often be skipped in favor of, say, the Grand Bazaar, the latter are usually obligatory for everyone. The Museum Pass does not include, unfortunately, the Basilica Cistern (the ancient water reservoir of Constantinople) which I find extremely impressive, as well as the Dolmabahce Palace – probably due to some reasons related to ownership and/or management. The Museum Pass is nonetheless a good decision and I highly recommend it.

This is one of the Archaeological Museums which are a whole complex located right beneath Topkapi. On the photo, you see the so-called Tiled Kiosk which hosts the Museum of Islamic Art; his comrades are the actual Archaeological Museum and the Museum of the Ancient Orient. The complex is completed by small gardens where you can give your exhausted museum feet a break, accompanied by some tea with sweets. The Tiled Kiosk was built in the second half of the 15th century by the then-Sultan as a ‘Palace for Pleasures’ – whatever that meant, and has been a museum since the mid-19th century. I don’t know much about art so I usually skip such museums but this particular one was full of my favorite bright painted tiles so it won my attention. This is how I learned about the Iznik period (15th-17th century), the time of the best and of highest quality period of tile-production in the Ottoman Empire, bearing the name of the city that was the heart of that produciton. Here are some awsome tiles for all who love it just like me: 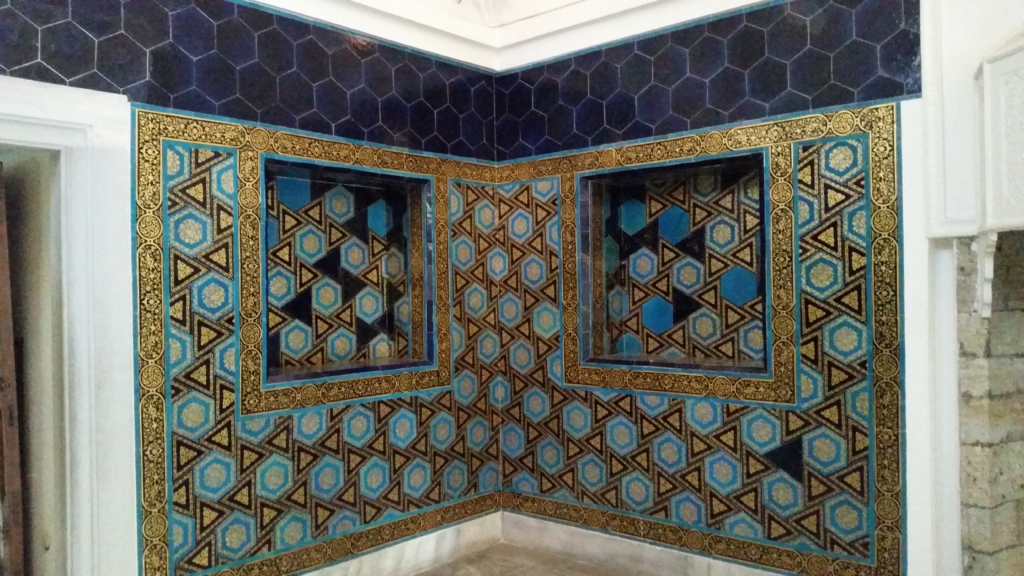 In the other two museums of the complex, you can find all sorts of interesting little things. More painted decoration tiles, including from the Byzantine period. Statues, dressed in incredible stone draperies and with amazingly detailed hair-cuts and beards. Honourable family bas-reliefs from the entrances of the family tombs, showing the heads of all family members buried inside. I had long wondered how exactly they added new heads on the bas-relief when they were about to bury a new deceased family member; whether they replaced the whole tablet or they left space in advance – but how would they know how much space to leave?! I finally asked a curator and found out that they used to depict the family members as per the time of tomb construction, including the children, with the idea that all these would eventually one day be buried inside. It is still unclear what happened to the spouses of those children later on, but I left it at that.

Speaking of interesting museum stuff, my list contains those delicate small pipes from the water supply and sewerage system of Constantinople. Plus the collection of sarcophagi some of which are conventional in the sense of a stone box with some decorations on the sides. But some of these boxes have whole sculpture compositions on top, obviously to glorify the owner/s. Others look like giant wrapped stone babies with fluffly cheeks and curls. Not to miss the clay cunei-form tablets; as the great Terry Pratchet used to say, it requires certain skills to engrave your will on the head of a pin. I draw your attention now to the following little collection of ‘documents’: 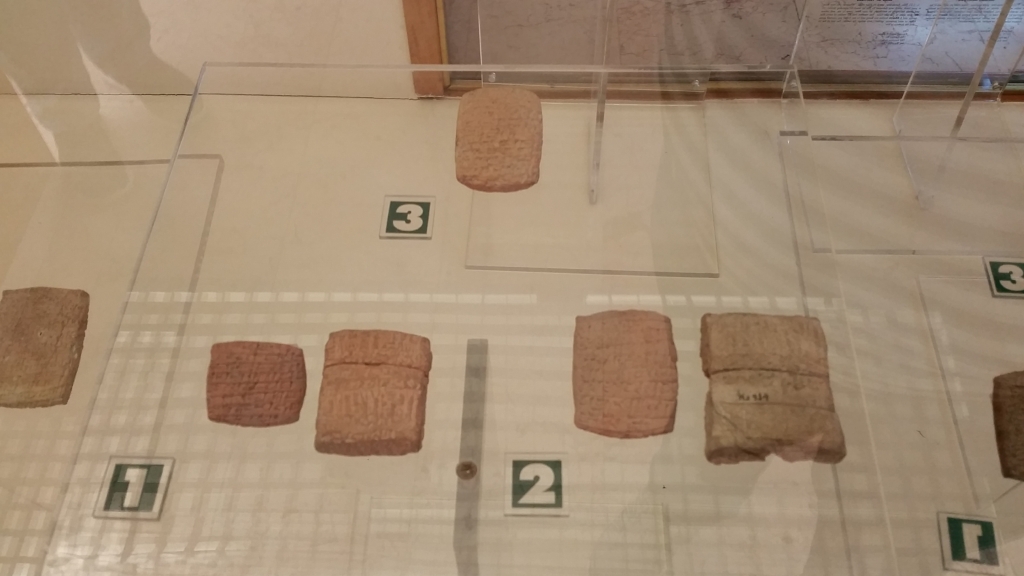 Number 1 is a contract for a money loan saying “Maru owes to Adod-rabi 30 g of silver. He must weigh out the silver by the harvest time. If he does not pay, he shall be endebted to 48 g per month”. Looks like serious stuff to me. Number 2 is even more serious and to our modern concepts – cruel: “Lady Saluata bought Sulu; his mother sold him with his price. If anyone lays claim on him, his mother shall pay 30 g of silver.” I clarify that these tablets date to the 19th century BC and are written in an ancient Assyrian dialect. Number 3 is a letter (!) concerning the lending of money in copper. The sender tells the receiver, Assur-nada, that s/he has borrowed 1800 g of copper from the house of the merchant, so that Assur-nada’s son and daughters could live through the past month. The dad is urgently required to send silver, including interest, with the first passing traveler, so that the children do not starve. 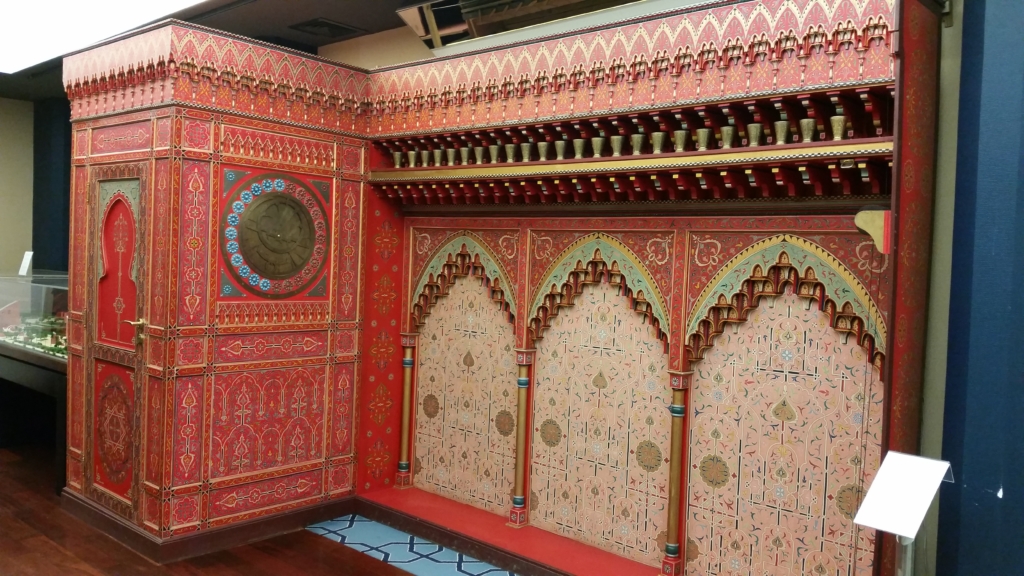 I assume that many people, even those who did buy the Museum Pass, have skipped one museum which is also located beneath Topkapi and has the tongue-bending name of Museum for the history of science and technology in Islam. I assume this by the fact that we were almost alone in the above museum while there were huge crowds in Topkapi. And there are some very interesting little things inside too, like this installation on the photo above which, to my greatest astonishment, turned to be… a clock. A piece of furniture the size of a whole wall which according to the sign was a water clock, i.e. it measured time with the help of water, only don’t ask me how. There were ancient hand-granades, models of strange-looking installations for extraction of water or stars-counting. I have picked to show you the intrument set of an ancient Islamic doctor, and not an ordinary one but an eye specialist.

Not mentioning the very number of instruments for treating the eye, I shall say that many of those look sinister. In two words, I don’t even want to know what their purpose was. But this damn curiosity… This strange instrument, for example, at the bottom right corner was said to be “used when an awn or something of that kind falls into the eye”. The one to its left was “to remove whatever sticks to the inner side of the lid”. While the innocent-looking scissors at the top row to the left of the lid-cleaner turned out to be for “cutting eye-lids” (?!?! ghrrrrr). Like I said, you never know what you can find in a museum. Too bad that most visitors who I have observed even in the most famous museums or better exactly in those museums, go through them like on an airport fast lane, only unlike the fast lane they turn their heads more often to the left and right…

And now I’d like to take you to my favourite among all museums in Istanbul which I included in our programme for the sake of my boys who sometimes get too much archaeology. I joined them only not to waste time, and this turned to be a great decision. Of course, everybody has a taste of their own but if you are a museum fan like me, you will appreciate highly the design, organization, customer care and the overall visitor experience in this museum. Regardless of whether you are interested in trains (real or models), boats or automobiles. The museum bears the name of its founder – Rahmi M. Koc – whom I had never heard of before our visit. And he turned out to be a Turkish billionnaire and public figure, also a collector, who not only gave all his collections for the opening of a museum but persuaded other rich people to do the same. The above photo shows a plan of the museum which occupies a rather large area on the banks of the Bosphorus.

I already mentioned the train collections, but there are also dolls, doll accessories, children’s tea sets and whole doll houses. The latter are OK but if you haven’t seen a doll wagon, there it is on the photo. The collection of bottled ship models is such that Captain Jack Sparrow can only envy it. The real boats, yachts, cars and even tractors, fire trucks and all other sorts of vehicles are truly impressive – you may get a vague view by the photo in the beginning of this post. In addition, there is the yard of airplanes, helicopters, trains, trams and similar. And the best is you can go inisde all of them, whether on the passenger seats or in the pilot cockpit and the driver’s seat. Even if it was a horse wagon. 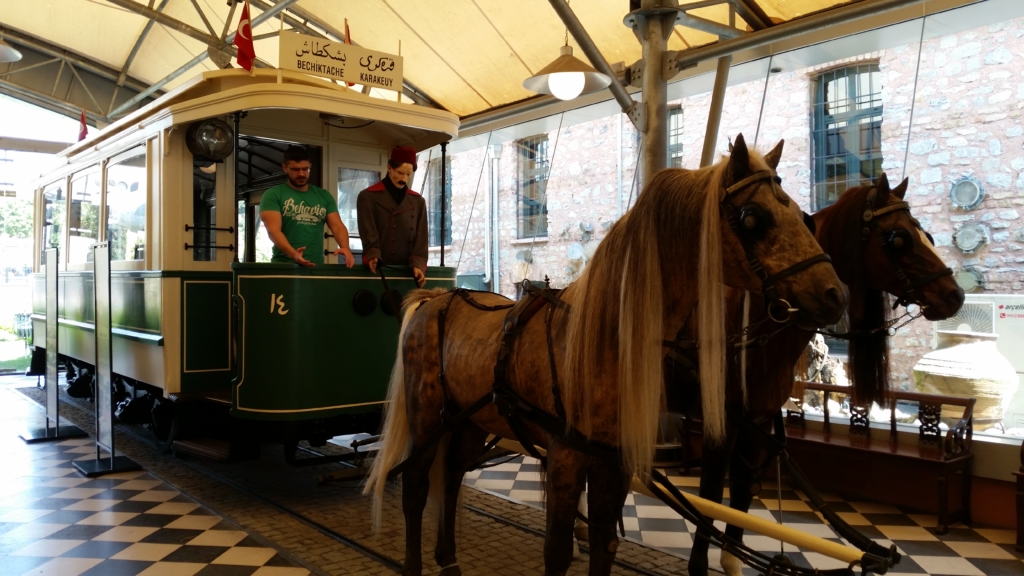 As a finale, I will mention the guided tour of a real submarine which the Americans scraped at some point and donated to the Turkish Army. This tour is paid for separately and photopraphs are not allowed. Our guide was one of the former sailors who served on this very same submarine – a short guy who explained they didn’t take tall or fat people in. For the reason that the whole crew had 84 members, jammed in tiny spaces where our tour group of 12 people scarcely passed through. We had a 2-meters-tall Dutchman with us who succeeded to hit his head in every possible edge of the interior. I can only recommend that, should you visit the Rahmi M. Koc Museum, you don’t miss the submarine, you will not regret it. As a proof, I post hereby our smiling faces after the tour, at the only spot where photos were allowed, that is on top of the submarine: