About the Roman SUPER ticket

About the Roman SUPER ticket

In today’s foggy morning, I have chosen to tell you about the so-called S.U.P.E.R ticket – or Seven Unique Places to Experience in Rome. It is, in principle, a wonderful idea of a mechanism to manage the huge tourist flows; a measure that Rome has a dire need of. The above ticket is the only way of visiting seven relatively recently opened sites to the public in the Roman Forum (the old imperial ‘navel’ of Rome) and the Palatine (the old imperial hill towering above the Forum). You buy the ticket online and it is valid for two days; the choice which two days exactly is made by online booking after you check for available dates and times. The numbers of visitors to two of the sites are srictly limited, so it is up to you to make your plan. As I said, I deeply approve of this approach in principle, if only it did not become a victim of the general organizational chaos ruling over the general Roman tourism. After 10 days spent in this very chaos, I came to the conclusion that it is all a very complex plan to create jobs for as many local people as possible as, without hiring a guide, you are very unlikely to find even the entrance to the Forum and Palatine, left alone the Seven Unique Places. 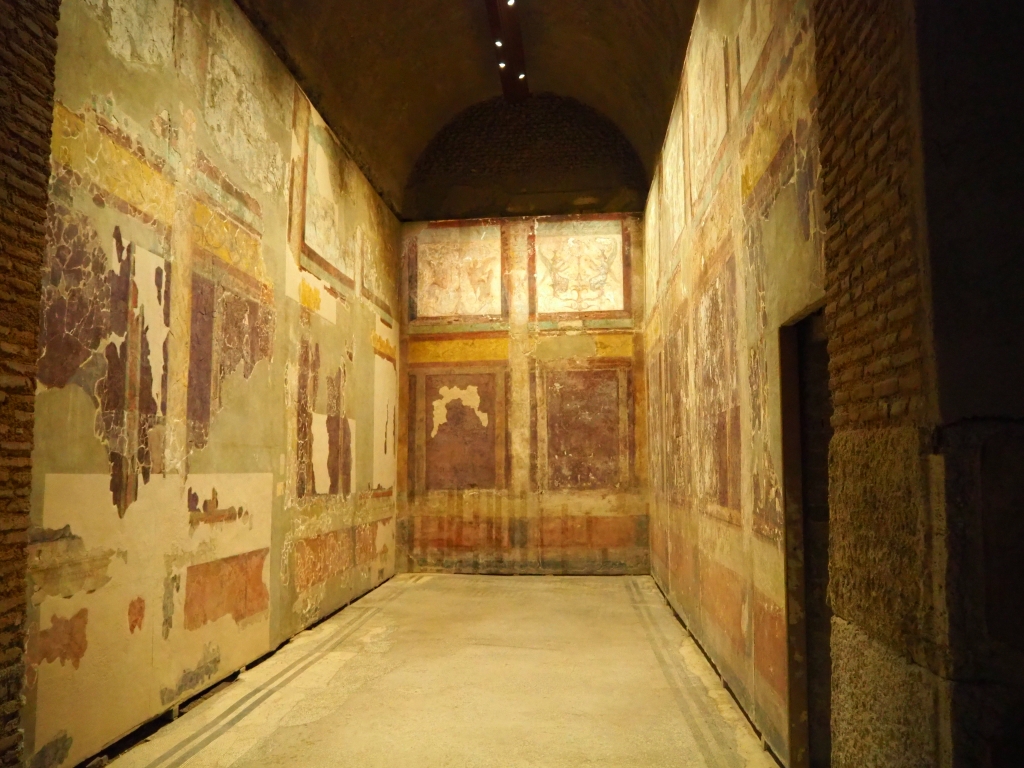 Our visit starts with a speedy run towards the Roman Forum on a full stomach and at 26 degrees C, clutching at the precious SUPER ticket. At that moment, we are still not quite sure it will work as it was bought from a randomly chosen web site among the several offering it. We have, however, to present ourselves at 1.30 PM at some House of Livia on the Palatine Hill; and if we miss that appointment, we’ll not be able to enter again. We are saved by Google and mobile Internet as there are no on-ground signs whatsoever. By miracle, we succeed to find the House at 1.20 and join our group. The House was opened for visits only in 2017 and offers an interactive tour of about 30 minutes for groups of no more than 23 people. Livia was the wife of the first Roman Emperor Octavian – Augustus, and there is a small but beautiful part of her house preserved, giving an idea what Roman high-life homes used to look like (see the photo above). 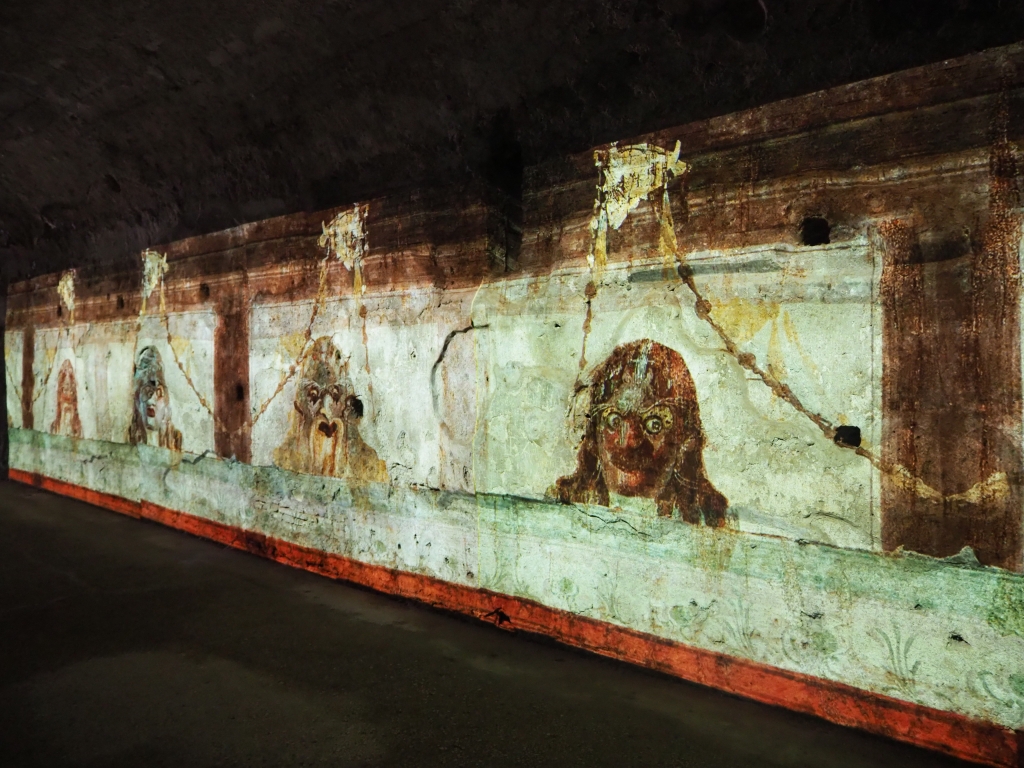 Quite the Roman way, the Seven Unique Places ar enot open at one and the same times, so we hurry to visit those which are open today and closed tomorrow. This includes the Criptoportico Neronico (the underground passage of Nero) under part of the Palatine, where they project images of still standing decorations of old Roman houses on the walls of the tunnel (see above). It also includes the so-called Temple of Romulus which we never understood what it has to do with Romulus; at the moment, you can only enter the round ante-chamber as the Basilica of St. Cosma and Damyan was built on top of the rest during the Renaissance. I only liked the huge bronze doors which were carried away somewhere in the late Middle Ages by some pope to decorate some late religious masterpiece but are now luckily brought back. 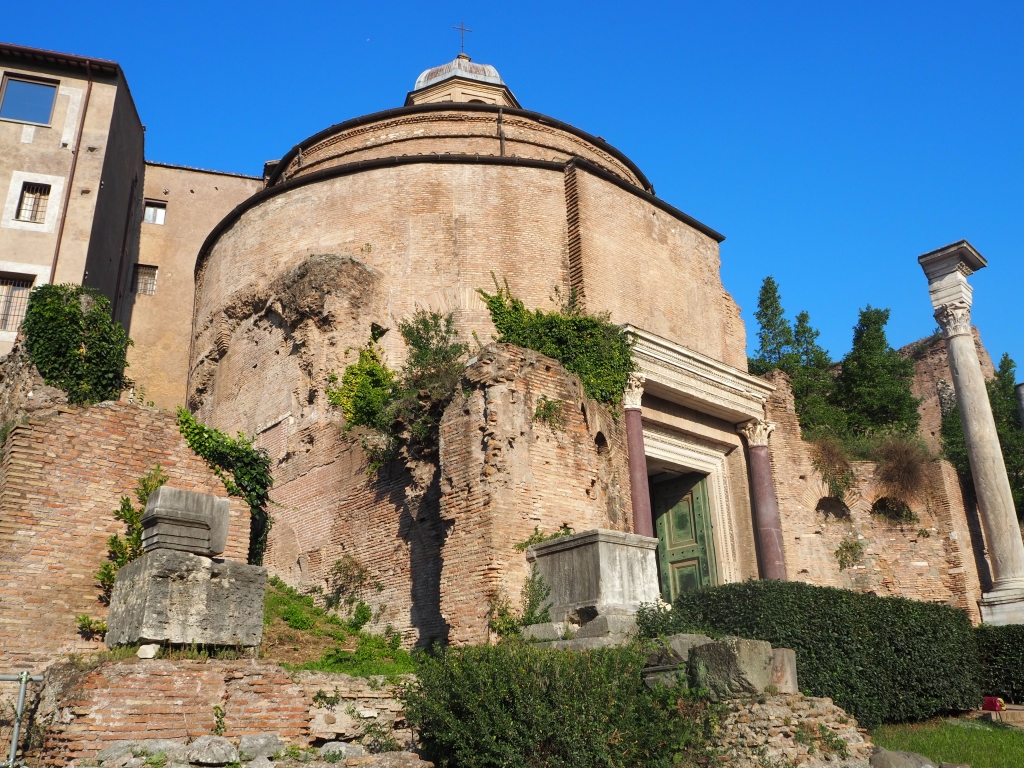 The fourth site is the “Church of Santa maria Antigua with the Oratory of the Fourty Martyrs and the Ramp of Domitian”. Tell me about this tourist hodge-podge. We find a preserved section of an ascending covered corridor which used to connect the Forum with the Palatine – and we decide this should be the Ramp of Dimitian. At its base, there is an early-Christian church with a rather Byzantine look – which we decide is the ancient Santa Maria. As for the Oratory, we discover a semi-rotund domed room with remains of Christian murals, among which a group of barely visible figures had been sentenced as the “Fourty Martyrs”. The traiditonal Italian lack of information does not let us learn anything else. 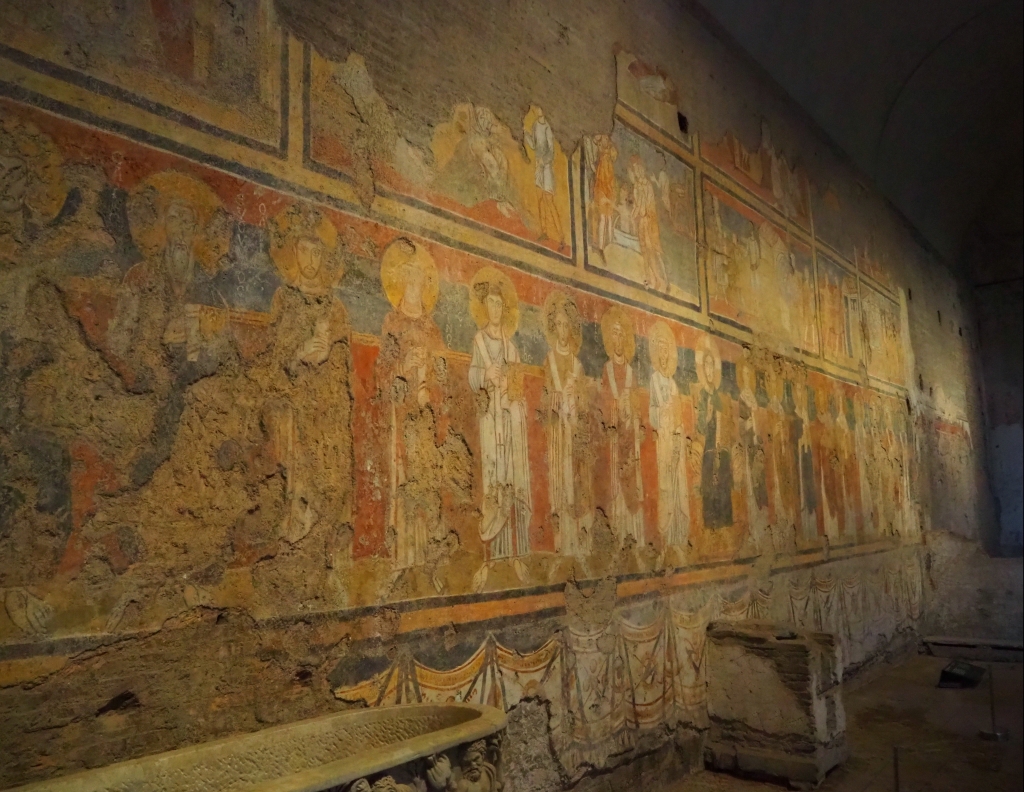 The Ticket also includes the Palatine Museum which presents to me a certain disappointment. It is obvious they had the idea of putting some new techmologies into use, plus a different artistic point of view to history but the concept is so artistic that it is completely unfathomable. Apart from this, everyone can find something impressive for him or her personally; I myself chose that torso of a tiger and the way they used to show the black lines on the body: 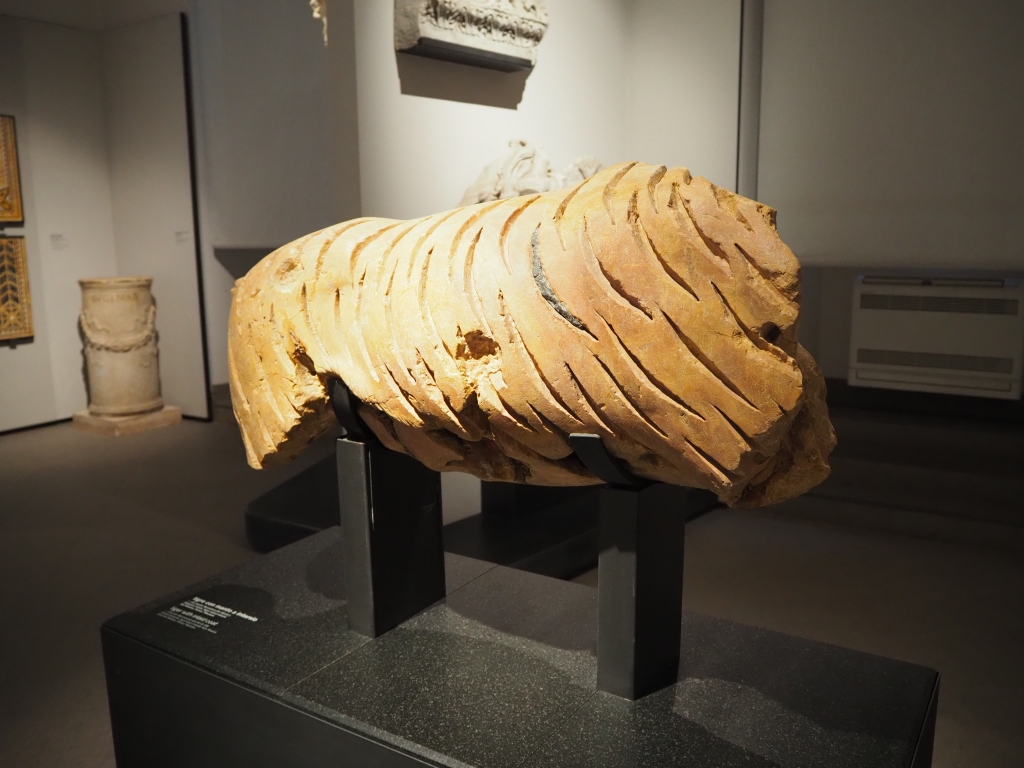 For the next day, we have the last two S.U.P.E.R. sites, the first also requiring preliminary booking and if only you miss your appointment, then you come to a new SUPER ticket. I speak of the House of Augustus/Octavian – the same first Roman Emperor and husband to yesterday’s Livia. Why they had separate Houses, we couldn’t find out; maybe that was some special Roman imperial recipe for a happy marriage… 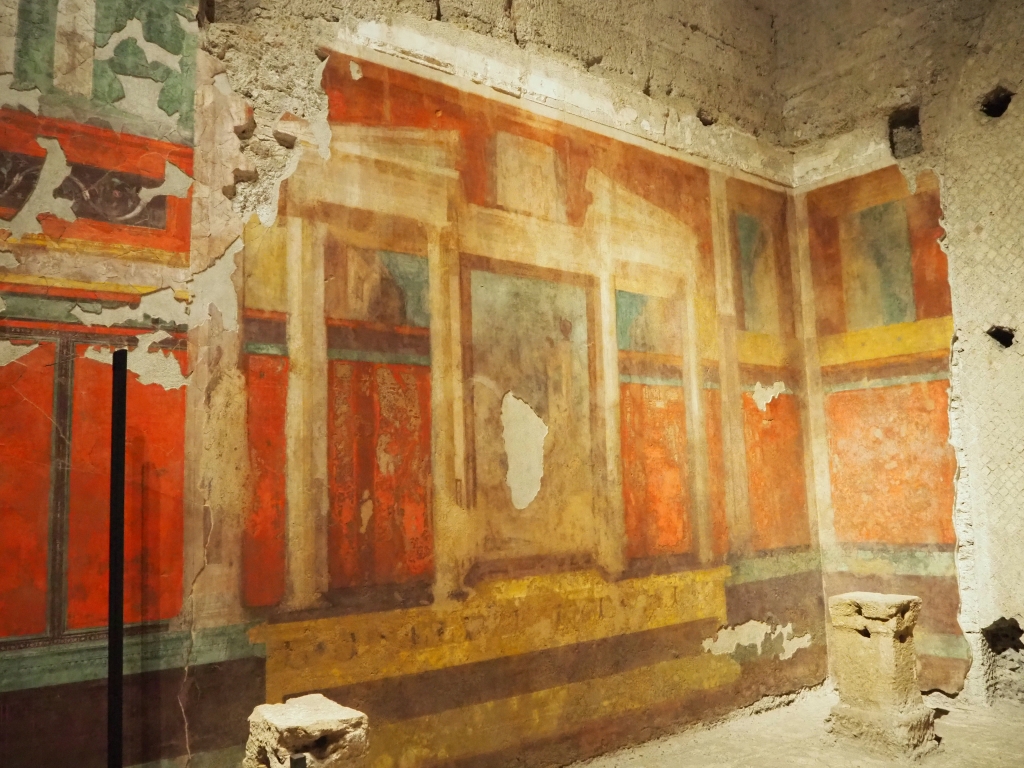 The last site is the so-called Aula Isiaca which turns to be the Hall of Isis – and it is called so as there is indeed a hall of Isis beneath, or a temple more precisely. As it is well-known, Romans felt no uneasiness to appropriate culture, sites and even dieties from the captured lands, in this case Egyptian. What is more interesting, however, is the ‘modest’ villa which some local Renaissance grands built right in top of Isis Hall, and especially the ceiling of the front room which rumour has it, was painted by no one else but Raphael himself. Here I leave you for today, with the ceiling in question – 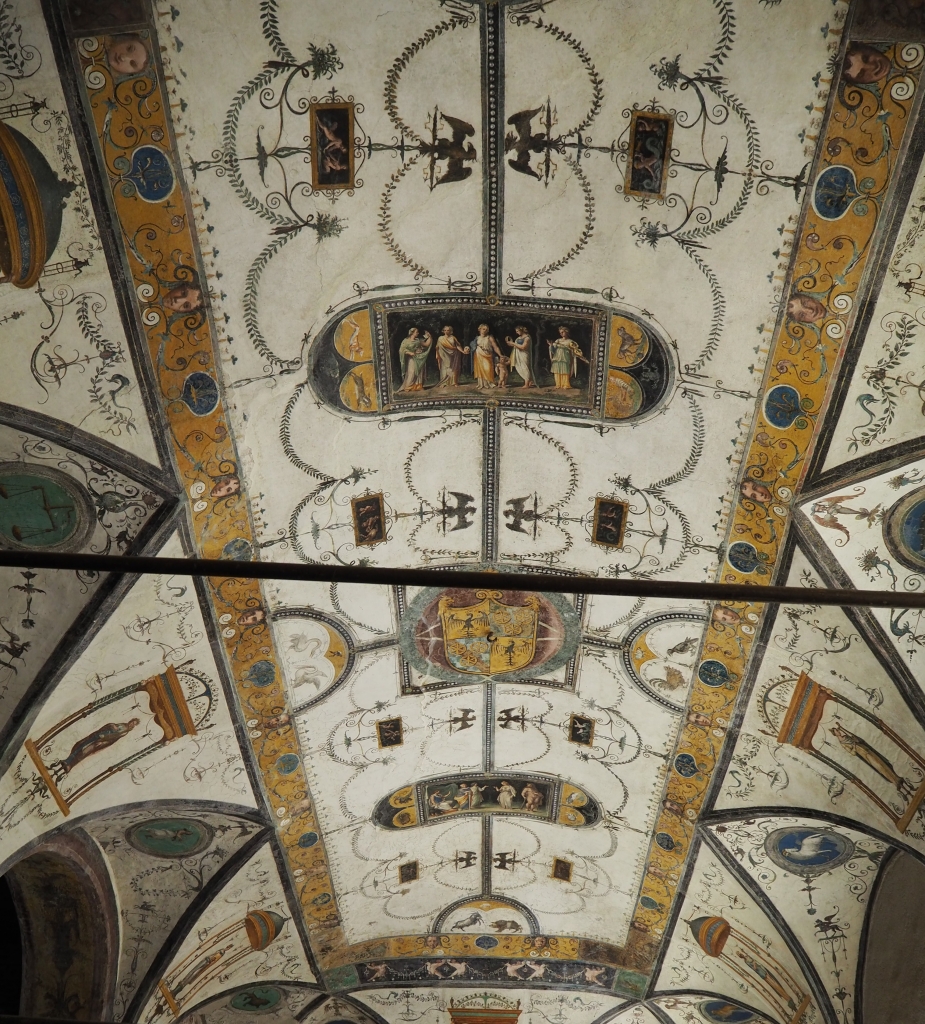 You may discover what else is there to see in the Roman Forum and other Rome secrets.