The Link Between Aphrodite and Paphos

Home/Europe/The Link Between Aphrodite and Paphos
Previous Next

The Link Between Aphrodite and Paphos

The first one, I don’t need to introduce to you – ancient Greek beauty, grace, love and so on. Paphos, on the other hand, is a city in Cyprus, the most southwestern point of the island. With a population of no more than 40,000 people, but so casually spread over the surrounding hills that from the outer districts to the center it takes 20 minutes by car (and 35 Euros if the car is a taxi!). It bears the name of another mythical person, the successor of Pygmalion, who sculpted a figure of Aphrodite so beautiful that he fell in love with her. You’re starting to see the connection now, I guess. 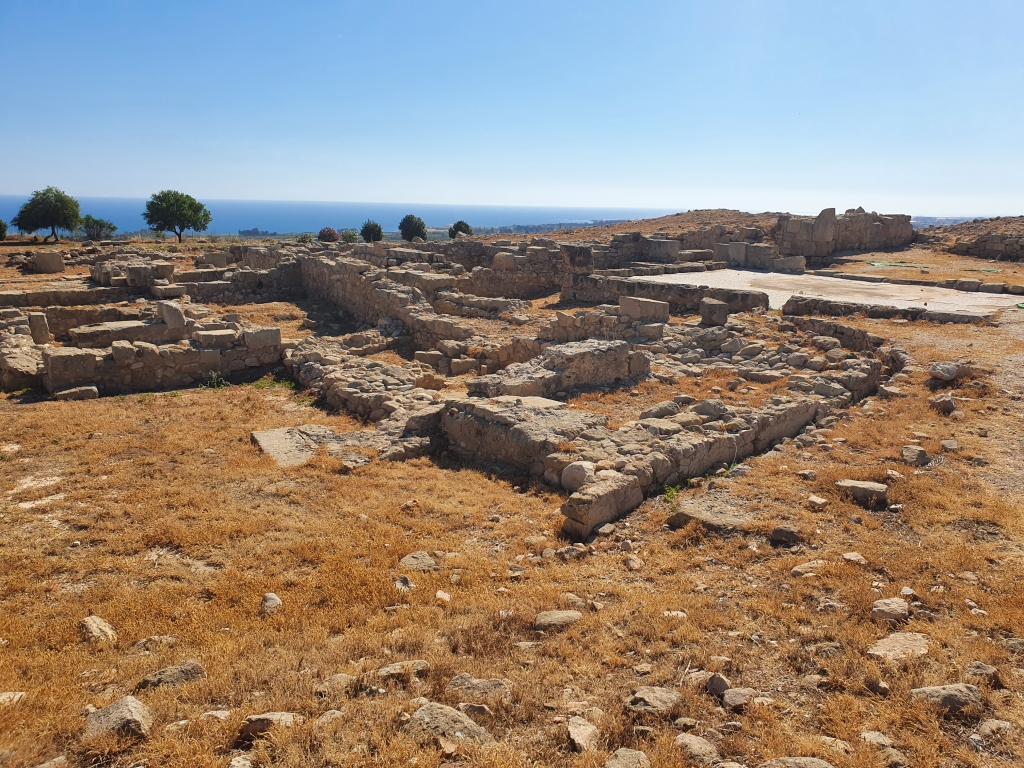 We will begin our short journey where historians say it all began. In Palaepaphos (Old Paphos, today the village of Kouklia), about 20 kilometers from the New one. Centuries before the new era, it was the pan-Hellenistic center of the cult of Aphrodite. That said, when an ancient Hellene felt like paying his or her respects to the goddess in the right place, Cyprus was the destination to buy a ticket to. Unfortunately, today almost nothing remains of the great cult center, most of it is hidden in the medieval mansion of the Lusignans. 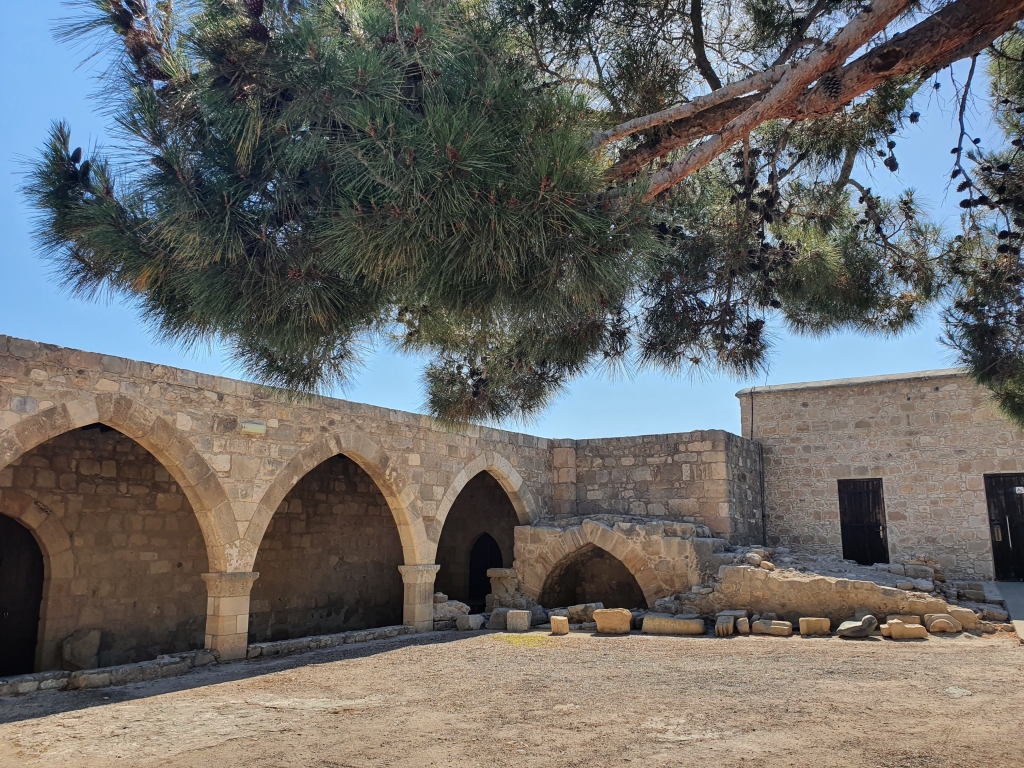 The name is probably familiar to you at least from the movie “Kingdom of Heaven”, where one such Lusignan became the reason for the taking of Jerusalem from the Crusaders. However, I had no idea that the entire island of Cyprus was in their possession for almost four centuries, from the beginning of the 12th to the end of the 15th. There is not much connection to Aphrodite here, except that their mansion in Kouklia is neatly located right in the cult center of the goddess and today the archaeological museum is huddled inside. You can find more interesting things inside than outside. Including a strange sarcophagus decorated with bearded naked men and their goats. 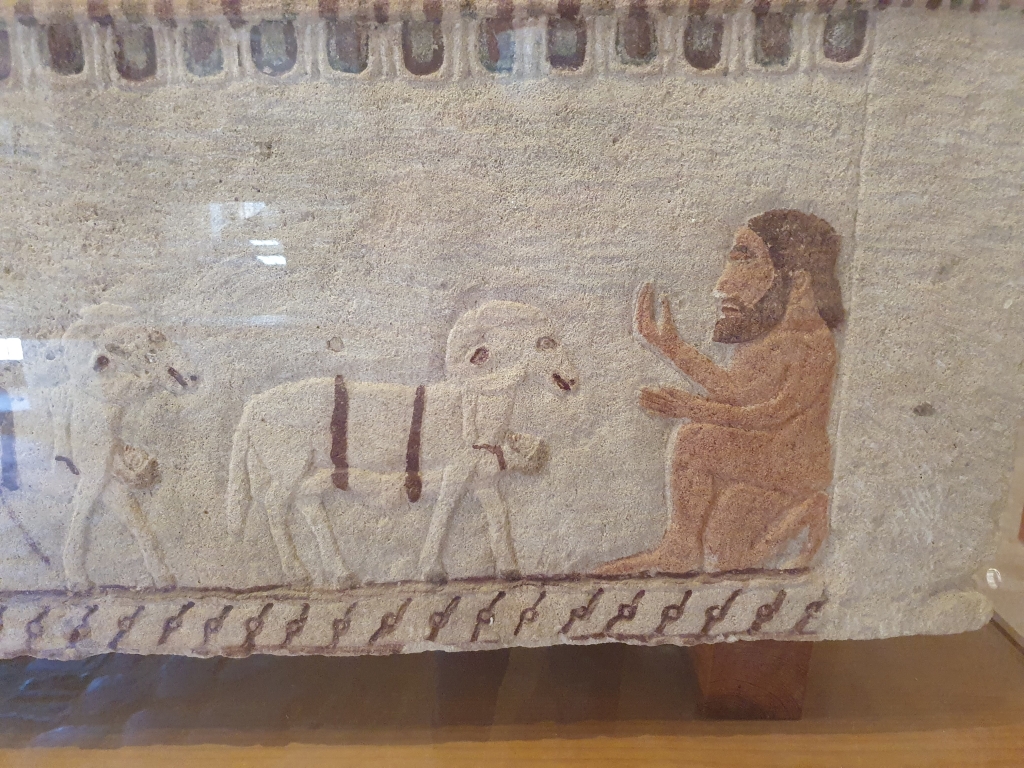 Time to head down to the sea and Nea Paphos. At the end of the 4th century BC the last king of Palaepaphos decided to move it to a more convenient place and laid the foundation of the modern city. Layers of history are all around it, peeking out from the gardens, lining the streets, opening up just below your feet with the Catacombs of Solomon. One part by the sea is fenced off and arranged like the Nea Paphos visitor site, with opening hours, tickets and everything necessary. We must definitely take a look. 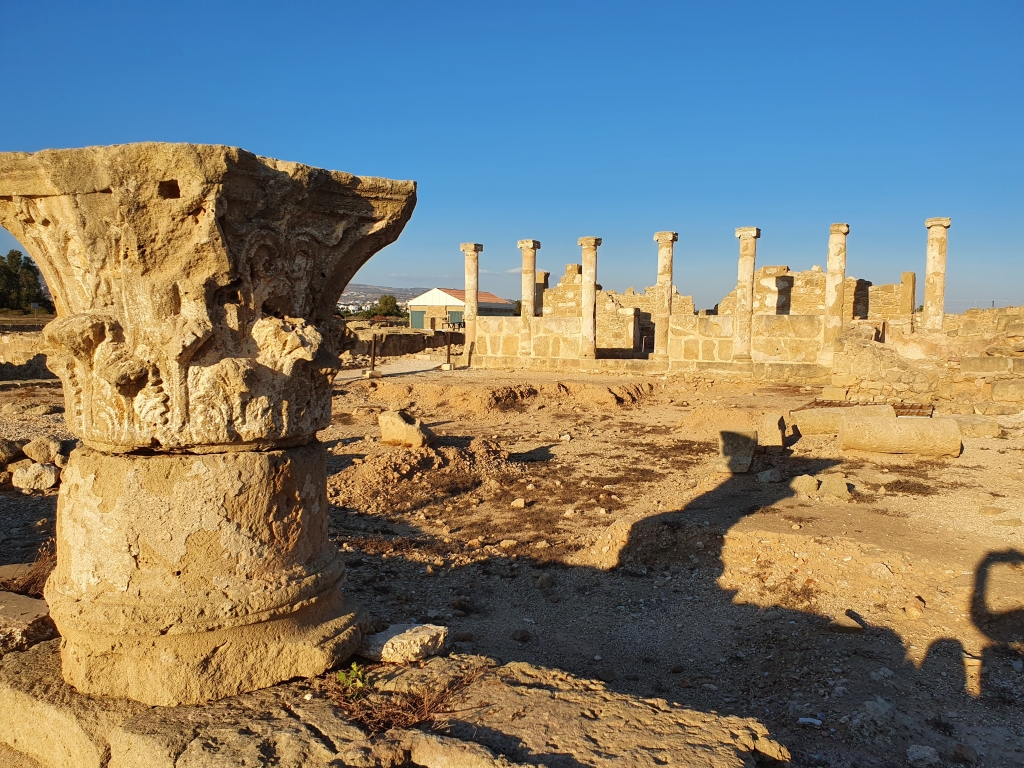 Several complexes have been excavated at the site, bearing names such as “House of Dionysus”, “House of Theseus”, etc. – after the names of gods and heroes depicted in the interior decoration. The exhibited historical layers already belong to the Roman era, 4th-5th century AD. You can enjoy the geometrically correct Roman town planning, water supply and drainage systems, underfloor heating, baths, latrines and everything as it should be. Of course, the greatest joy will probably come from the preserved mosaics. 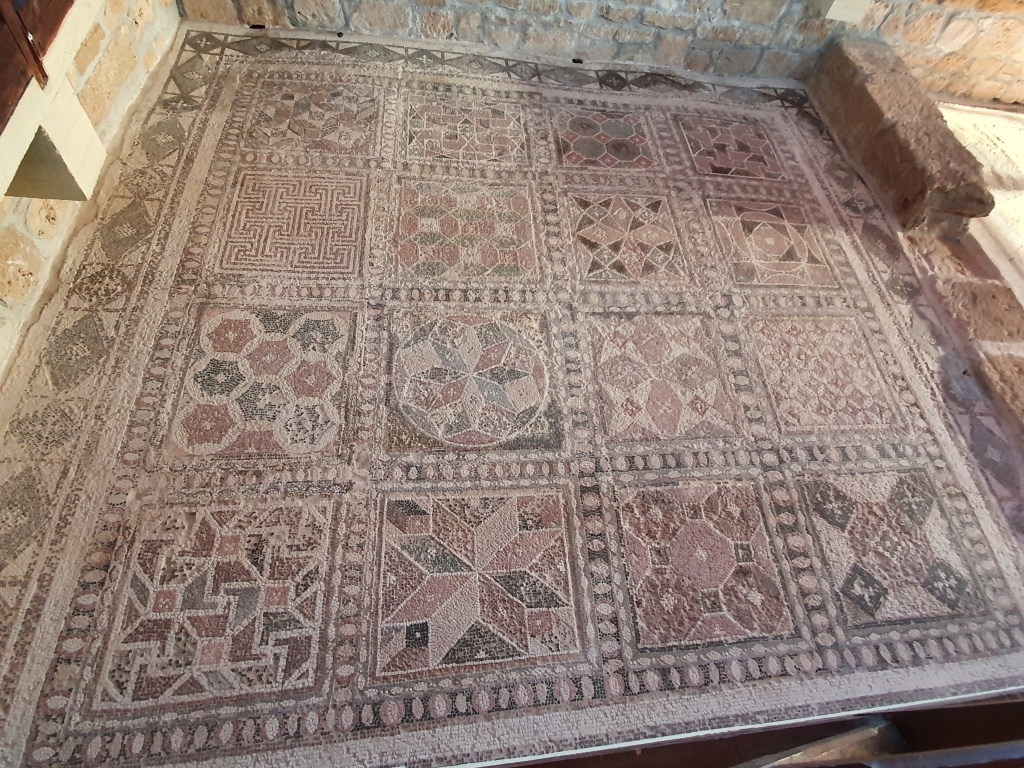 Some prefer mosaics with scenes from mythology, with human and animal figures. I personally really like the geometric mosaics, which I think require no less diligence and craftsmanship. There is enough of both types in the complex. Its territory also includes the Paphos Lighthouse, one of the local landmarks, built by the British during their brief “management” of the island after the collapse of the Ottoman Empire. Here you will also find the medieval Fortress of the Forty Columns, which I preferred to the Lighthouse. 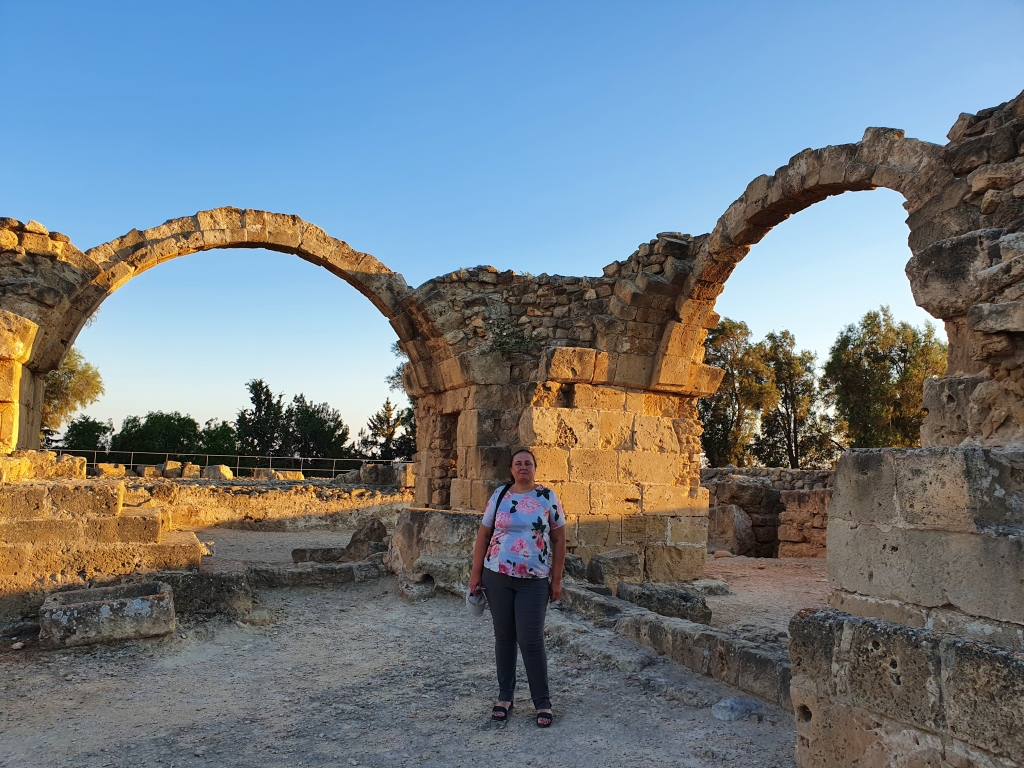 North of Nea Paphos along the seafront you will also find its necropolis. It is designated as a separate site to visit, bearing the name “Tombs of the Kings”. As far as scholars know, no king is buried inside. The name was given because of the monumentality of the constructions. Only a small part of the tombs are in almost complete shape, most have been severely affected by the centuries and the salty sea wind. Some are simple, just one room with burial niches, others have complex interior architecture and even resemble the houses of the Roman era, with a courtyard, peristyle and decorations. 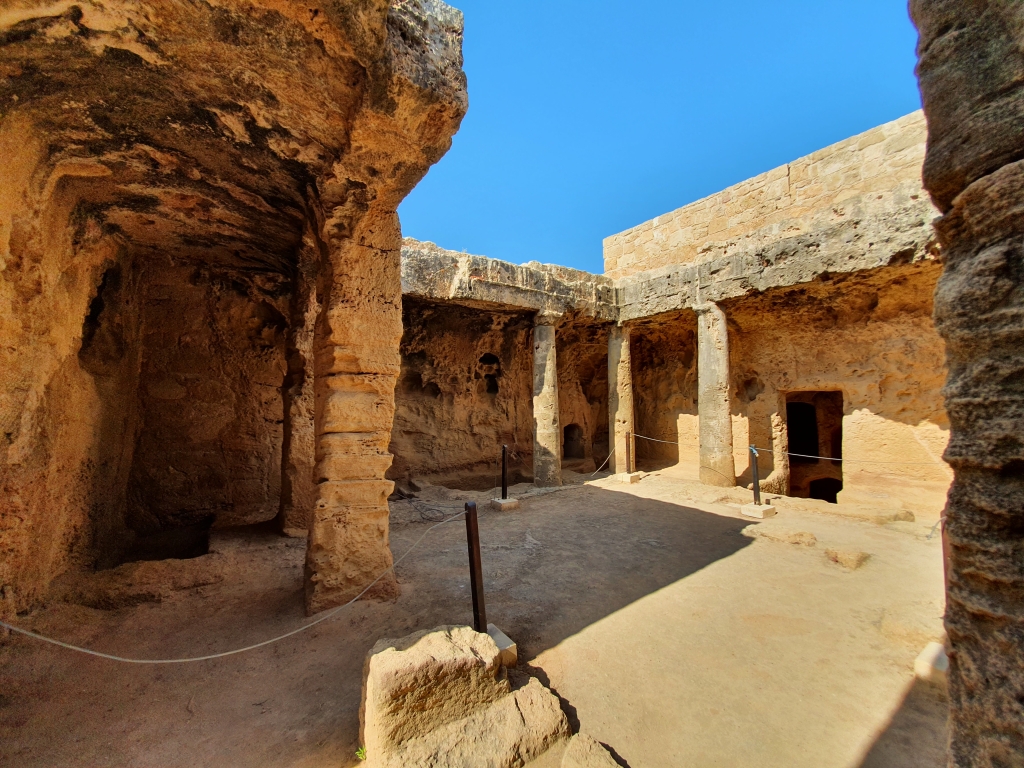 For the finale, we will go even further back in time. To the very myth of the birth of Aphrodite from the foam of the sea. The ancient Greeks were unanimous that it happened here on Cyprus, and the modern Cypriots are unanimous that it happened at the Rock of Aphrodite not far from Palaepaphos. The place is one of the ultimate selfie spots on the island, which makes taking the perfect selfie (devoid of other intruders) slightly challenging. But they say where there’s a will, there’s a way. 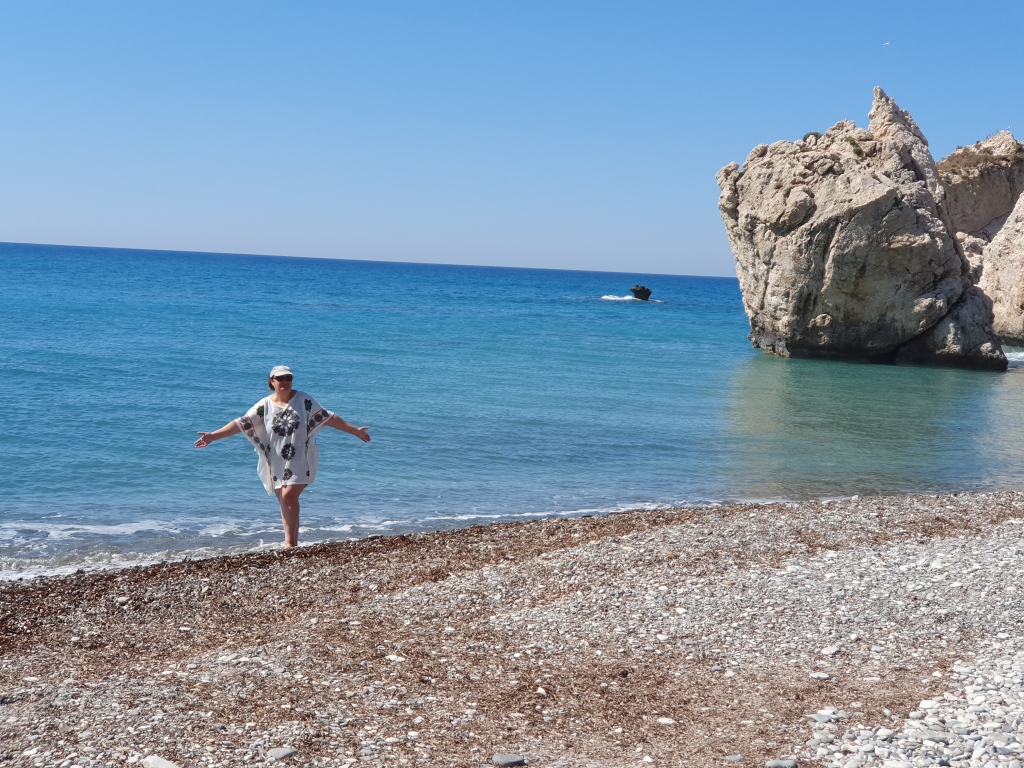 You can read about more of my island adventures here, here and here.