Five favorite places with ‘B’ around Bulgaria

Home/Ratings/Five favorite places with ‘B’ around Bulgaria
Previous Next

Five favorite places with ‘B’ around Bulgaria

By this extremely accurate geographical term, ‘around Bulgaria’, I name my beautiful homeland minus its southwest corner. The reason for that is I already spoke about my favorite places with ‘B’ in Southwest Bulgaria. I have not included here my favorite destination for pioneers’ sea camps from my socialist childhood which is the small town of Balchik, since I found out I have only paper photos from it. I haven’t also included the towns of Byala, Bourgas and other places which would probably become my favorites if I ever pay them a little more time than just passing by. So, here we start with the places to visit with ‘B’ around Bulgaria, from its northwest corner.

They say it is the best preserved medieval fortress in Bulgaria. A National Monument of Culutre, one of the 100 National Tourist Sites, a scene for many festivals, decor for films and shows… In two words, there are many pieces of proof for its significance. To me, it is rather a romantic place. Which probably sounds odd having in mind that it was a prison at a certian point and they have even preserved the gallows in one of the corners (I don’t recall this, by the way, I probably have erased it automatically from my memory). But we, Bulgarian girls, do not have so many options/places where we can see ourselves as princesses or characters of knight novels. I do not recommend to visit the fortress in mid-day during summer; and if it happens anyway, carry hats and water and pay more attention to the cool tunnels and the rooms within towers. The Danube River is nearby, as it can be expected from a keep built on top of an ancient Roman fortress, but in the heat, the river helps only by providing a nice view. 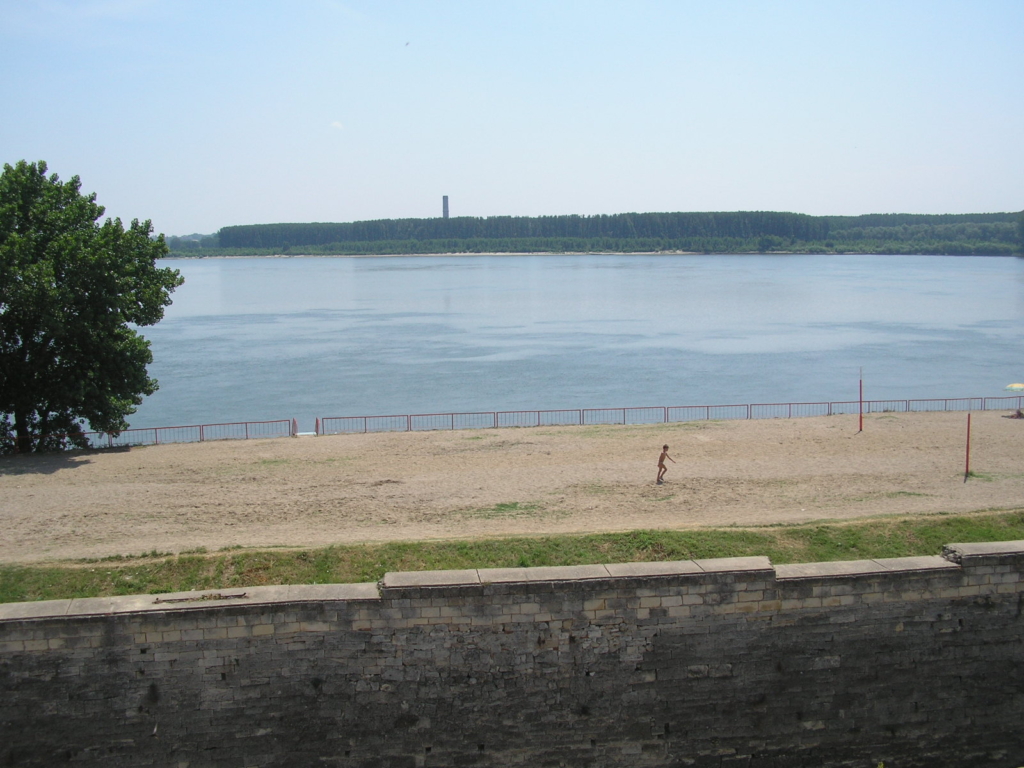 We move to the northeastern parts of the country, towards the valleys of several rivers bearing the name of Lom and united under the common name Polomie. This is the territory of Rusenski Lom Nature Park and several very interesting sites located around it. One of these sites is the monastery of St. Dimitar Basarbovski, one part of which has been cut into the rocks in a very attractive way. There is, in general, something in the rock monasteries that charms people; it is the same in the nearby Ivanovo Rock Churches, the little more distant Aladja Monstery near Varna, and even the quite distant Meteora Monasteries in Greece. The patron of the monastery is one of the monks who lived and worked here in the 17th century; the establishment itself dates from 3-4 centuries earlier. The worn steps in the rocks remind of the many feet passing up- and downwards through the centuries. To me personally, most attractive is the very landscape of Polomie, where you can see some truly wonderous shapes, like such: 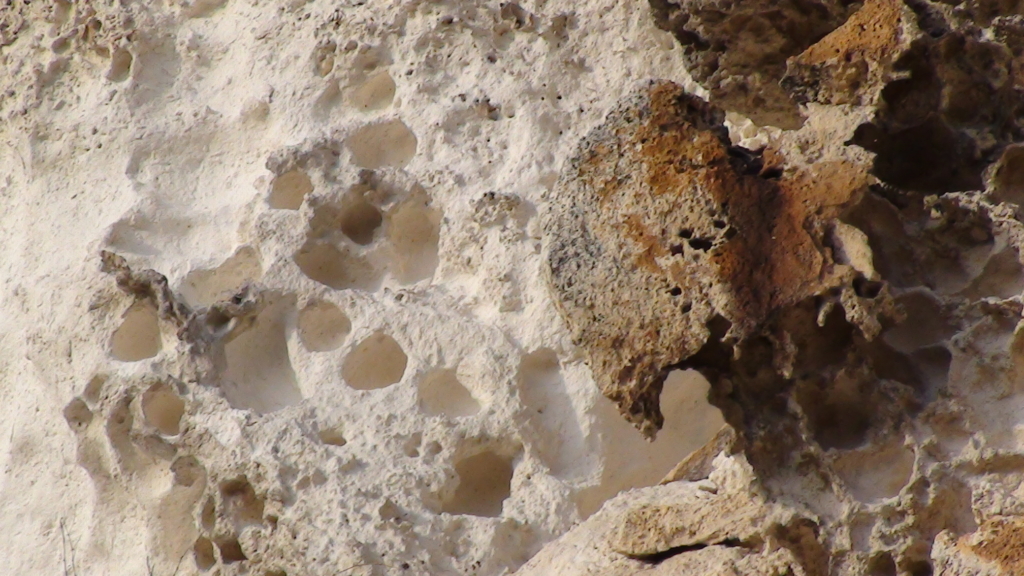 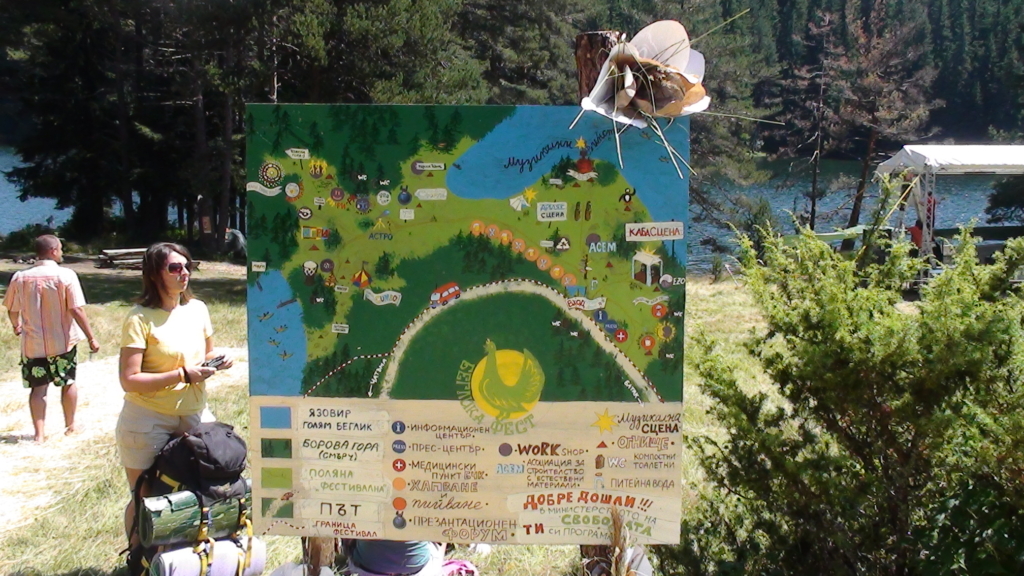 Speaking about places to visit with ‘B’ around Bulgaria, we descend southwards, towards the Rhodoppe Mountains. They have here a Belgika Plateu, a Beglika watershed, the nature reserve of Beglika, Golyam (Big) Beglik Dam and its smaller ‘brother’ of Beglika Dam. I am myself speaking of Beglika Fest, which is being organized on the banks of the above-mentioned Golyam Beglik Dam since 2008. Visiting the event requires a great portion of enthusiasm, especially for comfort-lovers like me, as it takes a lot of walking just to reach the venue form the car parking lots, dragging all your luggage for three days on your back; and you have to be really cold-proof if you decide to sleep in a tent by the dam. The traditional evening concerts help a lot since they are accompanied by certain beverages with high-alcohol percentage. The fest is good fun and offers a lot to do: rope attractions, boats on the dam, yoga- and martial arts lessons, healthy cooking, clay pot drawing, drum beating and many others. I myself have remembered this fellow on the photo below (not my beloved, the one behind him) who was preparing ‘bio’-lemonade without ever taking the cigarette out of his mouth and succeeded, to my greatest surprise, to do this without dropping a single piece of ash into the cups. 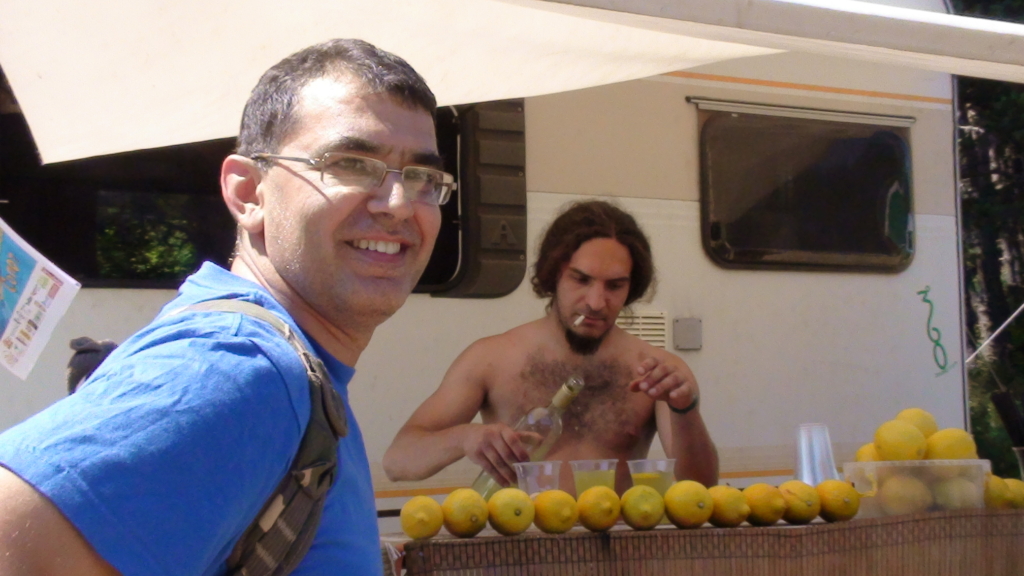 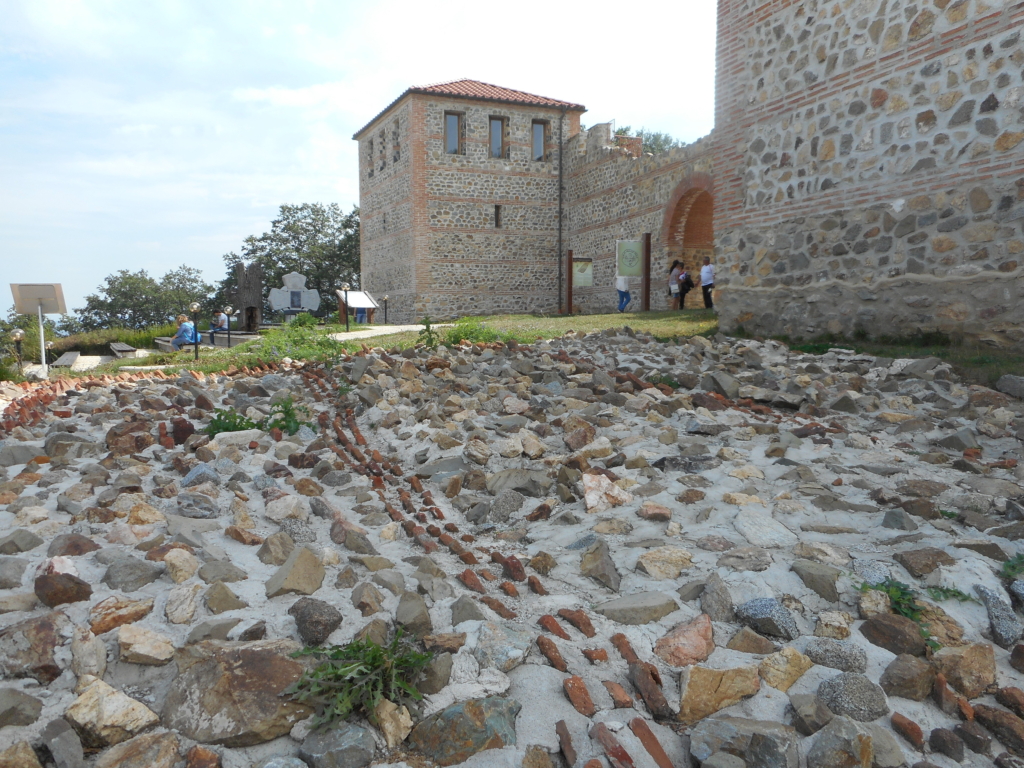 Until not very long ago, the village fo Belchin was not so famous, unlike its neighbouring resort of Belchin Baths where they have mineral springs, SPA and this sort of things. Since 2013, however, the place has achieved a small tourist boom by restoring the fortress of Tsari Mali Grad (translated as Small Royal Town). Located on a hill quite high above the contemporary village, it dates from Roman times although there are traces of much earlier dwellings as well. The restoration was the idea of local activists and was equally inspired by patriotic and economic factors – which is, of course, an excellent combination. The attraction starts from the very parking lot below, from where a small funicular goes up the hill. Unfortunately, it doesn’t always work for some reason, so the alternative is climbing up the parallel forest tracks. The prize at the top includes some fortress walls, towers and a church, as well as some entertainment installations such as a hanging rope trail and children’s playgrounds. And the towers usually host various exhibitions like the one we saw upon our visit, dedicated to bread (see the photo at the beginning, this is a rooster made of bread!) 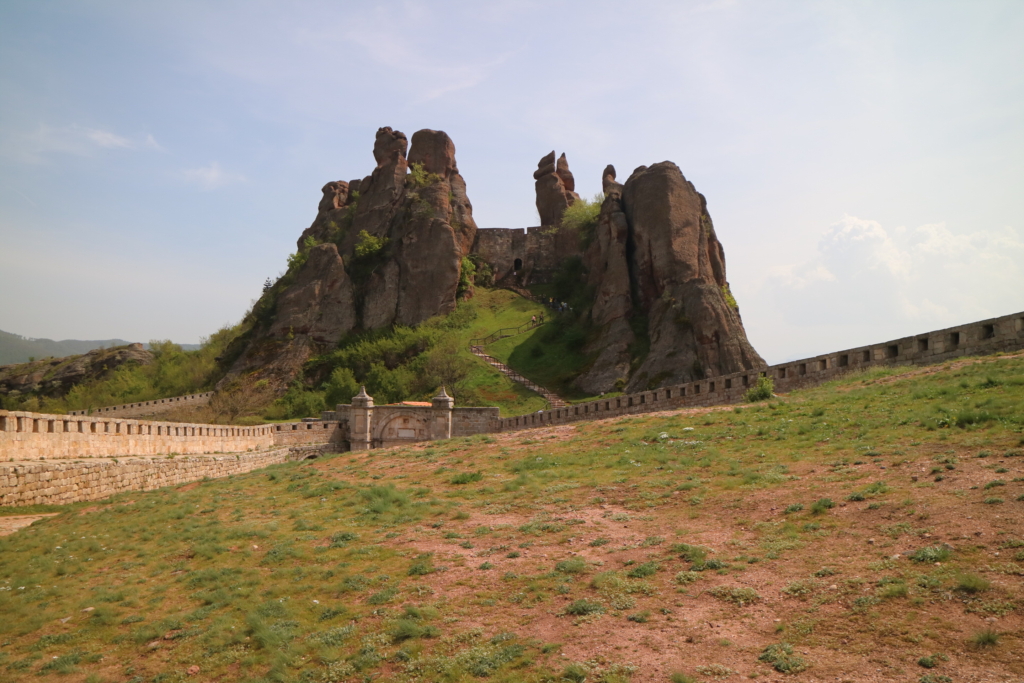 The last of today’s places to visit with ‘B’ around Bulgaria is well-known. It is located in the northwestern part of the country, which means that we made a sort of a circle around it. The very location is magical, with the mysterious rocks springing from everywhere and the amazing views. The Belogradchik Fortress is a total bonus, blending with these rocks in a natural way. Just like Baba Vida, it was first built in Roman times; it is also among the better preserved Bulgarian fortresses; another National Monument of Culture and one of the 100 National Tourist Sites. I once again recommend that your visit avoids the hottest periods of the day/year and that you wear comfortable shoes. There is also absolutely no point to go if you’ve lost the battery of your phone – you’ll simply die of frustration that you’ll be unable to photograph the whole magnificence – 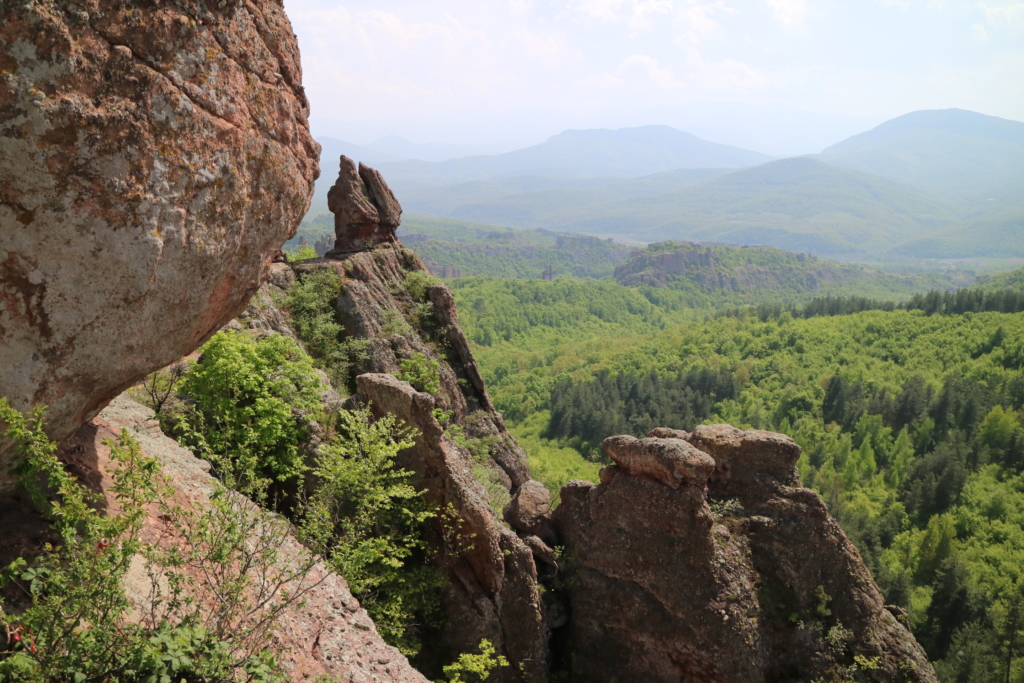