What I discovered in Thessaloniki

Home/What I discovered in Thessaloniki
Previous Next

What I discovered in Thessaloniki

I had personally visited Thessaloniki at least ten times, not counting the many times I had run to its airport which frequently offers far better prices than the Sofia one. I had been met by local residents and walked around by friends and colleagues claiming to know the city well. I thought, there is nothing more this place can surprise me by. Well, there was still what to see in Thessaloniki. To start with, it turned out that the famous White Tower at the sea-side alley is not the only fortress sample; there are many others scattered at all sorts of spots around the town. Including a whole another tower, rotund and huge (on the photo above) which is regrettably closed for visits but offers a wonderful view of the whole city and the port. Parts of thick walls, gates and buildings appear at unexpected places, and if you follow the signs to “Eptapyrgion”, you will find a rather large fortress section with a later prison inserted right into it. At present, the site doesn’t work properly and you can only enter a very limited section due to the lack of staff, as we were told by a otherwise smiling and polite local guide. 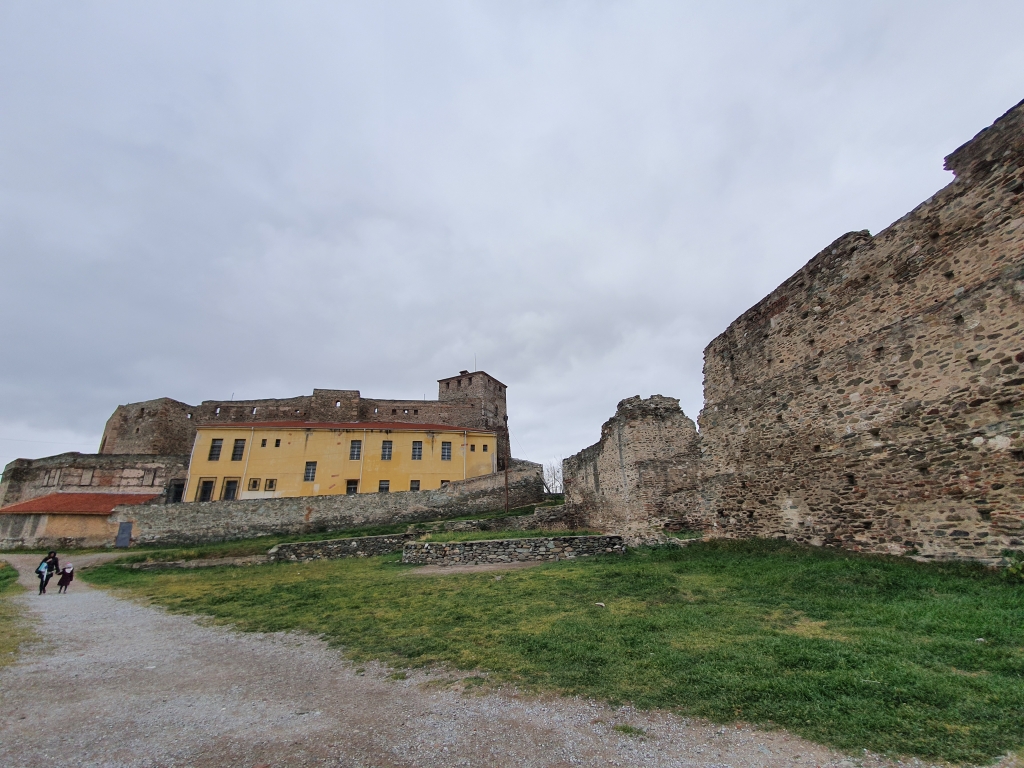 From the fortress, you can go directly down the hill and find the impressive church of Agiou Dimitriou dedicated to patron-saint of Thessaloniki. Its architecture is very interesting and non-typical from both the outside and inside. It was built on the spot of an old Roman bath and was destroyed and restored several times. Unfortunately, we were not able to enter the crypt, that is, the place of martyrdom of St. Dimitrios, as it turned out to be closed at 3 PM like many other sites in winter. 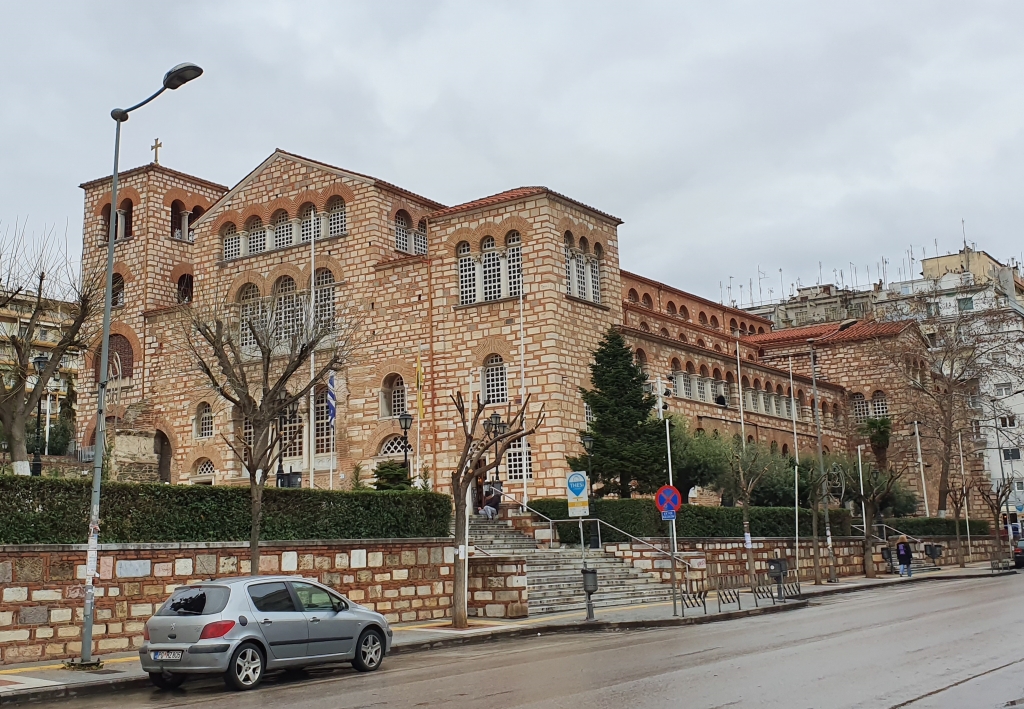 A great surprise by all standards was the so-called Thessaloniki Rotunda, or the Greek version of the Roman Pantheon. A round building made of stone, rather large, located in a cut to the main artery of the town, Egnatia Street. In two words, in front of everyone’s eyes. But it is not even mentioned on Trip Advisor, and it is so surrounded by the nice Greek white blocks of flats with wide terraces and sun-screens, that you only see it when you are right in front of it. Mind it, there was a minaret added at some point which you would think would help visibility… The entry costs only 3 EUR and the visitors are not so much. It was us and three French grannies. 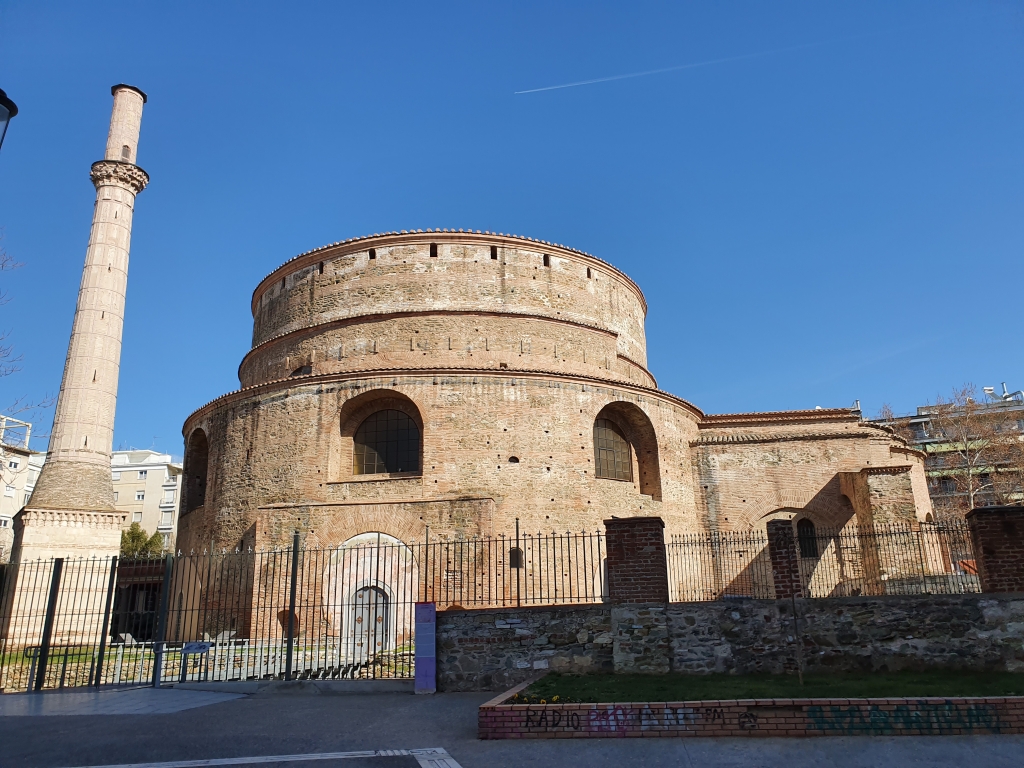 I recommend that you first take a walk outside, around the Rotunda. By the minaret, there is a nice multi-spout fountain, now not working, which I assume was once used by the Muslim worshippers for the traditional cleaning before prayers. On one side, there are excavations of earlier cultural layers, connected or not to the temple itself. And at the back, you can see how they had to strengthen the building at some point by additional walls, although I couldn’t fathom why those had to have arches in them. Here they are on the photo below, together with other interesting historical remains which are either the biggest flower-pot I have ever seen, or the sarcophagus of someone 3-meters tall, or a curious water basin (sink tub? part of a fountain?) – but why there should be columns inside, remains a mystery to me. 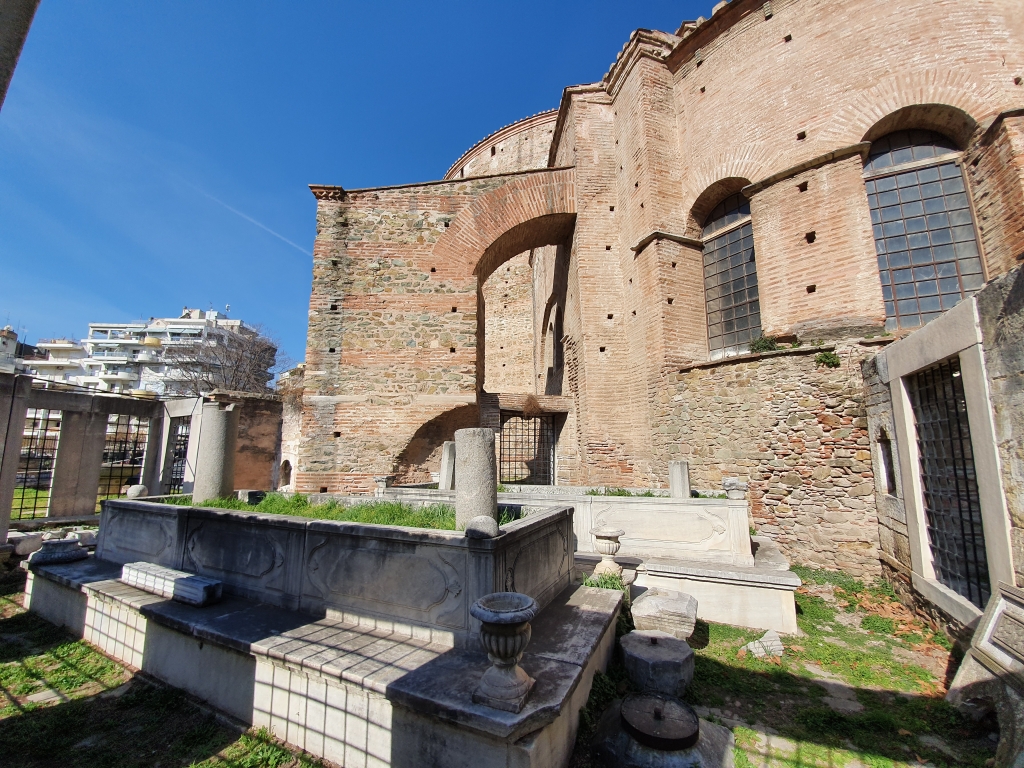 After the outer walk, do enter the Rotunda. The similarities with the Roman Pantheon continue. The round shape has large niches in it which obviously contained statues of the gods when there was still poly-theism ruling. As in Rome, later the temple became mono-theistic turning into a Christian church and, judging by the minaret outside, there was an Islamic period too. Again as in Rome, the top of the cupola once obviously has an ‘oculus’ or a round hole which is now filled in but you can see the typical shaft for rainwater right underneath it. The internal decoration, however, which is only partially preserved to my greatest regret, is quite different from the Roman Pantheon. These are typical Byzantine mosaics, in the typical golden, honey-like, blue and green colours. 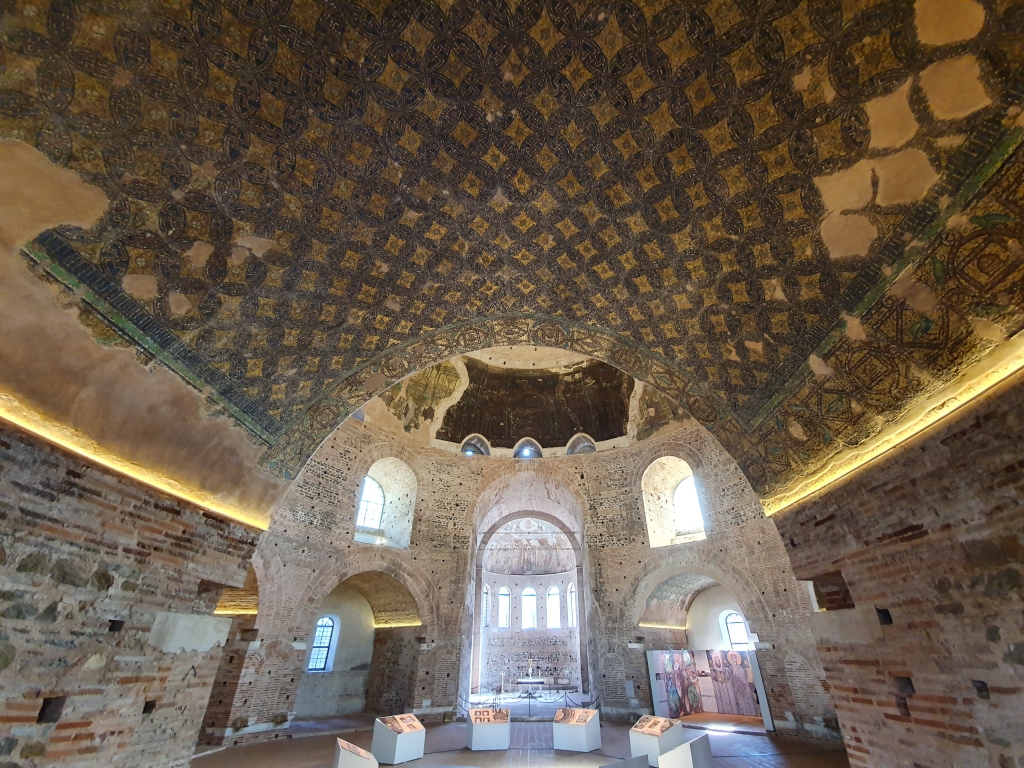 Then follows the Archaeological Museum of Thessaloniki which, unlike the Rotunda, I had visited several times before, but they always find something new to surprise me by. I need to warn you though – if your legs are already killing you due to the poor choice of shoes and you are hoping to give them a break by walking on the smooth marble floors in your socks, you will be bitterly disappointed. Immediately there appears one of the pleasant smiling young ladies and explains with an apologetic smile that this is not allowed and please put your shoes back on. Alas! But, despite the hurting feet, to me this museum is a must every time. There are Olympic medals and golden laurel wreaths; jewelry products of exquisite mastery; golden perfume flasks in various shapes and colours including the shape of birds; funerary urns of clay and bronze, some ordinary, others with sophisticated decorations; the oldest discovered Hellenic papyrus, included in UNESCO lists as the first Greek book, and many others. 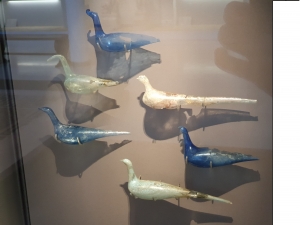 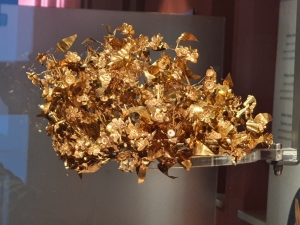 And when you really don’t feel your feet any more and you have checked everything on your “What to see in Thessaloniki” list, I suggest you pick a nice coffee shop by the sea or at Egnatia, possibly with a Greek pie in front of you – so sweet it makes your teeth shudder, and have a white frappe or a Cappuccino. Of course, you can also take any of the comfortable benches at the seaside alley and spend some time just looking at the sea, the sun, the ships and the never-stopping human-and-dog flow. I personally chose a café offering to me a view of Galerius’ Arch. Another of my amazing Thessaloniki discoveries. A Triumph Arch built in 298 to commemorate the victory of Emperor Galerius over some Sassanid Kingdom. And going like this for 17 more centuries… 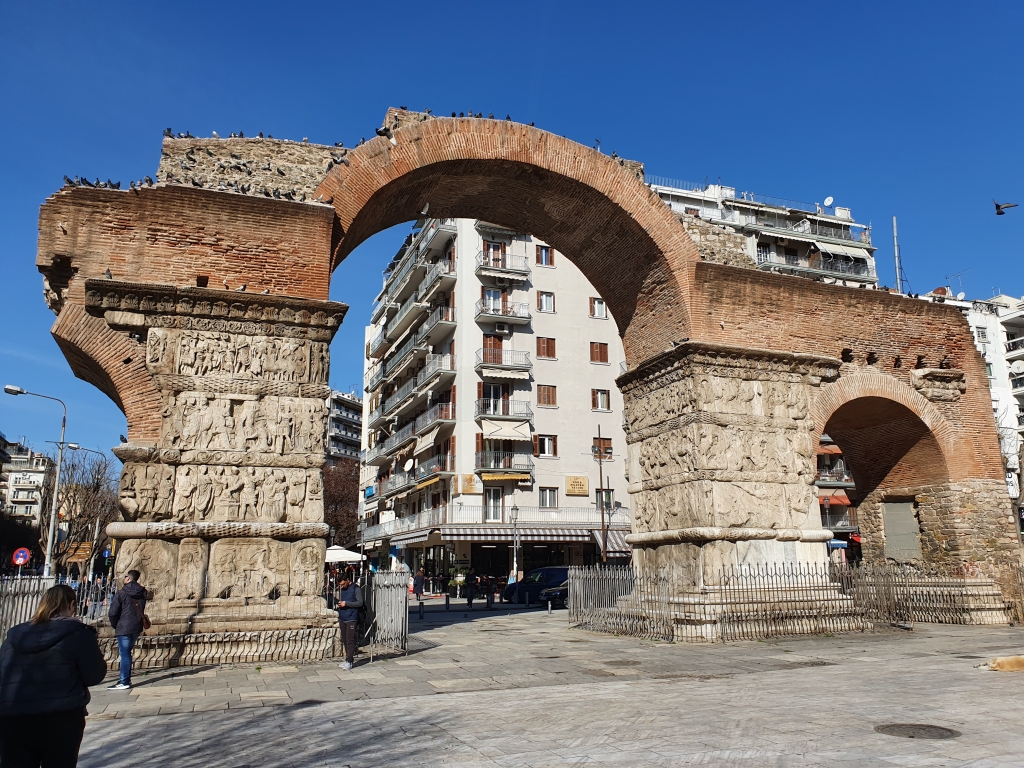 My suggestions of what to see in Thessaloniki are far from covering everything in this beautiful city. You need to explore for yourselves. And in the meantime, if you are into museums and into Greece, you may check my post about Chania museums.