Home/Fiesta over fiesta
Previous Next

My grandpa used to say that the option beating over beating was not good but meal over meal was quite OK. I would add, a celebration over celebration too! A week ago, we ate some chestnuts at the foothills of Belasitsa Mountain; this weekend we didn’t hesitate to do the same in the nearby village of Brezhani. They held the 10th annual Festival of Brezhani Chestnuts there. Local people were unanimous about being the owners of the one and only best chestnut, much bigger and more delicious than the one in Belasitsa. Well, I have no intention to enter this argument; I leave it to the personal preferences of everyone. 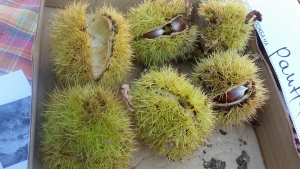 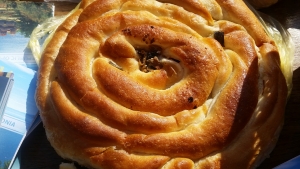 Of course, they were offering not only chestnuts but other delicacies as well. Do you see, for example, that beautiful pastry with leeks and cheese? Well, you can’t see it anymore; I ate it all without a second thought! In line with the new-Bulgarian tradition, the Festival of Brezhani Chestnuts was decorated with an open stage where folklore performers from all over the region took turns to the combined joy of the local people and the guests: 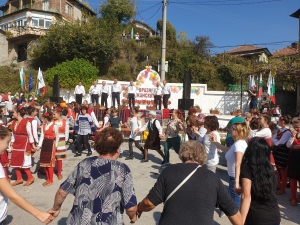 Probably this is the moment for me to confess that I am in possession of a special type of greed. I always want more and more – to go someplace, to see, to touch, to participate, to grab a bite… So, there it is the 19th October, the Saturday when I was invited not to one but to two celebrations – in Brezhani and Gotse Delchev. How could I possibly miss any? Filled with chestnuts and pastry and having made several turns of traditional Horo dance on the square in Brezhani, we jumped in the car and rushed southwards along the Mesta River Valley. This is always easier said than done since the road in the valley is narrow and there is usually some nice grandpa in an old Opel or soviet Zhiguli, clinging to the wheel with 60 km/h as if for dear life. I don’t know, maybe we’ll all get like this if we ever reach the grandpa age… 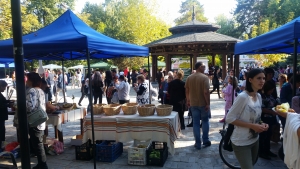 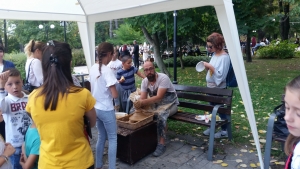 In the city park of Gotse Delchev, when we finally got there, we joined the Celebration of Local Initiative whose idea was to remind of the old traditional Autumn Nevrokop Fair. Producers of food, drinks and all other sorts of local products from Gotse Delchev, Hadzhidimovo and Garmen had opened their stands in the still green park, demonstrating the abundance of this southern Bulgarian region. There was even a queue for the opportunity to roll a clay vase or whatever you can on the potter’s wheel. To me personally, probably because I was already full of food and my eyes were not bigger than the stomach anymore, of great interest appeared the young guests from Serbia and Romania who danced on the open stage with the whole heartiness they were capable of. Well, that’s from me for now; since it was a double holiday, I give you two photos of everything – 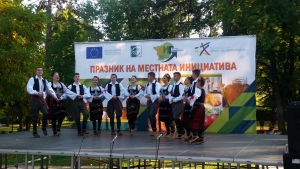 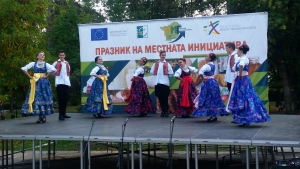