At the Vidin Museum

At the Vidin Museum

It is not one, but several museums. That is why one should take not one, but several hours. At least. I believe that many people have heard of, if not seen, the fortress of Baba Vida. However, they may have missed the other sites of the Vidin museum. I, for example, had. And they are not to be missed. Let me introduce you to Konaka first. Quite a real Konak, from the 18th century – an Ottoman administrative and police center. And an extremely attractive building located at the very end of the pedestrian center of modern Vidin town. Its only drawback, according to museum workers, is the effect of chanelling and speeding up the airflow through the tunnel in the center – and only in winter. 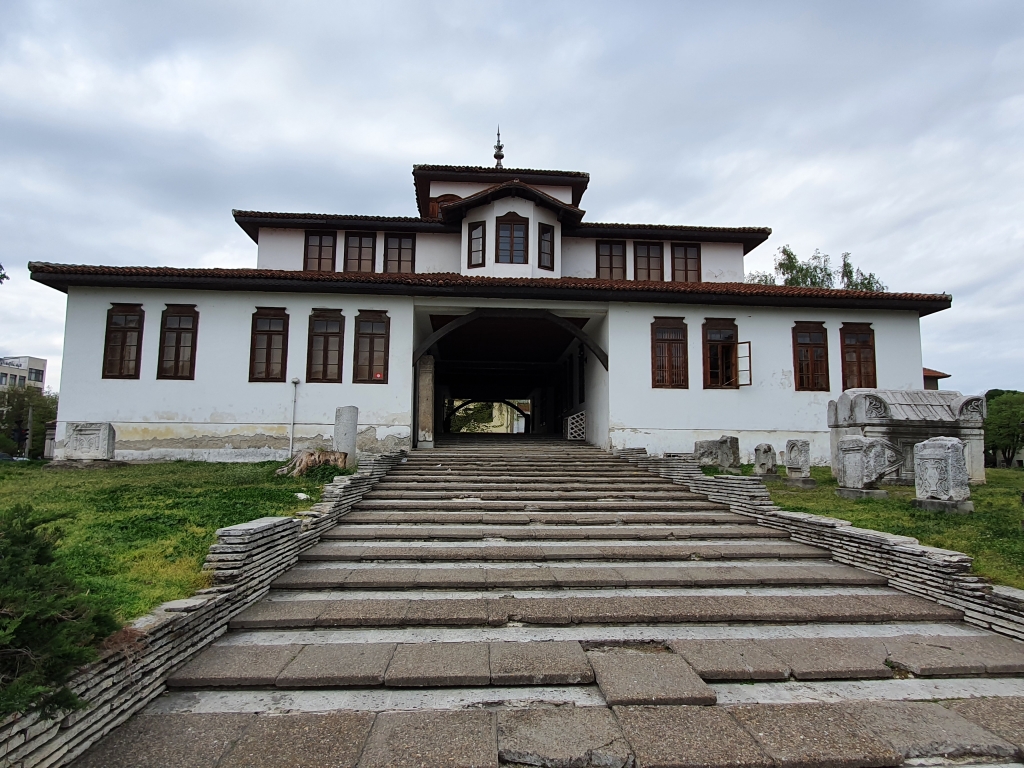 The Konak houses the archeological expositions of the museum. It goes without saying that there are innumerable riches inside. And I’m not talking about gold and precious stones, but about all kinds of treasures that carry a piece of the history of our lands. For example, when you say “prehistory”, what is it that usualy comes to mind? That’s right, primitive smelly people with naturally formed dirt dreadlocks that keep knocking two stones together in the faint hope of making fire. Or something like that. I will not dispute the scentic characteristics of the ancestors. Look at this, though – 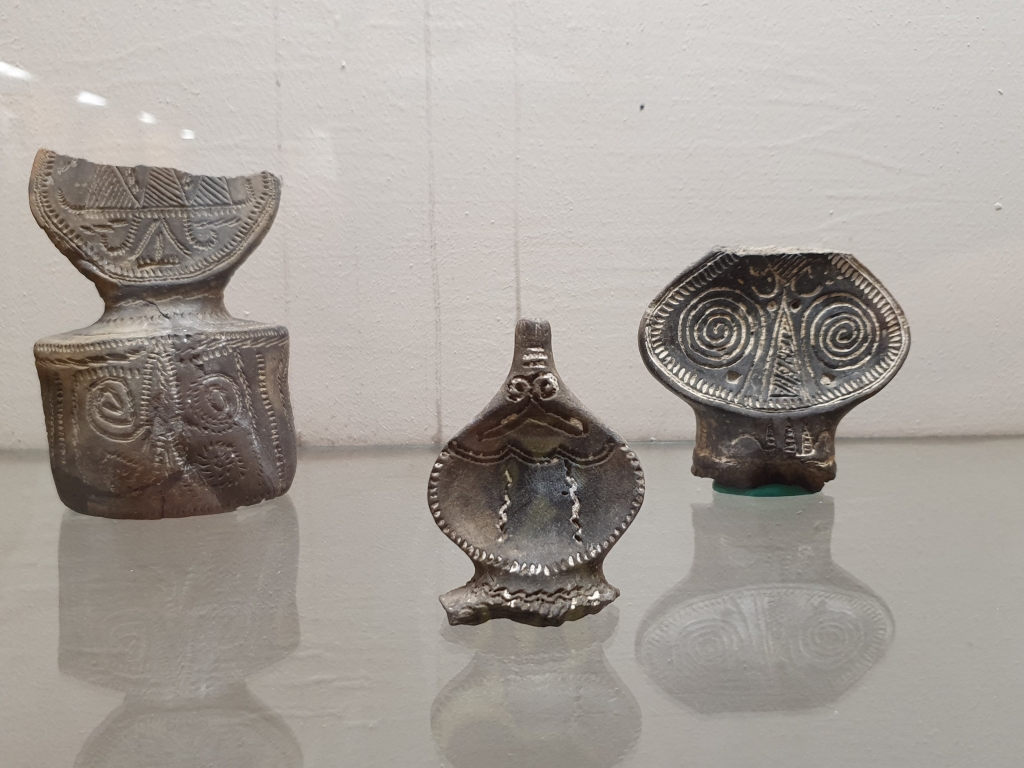 That’s just one of the treasures excavated from prehistoric times and kept at the Vidin museum. Can you imagine the diligence of the prehistoric man who made this pottery absolutely by hand, without a potter’s wheel? His or her desire to achieve beauty with the limited means available to them? Finally, the time they spent to produce these things, given that 30 years was then a long life? Well, we have to admit that the museum is full of more traditional treasures as well: 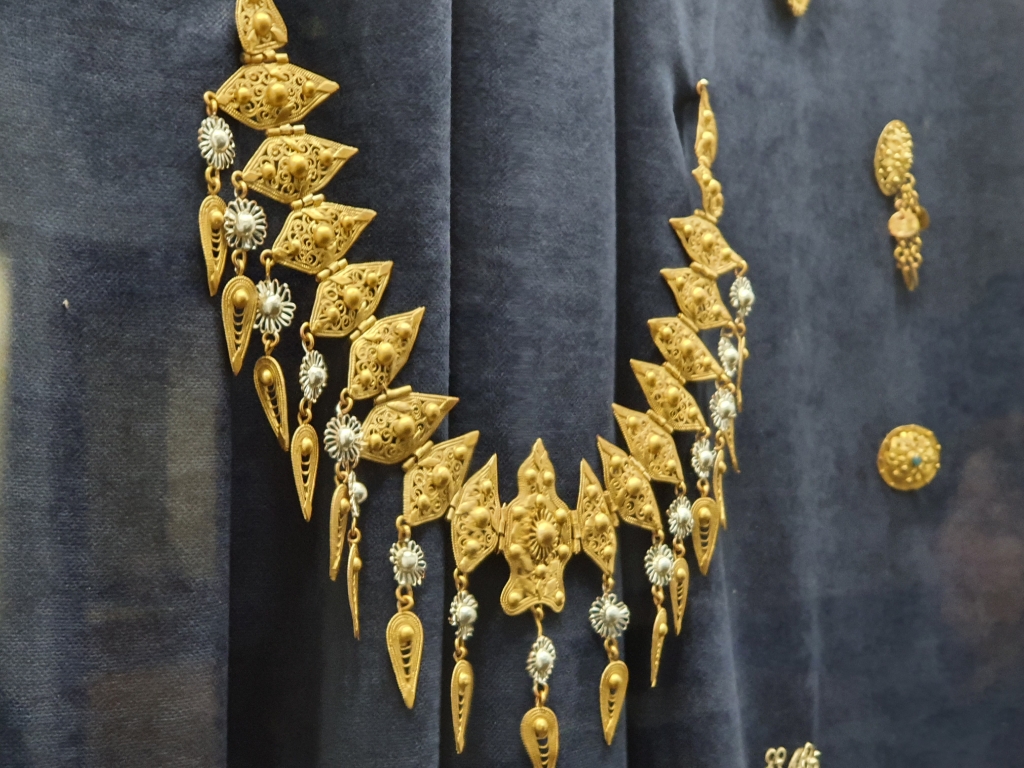 The medieval works are located on the second floor of Konaka. It should be noted that the interior of the building is just as attractive as the exterior. It was difficult for me to connect this interior with a public building, even more so one dedicated to the establishment and maintenance of public order. I think the mezzanine terrace under the highest part of the roof was added later, but we’re still so far from the cement staircase with the iron railing pipe, if you know what I mean. Honestly, who makes a police station look like this – 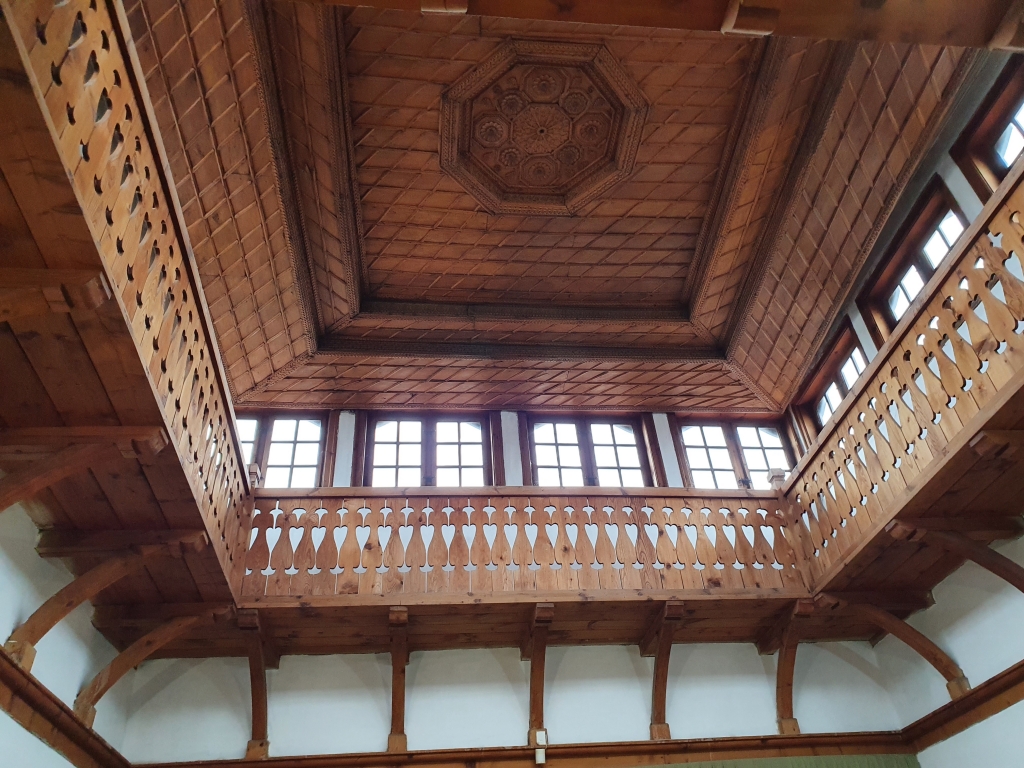 Our next destination of the Vidin museum, is the so-called Krastata Kazarma – the Cross-Shaped Barracks. Barracks – because it was like that in Ottoman times, and the Cross – because, believe it or not, it really has the shape of a cross. Why such a form actually exists, no one knows today. It was built by the local ruler Osman Pazvantoglu, whom the people of Vidin mention and quote matter-of-factly, almost by default. As in: “Have you already been to Pazvantoglu’s grave?” It’s like “Have you already been to the tomb of Suleiman the Magnificent” – as if everyone should know the local nobleman. I personally had never heard of him, I “met” him through his barracks. 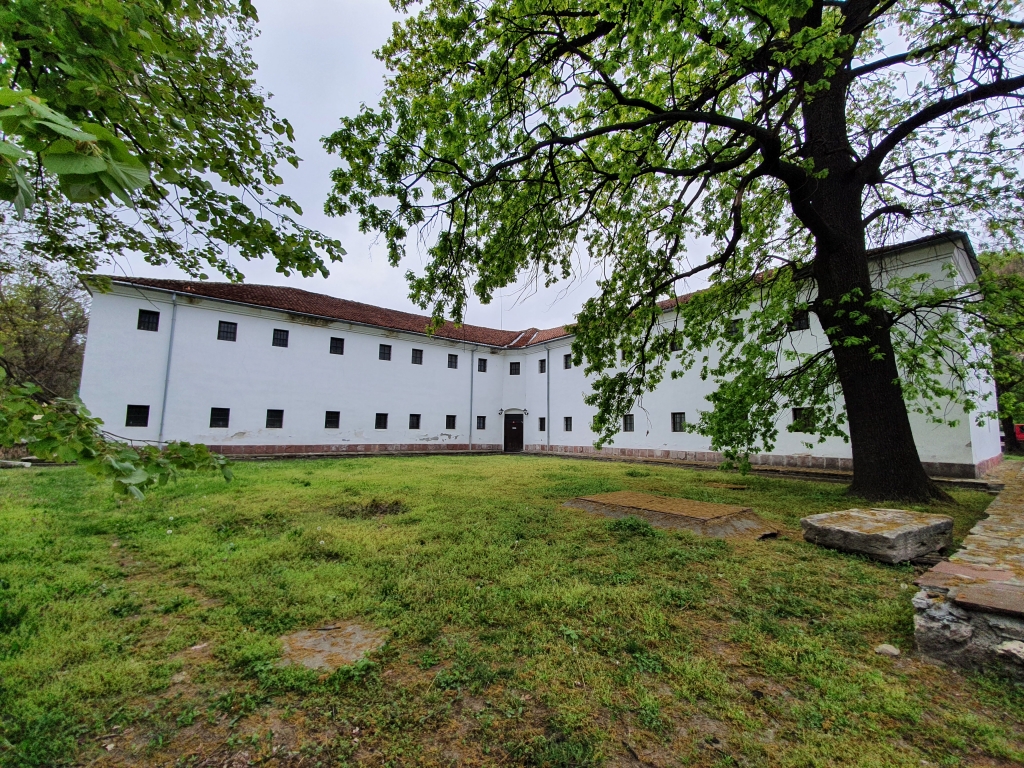 The entrances to the building are in the folds of the central “crossroads”; the wings house the ethnographic exposition and various temporary exhibitions, plus – more recently – the children’s felting club at the Vidin museum. Personally, I hit an exhibition dedicated to fishing as the main livelihood on the Danube and managed to learn five new words for a “fishing net” – grib, nevod, laptash, orie and minchok. What do you know! The ethnographic exposition would probably be seen by every visitor like any other ethnographic exposition, full of chests, distaffs, rugs and towels, until they allowed themselves to look closer and discover the beauty. Woven, knitted, sewn and decorated. 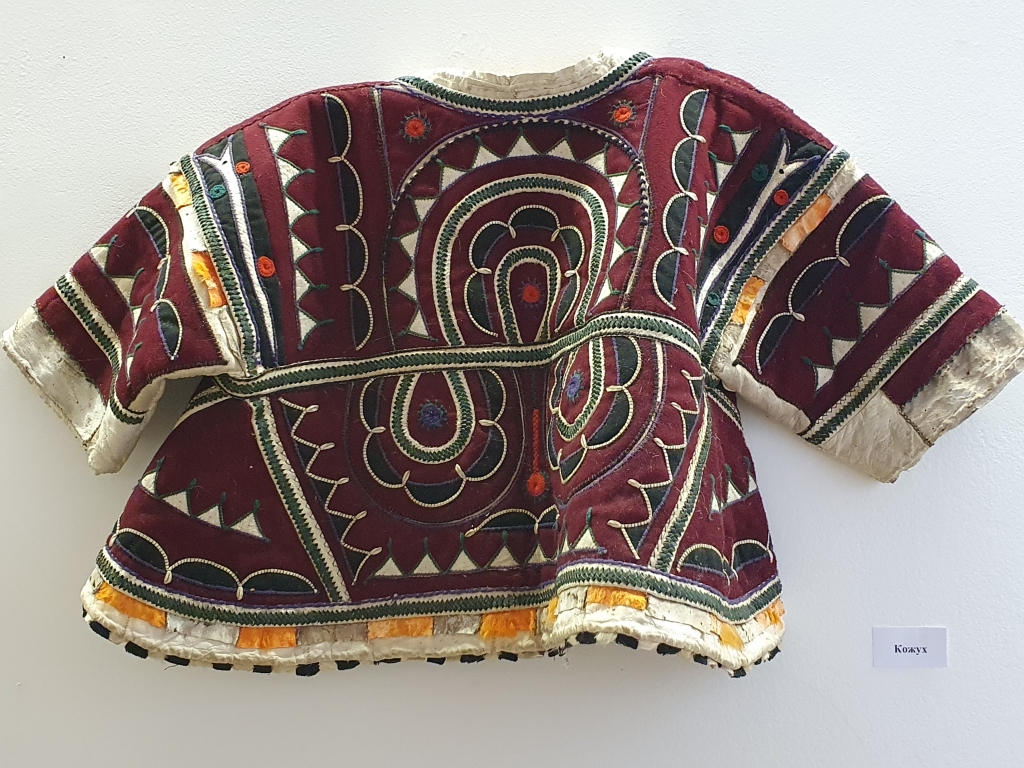 Finally, what would a visit to Vidin museum be without the only fully preserved medieval fortress in Bulgaria! In any season, at any time of the day and in all weather conditions, Baba Vida towers simply cannot be missed. You could miss the relatively new Epigraphic Center with a Lapidarium right next to the fortress, but even if you don’t know what Epigraphy is, I advise you to take a look. Epigraphy, by the way, appears to be the science that studies old texts written not with a pen but with a brush on murals and icons, or carved in stone. Stones like these, I presume. 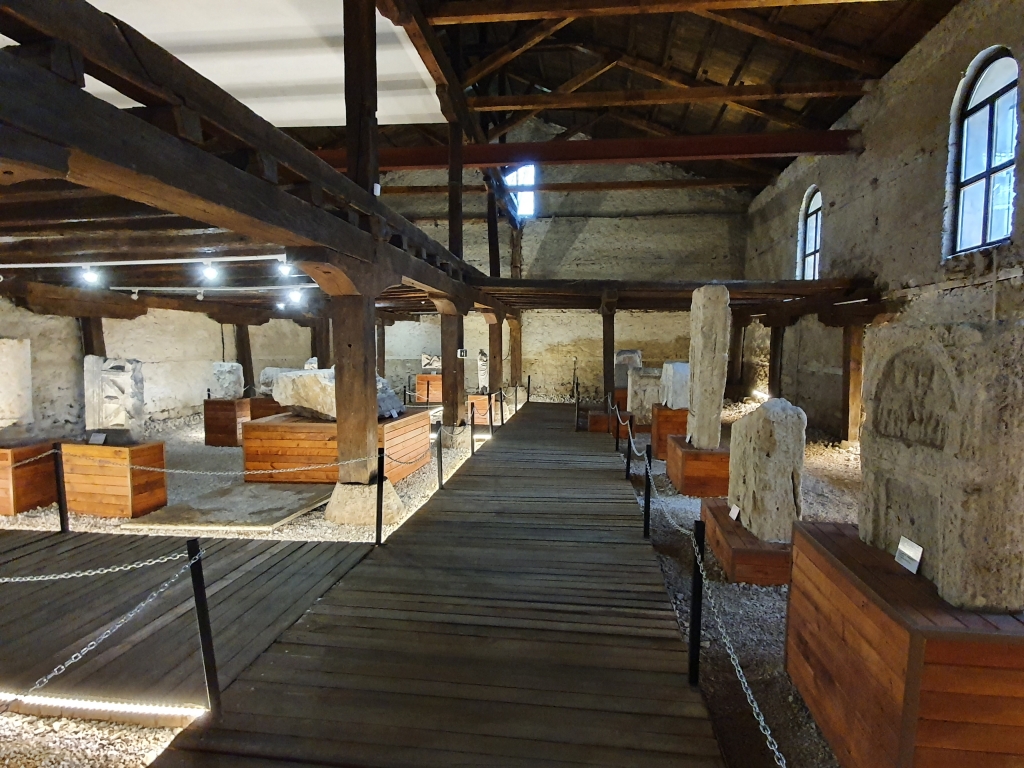 I will not tell you more about the fortress itself. There’s probably no Bulgarian who hasn’t seen her yet, and I advise any foreign guest to do so in short course. Even more than once. With the moat of the fortress, which seems nothing-so-special only when seen from a distance. With the vertical walls, which must be seen just as you stand at their foot. With different levels connected by surprising straight and curved ramps, corridors and stairs. Cannons facing the Danube. Windy towers. The stones polished by a million feet, on which you have to be very careful. And last but not least – the deep openings for air and light, which happen to shine in front of you in the most unexpected places. 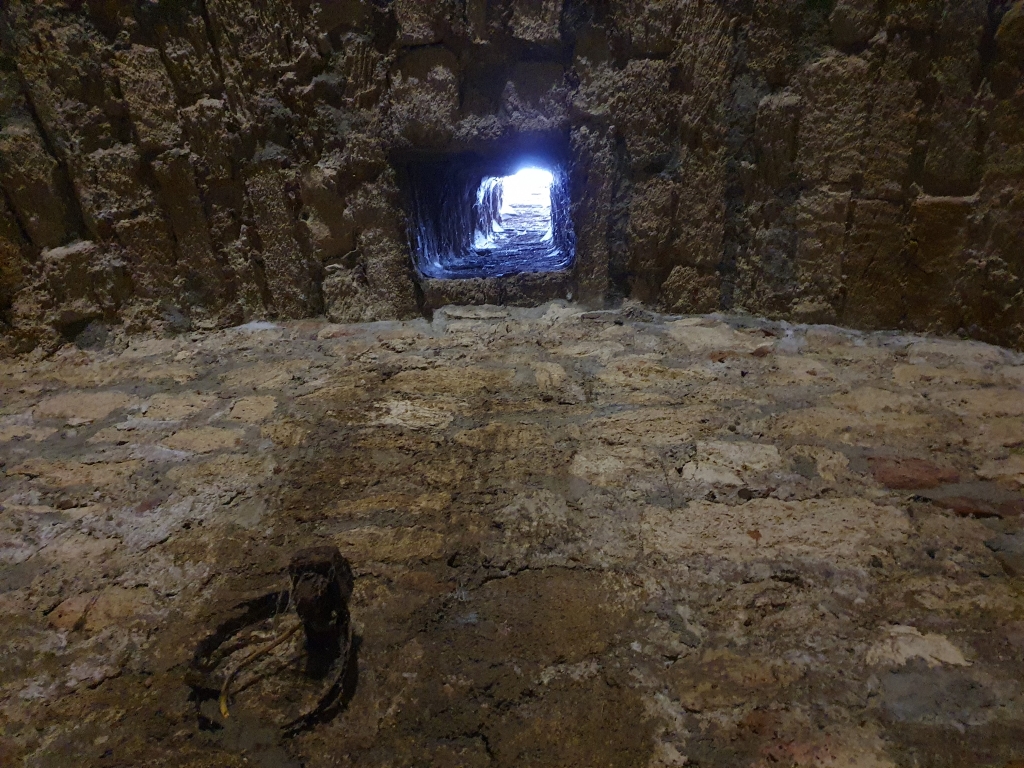 Liked the Vidin museum? More of My Museums coming soon.