With this post, I’m going back to Vienna in the spring of the distant 2008, one year after Bulgaria’s accession to the big European United Family. On the occasion of that accession, in 2007 we had ordered international passports to our kids who were then still under the marital age, and had gone triumphantly to the beach in Greece. So, for the Easter of 2008, we decided to be even braver and see can we now, being already real Europeans, just jump in the car and drive around Europe. Well, it turned out we could. 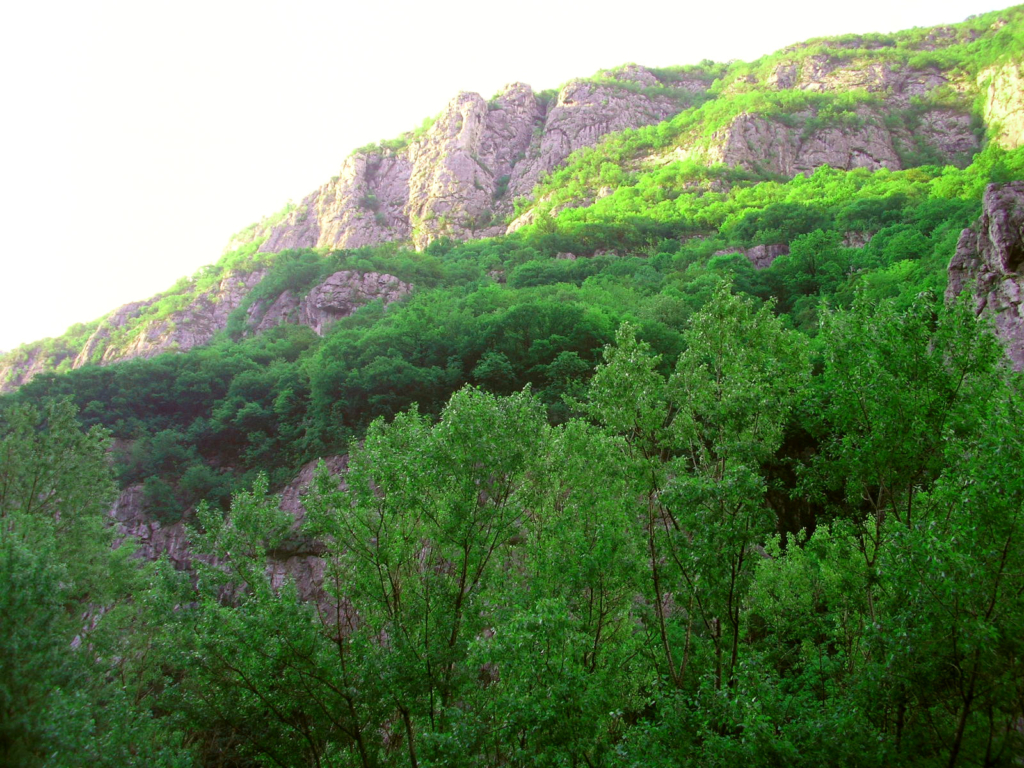 The road from Kalotina to Nis in 2008 (and until recently) passed through the very beautiful Sicevac Gorge.

I don’t remember anything impressing me strongly on the Bulgarian-Serbian border at Kalotina, except that the Serbian passport control was very very bored in the hours before sun-rise and wanted to know whether we had dyed our Easter eggs before starting to wander around like this. Luckily, we had. But I do remember how I felt at the Serbian-Hungarian border when we lined up under the EC sign and went smoothly through while the Serbians were being messed around. Well, almost smoothly as the Hungarian customs officer in white-cloth gloves tried to make me pay for the 10 packs of cigarettes I was bringing (I still smoked then) and gave up only when I headed for the dust bin to throw them away. And I don’t remember the Hungarian-Austrian border at all, that’s how uninteresting the passing must have been. 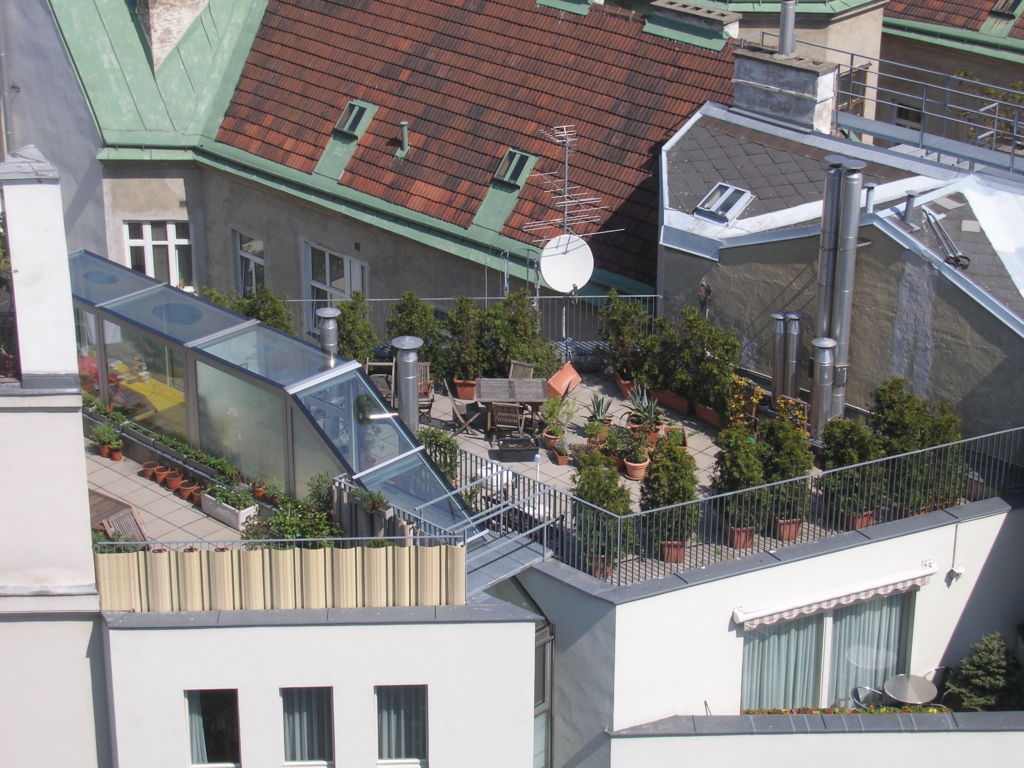 In Vienna, we found accommodation not very far from the center, in a renovated small appartment in an old building. There was an old water tap on the corridor wall which was not working but obviously reminded of a time when the appartments themselves were not tied to the water supply system. Two small things I noticed immediately. One were the rooftop gardens whcih I suppose helped urban people to find a contact back with nature. The second was that public transport was for the rich people. I mean, our plan was to park the vehicle quietly in front of the flat and not think of it for five days while we travel around by tram. There was a stop of that tram right in front. Good plan! But what we found out on the spot was that the prices of city transport were so high that the wandering aroung the center in search of parking spots, accompanied by a lot of inter-family turmoil, was still a better option. 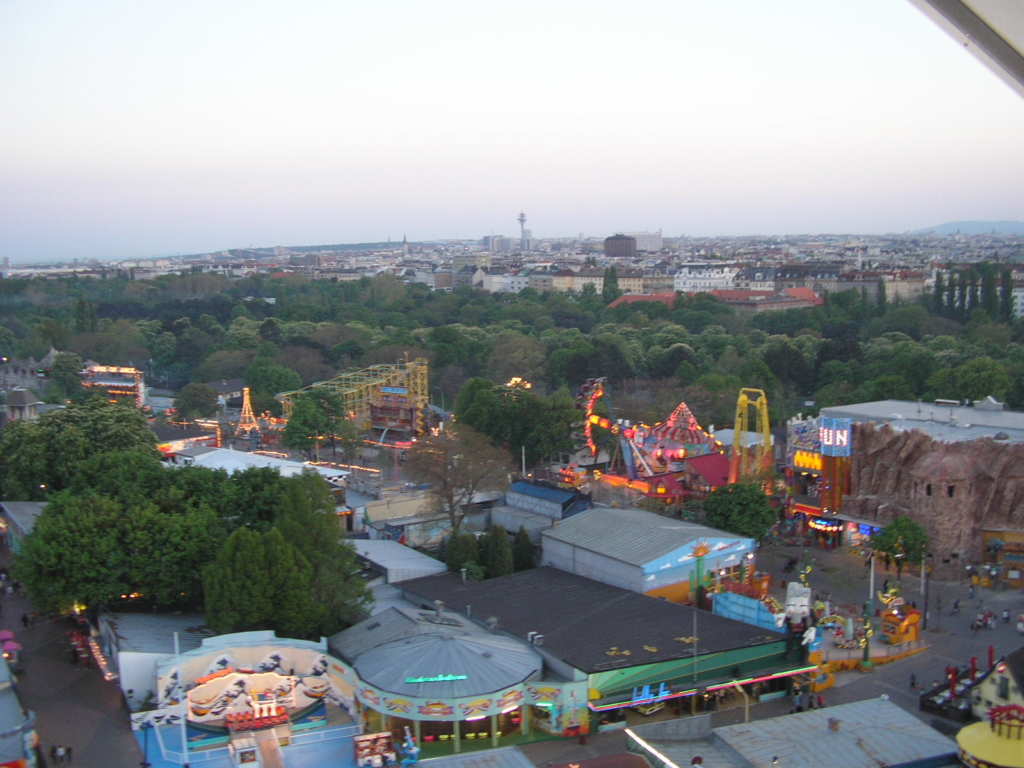 One of the oldest entertainment parks in Europe

Where does one go when in Vienna with children? First of all, there is, of course, the Prater. I must point out that we the adults were no less eager than the children, having in mind that it was our first time in such an entertainment park. We had a lot to catch up, so to speak. The ghost train didn’t impress us much; it wasn’t worth giving money just to get startled. The bumper cars we had seen before which did not stop us from getting in them every evening. The above photo, on the other hand, was made from the oldest Ferris Wheel which in Bulgaria is called the Viennese Wheel (aaa, that’s why it’s ‘Viennese’!).

A three-storey Labyrinth in the Prater

My family liked most the so-called Labyrinths which were two- or three-storey buildings with various challenges to handle, such as a rotating cylinder corridor or tiles that screamed when you step on them. I myself will not forget what I DIDN’T like. A swing like the children’s which rock forth and back, only ‘forth’ and ‘back’ cover more than 90 degrees and when you are hanging face down over the concrete floor from more than 3 meters, the fact that all you hang on is a bar acroos your belly, suddenly gets very alarming. I didn’t have any voice left for more than a week after we got home… 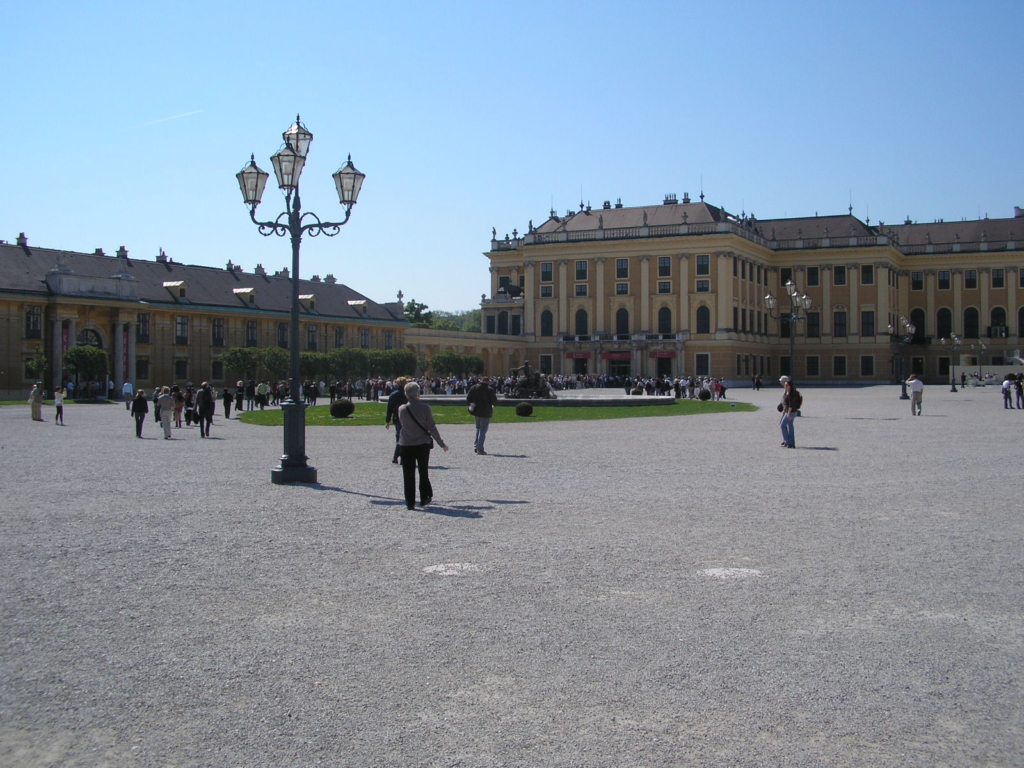 At the entrance of Schonbrunn Palace

Of course we also visited Schonbrunn Palace. Several times. The reason was that the first time we only went round it in order to reach the oldest zoo in the world. Not to mention the fact that the long queue of small figures you see on the photo above waiting to enter the palace itself, was quite discouraging. The zoo wasn’t bad at all, we actually quite liked it and the blisters on our toes were of the right quantity, so it was all fine. It was the first time we saw many animal species in the flesh and we remember it very well. Me personally, I was mostly impressed by this fellow: 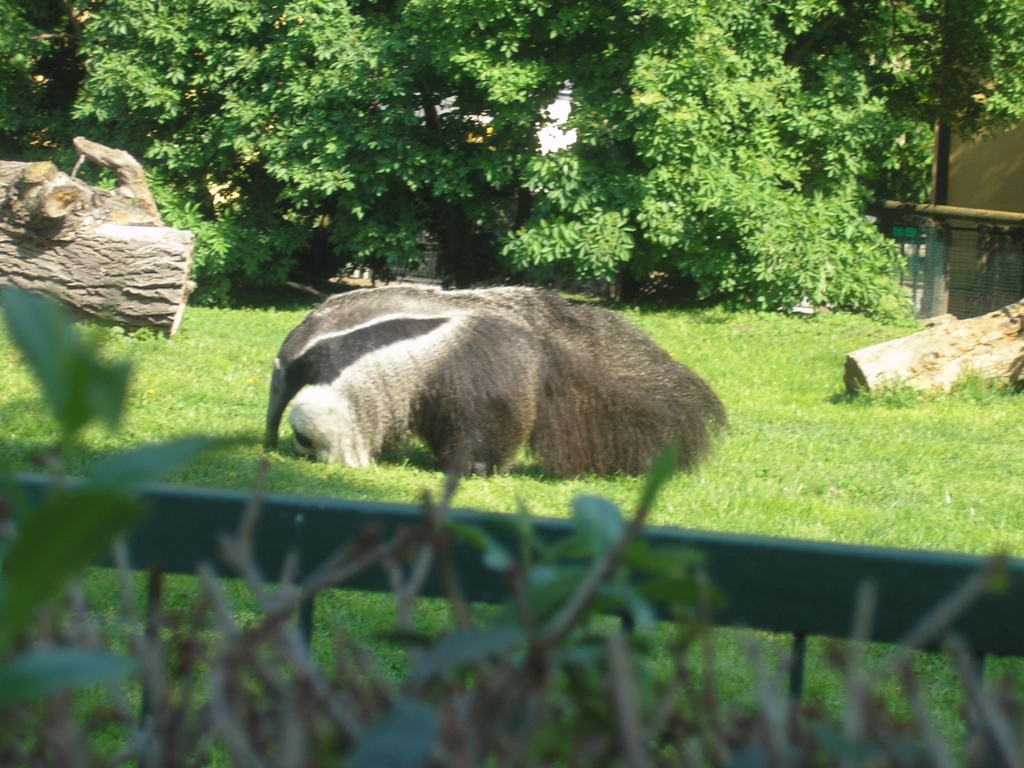 I hadn’t seen an ant-eater before, so I was very surprised how big he was in real life. And nothing like the cartoons. if you love animals, you can easily spend a whole day in the Vienna imperial zoo. There’s also the Vienna Sea Home or the Haus des Meeres which occupies several floors and offers meetings with all kinds of water inhabitants (as the name shows), plus a lot of terrarium creatures. Again, it is up to you to decide how much you’re into it; it is also a place where you can spend a lot of time. 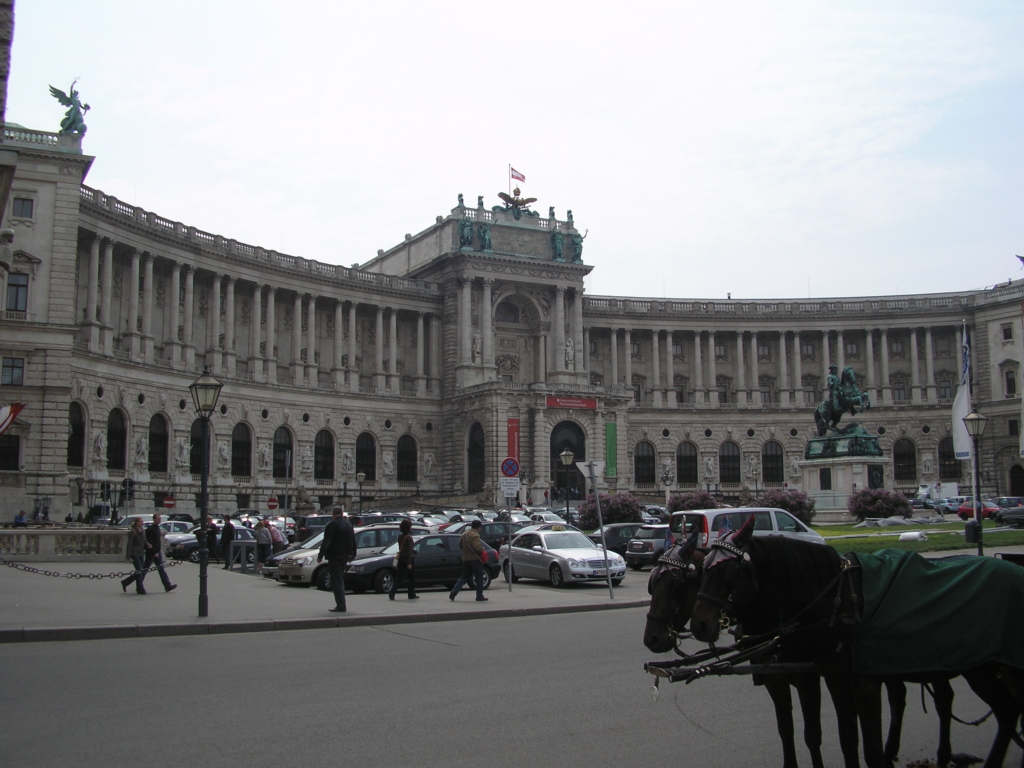 What else did we do in Vienna? We walked around the center, saw a lot of lovely buildings like the one of the Vienna Library and had some Vienna coffee with sweets. We checked the Viennese Mc Donald’s. We saw a visiting exhibition of the Egyptian Museum in Cairo. We didn’t see Stephansdom or the St. Stephen Cathedral as it was closed for renovation. The same fate has got to the Natural History Museum, so we missed that too. But we did wait at the long queue of Schonbrunn and saw it from the inside as well. The best thing, however, was that spring was there, the gardens were green and the air was fresh. My 10-ish years younger Self did obviously feel very good about it. 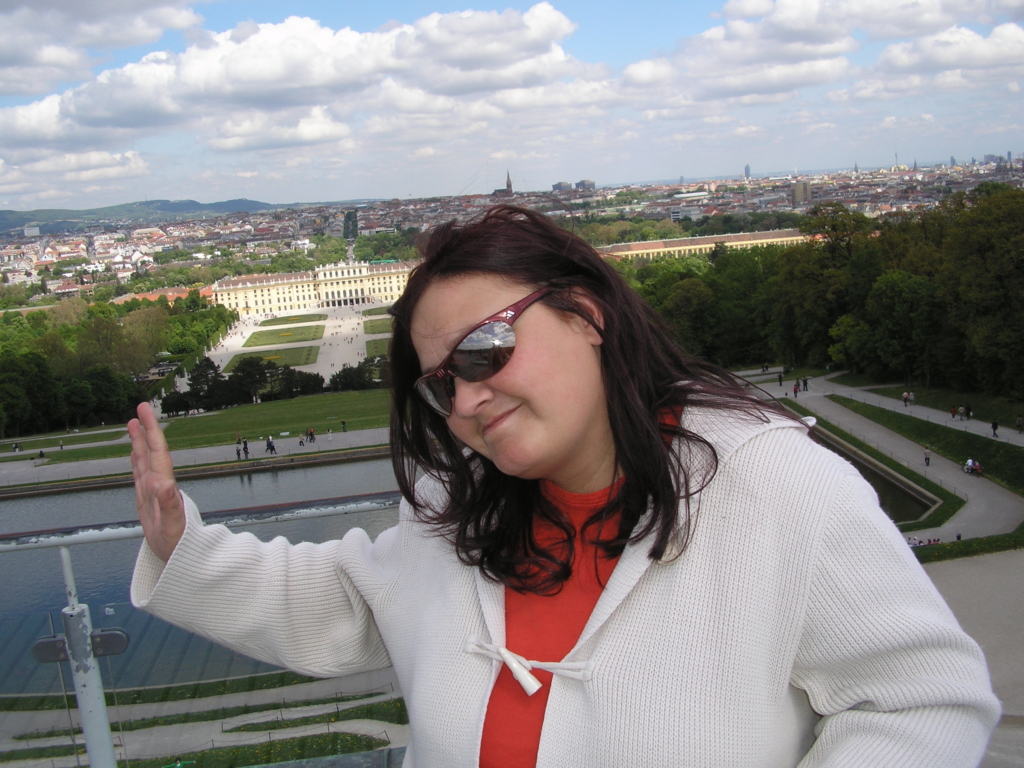 You may read more about me here.