Nevena and the village of Grandma Kera

Home/Friends/Nevena and the village of Grandma Kera
Previous Next

Nevena and the village of Grandma Kera

You will never just find yourself there, unless you are very good at getting lost. I am talking about the village of Kereka, with an emphasis on the first E, which is located about 9 km from Dryanovo town. All 9 kilometers are winding and in mid-July covered with birds eating wild pears that have fallen from the trees. The road is surrounded by these trees, and between them is a varied panorama of fields, groves and distant rocky hills. Here and there disturbed by detours for places with even more interesting names such as Turkincha, Dlagnia and Balvantsite. I will not even mention the more distant Gozdeyka and Plachka. 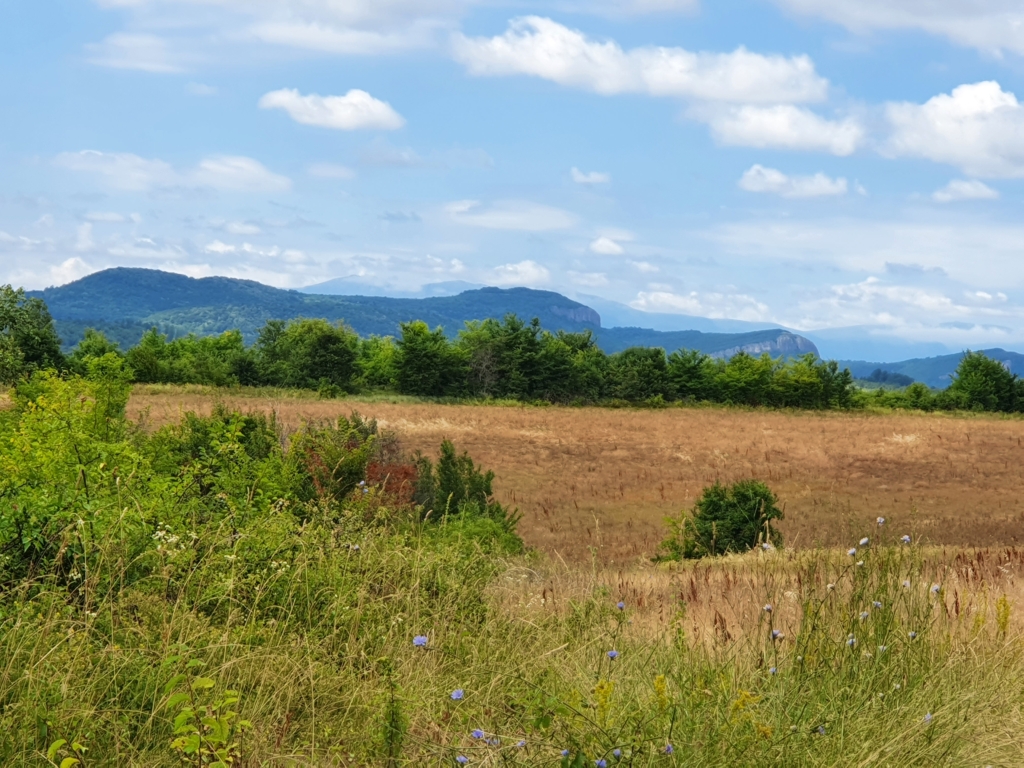 In short, you can only get to the village of Kereka if you go there on purpose. Today it has less than 100 inhabitants, but even in its best years (late 19th century) there were not much more than 800. It emerged together with a group of other settlements around 1600 as remote neighborhoods of Dryanovo, each named after its founder. Gesha, for example, was founded by Old Ganyo Geshev; Zaya is named after Grandpa Nikola, who “roamed the hills like a rabbit – Zayak in Bulgarian”, and Kereka is the village of Grandma Kera. As far as I understand, not much is known about her, except that Kereka seems to be the only one of these villages named after a woman. And apparently that’s how the village went, hosting impressive women, because my friend Nevena also lives there today. 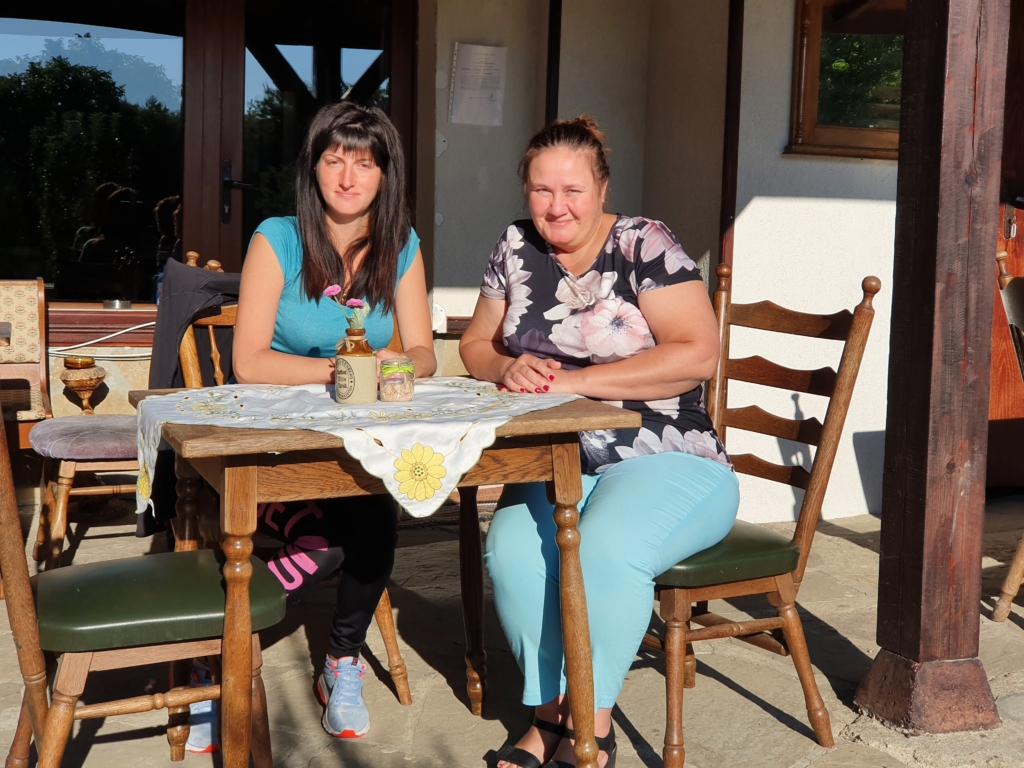 Nevena is the host of Kereka Guest House (you can also see the site as a Kereka Villa) in the center of the village. She was born in Veliko Tarnovo town, but she used to spend her summers here since she was a child, and then she just stayed because they got two neighboring old houses and decided to renovate them and welcome guests. She and her family. For example, her father, a professional builder, took care of the renovation. Here and there in the houses are preserved the old elements, intertwined with the new ones. Like this: 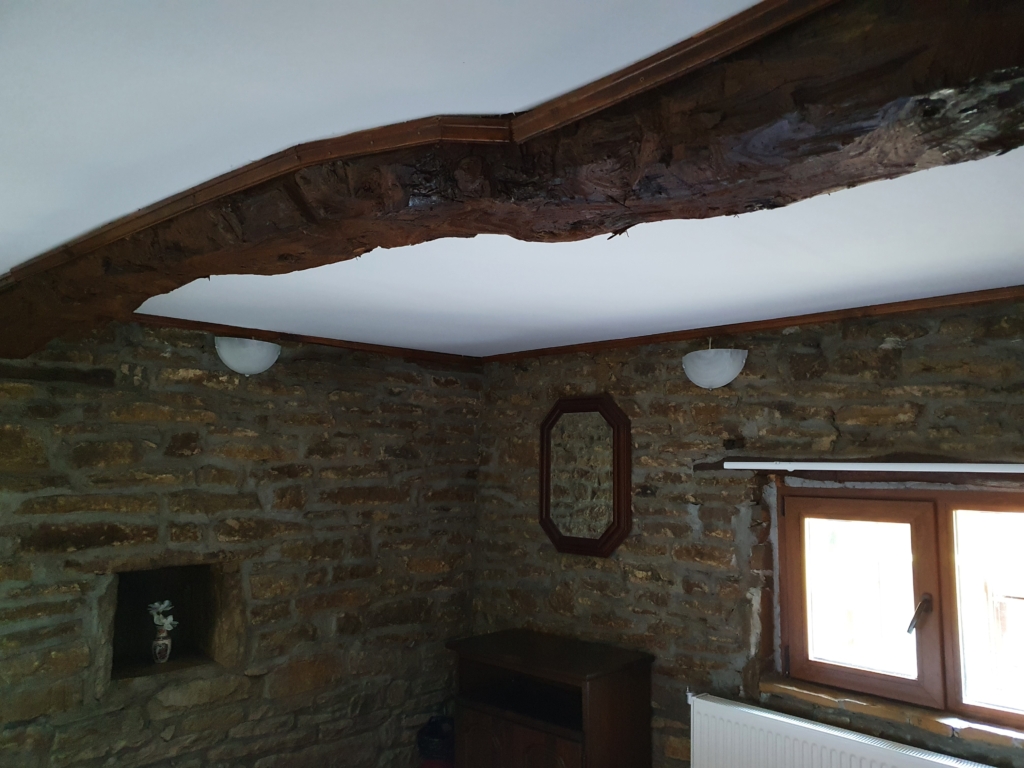 The place is ideal for companies of about 20 people. There is an indoor dining area for when it’s cold, and seating outside in the yard for when it is warm. There is a kitchen with everything you need and an outdoor barbecue for roast-lovers. In the combined yard of the two old houses you can lie on the grass, play cards in one of the separate seating areas, sun-bathe on the loungers, and when it gets too hot, take a dip in the pool. If the company contains children, there is a children’s pool too and children’s play areas. So they don’t get in the way while you play cards. 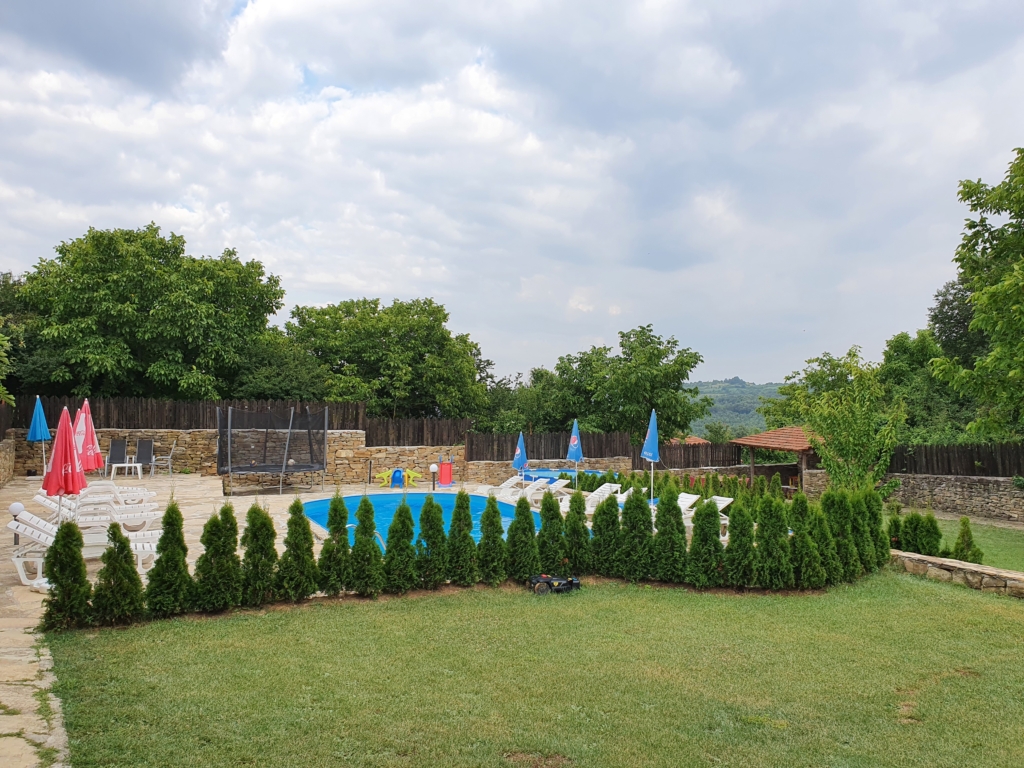 Apart from running the guest house, Nevena is also the heart of public life in Kereka. At her initiative, the local community association was restored, which is now gradually restoring the building of the village community center. The large hall has been completely renovated, as well as the bathroom, and is used for various gatherings, learning folk dances, celebrating birthdays and welcoming the New Year. There is even a small gym in the side room that is never locked. The Community Center library has been restored too, and people continue to carry books waiting to be sorted. If you are inclined towards volunteering, they will be happy to have you in Kereka. 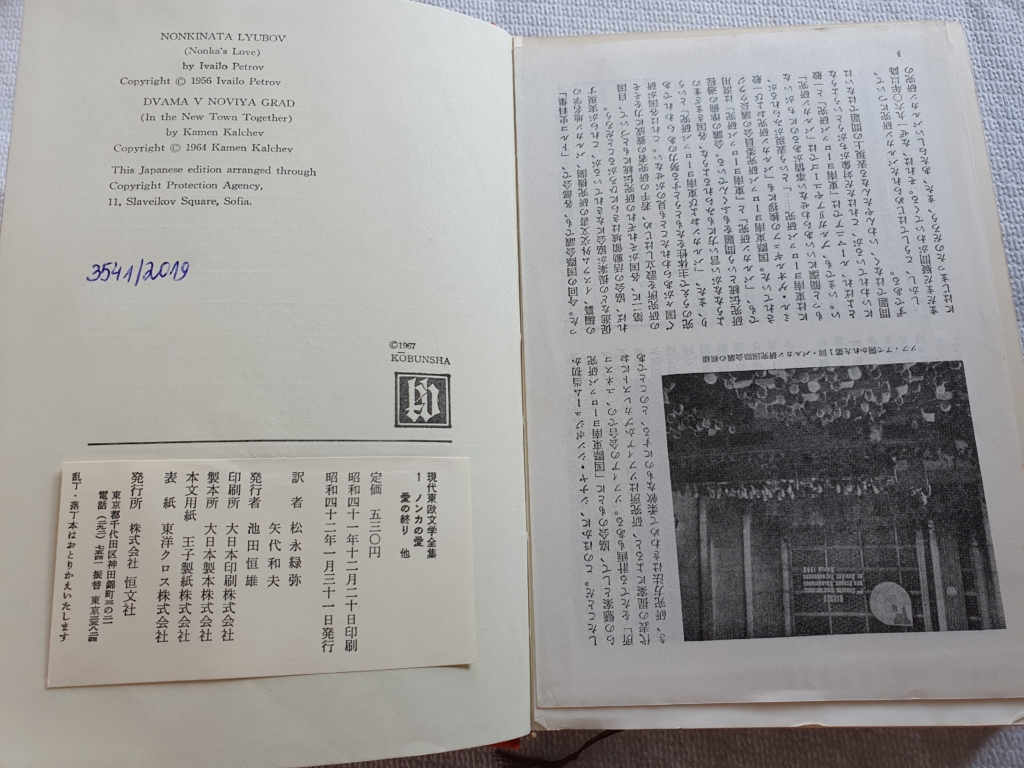 One of the most curious possessions of the Community Center library is a Japanese edition from 1967 of “Nonka’s Love” by Ivaylo Petrov and “Two in the New Town” by Kamen Kalchev. The latter is a native of Kereka and has sent the volume specially to the community center in his native village, with a request to keep it most carefully. Opposite the community center is the village hall, also in a very decent shape, and in its garden is the oldest monument dedicated to the brothers Cyril and Methodius (at least so says the inscription) from 1888, on the occasion of the 1000th anniversary of Methodius’ death. Recently, local activists have taken care of it, protecting it with a shed and maintaining the garden. 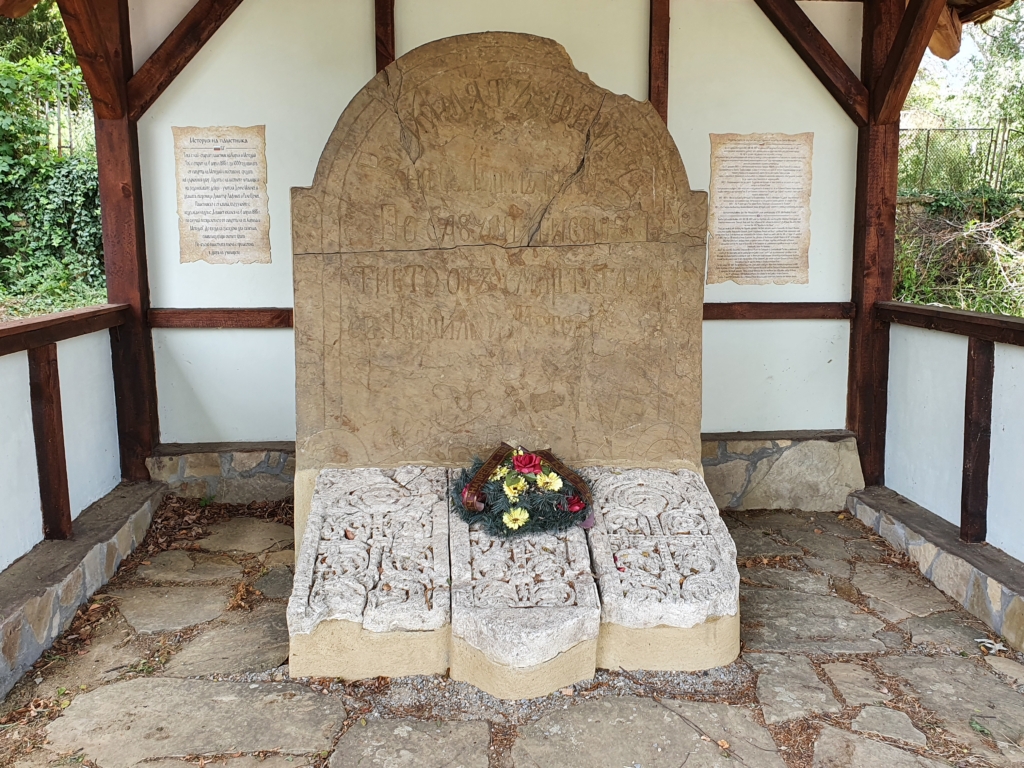 From the village of Kereka you can travel to Dryanovo, Gabrovo, Bozhentsi and Veliko Tarnovo; the area is full of history and natural beauty. You can wander around the surrounding hills if you prefer. You can lounge in the garden of Kereka Villas with a book from the library in the community center and a glass with your favorite drink in hand. You can get tanned by the pool after a good night’s sleep in the fresh air and the rural silence. And after having breakfast with Nevena’s fluffy mekitsi (special pastries), with homemade jam. I fully recommend them! 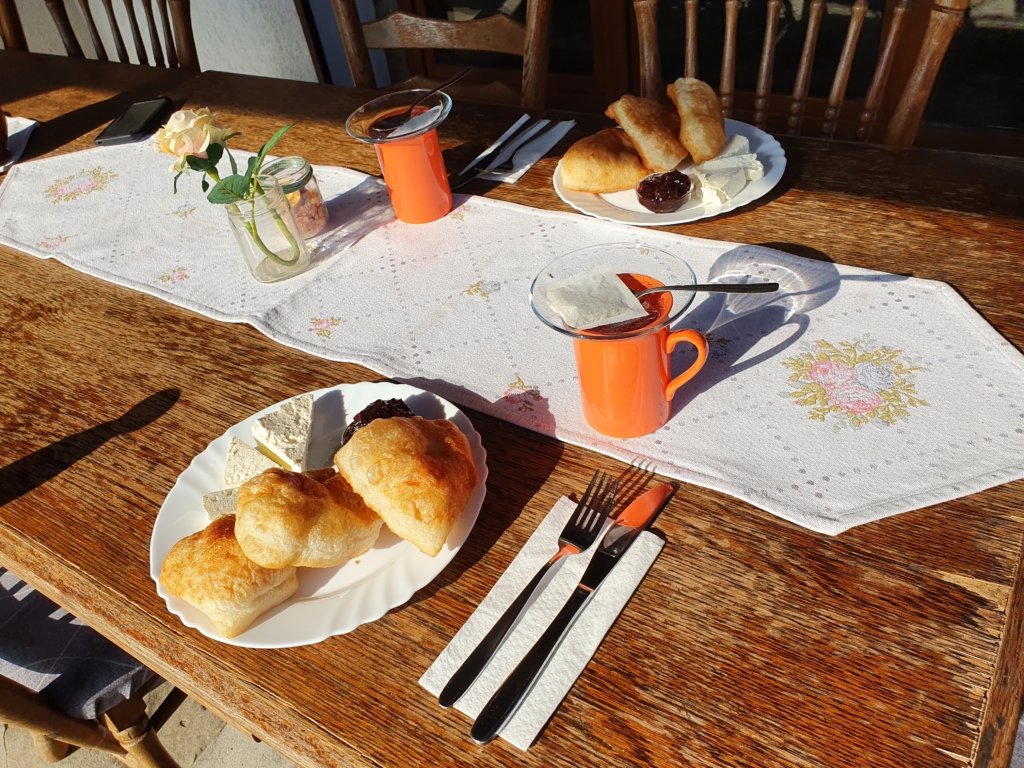 More of my friends you can meet here.