For the 3rd of March

For the 3rd of March

The subject of this article is the National Holiday of Bulgaria, March 3rd. We may not be feeling so bombastic about it like, for example, the Americans about July 4th, but it is ours and we like it. This particular March 3rd happened in my acquired-by-marriage hometown, Blagoevgrad. And more precisely, in the Blagoevgrad Museum where there was a free patriotic lesson for all visitors. The local historic association with the appropriate name “Tradition” had prepared a demonstration of costumes and weapons from the time of the Russian-Turkish War back in the 19th century. They themselves had put much effort in their own branding, from the boots to the hats. They had even made a copy of the Samara Flag (one of the most important symbols of the Bulgarian Army) with which I had the honour of taking a picture as visible above. 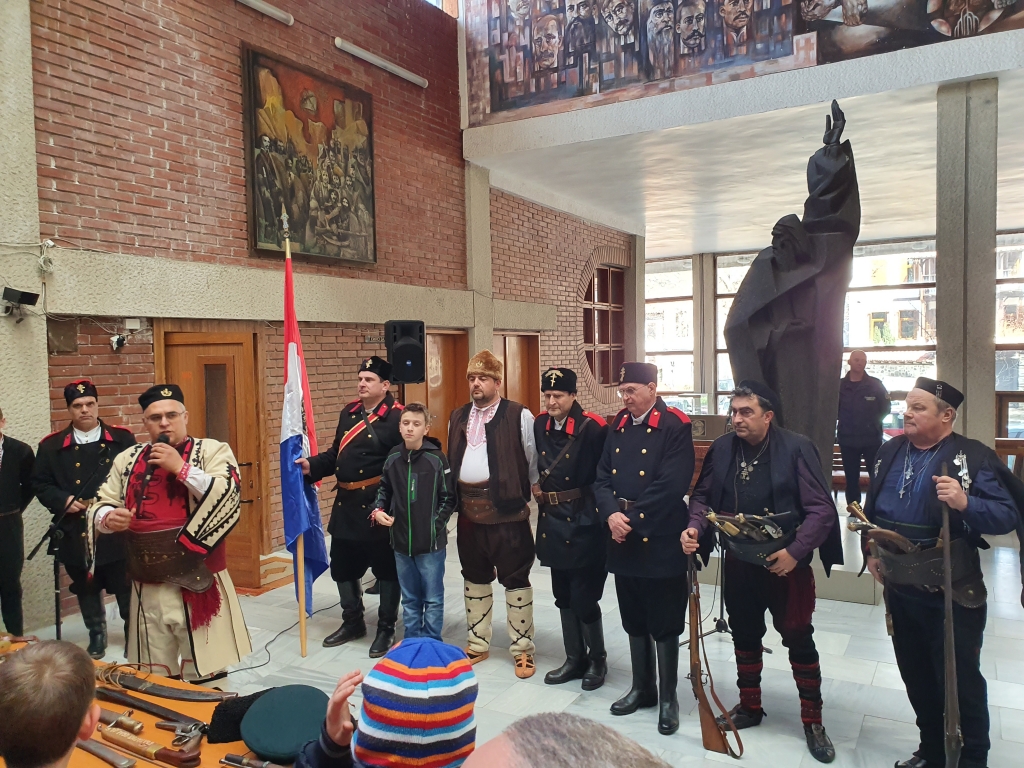 The lesson started at the Museum foyer where they explained to us the differences between the various types of knives, sabers, bayonets and guns. Honestly speaking, a very not-interesting topic for me but all the boys – small and grown up – were enchanted. The fun continued outside in the sun, with the demonstration of how to load a gun with “front charging”, that is, charging through the gun mouth. I admit, I never thought that the slowest and more worrisome job on a battlefield would be not the hanging in the mud, freezing to death and other similar military misfortunes but the loading of your gun while the other army has weapons three times faster to prepare for shooting. There, see for yourselves and have in mind that I cut out the half-minute digging for the small chip that was stuck in an unknown depth of the warrior’s pocket:

The lesson was followed by the opening of an exhibition of photographs of national costumes from different parts of the country, while the pretty ladies from the acapella singing group at the Blagoevgrad Community Center greeted us with several of their songs. The exhibition is to stay awhile at the Museum, anyone is welcome to see it. 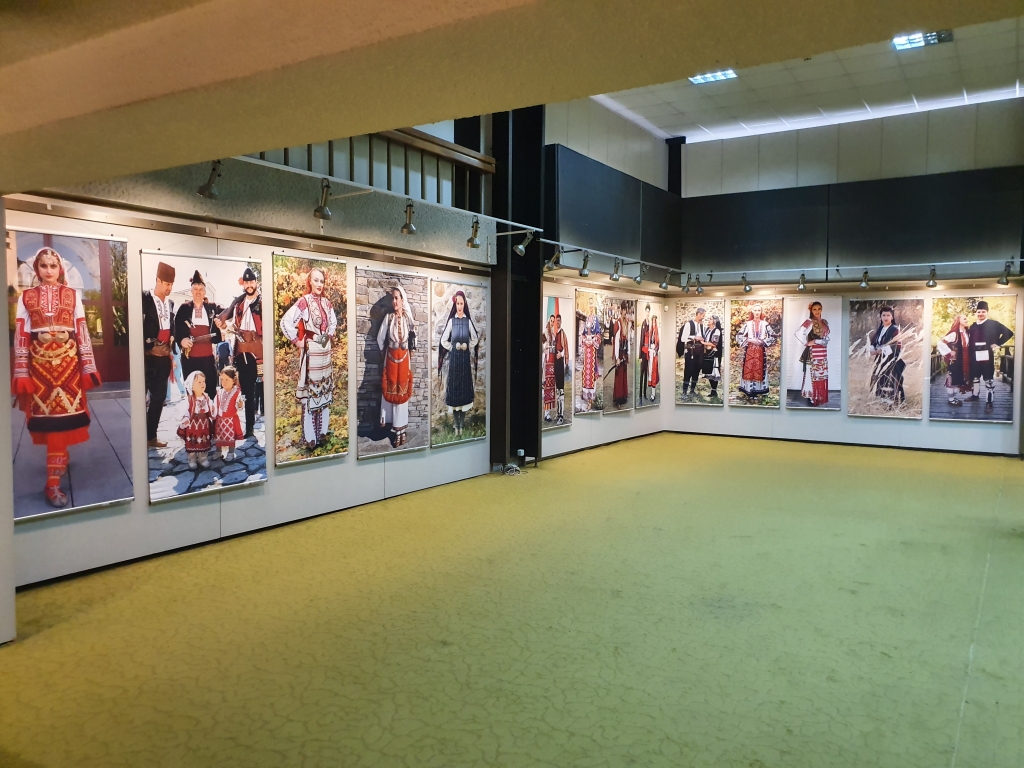 And while we are still at the Blagoevgrad Museum, I’d like to tell you what else is there to see. The lower level contains the Nature Section presenting the biodiversity of Southwest Bulgaria. Next to it is the Archeology Section presenting, in its turn, the ancient past of that same corner of our country. The inter-floor landing surprises us, beside the interesting minerals, by the biggest teeth I have ever seen ‘in the flesh’. Of course, they are not human but belonged to some long-lost inhabitant of our planet. On the first floor, there are the expositions dedicated to the national liberation movements. To me, however, of greater interest is the upper floor hosting the Children’s Museum Corner, the Augmented Reality Room, the ethnographic exhibition and the exhibition of the history of Blagoevgrad. 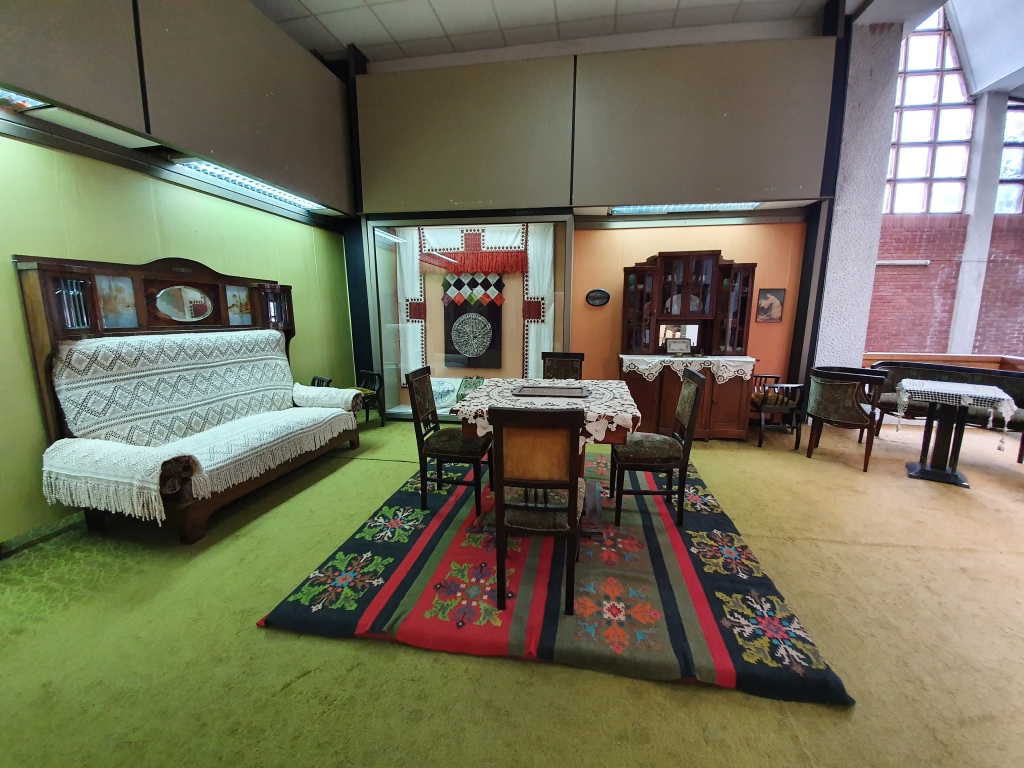 Both the ethnographic exhibition and the exhibition of the history of Blagoevgrad may seem to you exactly like many other similar exhibitions in many other Bulgarian museums – traditional costumes on mannequins; rugs hanging from the walls, and the low cabinets contain maidens’ belts, woolen socks, silver buckles and other pieces of jewelry. Collections of pots stand on the floor. But, like in any other museum, the trick is to look into details. Then you discover all sorts of interesting things like dolly sets of miniature cups and trays (for grown-up girls), colorful painted wooden boxes that could hide literally anything, and these amazing flip-flops that I have absolutely no idea how to wear. 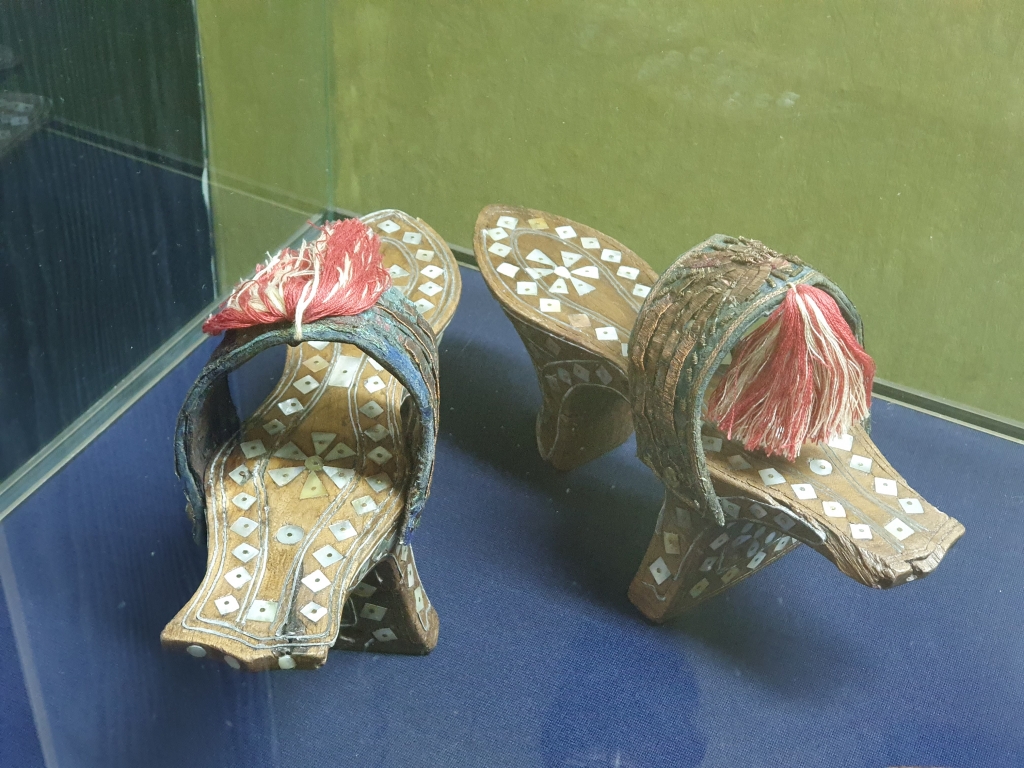 There is also a super-strange baby cot where we couldn’t fathom how the baby was supposed to be laid, although we spent some time contemplating together with other visitors; there are arranged furniture collections from some rich man’s home, and a classroom with peeled desks and a huge movable abacus. We found out that Blagoevgrad used to have a soda-and-lemonade factory, as well as a ceramics manufacture bearing the very Bulgarian name of Elvira. That people coming out from the haute-couture shop were stepping directly into the mud of the main street which was, at the time, unpaved like all other city streets. The board with announcements and ads informed us that the Rooster Soap was the best washing decision and – obviously very important at the time! – did not destroy underwear. I personally liked most the flag of the local tourist union, naturally green, with the embroidered slogan “Through Tourism – for Bulgaria”. What can I say, people really understood tourism once upon a time, and there’s no argument about it! 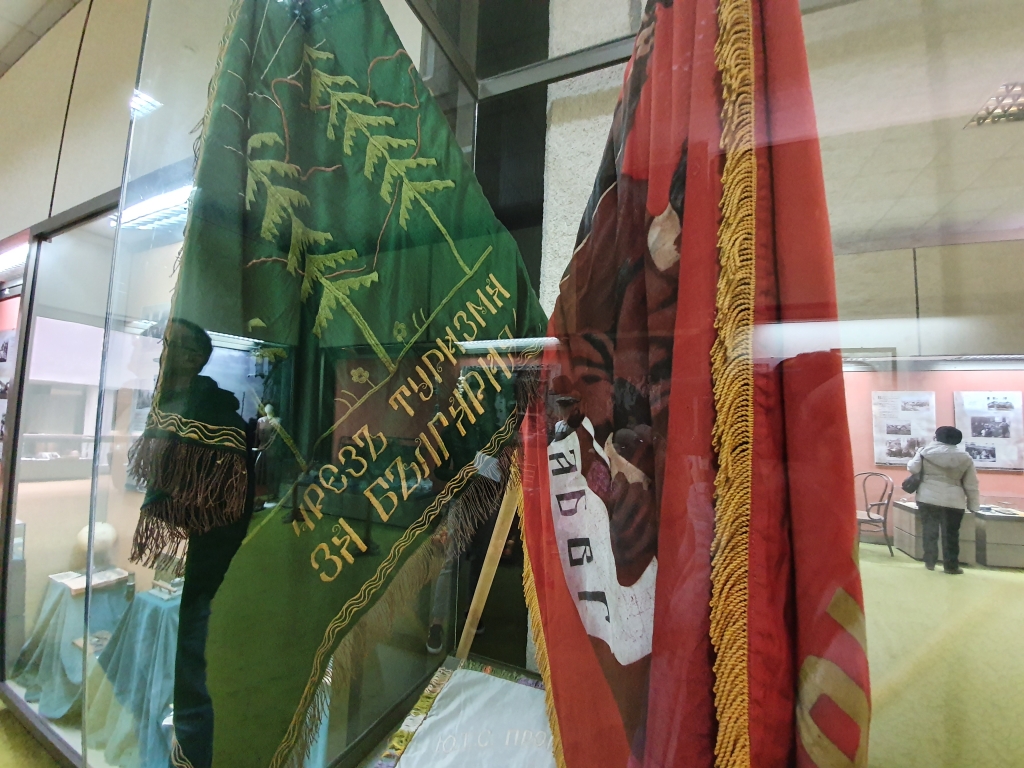 If you are into museums, you may also check my article on the National Historical Museum of Bulgaria.