The capital B in the title is not accidental; it stands for the well-known British town of Bath. The town is included in the UNESCO List of World Heritage due to the piling of history around. The existence of warm mineral springs naturally caused the birth of a large Roman city ever back in the 1st century AD. In the Middle Ages, though, local people had to depend on such peasant things as sheep, the basis of the mighty British wool industry. True popularity came to the town in the 18th c. when it became the Resort of Resorts in the whole of Britain. Every fan of classic English novels will tell you where elderly gemtlemen with gout used to go to mend their health and where innocent British mademoiselles were taken by their aunts to dig their paths through Society. I have now run out of capital letters, so I jump to the present day when Bath has been given the honour to gain fame for yet another thing, namely the fact that my daughter decided to study physics at its University. And we decided to visit Bath and her for Christmas. This story is from last year but here comes the time for it to be told now. 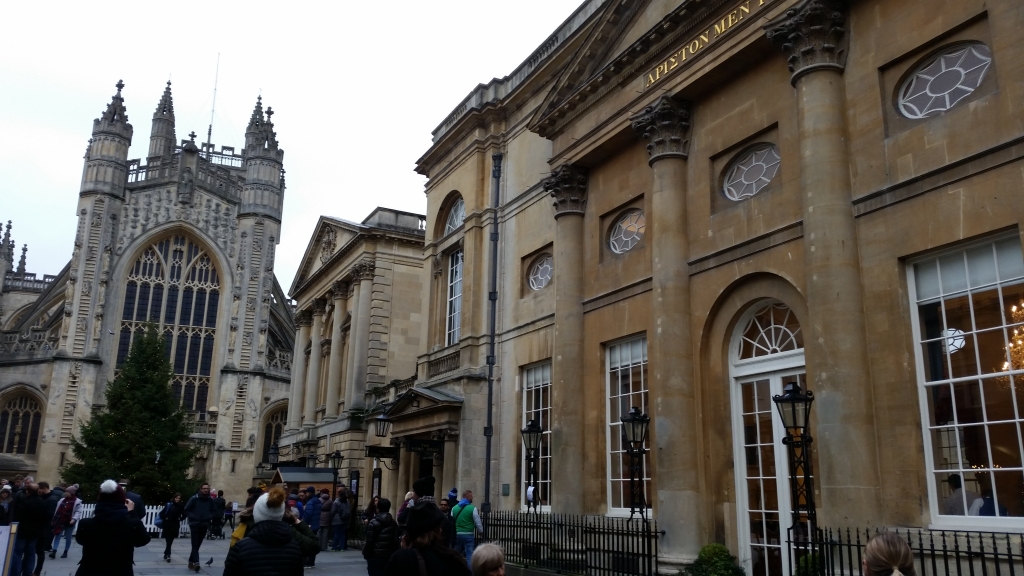 This is what the center of Bath looks like in the festive Christmas and New Year days. Having in mind that the town lies only some 120 km from London, it is a very convenient and pleasant destination for one-day trip for the English capital-dwellers which explains the crowds. Of course, the trip is only pleasant if the latter capital-dwellers have been smart enough to visit Bath by public transport. Because, if they come by a private car or – like us – by a rented one, they will inevitably become victims of the Bath Parking Problem. I apologize for using capital letters again but this Problem deserves them. In the very center of Bath, there is nowhere to park which is totally understandable. But where can one leave their vehicle then? There are two types of parking lots, both paid – for short- and long-term parking. The first ones are closer to the center but you cannot leave your car there for more than 4 hours. The others somewhat belong to the Kingdom of Far Far Away and the long-term stay there is one day. Which means that if you are planning to stay in Bath overnight, in the best-case scenario you have to set your alarm for 8.00 in the day after Christmas and run to the above parking lot and pay the new-day fee, as the nice Bath police officers appear at 8.30 and start sticking expensive Christmas cards on your front window, 75 pounds each. In the not best-case scenario, you may have to move the car to another long-term parking lot first. 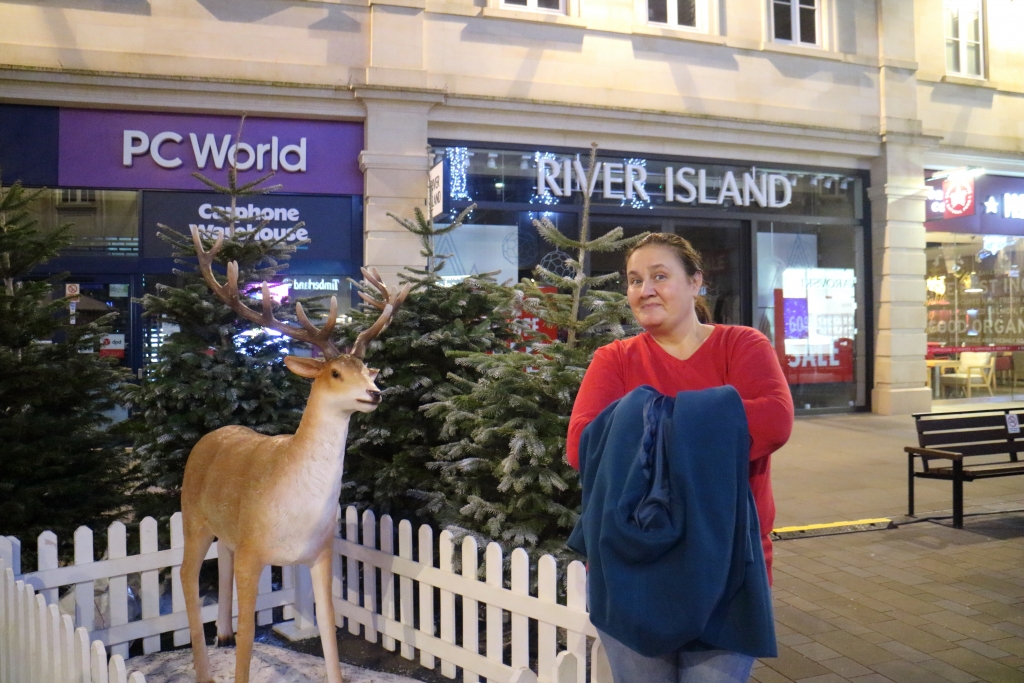 The point of this photo is not to show how one feels as thick as a herbivore due to the already described issue with the parking. It may seem a tiny insignificant problem to you but I’d like to see YOU spending 10 days in Bath with a rented car which you don’t know where to shovel. With added value included in the form of two fines which I consequently challenged and got them cancelled but something like this can spoil your whole holidays. And also, don’t think parking lots in Bath are cheap; this is one of the most expensive towns in the UK at all. So, the photo. The point is to illustrate my recommendation to take a walk around Bath on Christmas Eve. There isn’t a single soul on the streets and you have the entire center all to yourselves. Furthermore, it is beautifully lit up and you can enjoy every detail better, even if the detail is as big as the huge Bath cathedral – 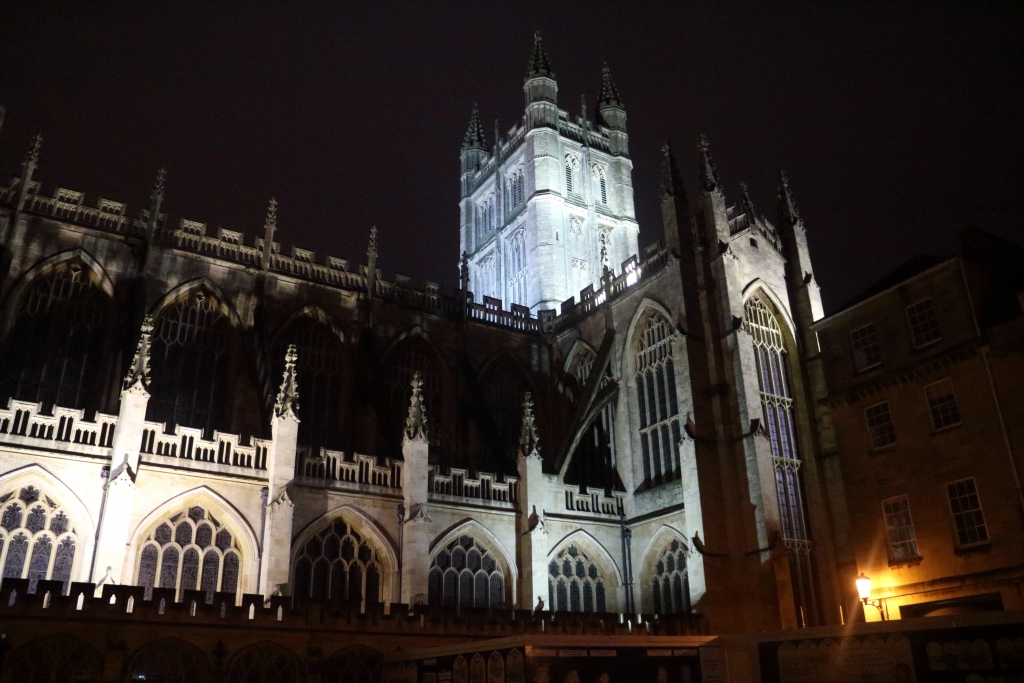 Outside the very center, there are other nice places to walk. There are wonderful bridges over the Avon River which are depicted on almost every postcard of “Visit Bath” together with the colourful Royal Crescent (I have no idea why it is called so; I mean, the buildings ARE arranged in a semi-circle but why Royal?!). Along the river itself, there are pleasant alleys and meadows with trimmed grass. There are also parks, also trimmed in English and looking very orderly. I recommend again an evening walk when the crowds have thinned out, despite the fact that for some reason the parks are not so well-lit 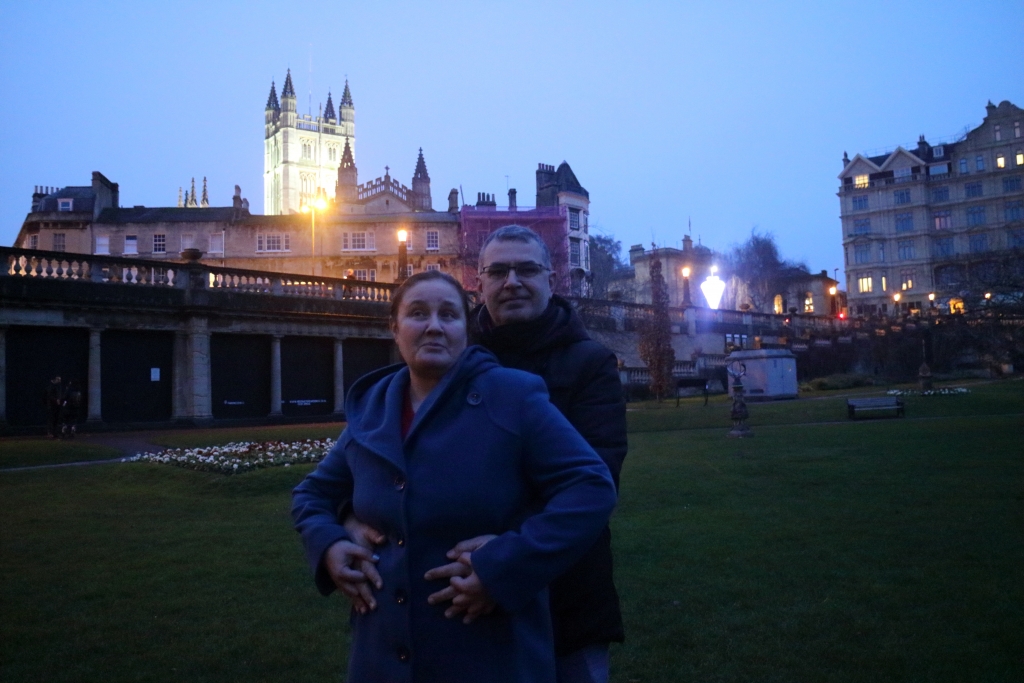 What else is there for me to tell you about the English Christmas Bath? Be careful what flour you buy from the shop for your Christmas bread as there are n types of it and you may easily miss the proper one, producing the darkest brown holiday bread ever. Buy normal potatoes for the salad; do not get tempted to try the sweet ones, you’ll probably not be happy with them. Also, when you see a bottle labelled Mulled Wine which costs half the price of other red wines, have in mind that it is specially prepared to be consumed as a hot beverage. And finally, despite all Christmas promotions, be prepared with a substantial amount of money as the United Kingdom as a whole and Bath in particular are not very generous to the Eastern European. I wish you all a very Merry Christmas and wonderful time in the company of your beloved ones! 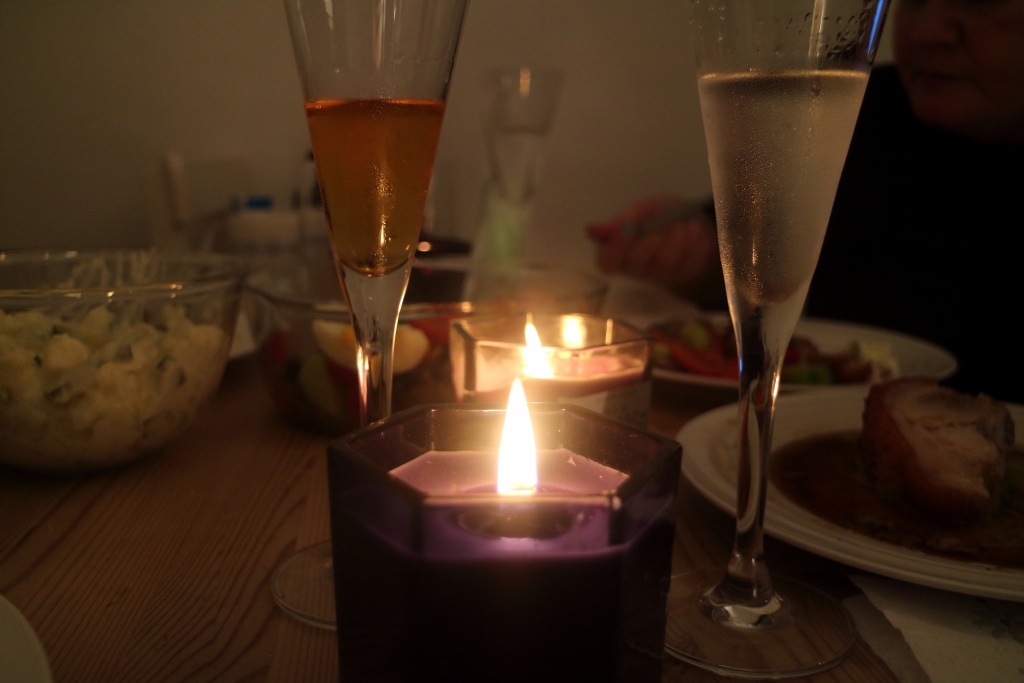 After we visit Bath for Christmas, we can also do an English New Year.