A Feast in Marash

Home/World/A Feast in Marash
Previous Next

A Feast in Marash

It’s really quite clever to know a good Gastronomy expert. And even more so if s/he invited you to accompany them while organizing a gastronomic tour in the neighboring big city. In my case, it was my colleague Hulya Meral, with whom we work together in Adiyaman. And our gastronomic tour took place in the nearby town of Karamanmarash, better known only as Marash among the local population. The latter was its original name; the word ‘Karaman’ (translated as ‘hero’) was added in 1973 in honor of some important anniversaries. 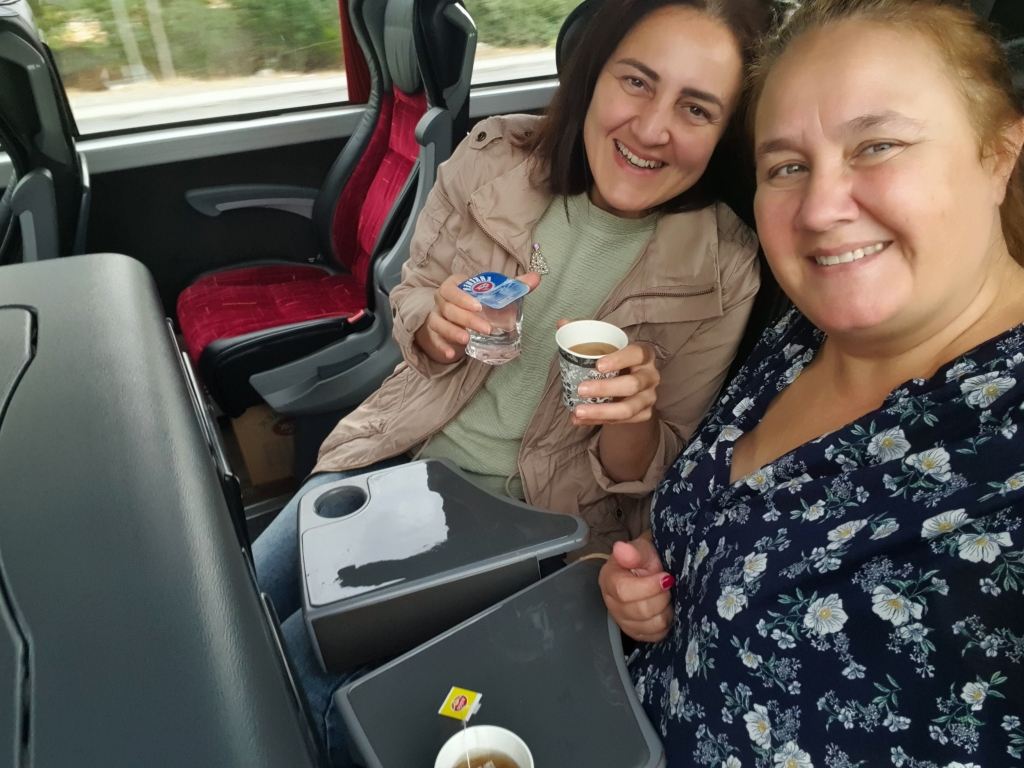 First, I consider it appropriate to say that in the Turkish intercity buses, even for a distance of two and a half hours, there comes a neat young man in a flickering shirt and serves water, coffee, tea and other soft drinks. It was very surprising for my friend Hulya that I was seeing such a thing for the first time. Our trip to Marash went quite pleasant, and after arrival we went straight to a local restaurant. We paid the necessary attention to a serving of Mumbar – bowels stuffed with bulgur and spices. 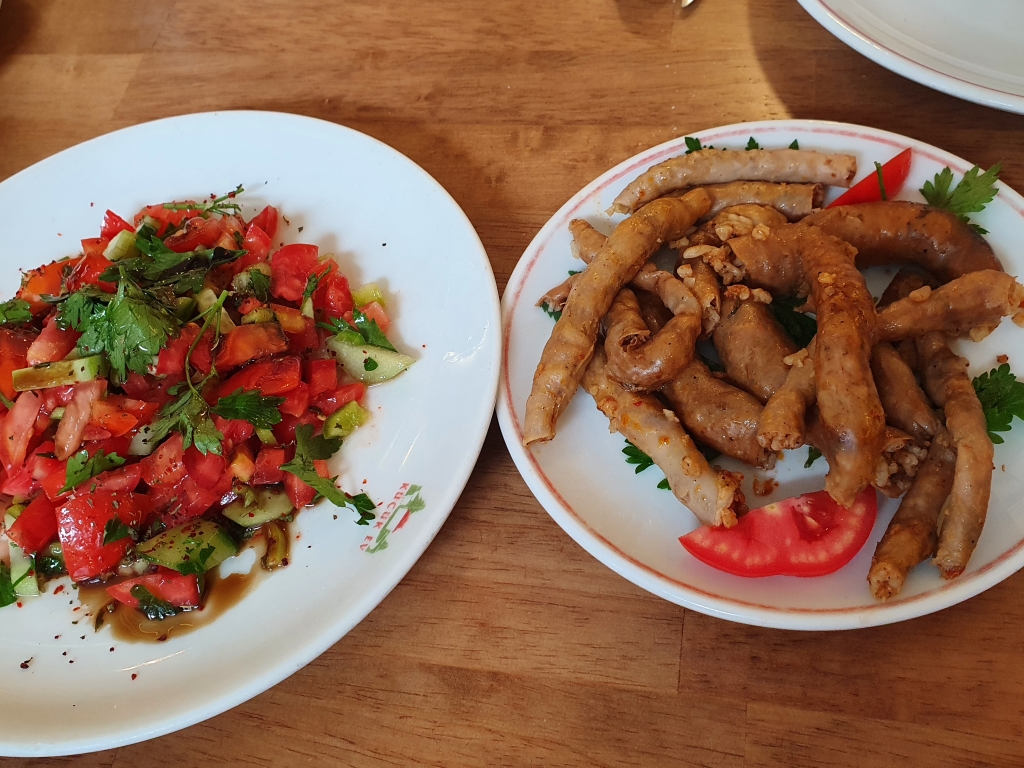 A short walk took us to the local Charsi (the market street), where we fell victim to countless colors, scents and other attacks on our senses. You can get an idea of the colors from the title photo. The aromas cannot be transmitted directly and I regret it because the variations of coffee with spices offered in the Hisir Han cafe smelled in a strange but very intriguing way. For example, of black cumin, though I don’t know if you should order it if you want clean teeth. 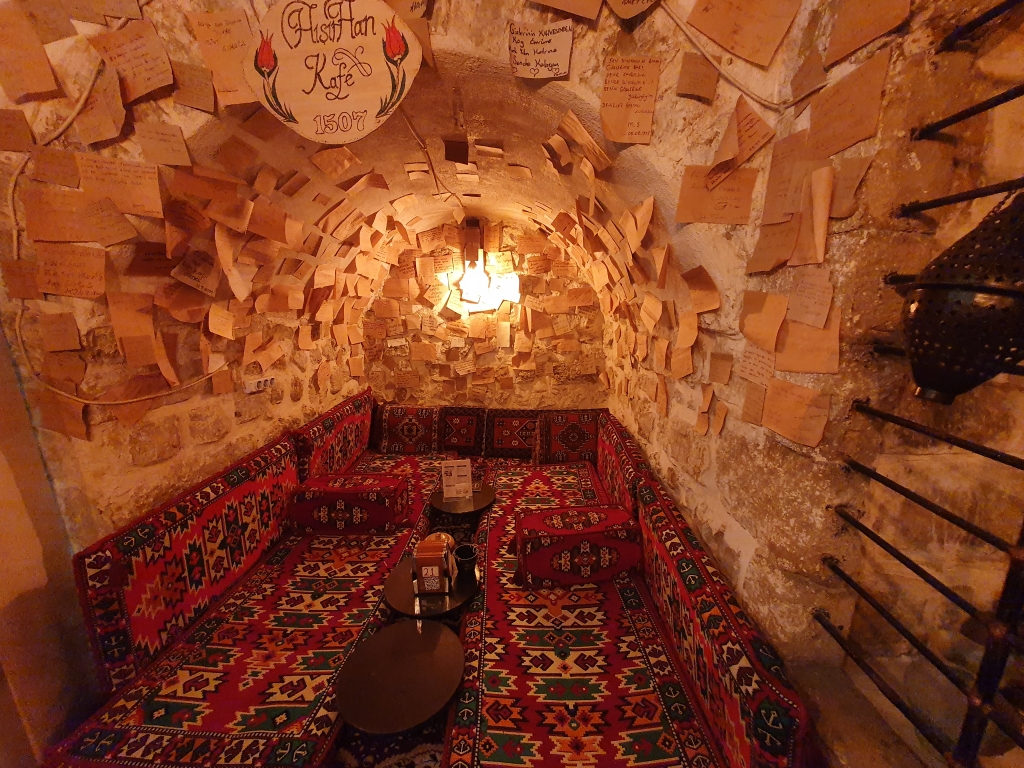 Small museums were hidden in the side streets of the market, in restored old houses. I suppose the whole neighborhood could be called ethnographic, including the workshops of the carpenters, the knife makers, the masters of Bikir (copper products) and baskets. Mixed with Tatli pastry shops, offering baklava, tolumbi and their cousins. But I was going to tell you about the museums in the beautiful old Marash houses. One was the local cuisine museum, the other was a perfectly restored old konak or administrative building. 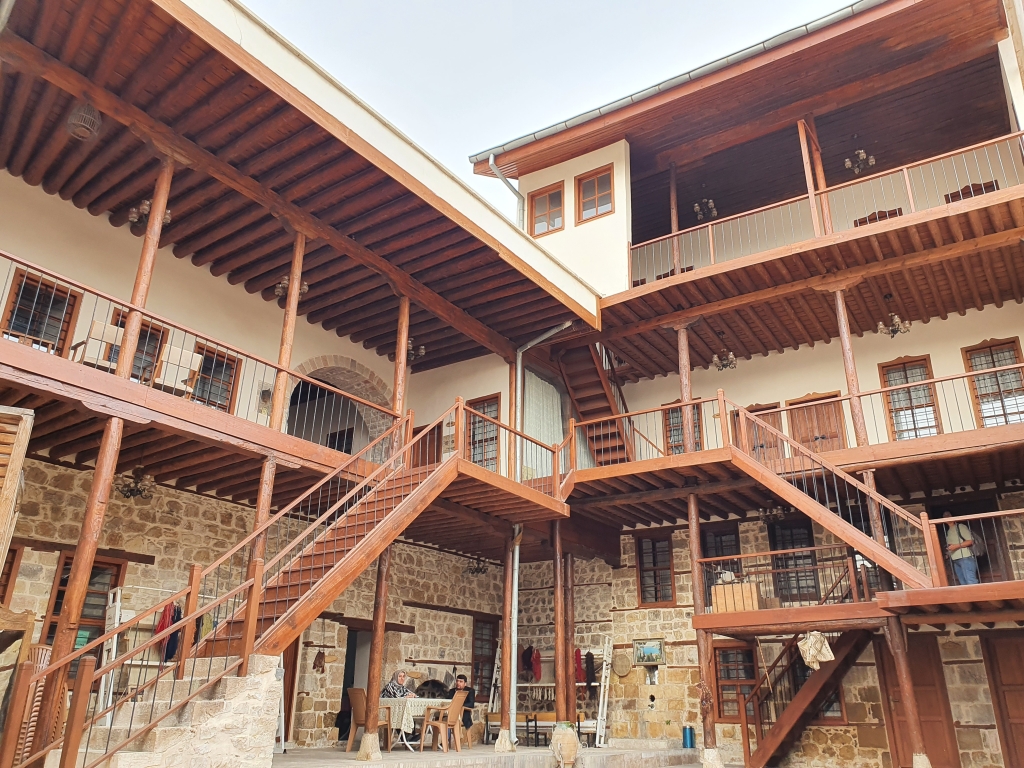 The Museum of Cultural Heritage was still being worked on, but the Museum of Dondurma was completely open. If you don’t know what dondurma is, this is the Turkish ice cream, and Marash is considered the capital of ice cream in Turkey. The special thing here is that the dondurma is made of goat’s milk and sweetened with salep, and they claim that it has been so for at least 100 years. The largest ice cream factory with the Mado brand is also located here. You can learn more at the museum, but I just can’t help showing you the goat’s face: 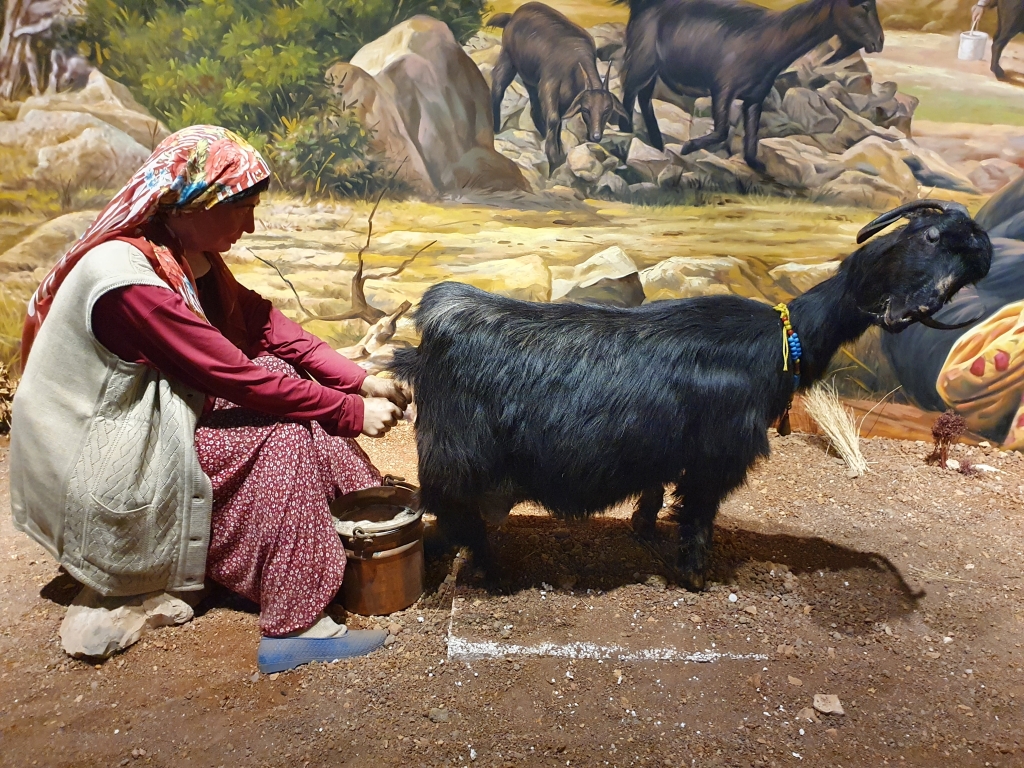 Enough of museums; we were on a gastronomy tour after all. In this regard, we diversified ethnography with short tasting sessions. As the route to each museum passed through the Charsi again, we could not help but taste the local cheese, dried fruits, nuts and a sujuk – which is not a bowel full of meat as any Bulgarian would expect but jelly grape juice full of nuts. Cultural differences. The Pide, on the other hand, was just a Pide as expected, though in a nice small bakery they made it with cheese and pistachio. 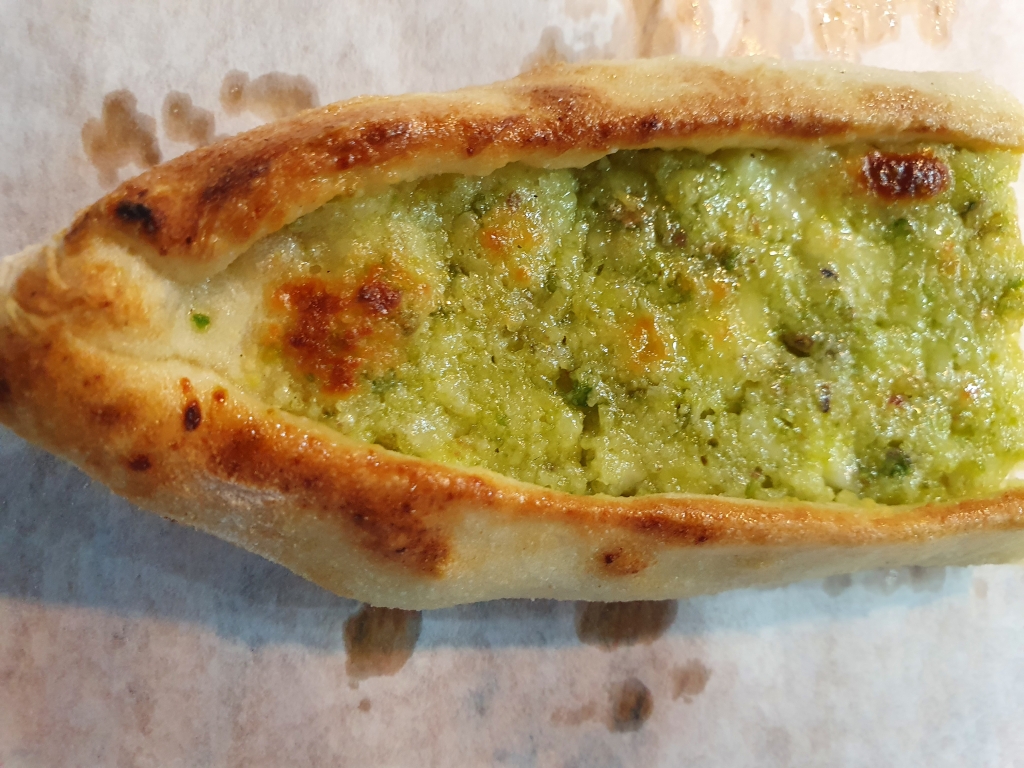 So while we were touring and tasting, time came for dinner. As is the tradition, we queued up with the locals to get some soup. In Marash (maybe elsewhere too), there are small diners with just a few tables, at the entrance of which there are huge stoves with giant pots of soup. The most common options are lentil soup and the so-called Kelle-pacha. It is made with the meat of boiled and unboned veal heads, with some add-ons. Pour on top a boiling decoction of Sumac – a local spice that gives a sour taste to the meals, and you get this: 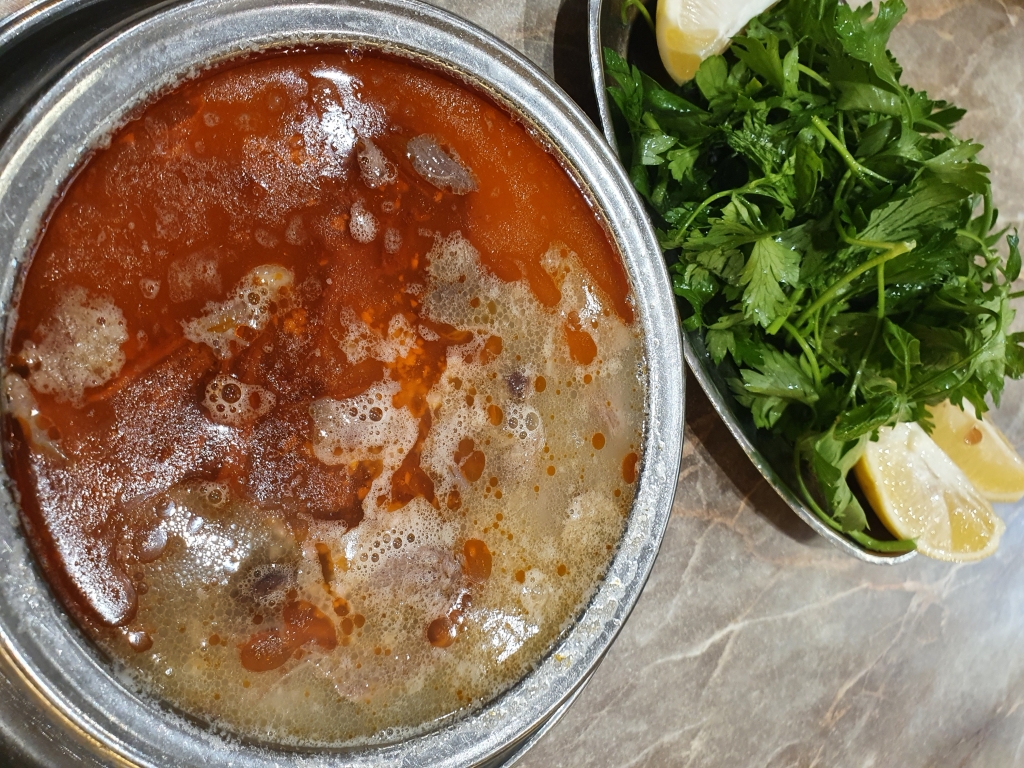 For breakfast on the next day, we went to eat Chorek – flat butter cookies, which are also typical of Marash. As I had seen similar once elsewhere, I asked Hulya what were they special about. She explained locals used clean, high quality butter and old recipes. The Choreks contained cumin and/or sesame, and appeared in a salty and sweet version. Of course, the best ones could be found in the oldest bakery of the Charsi. 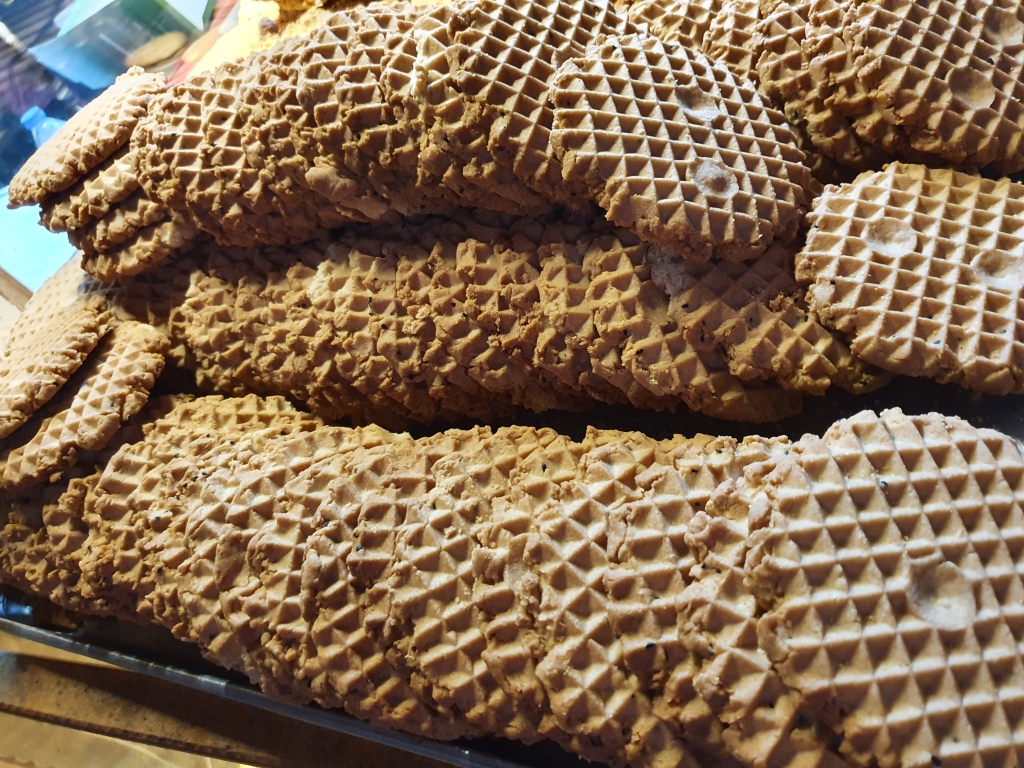 I will shorten a bit the rest of our stay in the pleasant Turkish city of Marash. After the Chorek, we tasted the notorious local Dondurma, which really had a special taste, and then decided it was time for lunch. We went to a butcher shop and we chose several types of meat products. The owner served us tea while taking our selection to the oven across the street, after which he arranged a table upstairs in the company of fresh bread and vegetables. Now, this is it, I can stand no longer; I’m leaving you and going to get a bite. 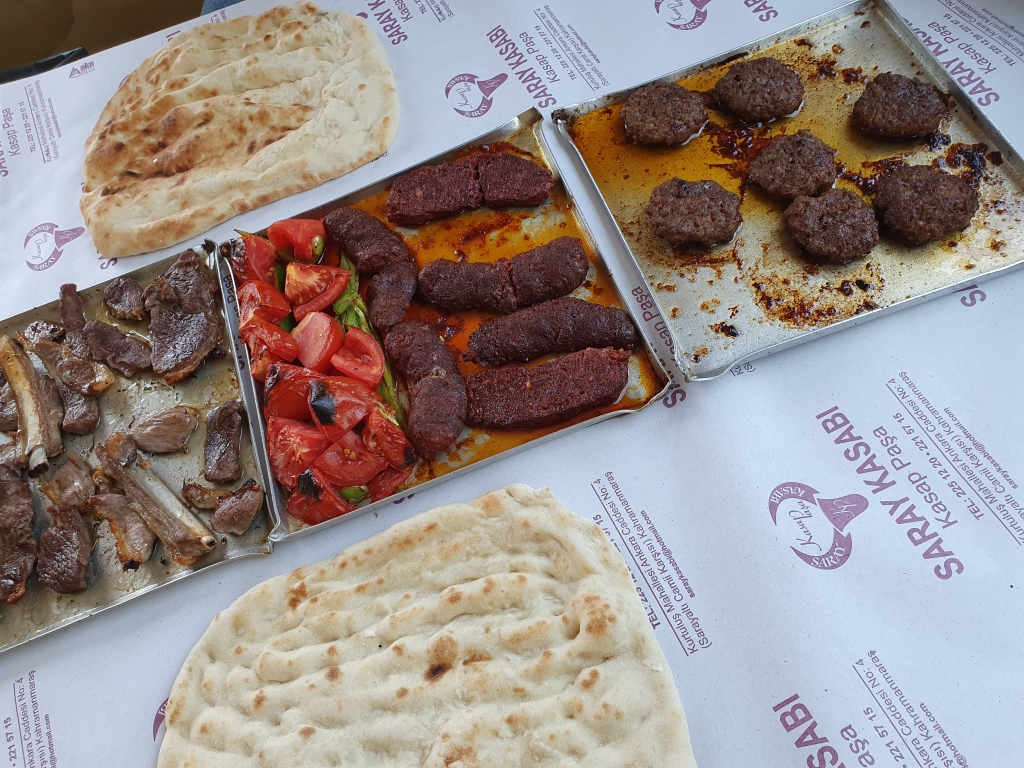