Ihlara – the Valley of Monks and Pigeons

Home/World/Ihlara – the Valley of Monks and Pigeons
Previous Next

Ihlara – the Valley of Monks and Pigeons

Ihlara, don’t be fooled by the writing, it is pronounced Uhlara, is one of the many valleys in the Land of Beautiful Wild Horses – Cappadocia, in the heart of Turkey. Over 16 kilometers long, visiting it is a challenge if you are an ‘unorganized’ tourist according to the official jargon of the tourism industry. Although it has always amazed me; I usually travel alone with my loved ones and I can tell you that the level of organization I dedicate to these trips, I don’t invest anywhere else. But let’s not get carried away – if you are a self-organized tourist, leaving your car at one end of the valley, a leisurely 16-kilometer walk in one direction and a quick 16-kilometer run back to the vehicle can be a problem. At one end is the Selime Monastery, which I told you about recently. I don’t know what’s in the other end, because I didn’t get there.

We entered somewhere in the middle – through the village of Belisirma. We walked around as much as we could, and returned to the cherished vehicle. The valley was fantastic at this time of year – Easter 2021. Perhaps the almost complete lockdown, which was announced in Turkey at the time, helped by resulting in an almost complete lack of tourists. We, the travelers, do not get mixed with them tourists, right? But we would have gone to the valley anyway, because it is very beautiful. Lush greenery against the backdrop of rocks carved by nature and Homo sapiens. It is hard to believe that the main work has been done by this modest river: 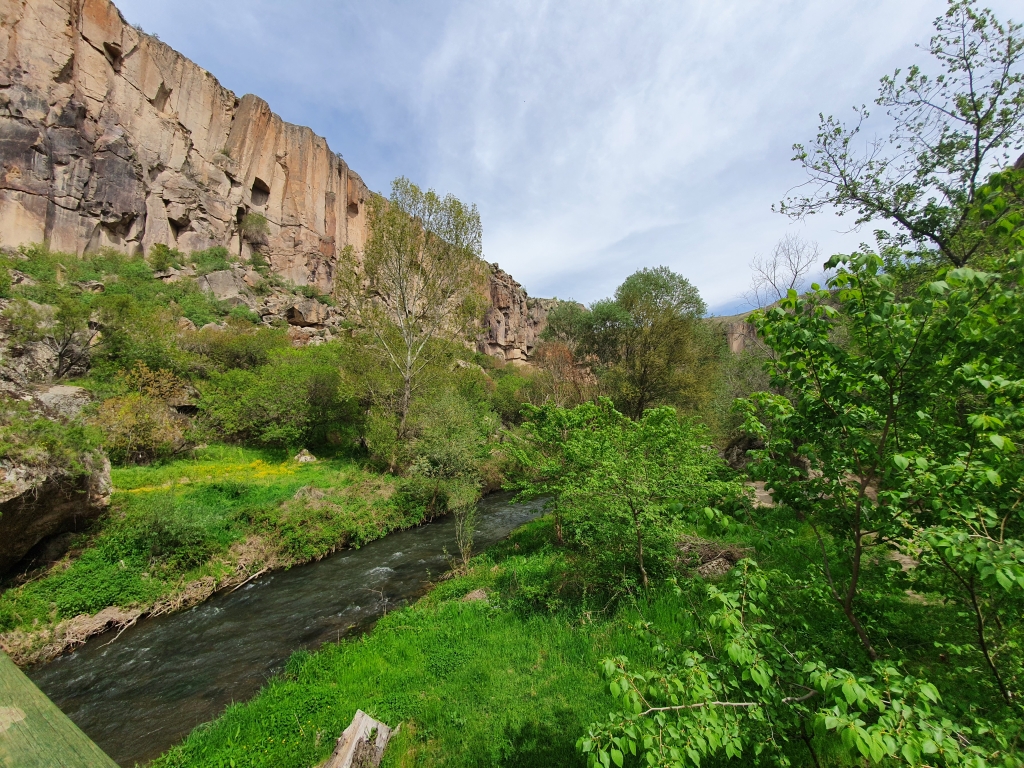 Some also call Ihlara “the valley of monasteries” because an amazing number of religious communities have indeed been active there. The monasteries have long been abandoned and the valley is left to the climate and tourists, whose joint efforts will one day see it to its end, but for now you can still find interesting things inside. The main ones are mostly the rock churches, and the access is allowed only in some of them, for safety reasons. And almost all of them are high up in the rocks, so the day passes in a lot of change of altitude. Entering from Belisirma, the first church you will find is called Kirkdalmati. I personally did not find an explanation for the name. 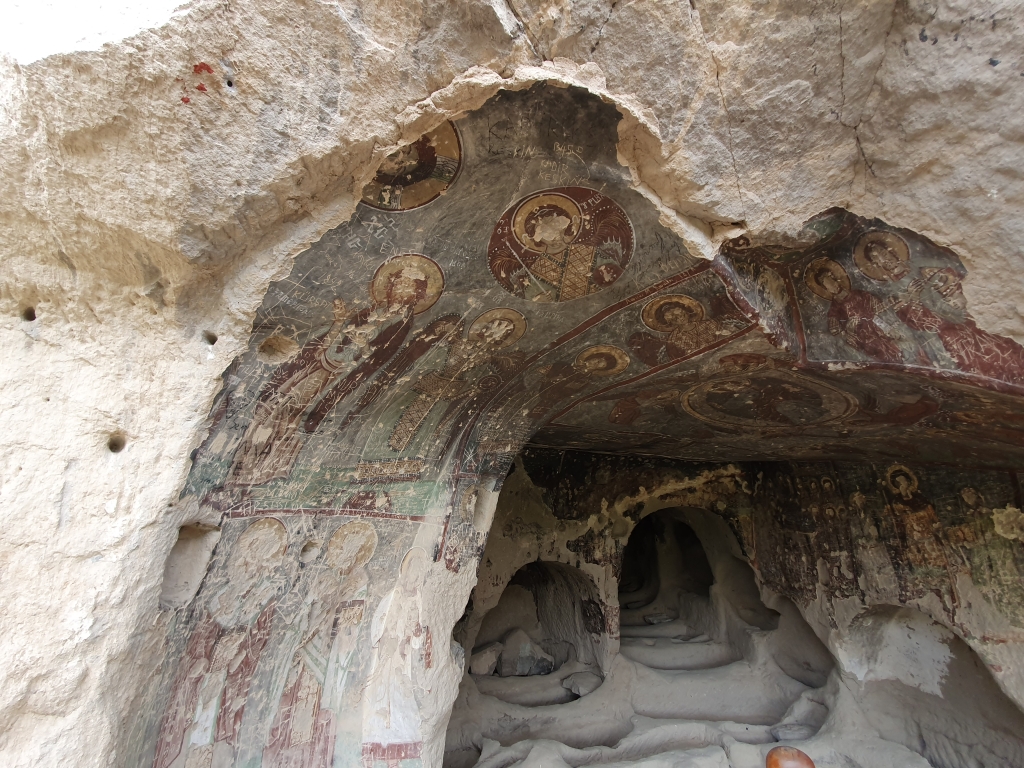 The church is said to have been a gift from Queen Tamara, the same Georgian ruler of the late 12th and early 13th centuries whose personality is shrouded in legend. The allegations go so far that she herself was buried somewhere around, although there is no evidence of this. Why the church does not bear the name of St. George is a mystery, given that the most famous mural is associated with that particular saint, and the connection with Tamara’s father, King George III, would be obvious. The mural is quite damaged, but with some effort, you can see the dragon, which is to be ingloriously killed by the hero, riding his typical white horse. 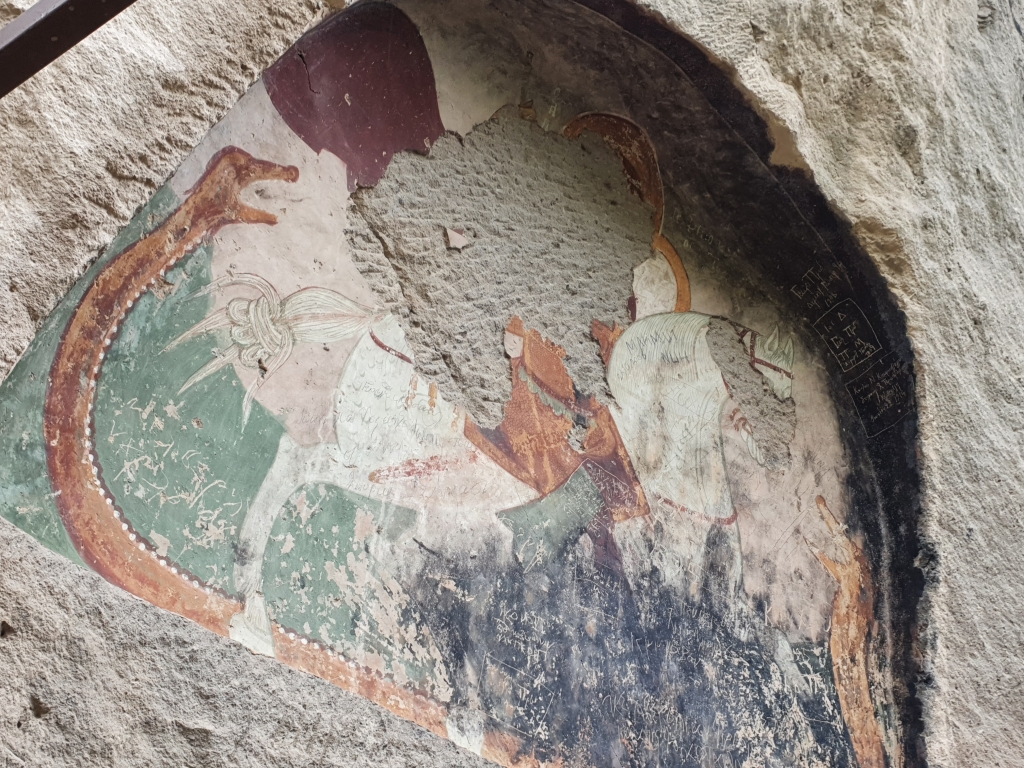 The next church – Yilanli or the Snake Church has a completely different color palette from Kirkdalmati. Which, by the way, is typical for the whole Ihlara valley. Here we are given an explanation of the name, although it evokes mixed feelings in me. The name is associated with a specific mural that is inaccessible and I can’t show it to you but there snakes punish the sinful women (!!!) One is bitten by eight snakes all over her body because she abandoned her children. The second is bitten on the breast because she did not breastfeed her children. The third gets bitten by her tongue for gossiping, and the fourth – by her ears because she was disobedient. Those monks had a very distorted view of the world! 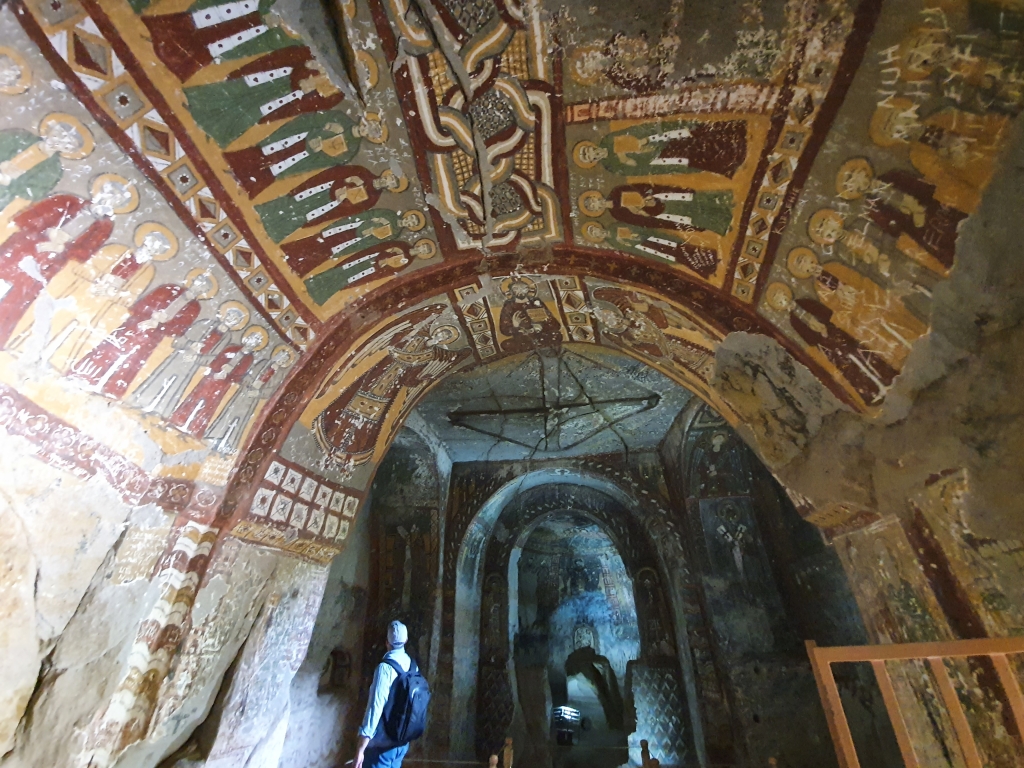 At the Church of the Hyacinths (Zumbullu Church) some monastic premises are still preserved, although in the apparent absence of hyacinths. The decoration here is iconoclastic, without images of people, and quite simple. You can go up to the second floor above the church and exit on the spacious terrace. There is no other like it left in Ihlara. You can also walk inside the still preserved rooms with remnants of decorations, smoky ceilings and holes in the floor to the lower layers, which may have served for air circulation, or may have been used for direct communication.

The colors change again dramatically in the next two churches. They have the strange names of Kokar and Agakalti or the Daniel Pantonassa Church. Again, I was unable to establish the origin or meaning of the names. The first is miniature and quite damaged by time. The interior of the second one looks extremely fresh with light tones very different from the medieval practices we are used to. There are two periods in painting – earlier with geometric and natural motifs (iconoclastic) and later with images of saints. 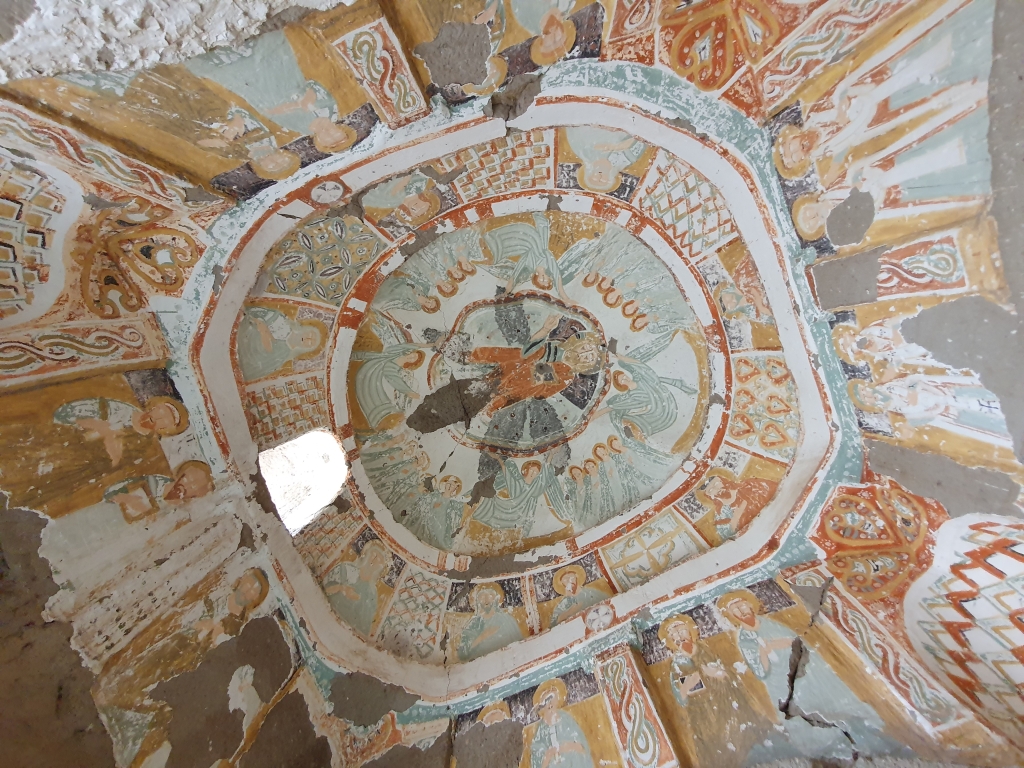 One of the last churches open to visitors in the Ihlara Valley is the Dark Castle. For some reason, the builders (or should I say “sculptors”) have decided not to design any light source inside. They may have used the famous linseed oil lamps, or they may have specifically wanted to pray in the dark. In support of the second hypothesis is the complete lack of murals. There is decoration, but it is scarce and mostly carved. I found that people react quite differently to the Dark Church. Some find it a little depressing. 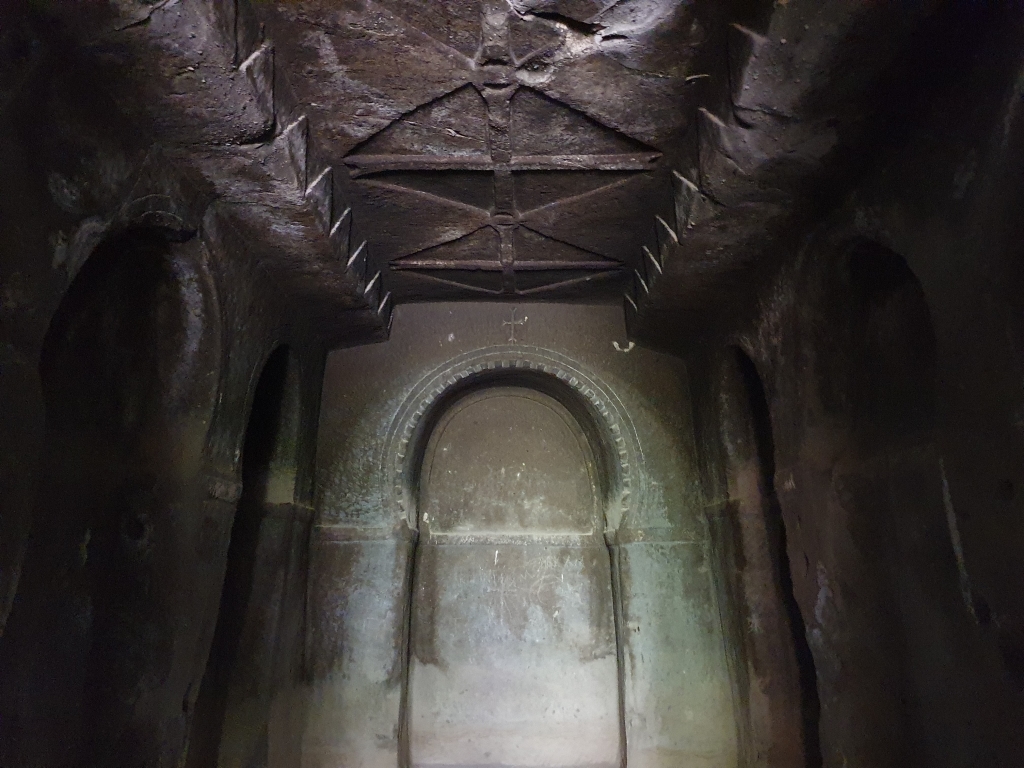 Speaking of linseed oil, on the other side of Belisirma you will find the remains of a monastery that specialized in its production. Next to the monastery church called Alachurch is the so-called “Bezirhane” – a domed room carved into the rocks, which we can safely define as an oil mill. We see the huge wooden screw that rotated the oil press, as well as the pool carved below to collect the produce. It is obvious that in the period between the 9th and 12th centuries – the period of the establishment of the monasteries in the Ihlara Valley, linseed oil was quite important for the inhabitants. 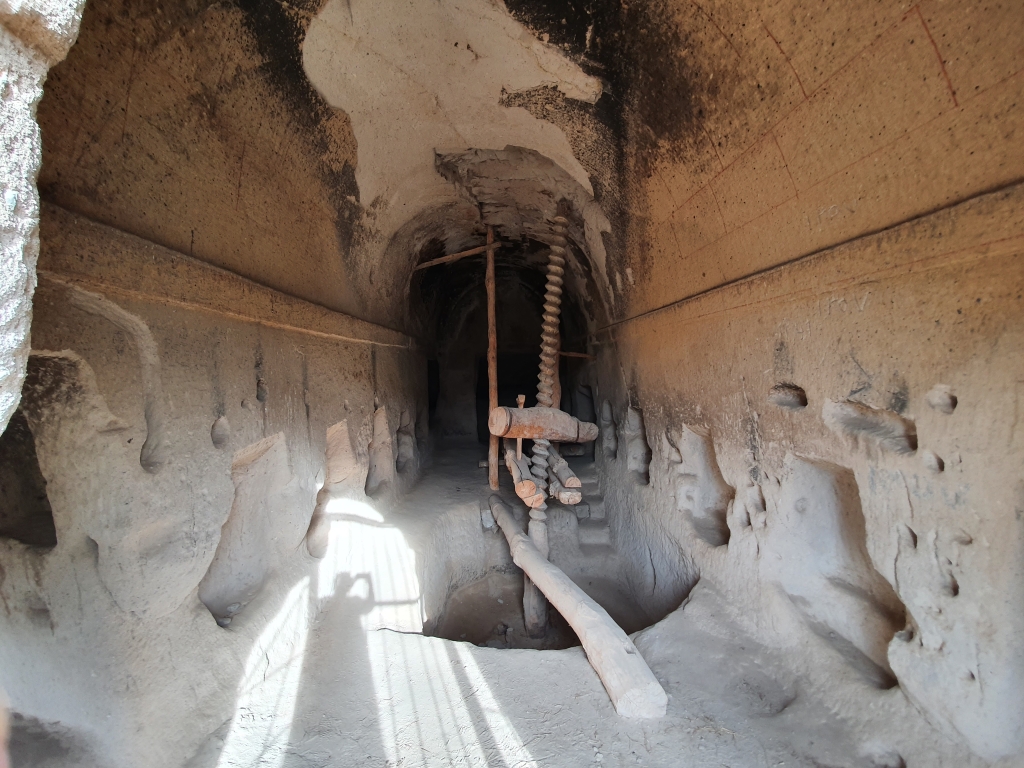 The other important thing were obviously the pigeons. We can’t miss them. I have already mentioned that what is left of the inhabitants are the churches, a necropolis here and there and other unidentified monastic premises. And the dovecotes. You will find them everywhere in Cappadocia, there is even a whole valley called the Valley of the Pigeons. Wherever you look, you will come across rows and columns of small niches in the rocks, sometimes triangular, sometimes square or indefinite in shape, at a height that excludes the functions of kitchen furniture or a closet. According to some, these were the local post offices. You can develop your own theories. 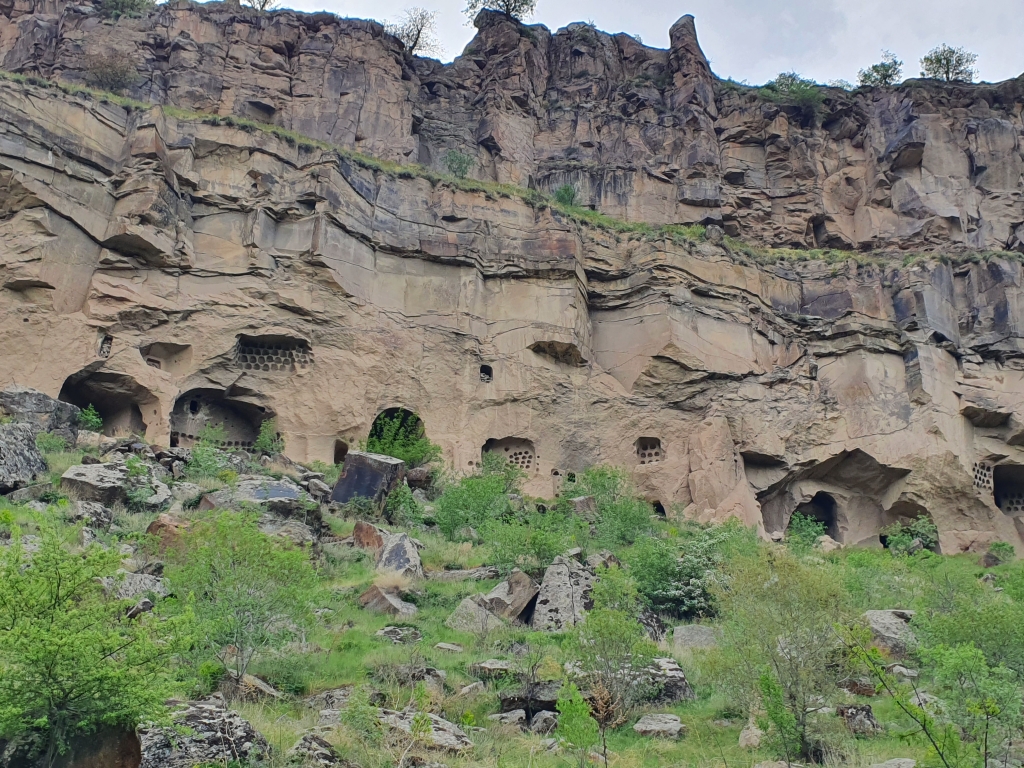