At the Vratsa Museum

At the Vratsa Museum

As usual, there is more than one museum here. We begin our discovery mission with the Central Building of the Vratsa Museum (Regional History Museum, to be more precise). Where will you find the Central Building in question? Well in the city center, where else! Spacious, open and white center with fountains, with a monument to the famous Bulgarian revolutionary and poet Hristo Botev and a fantastic background, provided by the Vratsa Balkans, as if specially arranged as a setting for a movie. Part of the special decor, is the Kurtpashova medieval tower, which the Vratsa Museum seems to have deliberately managed to put in front of the entrance to attract attention. See the photo above if you don’t believe it. 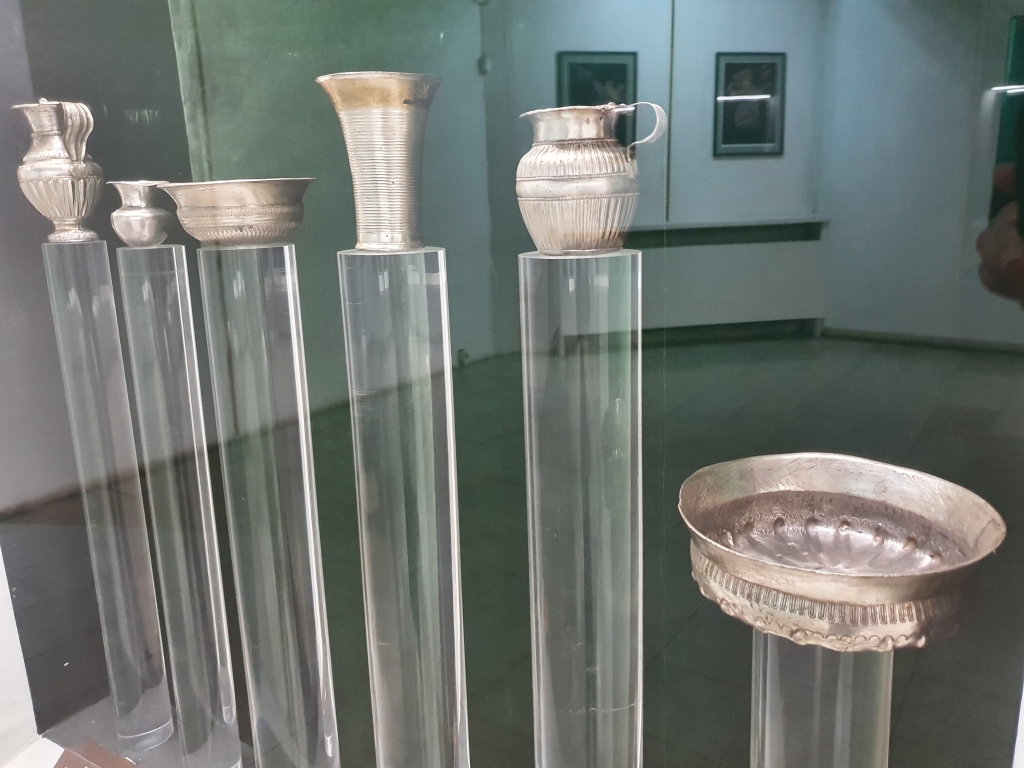 Inside the museum, the attention is attracted mostly by the Rogozen treasure, to which a whole hall is dedicated. Unique, wonderful, breathtaking and enchanting – no matter what epithets you use, you will not go wrong. I have not posted pictures of it, I urge you to go and see for yourself. Instead, I offer photos from the other hall with “Thracian Treasures”, which are much more modest (the treasures, not the photos), but should not be missed. Here is the treasure from Mysia from the 4th century BC in the photo above, and the treasure from the Mogilanska mound, from the same period: 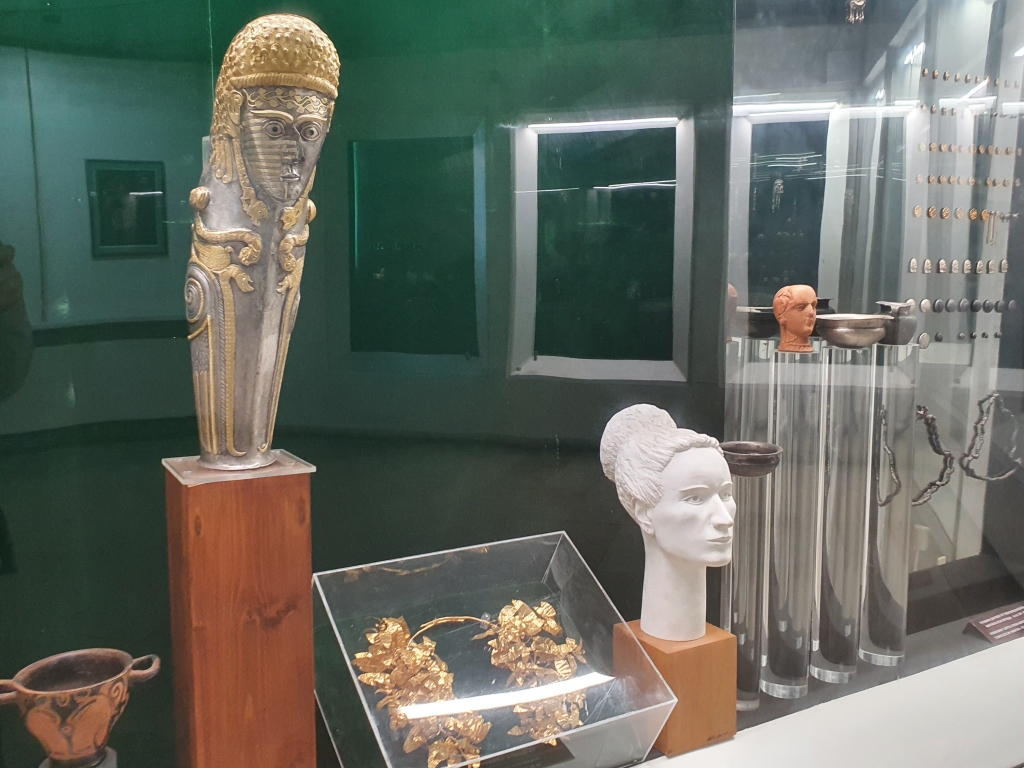 If you are wondering what the silver and gold statue on the left in the photo really is, let me tell you that it is not a statue at all, but a Thracian knee protector. Can you imagine going into battle and your opponent’s knees looking at you like that ?! The truth is that lately I have been leading virtual tours around Bulgaria for international platforms and people across the oceans – but what am I saying, even on the Island, which is Western Europe, have not heard of this civilization. I feel so much like sending them this knee protector to look at them for a while. But let’s go back to the Regional Vratsa Museum. And a little back in time. 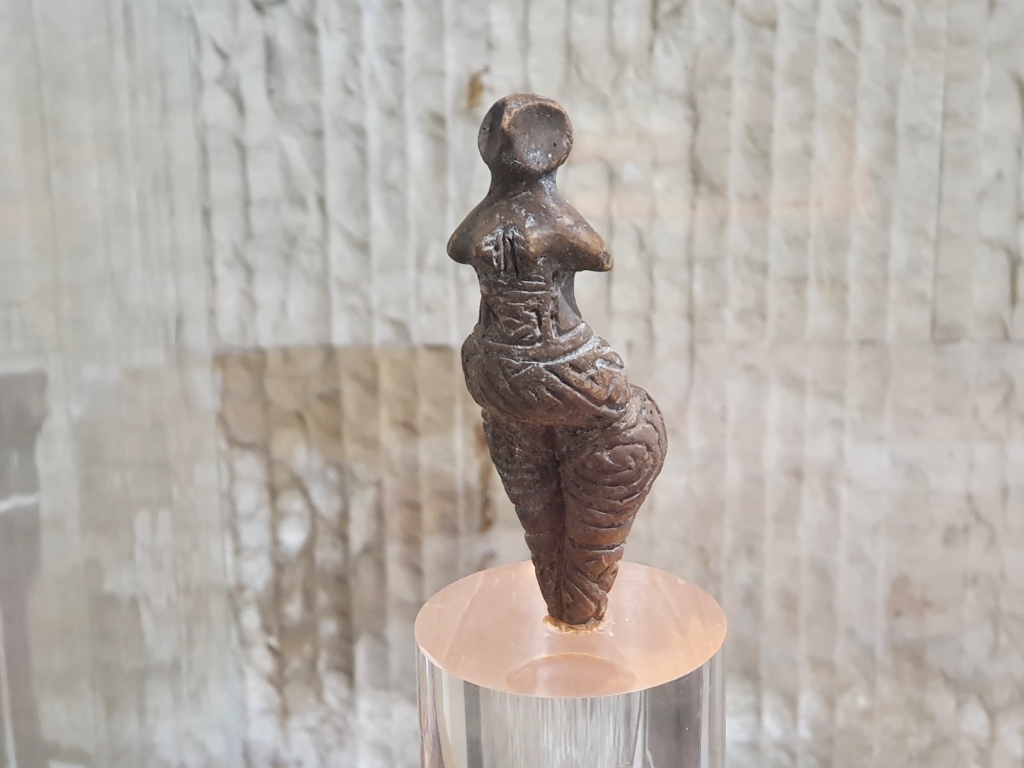 How are your standards for female beauty? Some 6-7 millennia ago, they seem to have thought differently, what do you think? Some experts say that the female figurines, many of which are found in prehistoric sites, are exaggerated in view of their ritual purpose. The mother goddess, the desire for fertility and things like that. However, others are convinced that the ancient sculptors must have worked with a live model. Unfortunately, the selfies of this period are lost and we will probably never know. I’m not complaining. I feel damn good in the company of my sisters ​​with shapes that are out of fashion today. 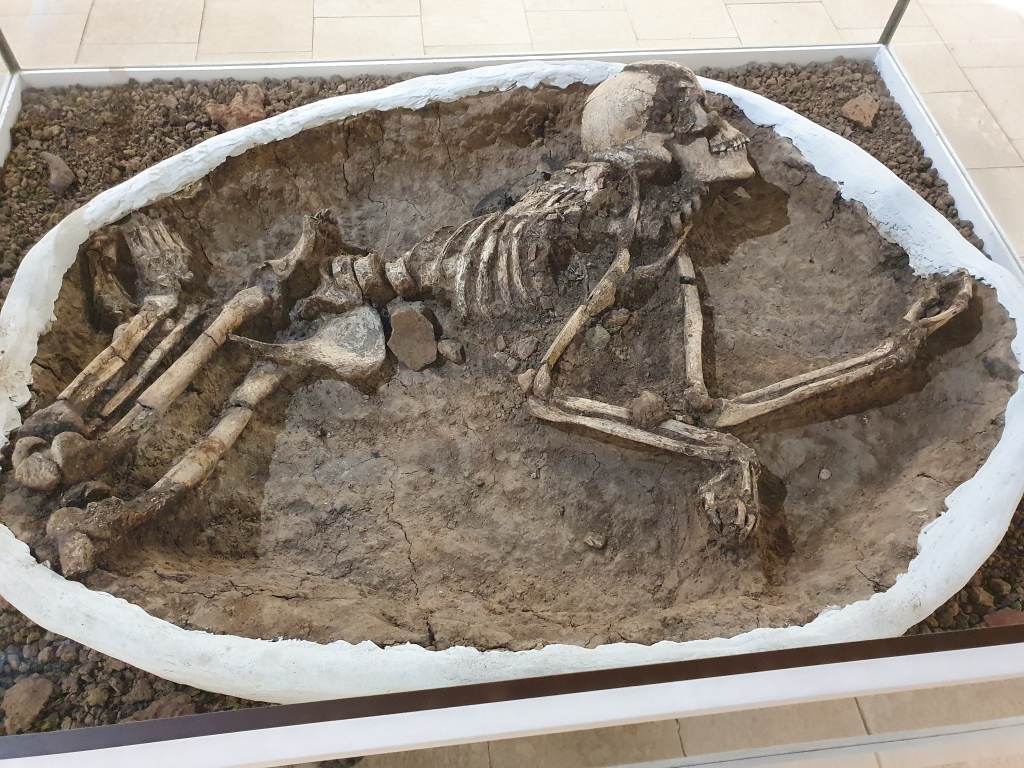 Here is a real sister who really lived, although about 8,000 years ago. This one is special because it has a name. Archaeologists named her Todorka when they found her during excavations of the Neolithic settlement near the present-day village of Ohoden in the municipality of Vratsa. Then they named the whole Festival of Ancient Cultures after her. The festival “Sun of Todorka” has been already held, if I’m not mistaken, six times at the Neolithic site and is definitely worth a visit. They will teach you to harvest spelt and then make flour and bread from it, to make pottery without a potter’s wheel, and if you are a fan, they will invite you to “get in the shoes” of an archaeologist, and you may even discover something!

And here is this tile at the honorable age of 5 thousand years BC. I discovered it only during my last visit to the Vratsa Museum. I didn’t understand what it was for, in fact no one might know. But experts believe that this is the earliest proto-writing in our part of the world. Or not only in ours? You can ask in person when you visit the museum. And while you’re there, be sure to ask them to unlock the special room for you. It is special and locked because it maintains a peculiar micro-climate. This is to preserve the exhibits inside. And they need to be preserved, because they are … made of paper! If you see them just like that, you won’t believe it, here – 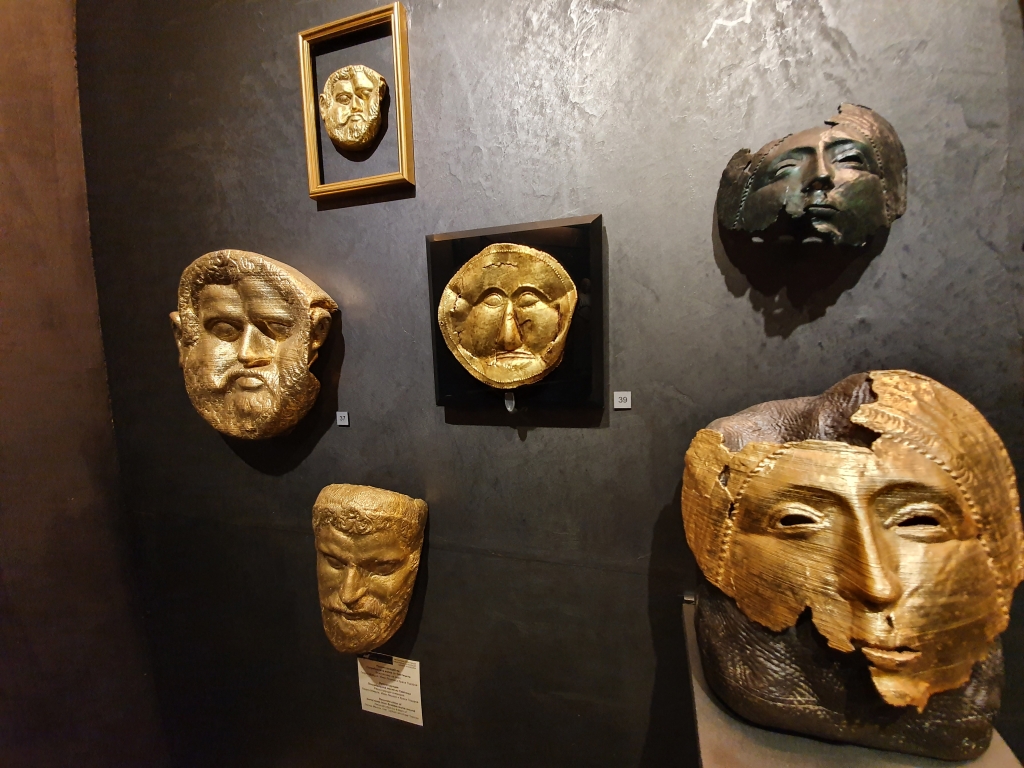 And for dessert, see the new hall called “First Atomic”. It is dedicated – of course – to the first nuclear power plant in Bulgaria, Kozloduy. You can learn many curious things that you would not otherwise pay attention to. Take a walk in the rest of the regional Vratsa Museum. There you will find more amazing archeology, the halls of Hristo Botev and the local history of the Ottoman period, a lapidarium, maybe a temporary or visiting exhibition. If you run out if time, come again. 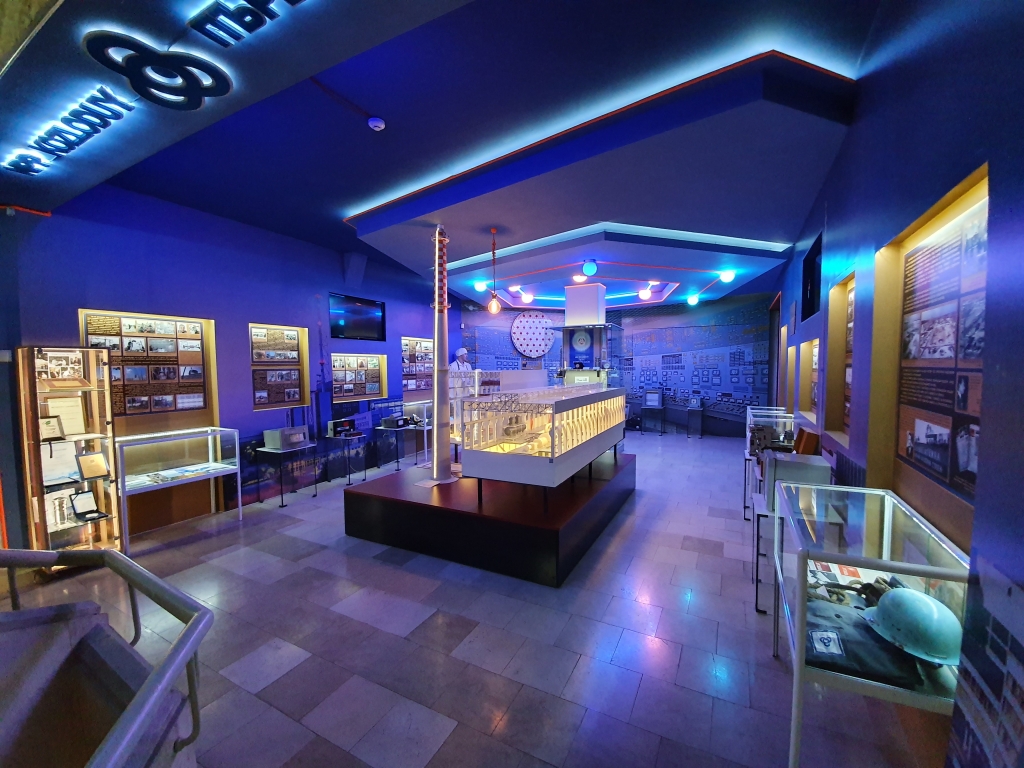 And while you’re still in Northwest Bulgaria, you may also visit the Vidin Museum.