Vila Nova de Cerveira – the village of the Portugese Stag

Vila Nova de Cerveira – the village of the Portugese Stag

In fact, if we have to be honest, there is absolutely no evidence whether the stag was Portuguese or Spanish. The facts are as follows: 1. The New Village of the Stag, as we must translate Vila Nova de Cerveira, lives happily on the banks of the Minho River, which here plays the role of a border between Portugal and Spain. 2. Only one bridge over the river in question separates our Vila from the opposite Tominho and the free crossing can only be disturbed by COVID-blockades. 3. In the past, there were many deer and they lived freely on both sides of the river. In this part, Minho is wide, so we don’t know if and how the two groups communicated with each other.

There is a whole legend about Cervo, or the Stag King. In short, the gods allowed him to settle here and reign over his fellow deer. In time, however, most died and the old king was left alone. When the founders of present-day Portugal arrived, he had to fight them. Here, too, the versions differ as to who defeated whom. If you climb the hills above the town (despite its name, Vila Nova de Cerveira is not a village), you will find the majestic Cervo, carved out of metal, who watches over its modern possessions, looking at where the Minho flows into the ocean. Here is what he sees: 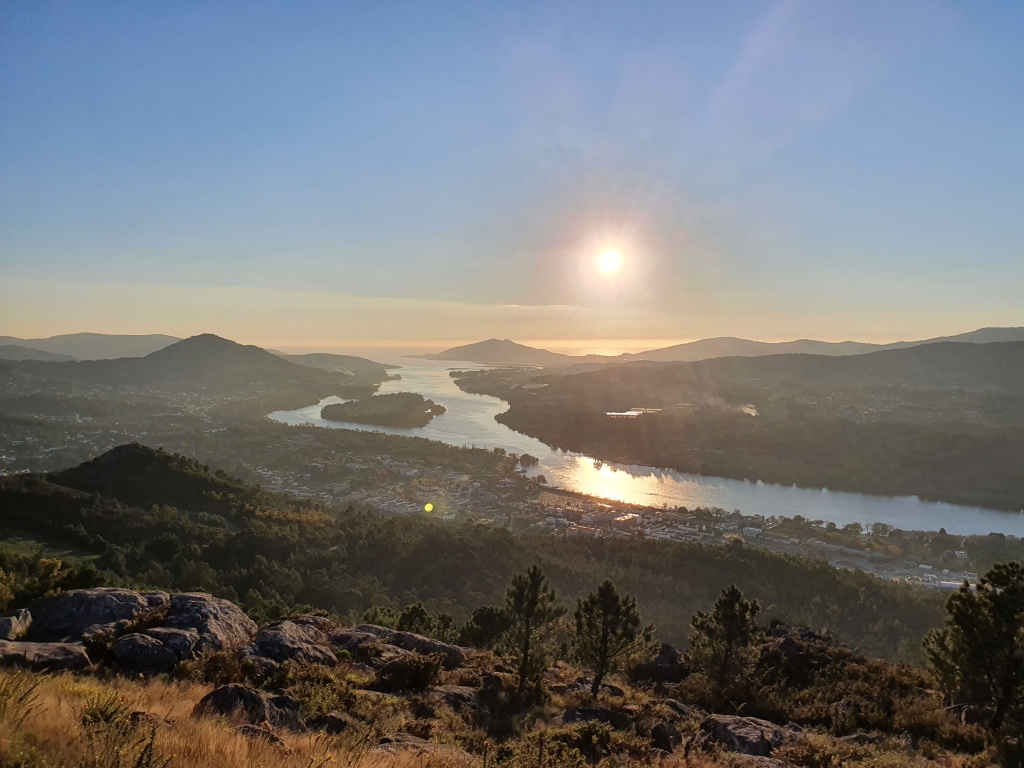 Speaking of the ocean, we asked the locals where they go for sunbathing and swimming. It turned out that they went south because the ocean here felt cold even in the hottest summer months. The nearest beach for walking turned out to be half an hour’s drive south, in Viana do Castello – also a small town located at the mouth of another important river, Lima. At the end of October, the sea water temperature was around 20 degrees Celsius, which residents of the Baltic republics would probably describe as a pleasant coolness. The smell of air soaked in sea salt and the view of the shore and the waves are fortunately satisfying in all seasons. 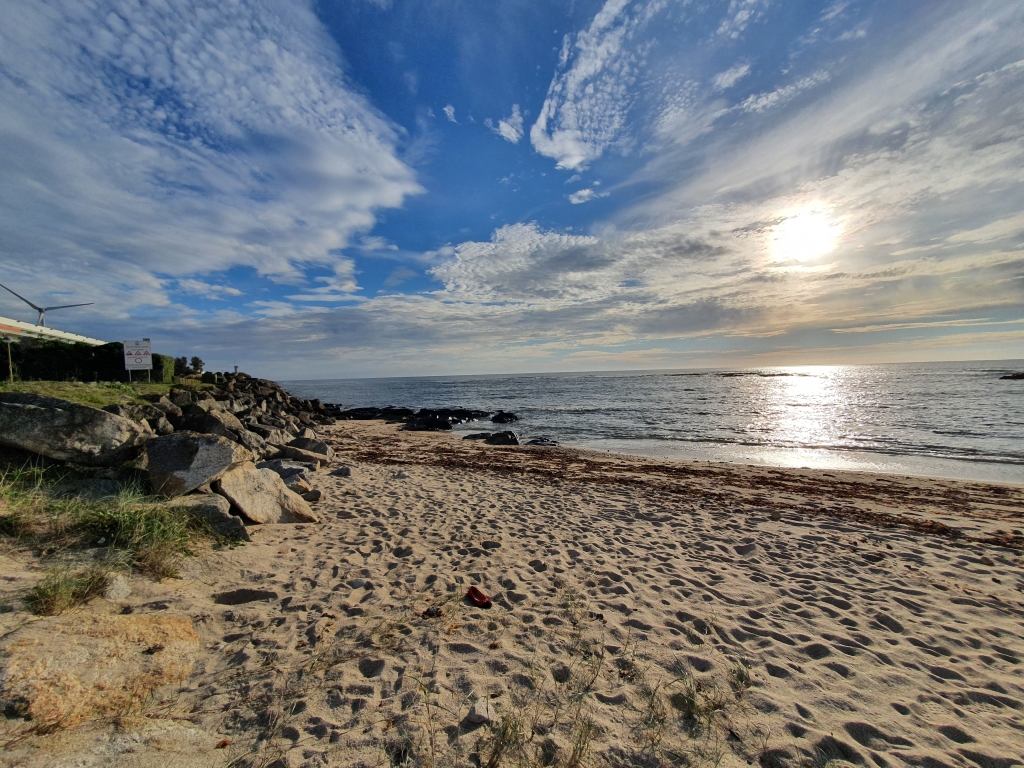 But back to Vila Nova de Cerveira. Leaving aside the romantic legends associated with the local fauna, the story goes that the city was founded in the early 14th century by the then Portuguese king. From that time is the fortress (Castello), part of an ancient Portuguese-Spanish tradition, which at first glance may seem a little puzzling. Throughout the Minho there are such pairs of towns or villages as our Vila and Tominho, located opposite each other on both shores. Today, they are implementing cross-border cooperation projects, but in the past they fought regularly and built mirror fortresses. I asked the local guide why the bridges across the river then, to which I got the answer: “For the times when they were not fighting”.

The entrance to the fortress is also unusual. It is through a tunnel on the first floor of the older fortress church. The greater part of the church is on the second floor, with the balcony you see in the picture above. You would think – just someone’s rich house, if it weren’t for the cross on top. And the access to the prayer hall is via a stone staircase attached to the back of the building. The interior was something new for me, because in my imagination the decoration of walls with faience tiles happened only in bathrooms. It had happened here in a prayer hall. Admittedly, the effect is quite interesting. 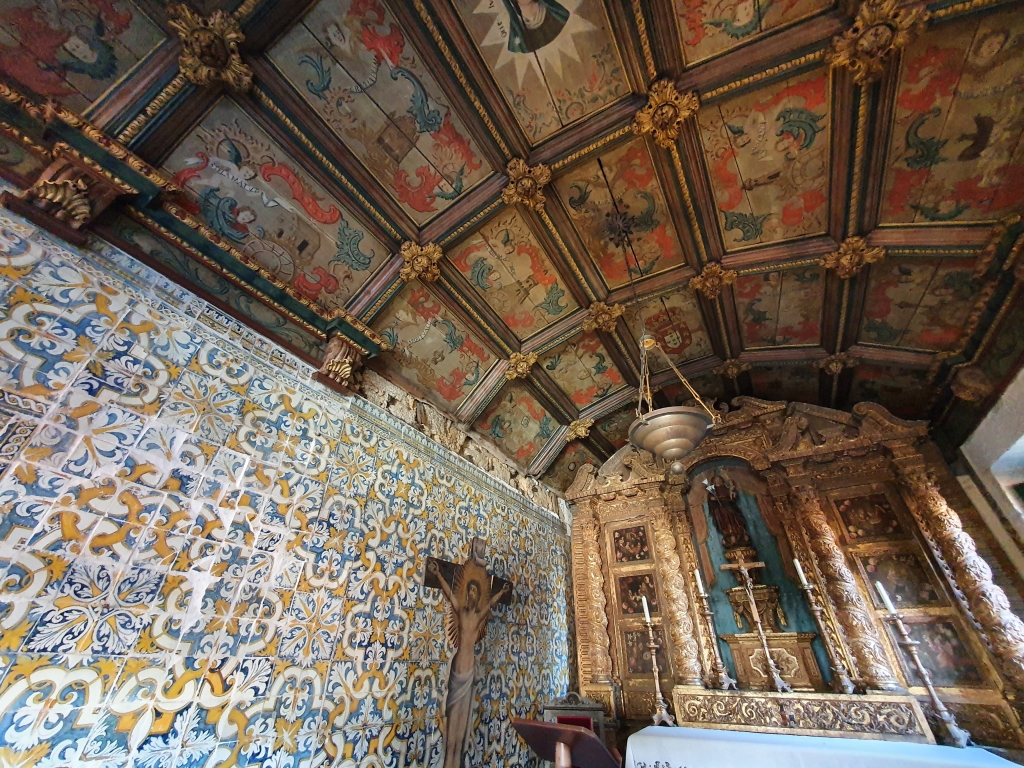 Prior to COVID, the interior of the fortress of Vila Nova de Cerveira contained a hotel and two restaurants, all of which are currently closed. On the other hand, it is quiet and pleasant inside. You can walk along the fortress wall and take pictures of the river and the Spanish side across. You can also enter the second fortress church, which is – intentionally or not – glued to the old building of the Municipality. And right in front of the second one is the pillar of shame, which used to be something common in older times. The court hearings were held in the building of the Municipality. The slightly guilty defendants were tied to a pole of shame, presumably to reflect on the offense. There was another procedure for serious crimes outside the city.

Leaving the fortress, we return to the main square of the town, which is full of old architecture, cozy cafes, a central monument and another church. On market days (Saturday) – with lots of people as well. My attention was drawn to the municipal library building, which is quite modern inside, ergonomic and full of equipment, but outside is the old residence of the 18th century local Castro family, or Solar dos Castros. Not bad for a residence, what do you think?

Finally, it is appropriate to say how they feed guests at Vila Nova de Cerveira. If you think that the notorious Tapas can only be eaten in Spain, you are wrong. Here they have a Portuguese version of the famous appetizers, which also combines seafood, meat and meatless ingredients. I was captivated by the fish patties and stewed giblets. Pumpkin cream soup is a tradition for dinner, and if you haven’t tried Bacalao, I recommend it by all means – as long as, of course, you eat fish. Christmas is on the horizon, then is the traditional time to prepare this dish of cod, onion sauce and potatoes. The wine from the whole region is excellent – both white and red. And for desserts – the famous Natas, stuffed with orange and lemon cream – and I’ll stop there.