Have you been to Prespa?

Home/Friends/Have you been to Prespa?
Previous Next

Have you been to Prespa?

Here I sit, at a table by the swimming pool, sipping Greek coffee and having a pleasant chat with my new friend, Stratos. He is the owner, together with his brother, of the Prespa Resort & Spa Complex on the banks of Lake Prespa. Freshness is flowing rom both the pool and the hill that backs the complex. I cannot see the lake from here but I can feel its cool breath too. Stratos is kindly telling me his story which is intricately linked to his homeplace and the surrounding areas. To him, this is the place where, nature, history, culture, people, legends, traditions, fairies and elves come together. Me: So you’re not actually from here?

Stratos: Actually, I am. My family is from the Village of the Storks, Strkvo, that’s the old name of the Platy Village. This name seems to be related to the fact that, as you can see right next to our hotels, there is the tallest stork nest in Europe at 900m above sea level. However, I was born in 1955 in the town of Kavadarci in North Macedonia, where my parents had been political refugees since 1949 after the civil war. We were one of the few lucky ones, to be able to return to our homeland when I was just one year old. Me: What was it like to grow up here?

Stratos: Hard to explain it to someone from the outside. There’s the freedom of open water and all the games boys can come up with, especially in summer. On the other hand, there’s tons of farmwork that engages the whole family – especially in summer. But it was a good childhood, and it left me with a strong bond to this land and the whole area. A bond that I came back to after spending more than 20 years elsewhere.

Stratos: In 1974 I went to Thessaloniki to study and I settled there permanently since 1979. I have studied Finance, Business Administration, Computer Programming and Teaching. Between 1981 and 2000, I worked as high-ranking bank Executive, and between 2000 and 2004 – as a General Manager for a group of companies including the well-known in Bulgaria “Spetema Kafe”. I have also been maintaining, since 1983, the Office of Business Consultants and Accounting Services in Thessaloniki in parallel with my other activities. Me: But where do Prespa and tourism blend in?

Stratos: I never broke the close emotional ties that I have with my special homeland, Prespa. It was in year 2000 that my brother and I laid the foundations of this complex in the place of our father’s house. We named it Villa PLATYthea (a pun with the village name and the view – Thea in Greek – to the lakes of Prespa). We wanted to share with others the beauty of the area and the emotion one develops here. The new hotel unit with the brand Prespa Resort came in 2008. We are quite proud of it as it is considered one of the most complete units in terms of services offered, in the whole region. It has 16 rooms and apartments, reception room-lobby bar-breakfast, conference room with a capacity of 80 people, fully equipped gym, outdoor swimming pool, pool bar, indoor heated pool, fitness center, SPA center (sauna, hammam, jacuzzi), open Basket and Volley ball court.

Me: And are good services enough for good tourism?

Stratos: Absolutely not, they are the good basis for it. Then comes the hard work of marketing. I have been working to promote not only our complex but the Prespa area as a whole – as a tourist destination for all seasons. And not only in Greece. I participated in various International Fairs such as Düsseldorf, Brussels, Utrecht, etc. At the same time, I organize tours with visits to the sights of the area with 4×4 off-road vehicles, but also motorcycle trips.

Me: Describe the best assets of the area, why should someone come to visit?

Stratos: Before I tell you why anyone should visit Prespa, I would like to give you some basic information about the area. You are now in the Prespa basin, with the two homonymous lakes, Mikri (Small) and Megali (Large) Prespa. Today it is divided between three countries: Greece, North Macedonia and Albania. This is, first and most of all, a unique wetland, designated by the Ramsar Convention as a Wetland of International Importance and a Greek National Park with several NATURA 2000 sites. Prespa hosts about 260 bird species with our landmark – the pelican, 21 reptile and 11 amphibian species, 45 species of mammals, with the brown bear as the “big name”, but also the gray wolf, red fox, European badger, roe deer, Balkan chamois, stone marten, wild boar, and – can you imagine – 45 different species of bats! Not to mention the waters of the lakes themselves which are full of life. And around – there are about 1,400 species and subspecies of plants which form the beautiful landscapes. But that is not all, we enjoy also the traces of human civilization, with many monuments of the Byzantine era the most important of which is the Basilica of St. Achilles, supposedly built by the Bulgarian Tsar Samuil, the ruins of which are still preserved on the island of the same name. The bones of Samuil and two other Bulgarian rulers were found in the tombs of the island. In the village of Agios Germanos is the church of the same name from the 10th century, where the patriarch of Constantinople Germanos is buried. On the remote shores of Megali Prespa, there are the hermitages of the monks and the famous rock paintings from the 12th to the 14th century. I’ll stop here. Now, why should someone come to visit? To admire the beautiful peaceful environment of the region. To walk the 700 m. of floating footbridge connecting the island of Agios Achilleios to the mainland for about 20 years. To go boating to the medieval hermitages I mentioned. To attend a local festival with traditional music and songs in any of the villages dedicated to their patron saints, and try local delicacies such as famous Prespa beans, fish of the lakes, etc. To watch birds or engage in outdoor activities, such as walking on international trails, mountaineering, climbing, paragliding, outdoor games, canoeing, kayaking, mountain biking, etc. To take a forest drive in 4×4 cars or a part in the PRESPATHLON (a triathlon races of swimming, cycling and running). To touch history. 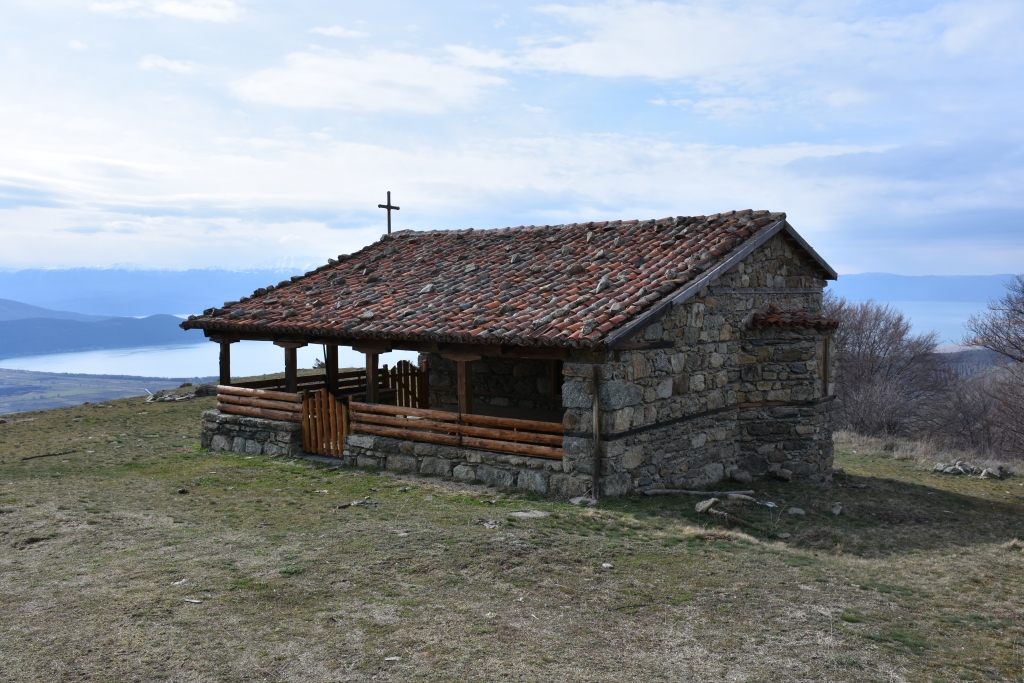 In winter you can visit the ski center of Vigla Pisoderi, one of the oldest ski centers in the country, with the longest snowfall period, with small and large slopes, easy or very difficult. The centre lies at an altitude of 1,650 m. about, 20 km away from Prespa. There are five lifts, 12 ski-runs (including two for beginners, four for children and one Olympic- sized), a ski school, ski equipment rental shops, and a beautiful chalet with self-service restaurant and café bar. Of course, you may opt for the surrounding cities (Florina, Nymfeo with the environmental center of Arcturos, Kastoria etc.) and very soon, I hope, Resen, Ohrid, Bitola, Pogradec, etc. Finally, after a good and active day, you could have a wonderful dinner in one of the many taverns and restaurants and a good night sleep in any of hotels around. Stratos: Recently, I pioneered the creation of the “Association of Tourist and Related Activities of the Municipality of Prespa” of which I was elected President. We have the goals of promoting our region in all decision-making centers of Greece and the European Union. We also need to organize the cooperation of all companies which are directly or indirectly related to our tourist product. I hope soon we’ll be able to create a Web portal offering the visitor access to everything s/he will need for their stay. And, with the forthcoming opening of the border with Northern Macedonia and we hope soon with Albania, we’ll work towards better transnational cooperation between the respective companies in our neighboring countries. And if you ask me which is the best time to visit Prespa, I will answer – any time! In winter, when everything is covered in snow, you can spend your time at the Vigla Pisoderi Ski Resort. In the summer, you can relax at the lake beaches, hike on the surrounding mountains, and watch farmers and stockbreeders at work. Spring is ideal for watching rare birds like egrets, cormorants and pelicans executing their intricate dances, and the ground is covered with wild flowers. Finally, fall is the time of the romantics, as the tree leaves start changing color, turning from green to yellow, red, and purple. The sky fills with migrating birds coming from the Balkan inland, and the fields offer us their fruit. My personal favourites are spring and autumn, but of course it’s totally up to you. 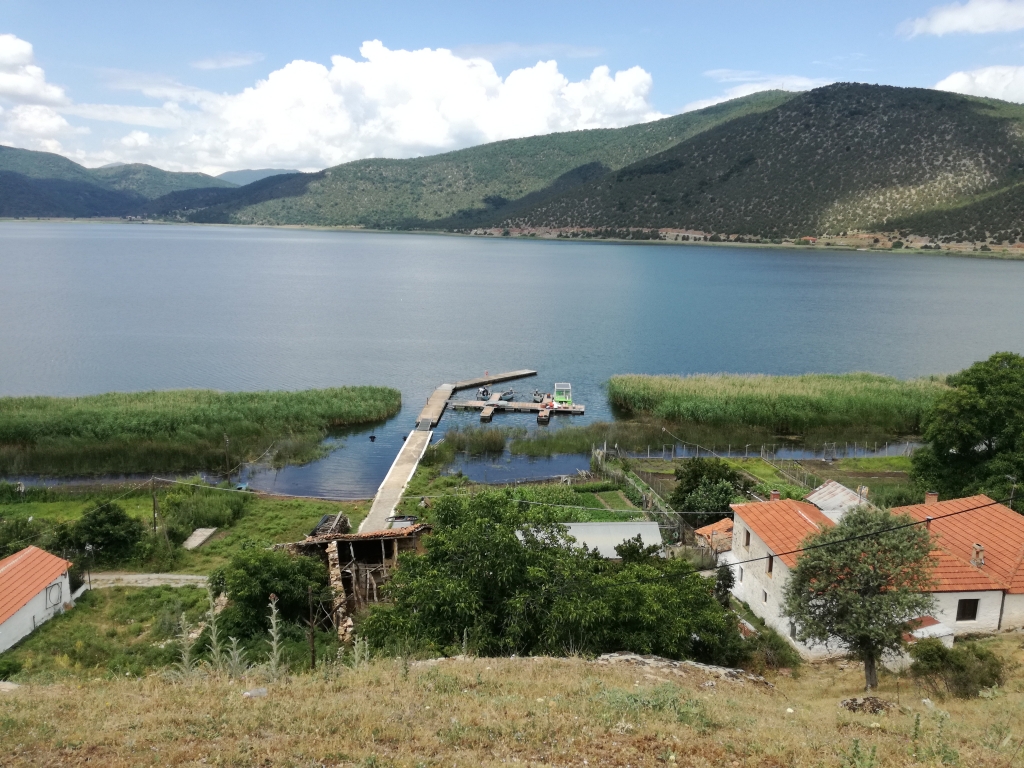 Stratos Vassilopoulos speaks Greek and Macedonian as his mother tongues, English fluently and Bulgarian and Serbian he understands as related languages. He has two already grown-up children. His son Theodoros lives in Brussels and works for the European Union and his daughter Danae, a multinational corporate executive, currently lives in Atlanta, USA.

You can meet my other friends here.