The Vineyard or the First Homely Hotel in Cappadocia

The Vineyard or the First Homely Hotel in Cappadocia

Today I’d like to tell you about a place that fell on my heart. It’s called The Vineyard Cave Hotel, but I named it The First Homely Hotel in Cappadocia by analogy with The Last Homely House East of the Sea by the immortal J. R. Tolkien and his Middle-Earth. My place is more or less in the middle of Turkey and now I will share how and why it became my favorite. 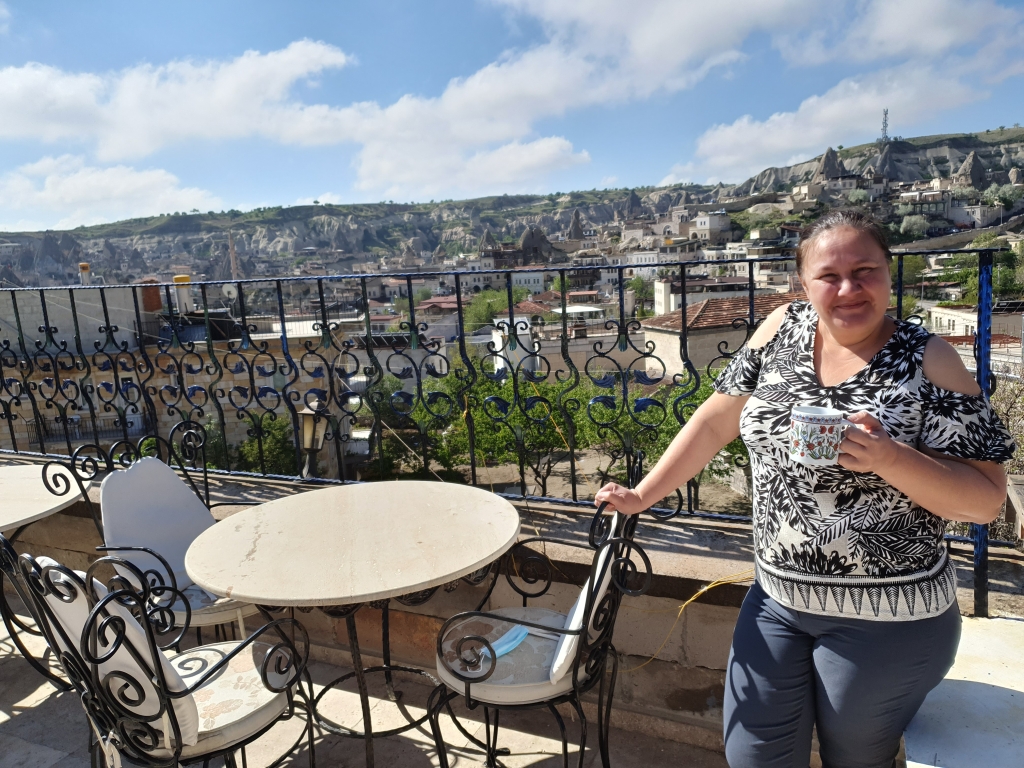 Imagine now that you are on your way to Cappadocia. The time is the beginning of May, the year is one of COVID and the whole of Turkey is in lockdown. Various ministers and other important people have loudly promised through the media that tourists would be able to roam freely throughout the country and even, haha, it would be better to be a tourist in Turkey at the moment than a local, but you still feel a little worried. What if you travel 1,500 kilometers to the heart of Anatolia and there you find yourself really “locked”, supposedly stuck in a hotel? And the promised tourist sites – locked all the same? It’s no joke, especially when the Istanbul-Ankara highway looks like this:

I’m not complaining, we traveled very calmly, but a bit like in a post-apocalyptic science fiction. So, there you are, driving endless kilometers in this situation and at one point you start to feel that you no longer know where you started from, where you are going and if you will ever get anywhere at all. The usual highway effect, but amplified by lock-down. Sometime at dusk, you get off the highway past the local urban center of Nevsehir and start looking around for Cappadocia. You haven’t been here before, but you’ve seen pictures. There is no sign of the damn rocks until you turn from Uchisar to Goreme and then things start to clear up. 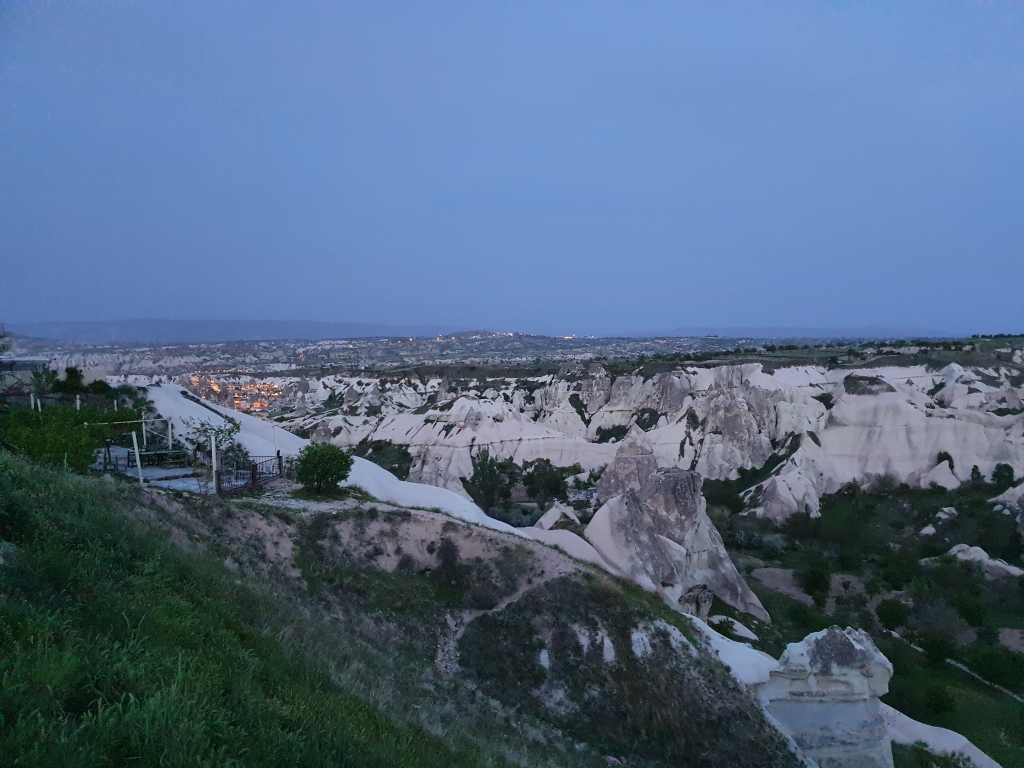 Goreme is the small thing that flashes at the bottom of the photo on the left. Extremely nice village, I guess overcrowded in non-Covid seasons, but in our case a great place to be. You will notice in all my photos a significant difference (or rather hundreds of them) with the usual views of Cappadocia. The sky is obviously devoid of the many colorful balloons we are used to seeing. I personally did not miss them, but they are still the trademark of the area. But let’s go down to Goreme and follow Uncle Google and his Maps to the Vineyard Cave or our chosen temporary home – a family hotel in Cappadocia. 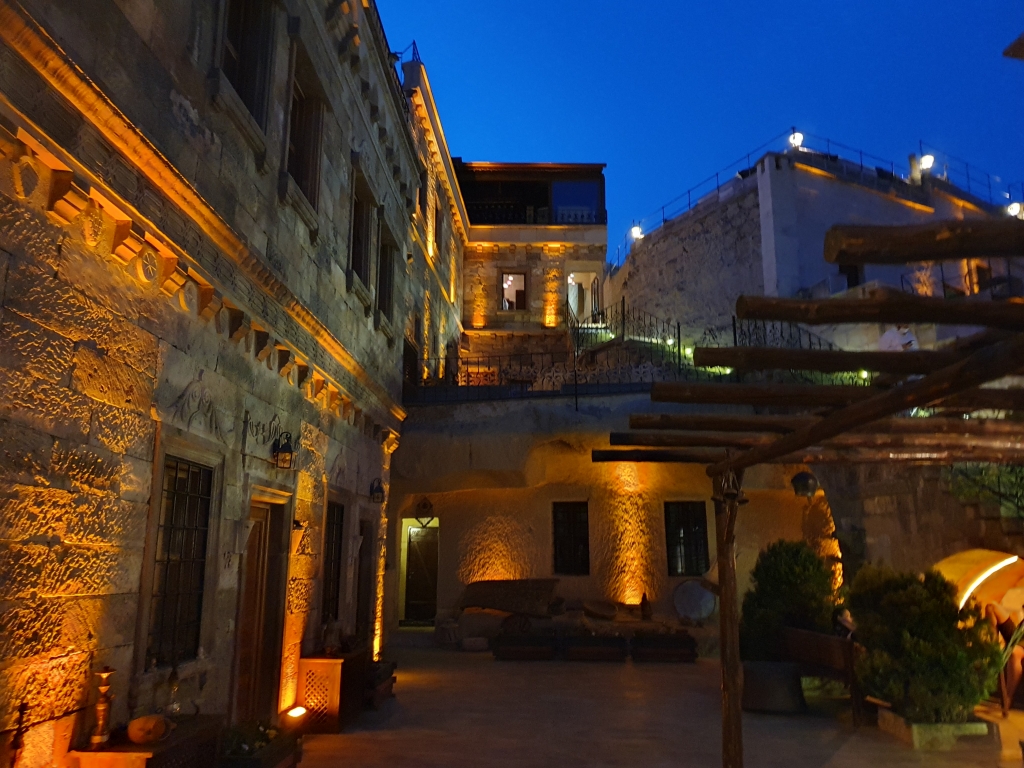 After a whole day in the nothingness, this sight was greeted by me with tremendous joy. As soon as we entered the yard, our host Osman appeared on the stairs above. “Come in, Simana, you’re welcome!” And I answer, “Wait, I’m watching!” The man carried almost all our luggage to the room with his own hands, then accommodated us on the large terrace with a fantastic view of the village, served us tea, offered to order us dinner (lockdown, everyone only made take-away food), then produced out of somewhere a map made by him of Cappadocia and drew us his suggestions for routes for the coming days. We could fully appreciate the terrace only the next morning, already in the light. 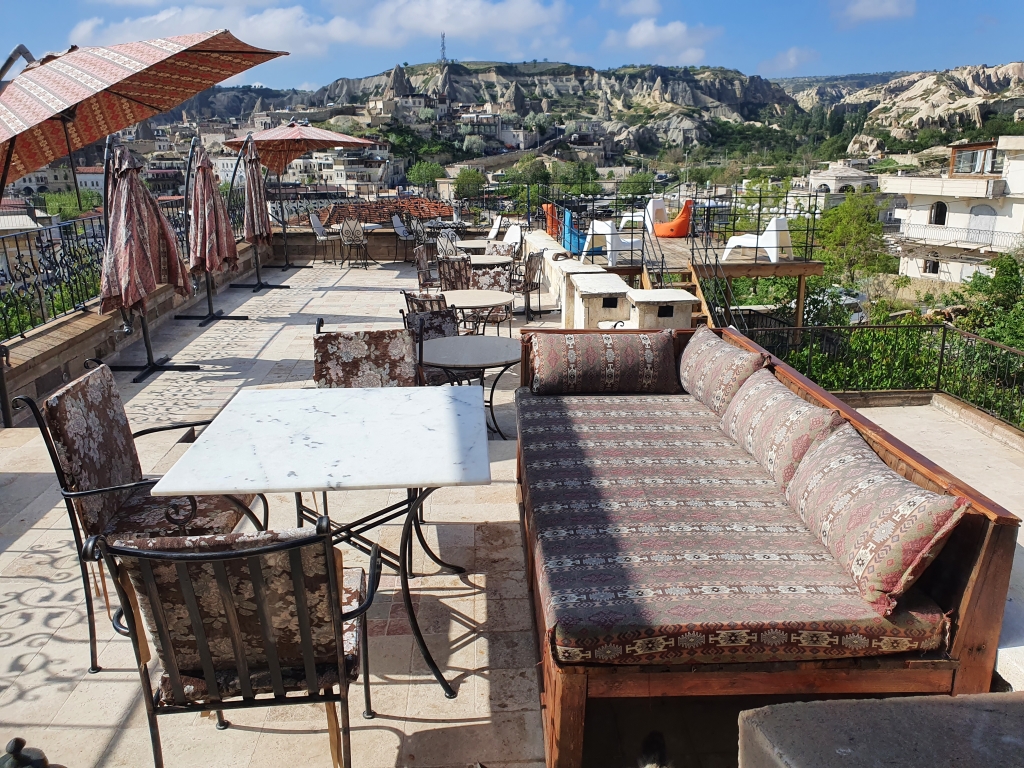 Here we had breakfast and dinner during our entire stay in the company of an extremely friendly cat and the view of the incredible cliffs of Goreme. Osman told us that this was his ancestral house, which he only expanded after it occurred to him that having a family hotel in Cappadocia, especially in such a place, was a great business. He named it “The Vineyard” because one of his grandfathers was a vine grower – although they no longer made wine. Osman himself sold carpets for many years and apparently liked them because the house was full of them. I admit, I liked them too.

In addition to the usual floor function, they also served as decorations, along with many other small things in the interior. I’ve always thought that you can tell when someone is doing their job with love, by their attention to detail. In the “Vineyard” the details were respected. Starting with the wrought iron chairs on the terrace, distinctly different from the multi-coloured plastic cheap ones of the neighbor. Tailor-made awnings and umbrellas, I guess, from the same thick fabric as the upholstery of the sofa and the chairs in question. Yard decorated with ancient household utensils and tools, many of which related to the viticultural business of  the (great) grandfather. We can continue with the guest rooms themselves. 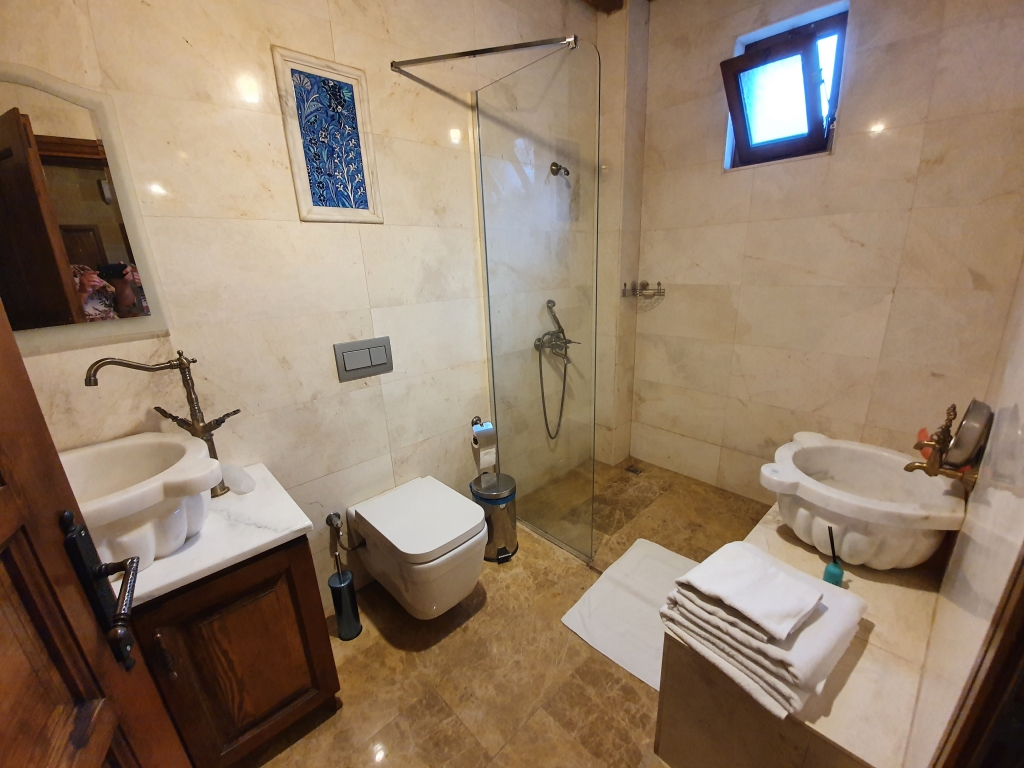 I must mention the use of local stone for the walls and floors of the bedrooms, the wooden furniture and carved ceilings, the surprising decorative details that appeared everywhere. In the bathrooms, the washbasins were made of marble, and the faucets and handles of the taps and showers were made of wrought metal. We liked the bright ceramic panels so much that we went especially to the Gurey Museum of Ceramics in neighboring Avanos to look for one. We even found it and managed to buy it after an exhausting bargain, but that’s another story. For now, I leave you once again with a view that possibly every hotel in Cappadocia can offer; to us it was offered by Osman and his Vineyard Cave Hotel. 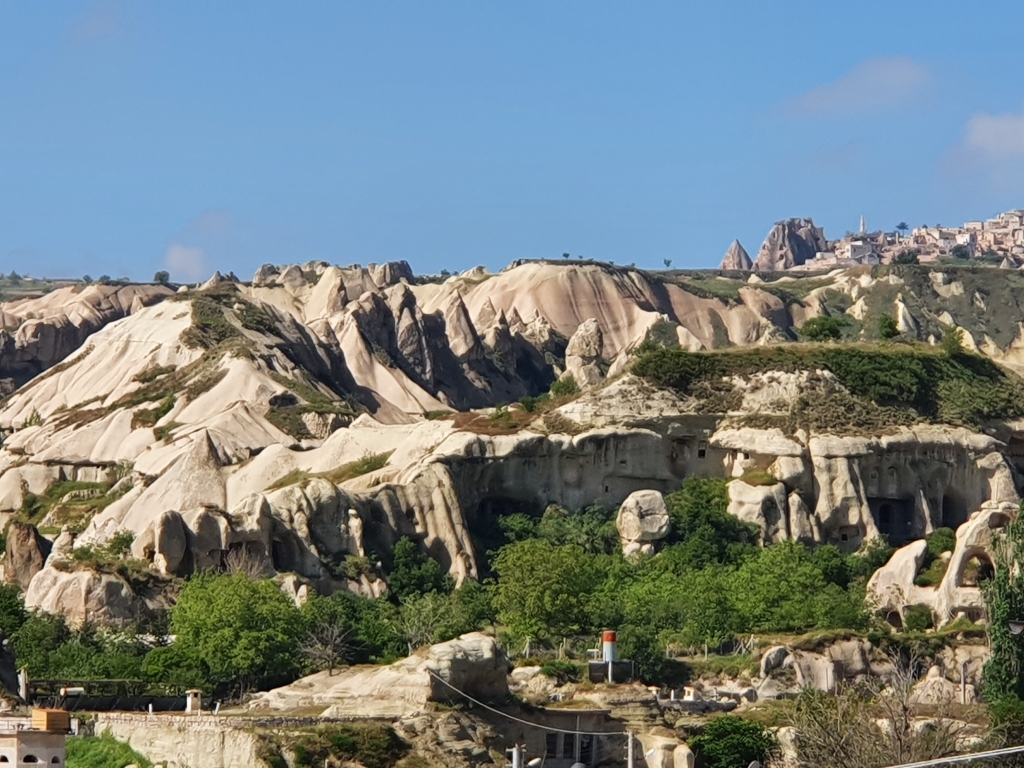 You may read more about Cappadocia in my articles here, here and here.