Flanders – one memory of chocolate and a different October

Flanders – one memory of chocolate and a different October

They say that the best, and maybe even the only way to claim that you have really visited a place is to take at least 4-5 days and mix with the crowd. If you want, check the main sights of Flanders on a list, but then just go out and walk the streets, see the windows, shops, yards and decoration on fences. Be sure to buy something unplanned and eat it on the spot. Take photos of things that are nothing special except that they somehow impressed you. For example, how they spell The White Pelican in Flemish. 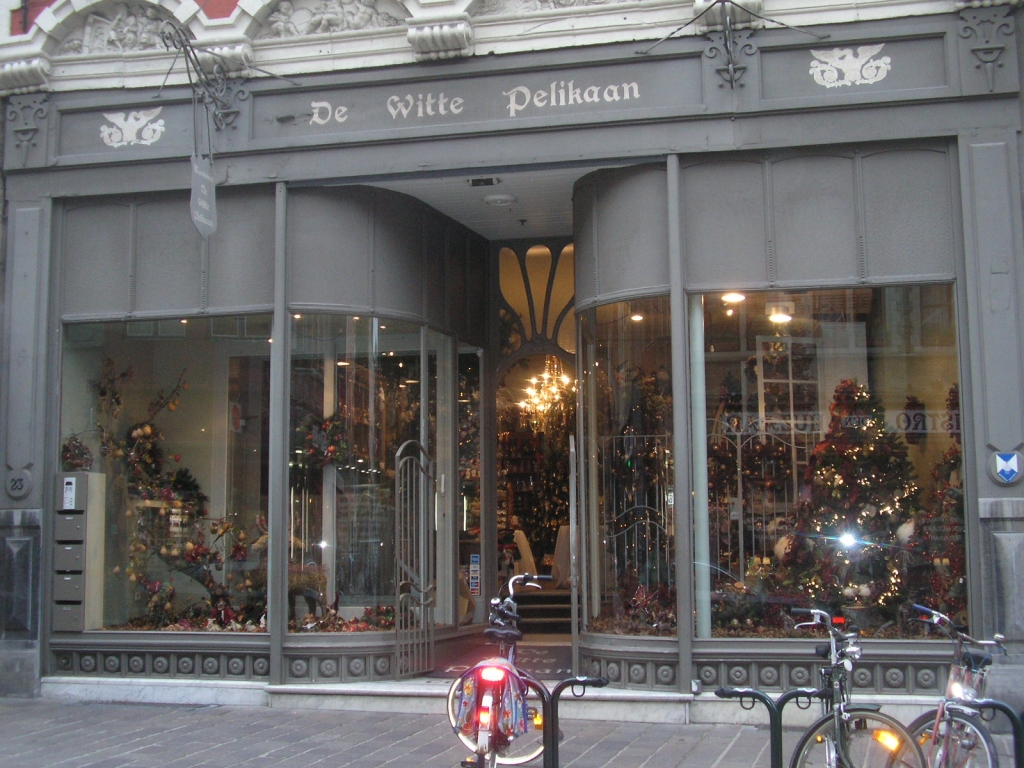 I don’t usually do that. Usually, there is never enough time and the available one goes exclusively for the above-mentioned list of attractions. From time to time, however, it happens  to station myself somewhere for a longer period of time. For example, a few years ago I was running a project to exchange experiences with Flanders in the field of rural tourism, and the exchange included a seven-day study trip to the Bruges region at the end of October. There was practically no time for sightseeing, because we were gathering the desired experience all day long, including by getting acquainted with specific rural tourism sites.

This is what a rural guest house Flemish style looks like. Its name was The House of Roses, although due to the season we did not see any roses. But, to return to the topic, our opportunities for extracurricular tourism were limited to evening walks around Bruges after “classes”. The museums were already closed, it was getting dark early and there was no opportunity for good photos, but on the other hand, the chocolate shops and the cafes were temptingly at our disposal. The Flemish made everything from chocolate, even things that, as Terry Pratchett used to say, you couldn’t share with your old mother without embarassment. Here is a relatively safe showcase: 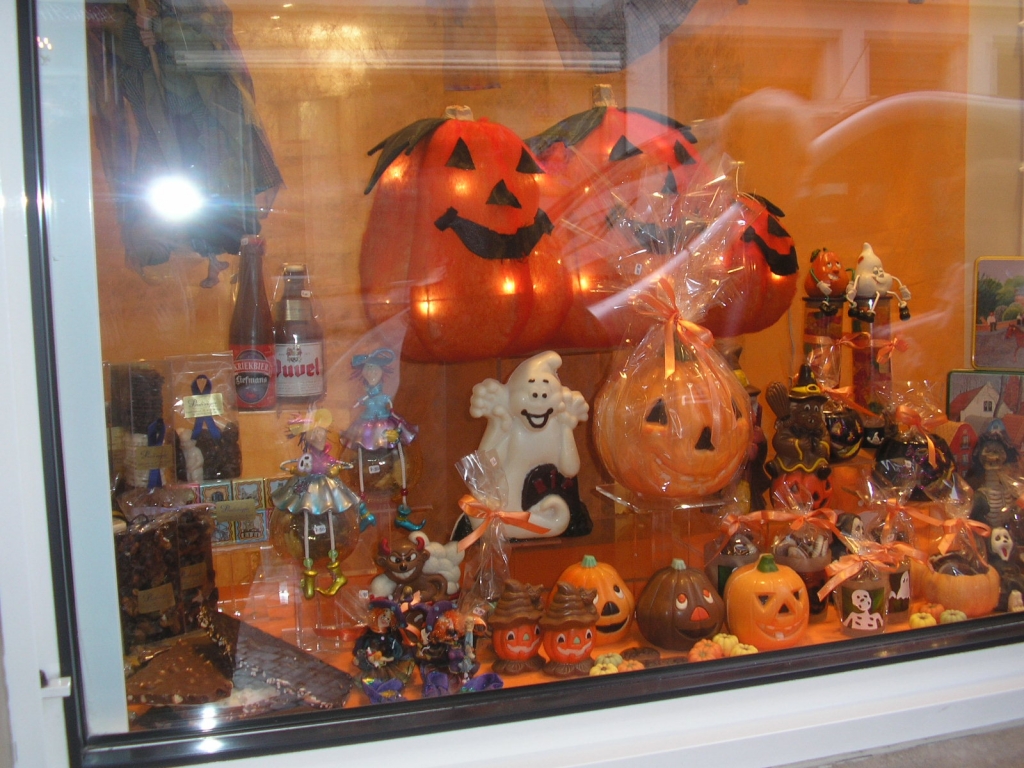 Apart from chocolate, I remember two things from Bruges. The first is the central square, on the one side with very serious buildings such as the City Hall, the strict city bell tower, etc., and on the other – frivolously colorful narrow and tall houses, glued to each other and supported by the awnings of cafes and restaurants below. And in front of them – a parking lot for horse-drawn carriage transport, from which we failed to take advantage. A typical view of Flanders. 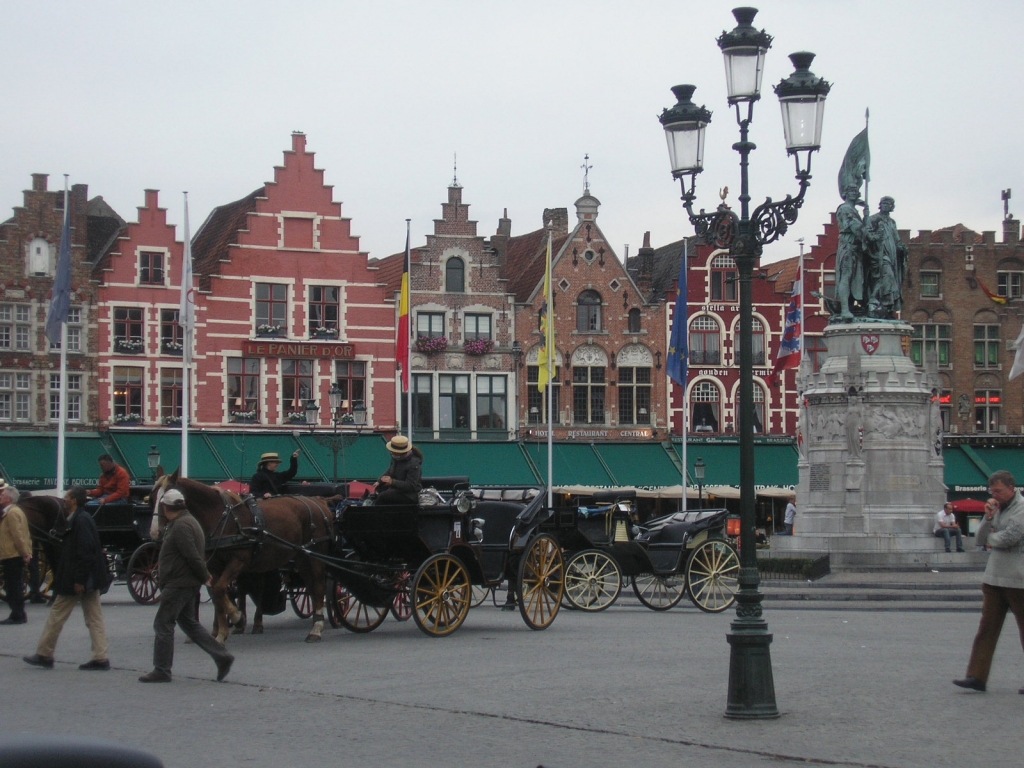 The second thing remaining in my memory, which we also did not take advantage of, were the canals, for which Bruges is sometimes called “Chocolate Venice” or “Little Venice”. Cutting through the heart of the city as a second circulatory system and an alternative mode of transportation. I have seen many colorful photos of Bruges with canals, sun, flowers and even some huge whale statues, but in our late October and evening conditions, we managed to achieve only a slight gloomy resemblance, and not devoid of intruders. 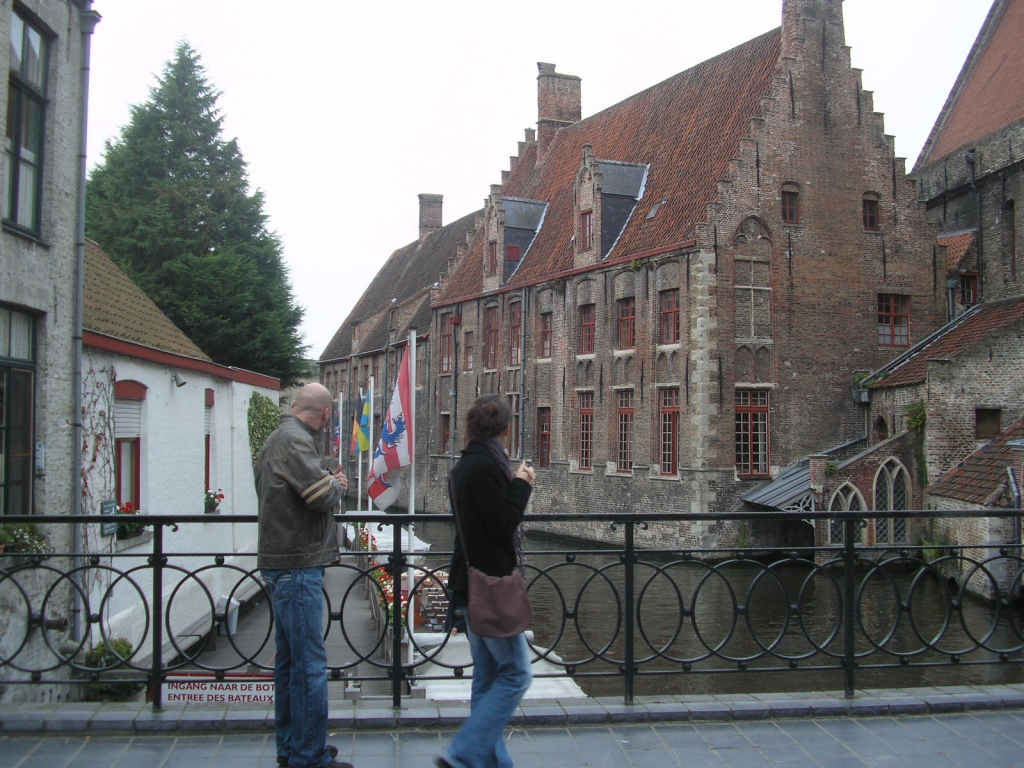 And while we are still talking about water, one day they took us to the North Sea port of Ostend, which ‘looks’ from Flanders almost to the mouth of the Thames to the west. The strange metal tree-like structure protruding from the edge of the sea, which you can see in the top photo, is enigmatic for the city. I personally have to admit that I didn’t appreciate it much then, as I was busy clutching the sides of my jacket so that I wouldn’t be suddenly undressed by the north wind. However, I was definitely impressed by how the Flemings built themselves a beach in the water. 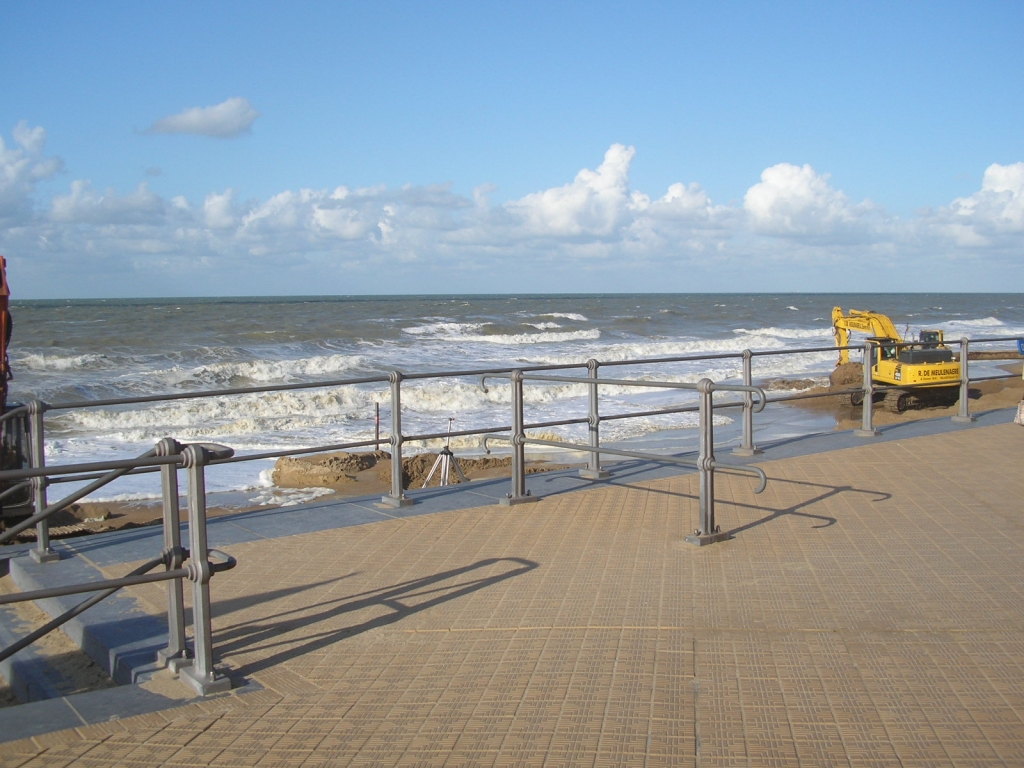 I also happened to visit Brussels while I was in Flanders, albeit for a very short time and completely unforeseen. It so happened that one of my fellow collectors of Flemish tourism experience saw on the morning of our last day that members of a passing Japanese group were leaving their luggage in front of the rooms when they went down for breakfast, and decided that it was some local custom to follow. That the Japanese loaded his luggage with theirs and set off in an unknown direction was the small problem. The bigger one was that his international passport was inside. This is how I arrived with him in Brussels earlier than the others to catch the Bulgarian embassy. 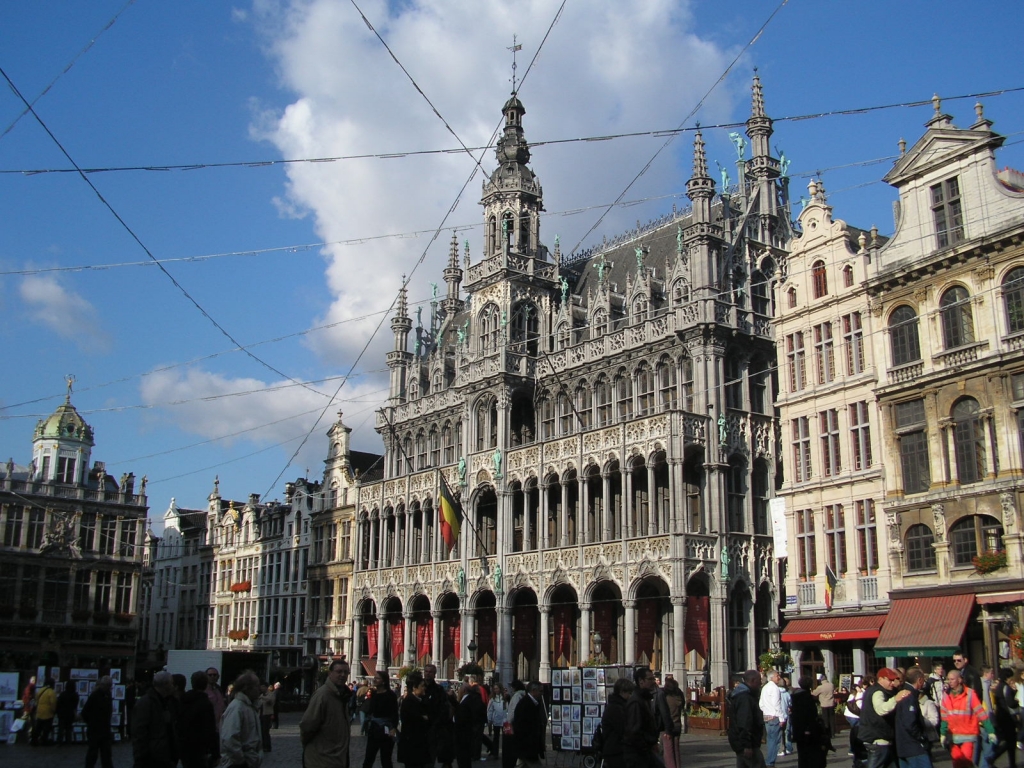 The building above is, unfortunately, not the Bulgarian embassy in Belgium, but part of the Grand Square in Brussels, the so-called Grand Place. Extremely impressive and beautiful spot, one can spend hours there just staring at the decorations of the facades. It is obvious that they are the work of the richest and most influential people of their time, namely the heads of guilds in the late 17th century. My only regret was that again, due to seasonal circumstances, the flower markets, which often cover the whole square and give it a simply indescribable appearance, were only partially present. 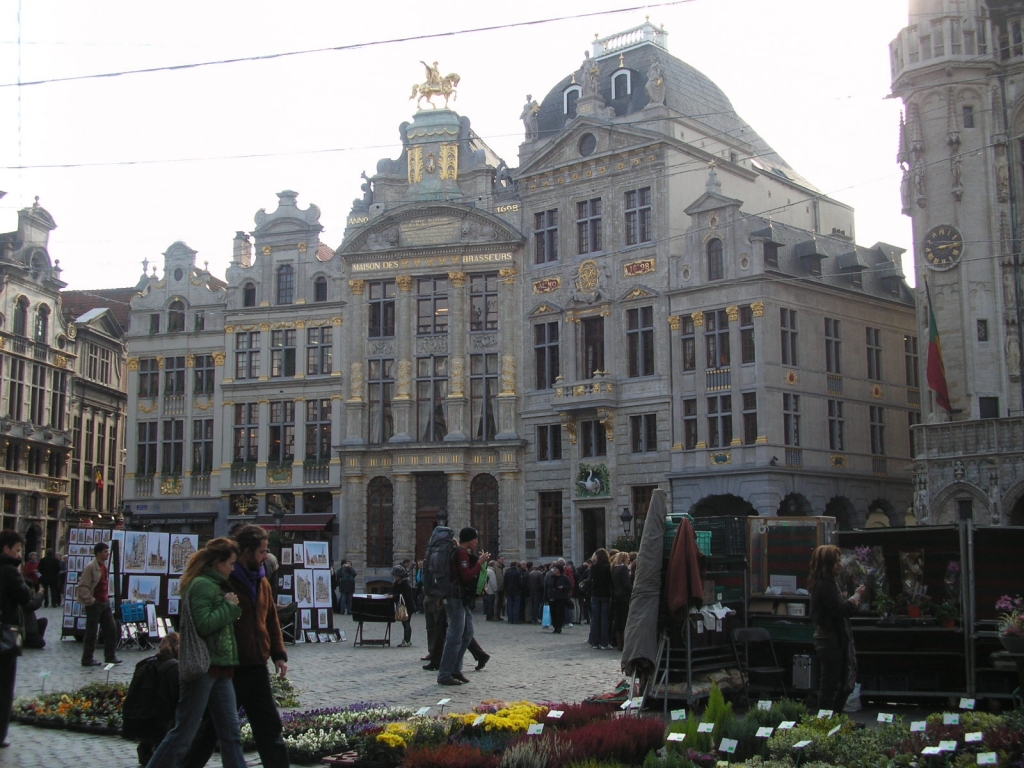 Here I conclude with another memory of chocolate, in one of the side streets of Grand Place. Living in complete ignorance of the French language, I decided that the name was something like “The Grand Gourmet” (La Cure Gourmande), and I really liked it. Later it turned out that it should be translated more like “The Greedy Medicine”, which I liked less. No matter the name, however, the interior was like a magical dream for all confectionery lovers. And just look at what the windows promised us – a meeting with a “biscuitier”, “chocolatier” and other suppliers of sugar (sucrecuitier). A splendid farewell memory from Flanders! 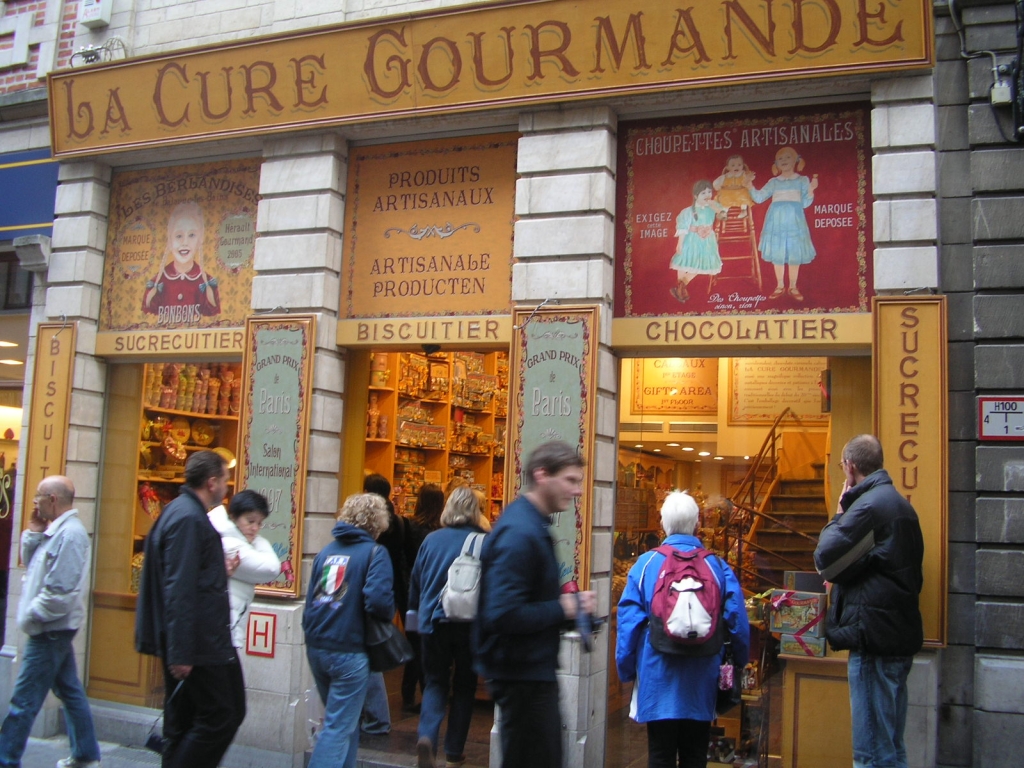 You can see other October memories of mine if you’d like – from Rome, Jordan or the closer mountain of Belasitsa.