A historic festival in Plovdiv

A historic festival in Plovdiv

The time is the last weekend of September, and the place – Lauta, one of the Plovdiv parks. The occasion is a historic festival in Plovdiv with the appropriate name “Plovdiv – ancient and eternal”. The day is Saturday, the second day of the festival. The culprits are the enthusiasts from the Philippopolis Association for Historical Reconstructions, whose dream is to see Plovdiv, as one of the oldest living cities, have such an appearance. Their dream has been official for two years now, since the association was established, and unofficial – long before, when they started visiting such festivals. I present to you Lubo, Venci and Krassimir, part of the organizers from “Philippopolis”, and their dream come true.

Amidst Lauta’s mixed forest-and-meadow landscape, we found tents, sheds, horse-fences, a variety of curious props, and stalls full of things. A kind of training “halls” where you could try archery or reckless swinging of a whip. And a colorful crowd of historical and contemporary characters, representing of course the participants in the festival and the visitors. The two groups had mixed a bit, by the way, which added to the charm of the gathering.

Traveling from Blagoevgrad, we arrived in the midst of this historic festival in Plovdiv and as real Bulgarians, we first checked the stalls, so as not to miss something. There was beautiful jewelry, including replicas of original antique finds. There were clay goblets, probably similar to those in which the old Bulgarians drank their wine. There were masters who demonstrated their art directly to the audience. There were also candles in traditional and modern shapes, some of which you would not put in your children’s room. 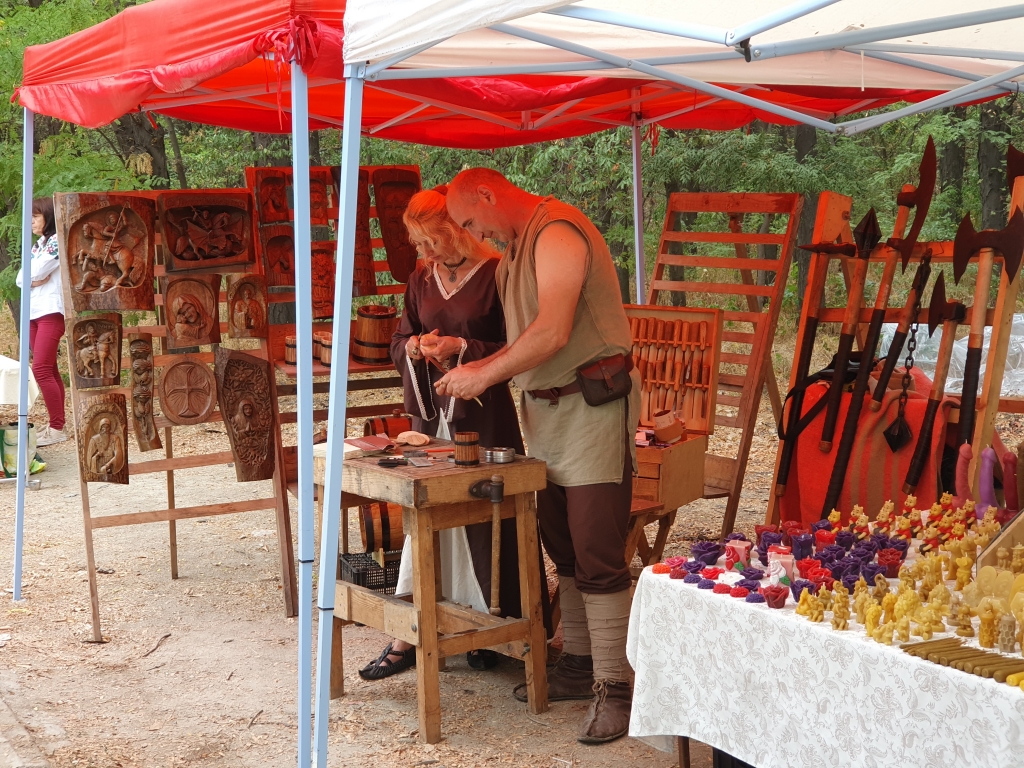 There was also a stand where we could not win the fight for a tasting of the unusual soup of lentils, chickpeas, cheese and a strange for our understanding combination of 14 types of spices, including cinnamon and cardamom. Instead, they told us about Byzantine emperors who suffered from gluten intolerance, who naturally did not like to be served gluten-free bread in those days when white bread was a symbol of high social status. Instead, their cooks used a mix of spices that managed to make the bread bearable. 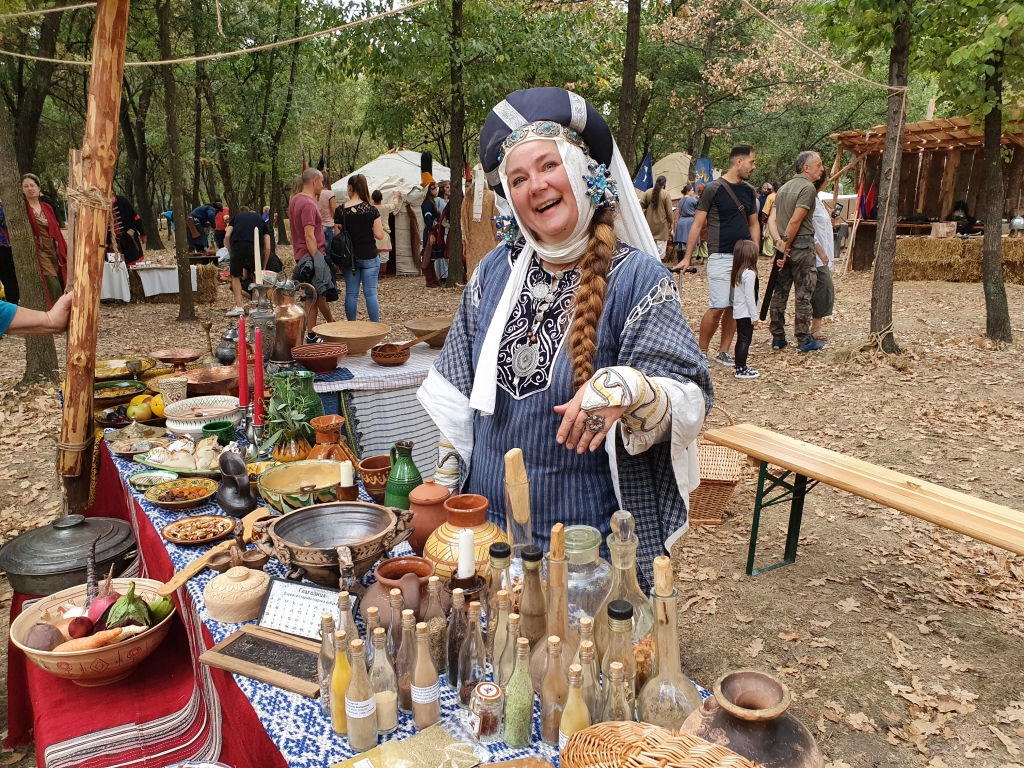 There was a dense program of reenactments and historical demonstrations amidst all this decor. Upon arrival, we hit the slave market in the Roman Empire. We were offered to buy Yordannis, who was a “philosopher”, supposedly a scientist, for 25 denarii, or Bell, who understood herbs and potions, for 12 denarii. After all, a scientist is a scientist. Tyra, the gladiatrix, or female gladiator, was only a little cheaper than a scientist, for 20 denarii, while the poor Mutus Barbericus, a blacksmith, costed only 3. Personally, I liked best  Cacaphonicus, the musician, and he was worth only 7 denarii, but I couldn’t figure out what to actually do with him if I bought him.

According to my observations, the young visitors of this historic festival in Plovdiv liked best the demonstrations of various fighting skills and techniques, including gladiatorial battles. It must be acknowledged that the enthusiasm and motivation of the participants were worthy of respect and even some envy. Their appearances were prepared very carefully and seriously and we didn’t see a single watch flashing on someone’s wrist. And the sheer enthusiasm with which they fought to prove themselves worthy in the arena provoked a well-deserved applause from the audience.

At one point in the afternoon, the purpose of the horse enclosure became clear. I speak of them quite affectionately, the animals were very beautiful, very strong, well looked after and well trained. Even better trained were the riders, who showed us different techniques of archery on horseback – against a stationary target, against a moving target, avoiding being hit by an enemy’s arrow and so on. With and without the help of a well-trained fighting dog. In short, both animals and humans knew their job very well. 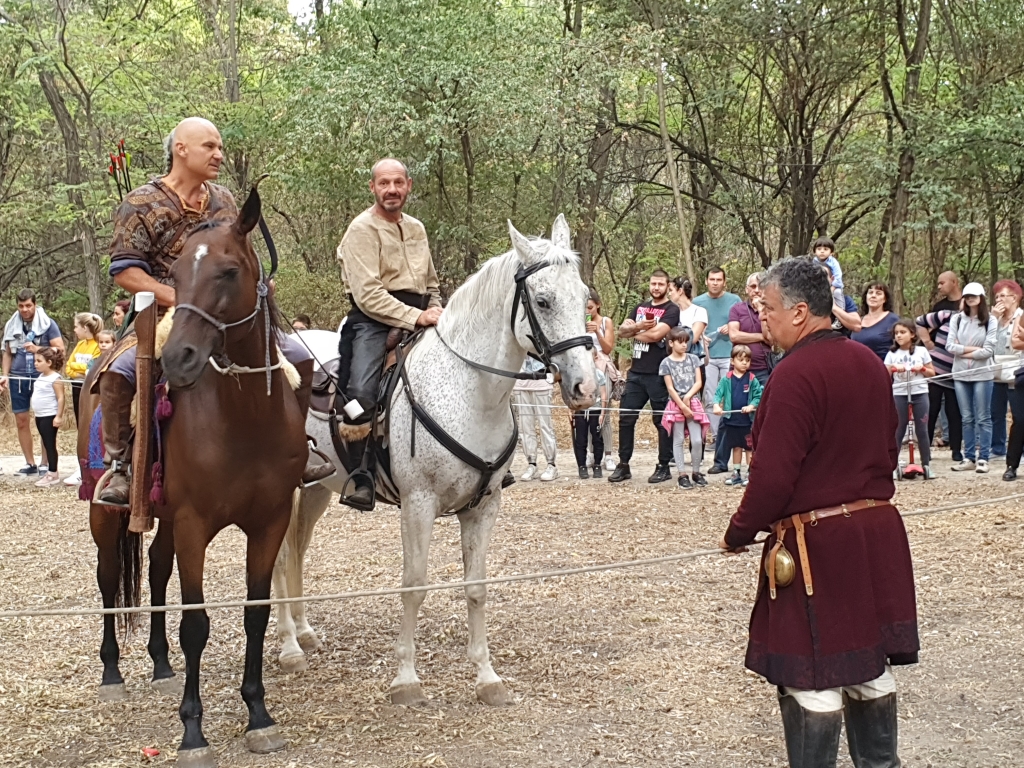 The day ended with a reenactment of the wedding of Despot Alexy Slav, which included almost all participants in the festival from the Middle Ages period. There was the welcoming and dressing of the bride. There was a procession of representatives of neighboring nations and countries who came to greet the newlyweds. There was a music program without which no wedding in human history had obviously taken place. There was even a knight’s tournament in honor of the Despot, which, thank God, ended in bloodlessness. All in all, a wonderful historic festival in Plovdiv! 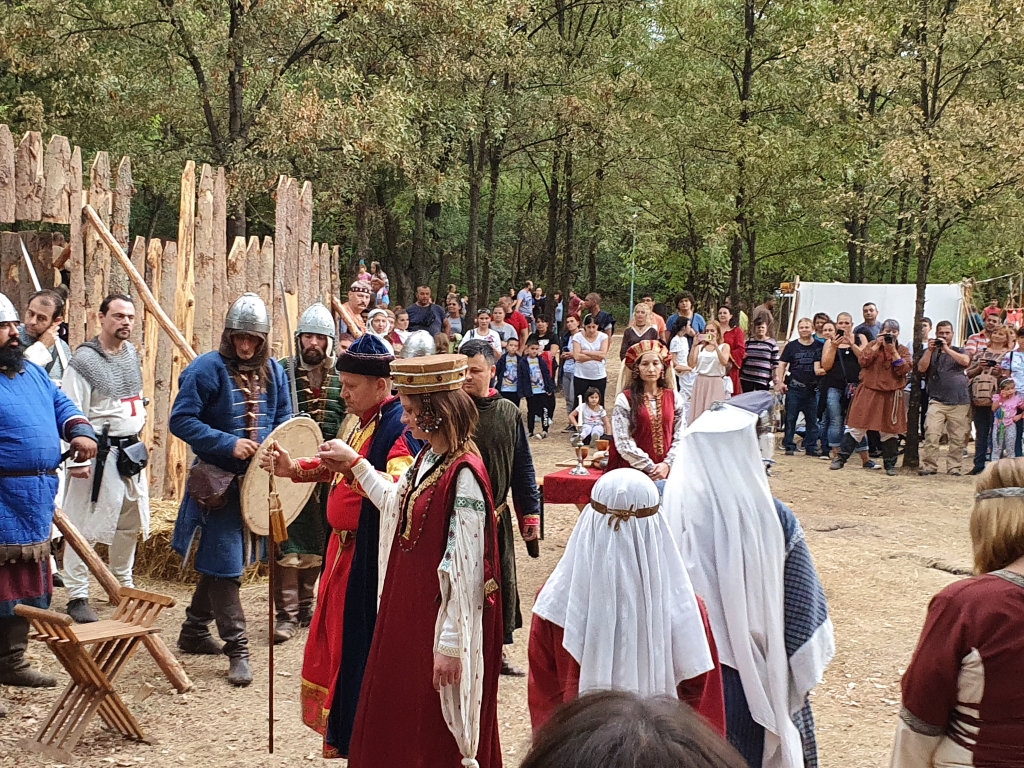 You can read about other favorite festivals of mine here and here.