Dryanovo: embraced by the Balkan

Home/Bulgaria/Dryanovo: embraced by the Balkan
Previous Next

Dryanovo: embraced by the Balkan

I suspect there isn’t any Bulgarian who would not have special feelings for the symbol of our little corner of the world – the mountain, whose name the whole Balkan Peninsula bears. And also for its historical significance and the sense of the Bulgarian spirit that hovers in the old houses, the painted churches, the green yards and the steep streets. Many beautiful villages and towns, hidden in the embrace of this wonderful mountain, are waiting to welcome us with coziness, to fill our senses with joy, and sometimes to take our minds with something completely unexpected, just when we are sure that we have already seen everything. So, what to see in Dryanovo, a beautiful Balkan town and municipal center located on the road Gabrovo – Veliko Tarnovo. 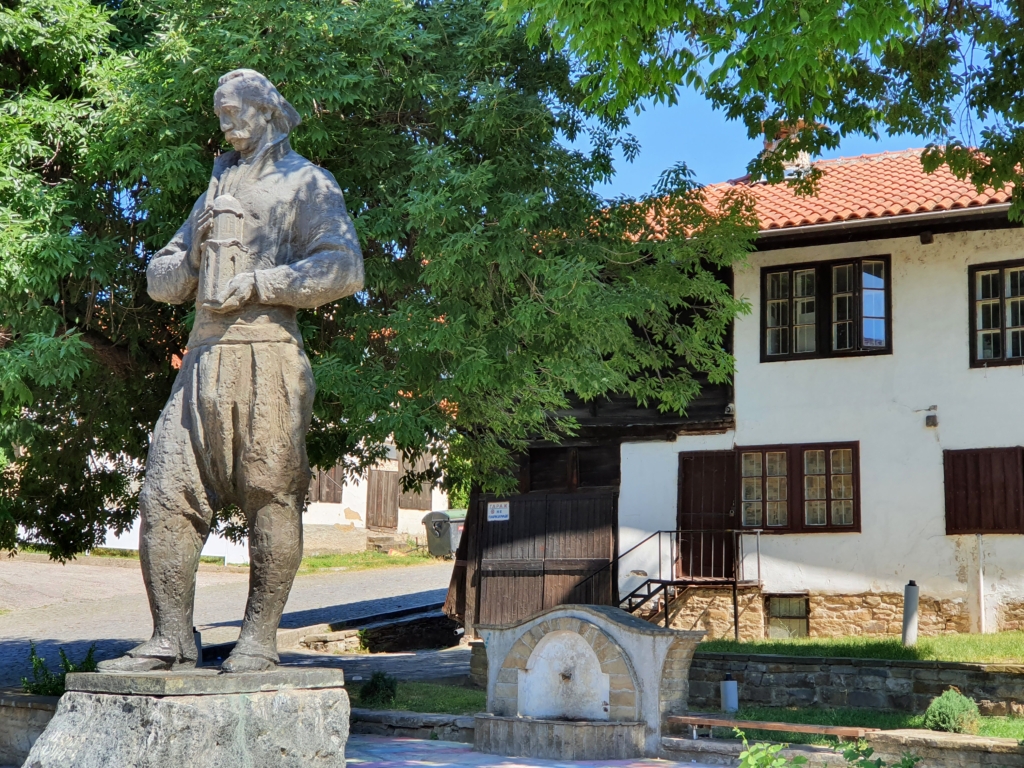 I will just mark the most famous tourist site in the area – Dryanovo Monastery with the nearby cave of Bacho Kiro. Instead, we will pay more attention to the town itself. One of its main merits is that, at the very beginning of the 19th century, it managed to give the nation one of its geniuses – Master (Usta) Kolyo Ficheto. An amazing architect and builder, whose works astonish and delight us all over the country. Naturally, in the center we are greeted by a statue of the master, right next to the entrance of the museum of “Kolyo Ficheto”, dedicated to his life and heritage. On the other side, we see one of the three National Revival Period churches of Dryanovo – Holy Trinity, which can be easily mistaken for an ordinary house from the street.

On the other hand, opposite across the square is a completely unordinary house with an all-wooden facade. This is Lafchiev’s house, also called the “house without nails”, as it is claimed that not a single nail was used in its construction. Inside we can see how people lived in the Bulgarian Revival Period, what they wore, what jewelry they preferred, what bowls they ate in and so on. Why are colorful braids hung on the back of the brides’ belt and what is the “sokai” in the female costume. And the curators claim that so far they have not had a single visitor who did not want to be photographed on the tiny three-legged chairs by the low table! 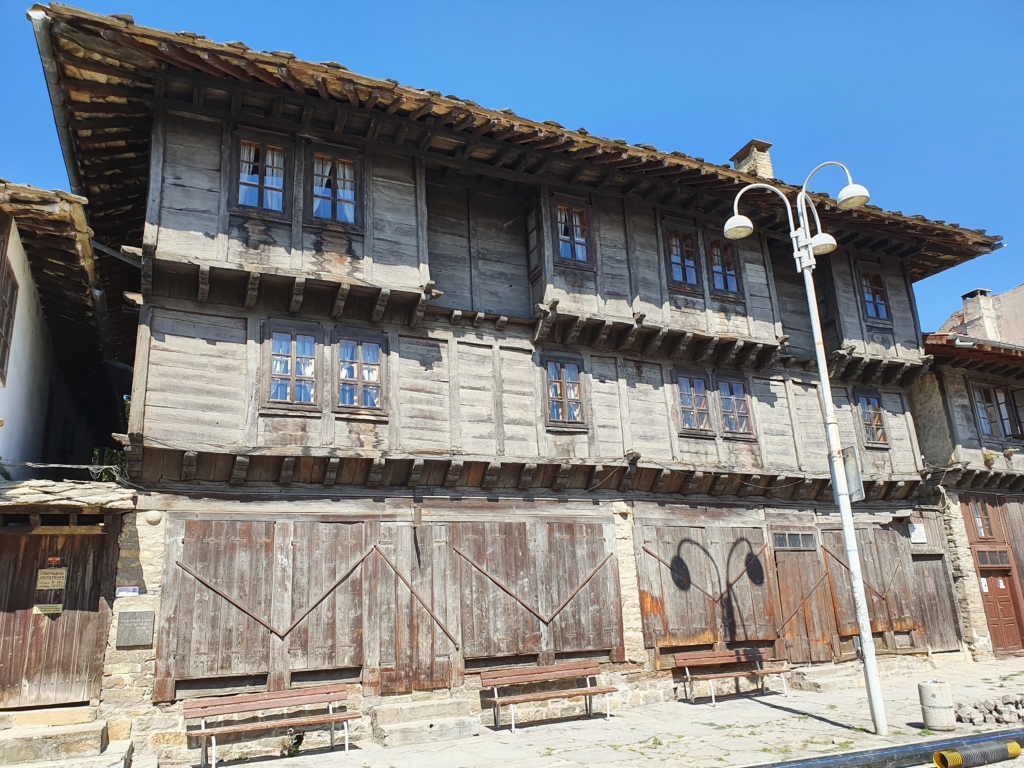 The main street, starting from the square, takes us to two of the works of Kolyo Ficheto. The first is practically hidden behind the facades of the houses on the street; a covered staircase leads to it, the entrance to which can be easily missed. It is about the church of Sveti Nikola from 1851. After hitting the passage and climbing the stairs, we find ourselves in a bright green yard with a fountain and a small cemetery with interesting memorial monuments. And in front of us is the church building, which is in a very good condition thanks to several renovations over the years. 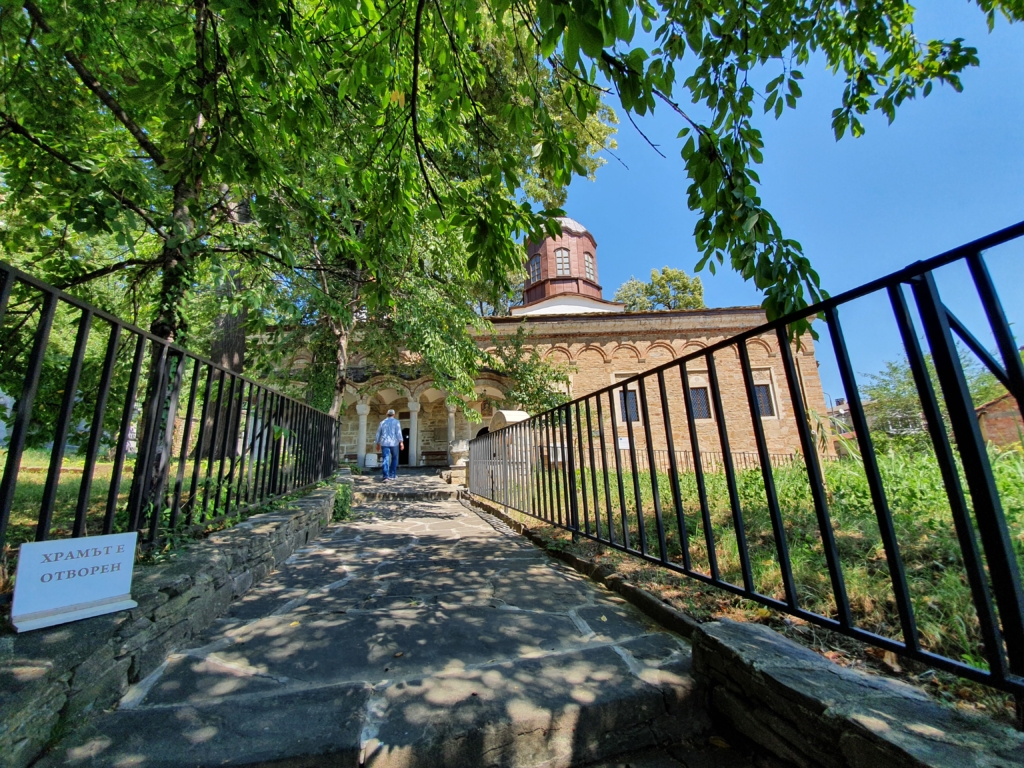 For me personally, the most interesting thing is inside the church. All web-sites emphasize the curved and painted balconies of the emporium in the back of the building, as well as the icons in the iconostasis, some of which are the work of the notorious master Stanislav Dospevski. All this is impressive and especially the painted balconies, as seen in the top photo. However, I was most impressed by the top row of murals on the side naves of the church. It is written that the frescoes were painted in 1926; it does not say by whom. In my opinion, they are from at least two different authors, and the top line looks like it was taken from a book of Russian folk tales. Here’s a look: 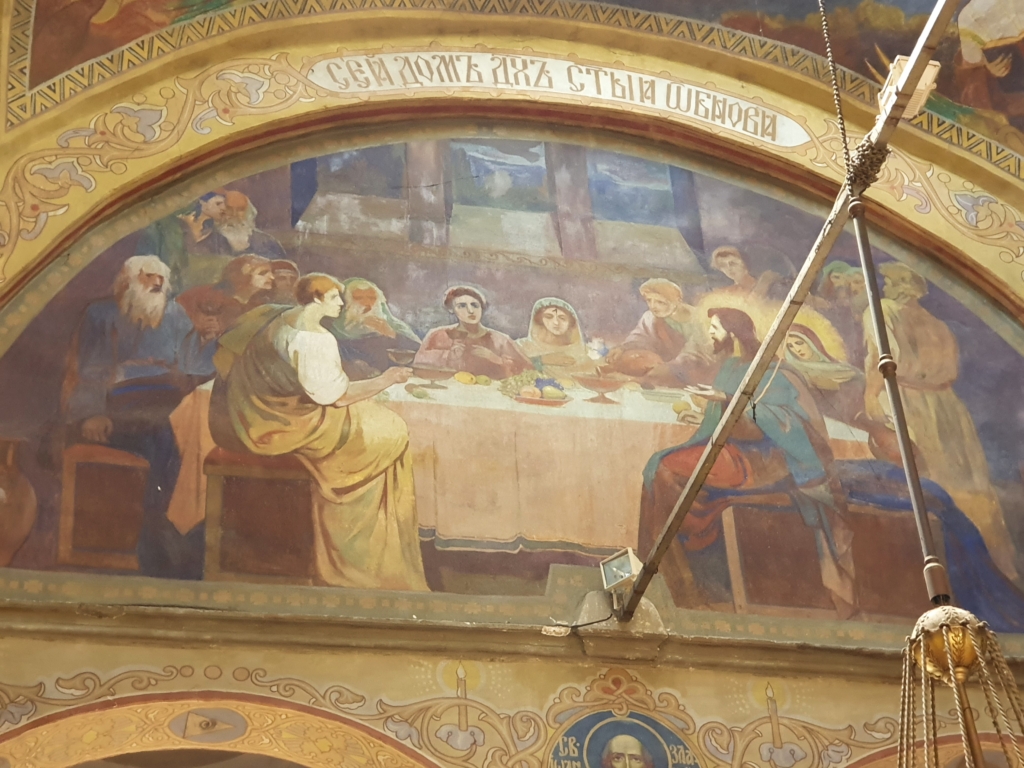 For the finale I will take you to the Ikonomov’s House, the other building of Kolyo Ficheto on the main street. Not that there isn’t what to see in Dryanovo further, but let’s leave something for you to discover yourselves. Such as the local High School, the Clock Tower or the relief map of Bulgaria, located opposite that tower. The Ikonomov’s House was inhabited until not very long ago, most recently as a “temporary” home for families who decided to settle in Dryanovo until they found a permanent home. The most impressive thing in it, of course, is the architecture, which from the back seemed better to me than from the facade. 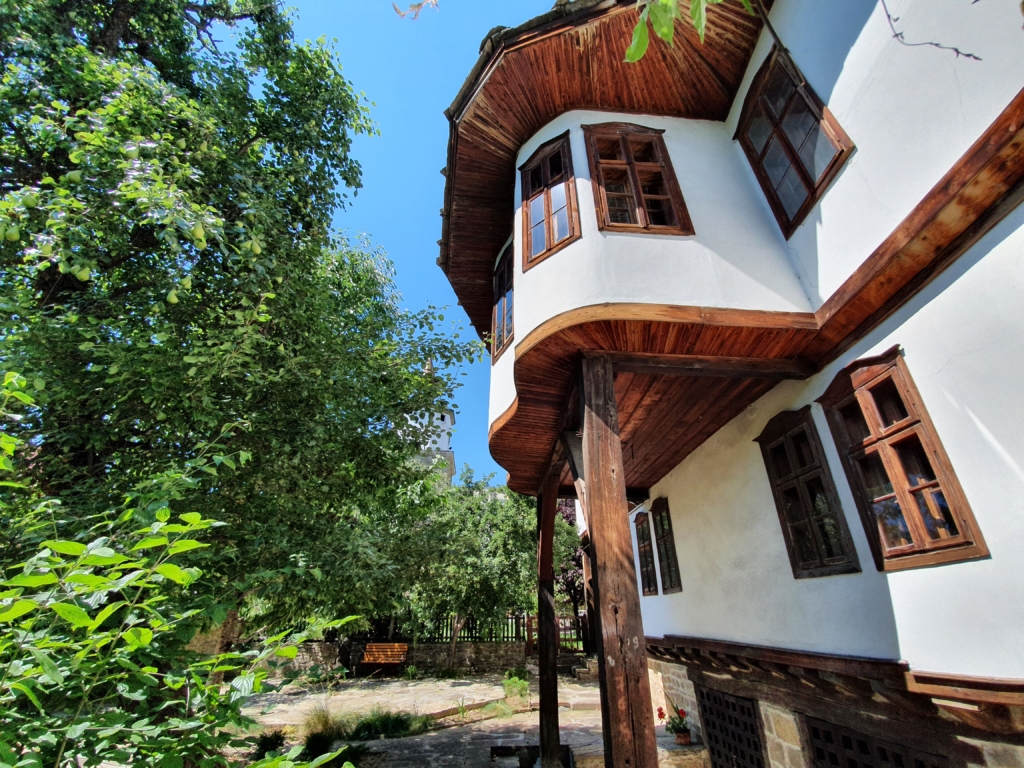 While we are talking about architecture, we must pay special attention to the basements. They currently display frescoes removed (actually saved) from old churches in the region, such as St. John the Baptist in the village of Kalomen. We can see the inscription that was written above the entrance – a standard inscription from the 18th-19th century in the religious Slavonic language that the church was built with the support and blessing of the Holy Trinity. We can also see some of the icons along with the murals. They all fit perfectly on the old stone walls under the thick beams of the ceilings. 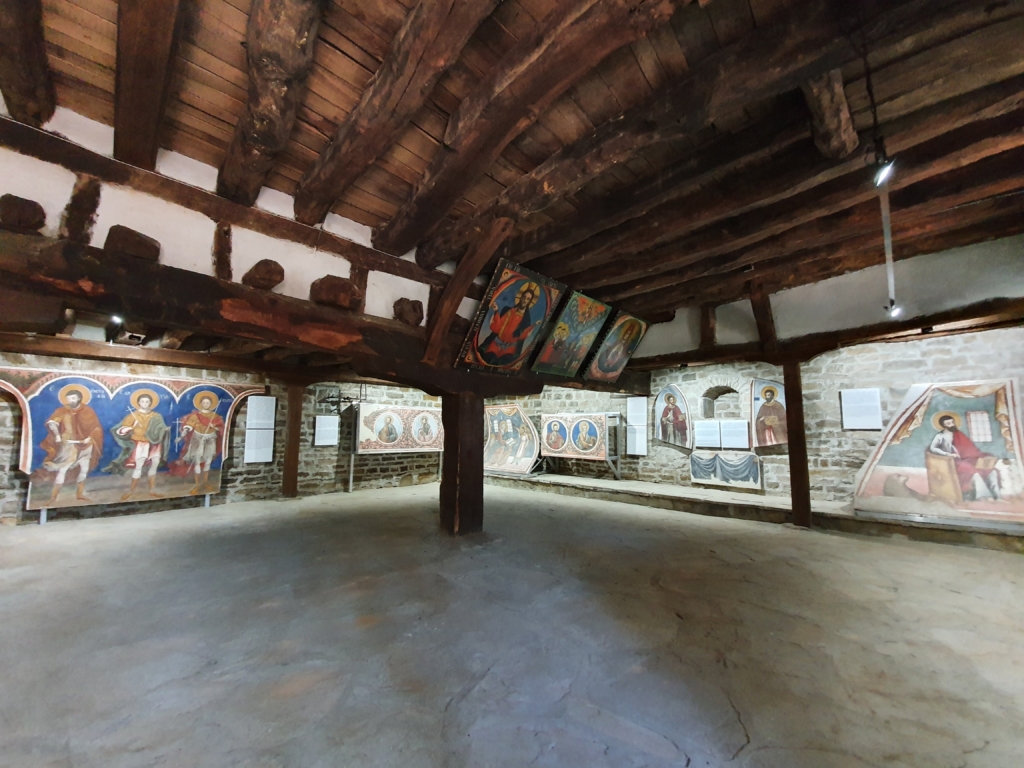 On the upper floors of the Ikonomov’s House we can see the ornamented wooden ceilings and almost nothing else preserved from the interior, which is understandable. Today, the rooms house an exhibition of icons from churches and homes in the Dryanovo area, including triptychs, home altars and carved side backs of hierarchical thrones. We can see some very valuable works from the 17th century, such as the only image in Bulgaria of St. Mary of Egypt with St. Zosimus. Or the huge scroll named Jerusalemia that every pilgrim had to bring from the Holy Land to prove his worship. In short, July may be time for the sea, but we will certainly not be bored in the embrace of the Balkan! 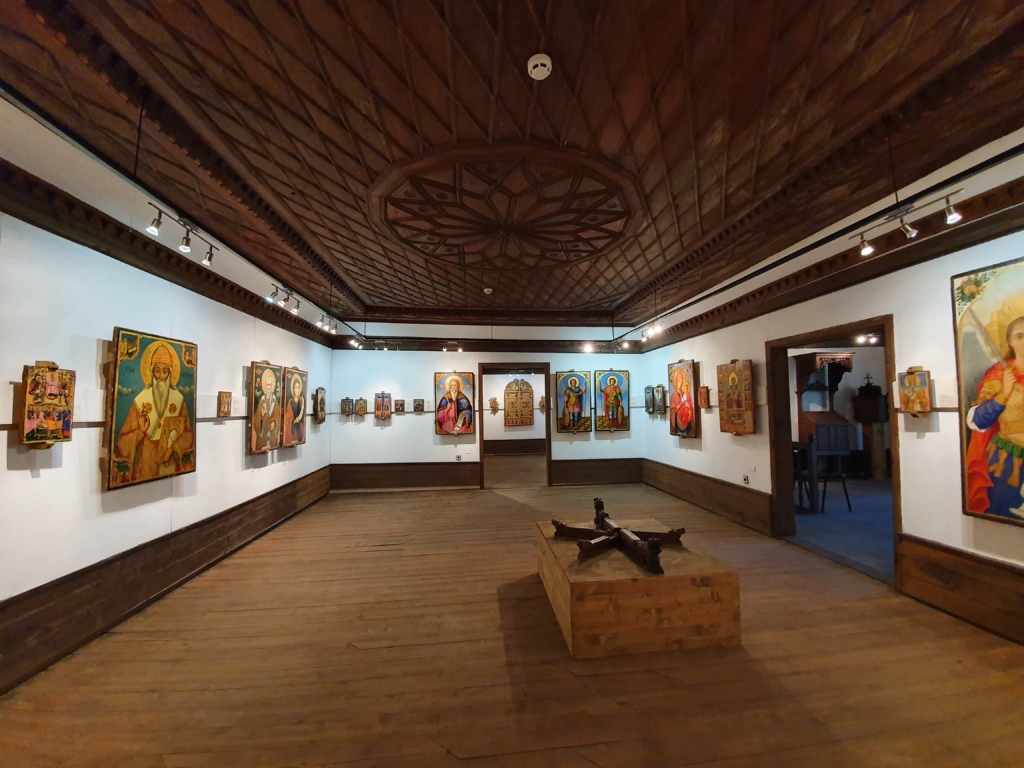 So, there IS what to see in Dryanovo and the area. You may read about the nearby village of Kereka here.