Time for the Vatican

Time for the Vatican

They say that going to Rome and not seeing the Pope is like you’ve done nothing. I admit I didn’t see the Pope but I spent a whole day in his home. That home is full of wonderful things, so many, so different and so valuable each in itself, that you simply stop percieving anything at one point; your senses get stuck. I don’t know what is the right way to see the Vatican – maybe spend less time in several days; but then I haven’t heard them offering such multi-combined ticket say 5 x 1/2 days. Otherwise the ticket prices will sweep your head off. So, there it is on the photo above, something me and my beloved half liked very much at the moment we were still able to like things. A sarcophagus of a happy leisure man with a belly and dish in his hand – who wouldn’t want to be remembered in such a way?! 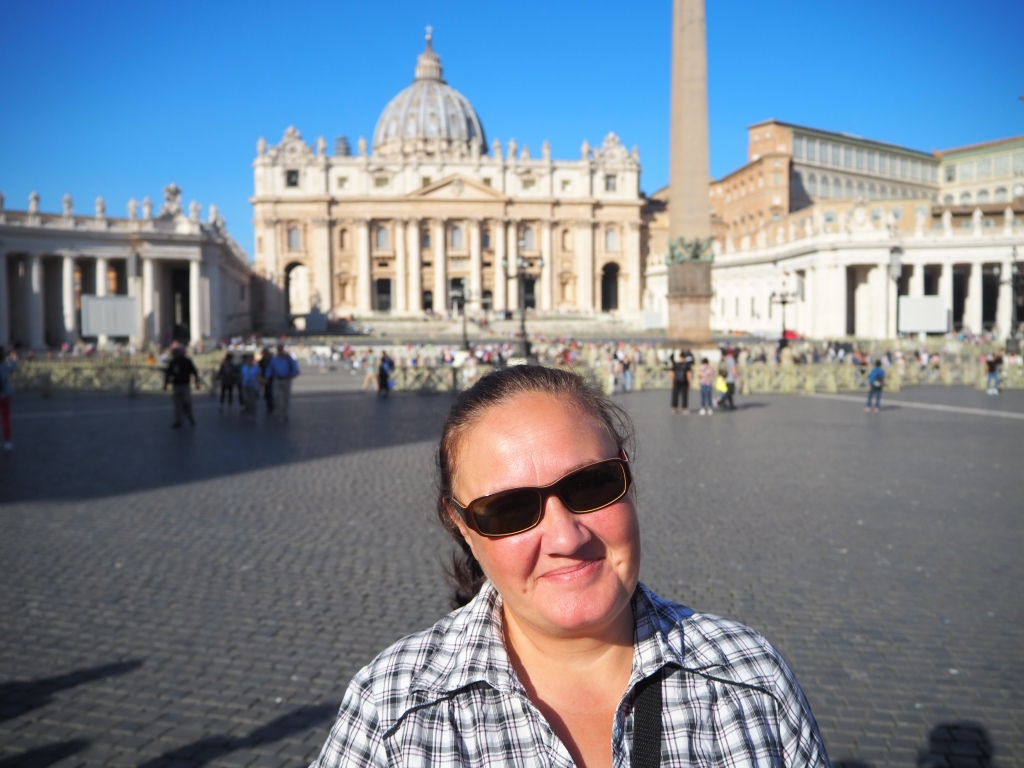 And this is the beginning of our day assigned to see the Vatican which we decided to start in the traditional way, recommended by everyone on the Inetrnet – go early to the square of St. Peter. Good intentions are OK if you don’t over-sleep since this is your 6th day in Rome and fatigue is slooowly taking over. So, it is very good to be at the St. Peter Basilica at its opening hour in order to avoid queues, but we ourselves reached it at 09 AM when the queue was already around the whole square. We waited for a whole hour to get to the desired gates and keep in mind it was October and the sun was not so strong anymore; otherwise there is nowhere to hide from it. The basilica is truly impressive but probably it is the place where you need a guide more than anywhere else, so that you are able to understand at least a bit of what you’re seeing. Or the sticking of senses begins immediately. 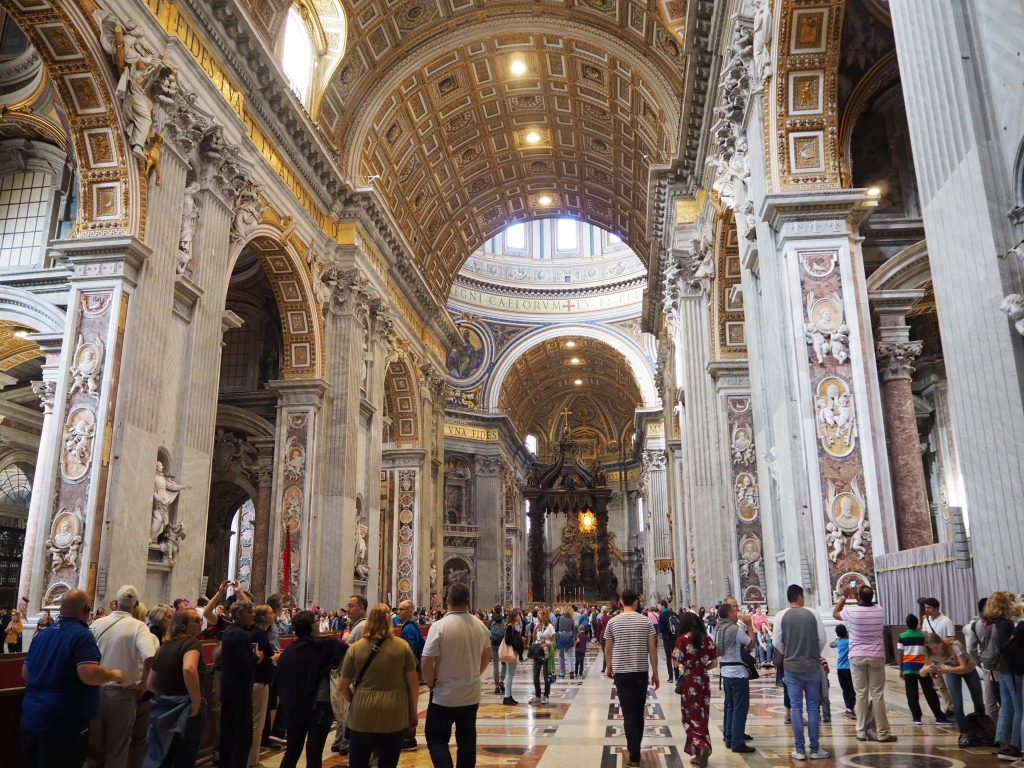 It is good the space is enormous as otherwise the human crowd would not let you see anything else. We, for instance, didn’t manage to come any nearer to Michelangelo’s Pieta. Probably it is worth it to climb the cupola or go down to the crypt where the grave of St. Peter is, but for that you need separate tickets and a guide, and far more time in any case. We had paid for tickets to the Musei Vaticani at 12.00 noon which were specifically Skip the Line tickets, so we had no intention of missing that. Have in mind too that the entrance to the museums is at the other side of the Vatican, so when you exit St. Peter’s, you are up for quite a walk around. This is how you see the Vatican central point when you go out of the basilica at almost noon: 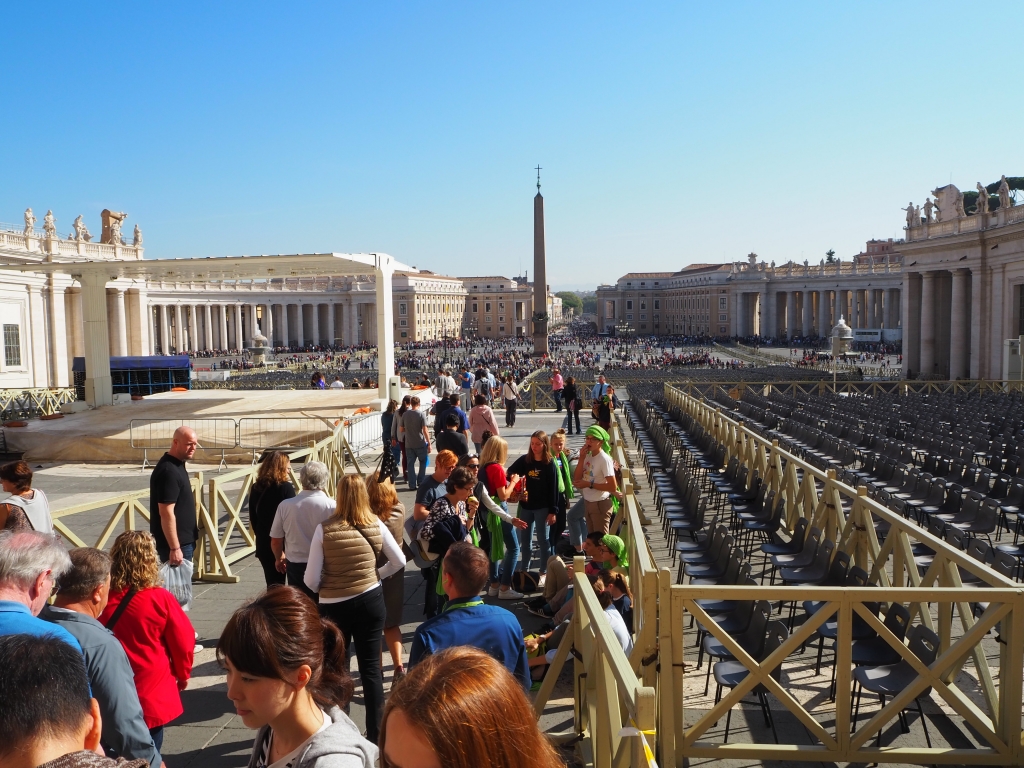 There was quite a queue at the entrance to Musei Vaticani too but for those of us with Skip the Line tickets, things ran smoothly. We decided not to take an audio-guide as it would slow us down even more – having in mind that there was a queue of its own. Plus, the museums are so huge that you can easily spend many days inside. We had half a day only, so we skipped the Gregorian Egyptian Museum much to my regret, but the fact is we have seen Egyptian museums in many other places. So we started with the Gregorian Etruscan Museum since, as I said in an earier post, we know almost nothing of the Etruscans apart from the fact they had a highly developed civilization before being melted by the villian Romans. We discovered, however, that the Vatican might be a separate state but you cannot miss being in Italy as the organization of tourism inside is quite like the outside, that is, completely and sadly absent. 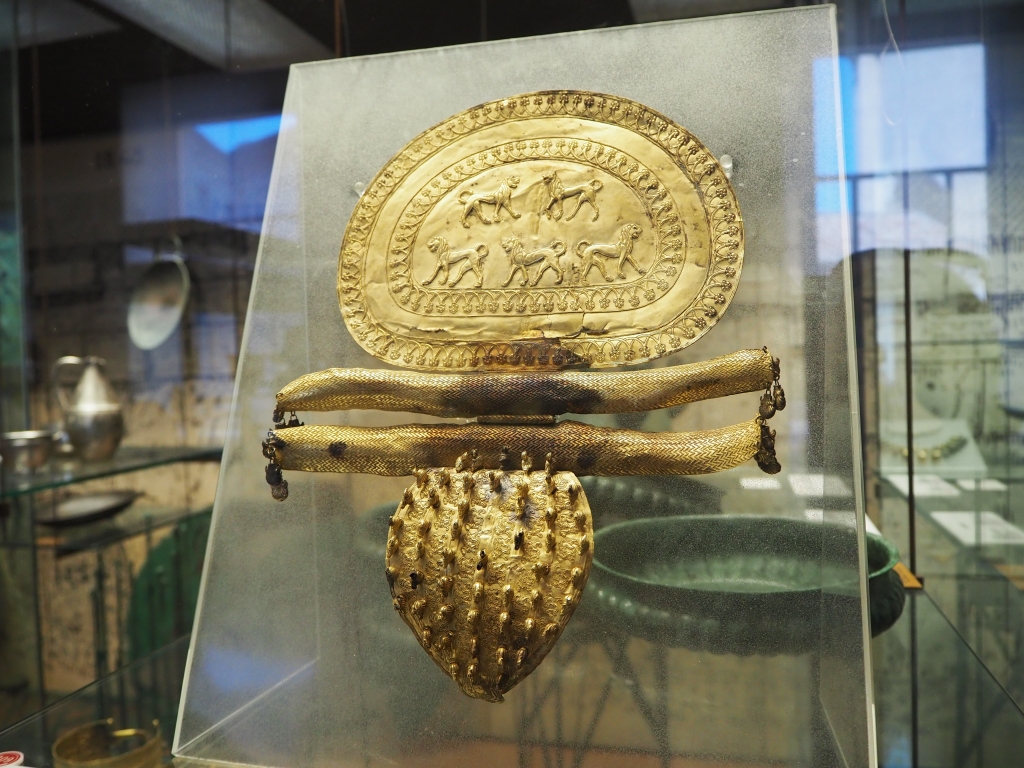 That is how we had to judge about the Etruscan civilization by purely visual criteria and our common culture, as written information was scarce.  We did find items we hadn’t seen before, obviously typical of that civilization, and items like we had seen many times before, e.g. a huge collection of my favourite black-and-orange Hellenic vases, evindence of busy trade relations between the Etruscans and their neighbours. The above photo, for example, shows according to the lable a wall decoration in the form of a ‘fibula’. It rather seemed to me like a weird beetle with an ugly thorny bottom. There were other interesting items as well like these candlebars with human legs. I am sorry about the photo, it’s a bit blurry but you can still see how sinister they look – 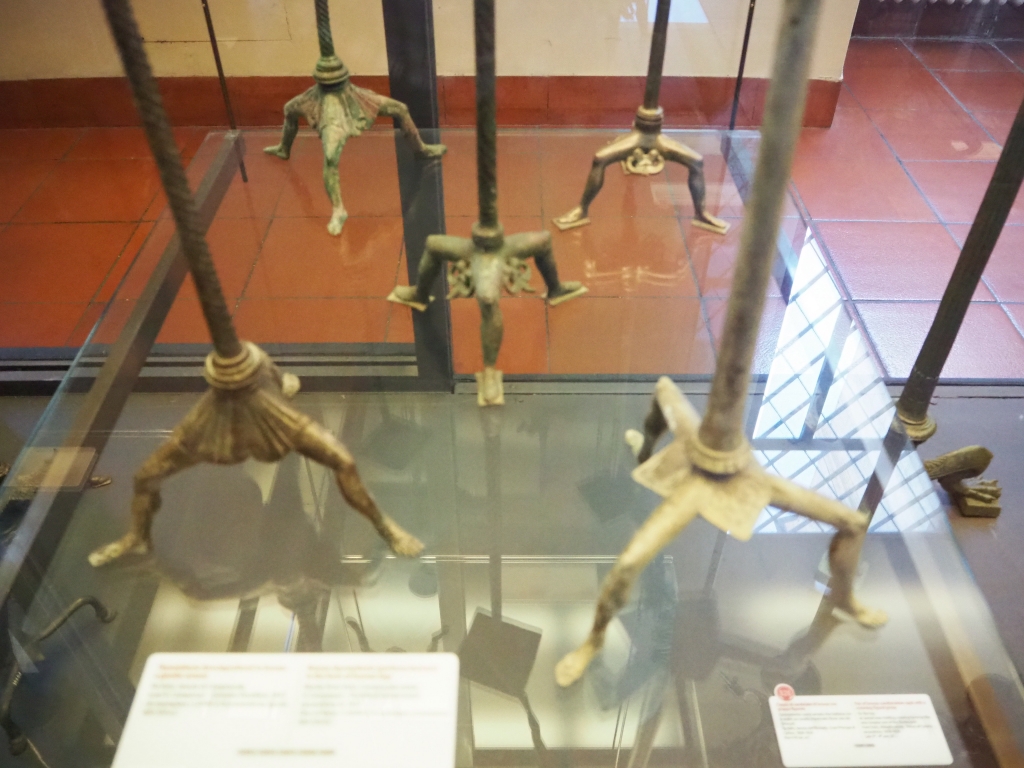 I can’t tell why but this exact museum was the calmest place of the whole complex that day – there were still a lot of people but we could stop at various items and look closer. The only other such place was the large inner yard with a garden and some benches where we managed to find a spot to sit, stretch our tired legs and eat the sandwiches we had brought along. I suppose you could accuse me here of “Balkan”-ness but I can assure you we were hardly the only homemade sandwich-eating nation there at the moment. So I strongly recommend that when you go to see the Vatican. 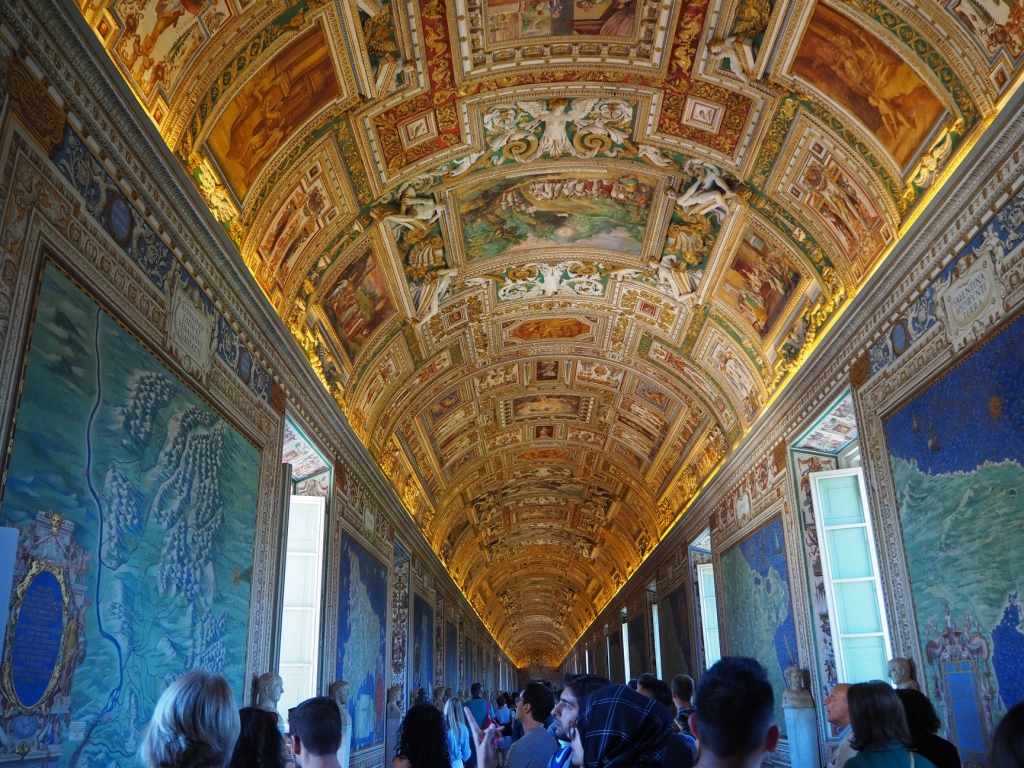 From there on, the rest of the museum complex was simply a nightmare to visit; we found ourselves carried along by a human flow impossible to escape. We were unable to stop by any item and read the lable even; the flow would sweep us away. Our only hope was to click photos above our heads, with the hope of reading something more in the Web later. A lost cause. There is, for example above, the Gallery of Maps which deserves a lot more attention, and not only to the curious maps on the walls but the magnificent ceiling too. Speaking of ceilings and walls, I must mention the Sistine Chapel. It may be attached to the St. Peter Basilica but the only entrance for visitors is through the Vatican Museums. And there it gets ugly. They do not let you take photos at all, and at every meter there is a local warden who gives a recital “Go on, do not stop, go on, do not stop…” If, by any cnahce, you do stop to look at the ceiling, one of them appears immediately and starts pushing you in the back, in a very non-Christian manner. 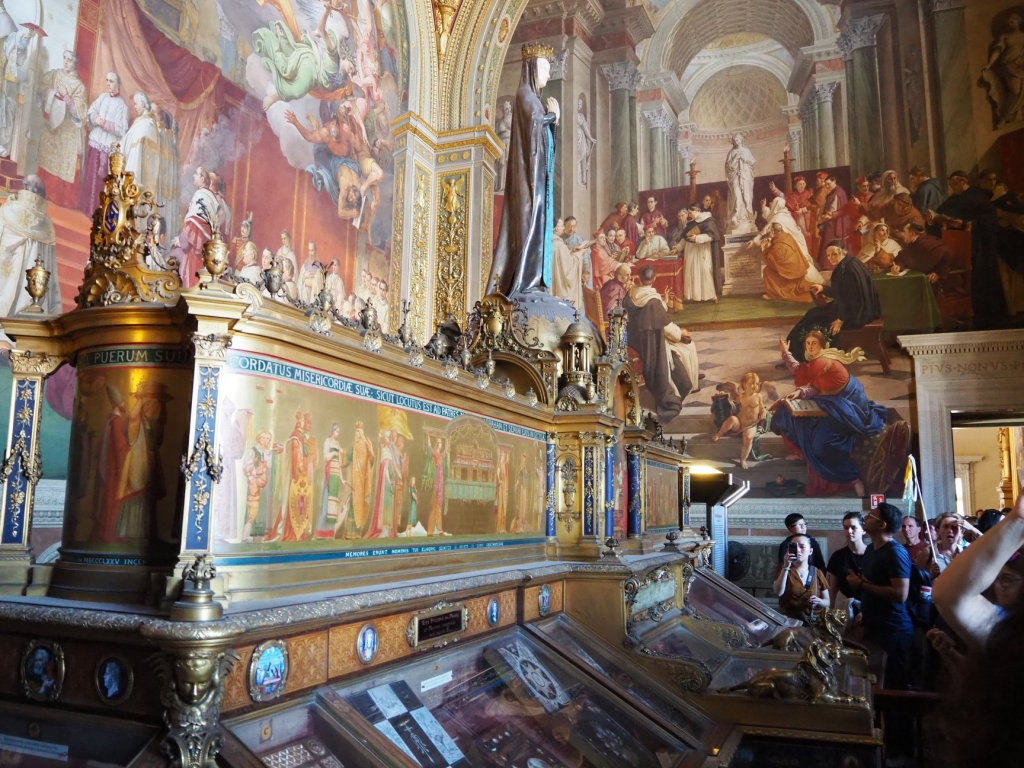 I chose the above photo to illustrate once again what I already said about Vatican and Rome – on the second hour, your senses are stuck and you stop perceiving unique pieces of art and history which would drop your jaw open in any other place. The feeling you get upon leaving is Oh My God, how many things are piled here, and in the general case not even sorted by type, year or anything. For example, the Pio Clemente Museum is not a museum dedicated to the person and life of someone called Pio Clemente but an exhibit of everything that one of the Pius Popes managed to collect. The other feeling you leave the Vatican with is that your legs are 5 cm shorter. I do not recommend doing what we did when we left the Museums dizzy and dehidrated and saw a very welcoming little coffee-shop just opposite the exit. Two desserts, two bottles of water and a coffee, plus the privilege of consuming them right in front of the Musei Vaticani costed us exactly 40 Euro. Enjoy! 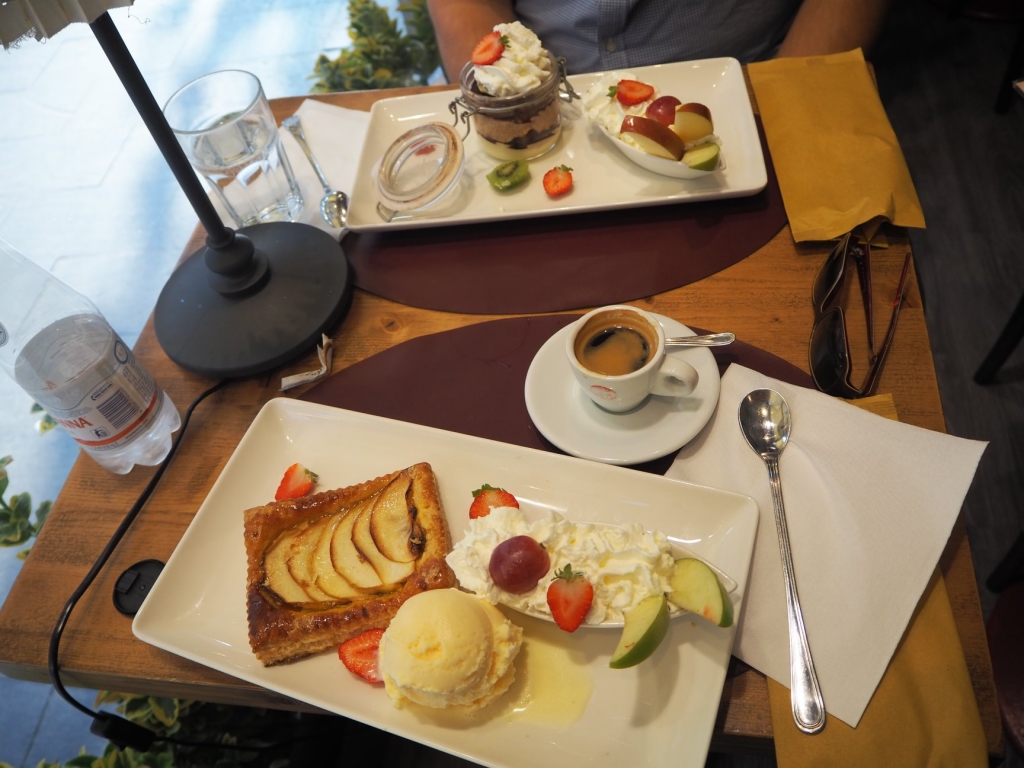