The fourth largest city in Croatia

The fourth largest city in Croatia

Its name is Osijek and it is located in the north-eastern corner of the state, somehow between Serbia and Hungary. I got there on a seminar, following my heritage interpretation training in Elefsina, Greece. Despite its size, most visitors to Croatia have absolutely no knowledge of it, apart from being the first name to appear on the road signs of the highway to Zagreb when entering from Belgrade. Driving myself from Blagoevgrad town in Bulgaria, I expected to find a narrow country road when I take the deviation from the main highway; however, it turned out there was another highway leading to the very city of Osijek, with toll-pay booths and all the rest. One has to keep in ming though to check the setting of his Google Maps on the phone on the way back. If it is set on ‘the shortest route’, THEN you’ll have an abundance of narrow country roads all the way up to 80-ish km before Belgrade. So, Osijek. The town has an interesting history and plenty to show, so it is definitely worth the deviation from the road to Zagreb. The above photo is from the Museum of Slavonia which is located on a picturesque square on the old navel of the town bearing the name of Tvrdja (I just love the crowding of consonants in the Croatian language) – 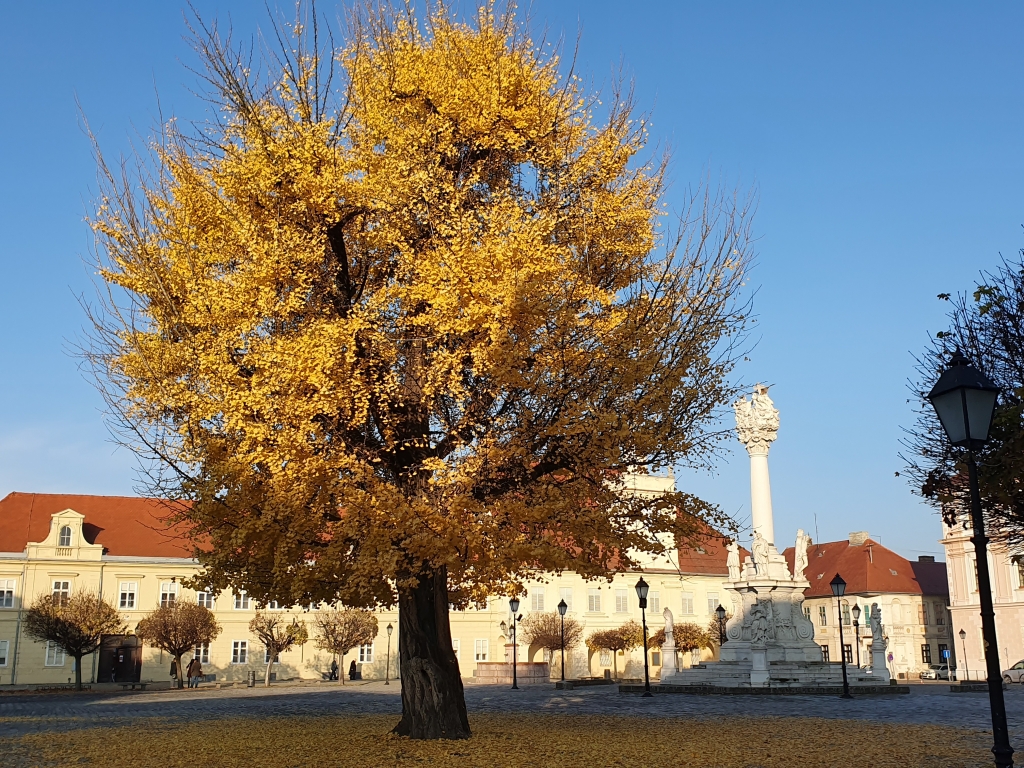 Visiting in the right season, I could enjoy a picturesque Ginkgo tree on the same picturesque square, in wonderful golden colours. In the Tvrdja, you can also enjoy good local cuisine and beer; I myself made a discovery in the dark Croatian beer of Tomislav. Furthermore, the complex is located on the banks of Drava River – quite a big one ‘carrying’ the border between Croatia and Hungary for its greater part – so you naturally have the bonus of a riverside walking alley. Unlike the park component, autumn is not the nest season for the river one, so I offer a night photo of the favourite pedestrian bridge of the citizens of Osijek – 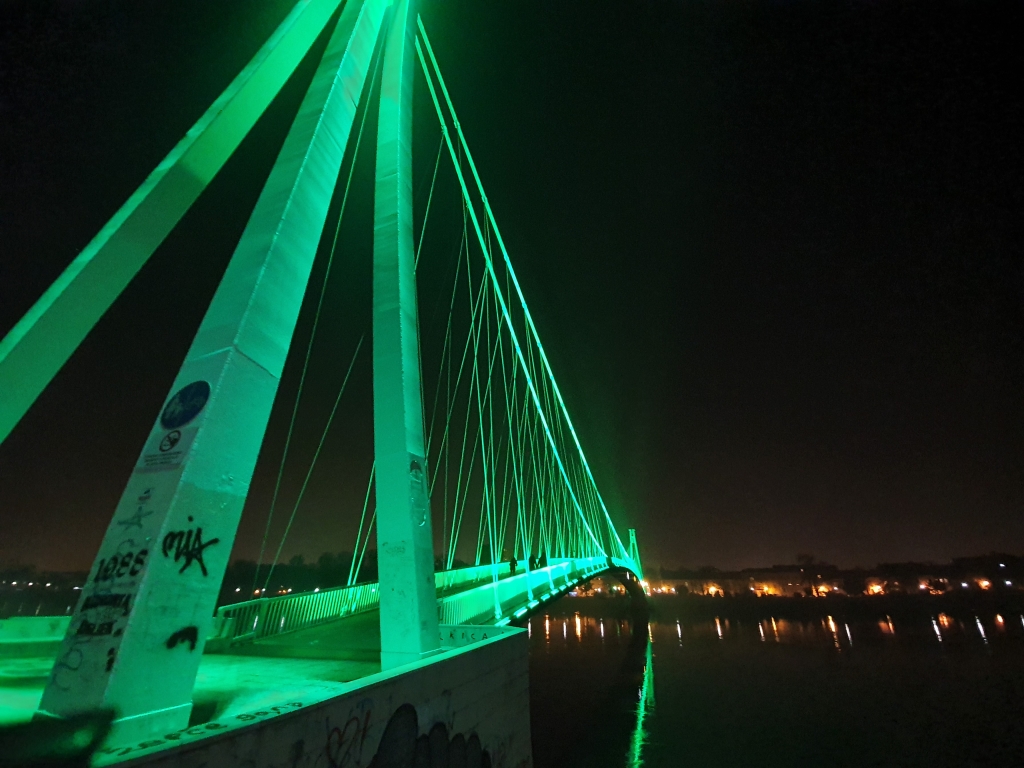 I am truly sorry that I cannot show this on a photo but there is a mist flowing over the water at night literally like something alive. The riverside ally runs parallel to the most attractive street in town, the so-called Evropska Avenija – or Europe Boulevard. Its attractiveness comes from the well-organized lines of gigantic Secessionist-architecture houses on both sides which today host the library, the town’s court, local radio and TV and other public institutions but in the past were the private residences of local grands. Something like this – 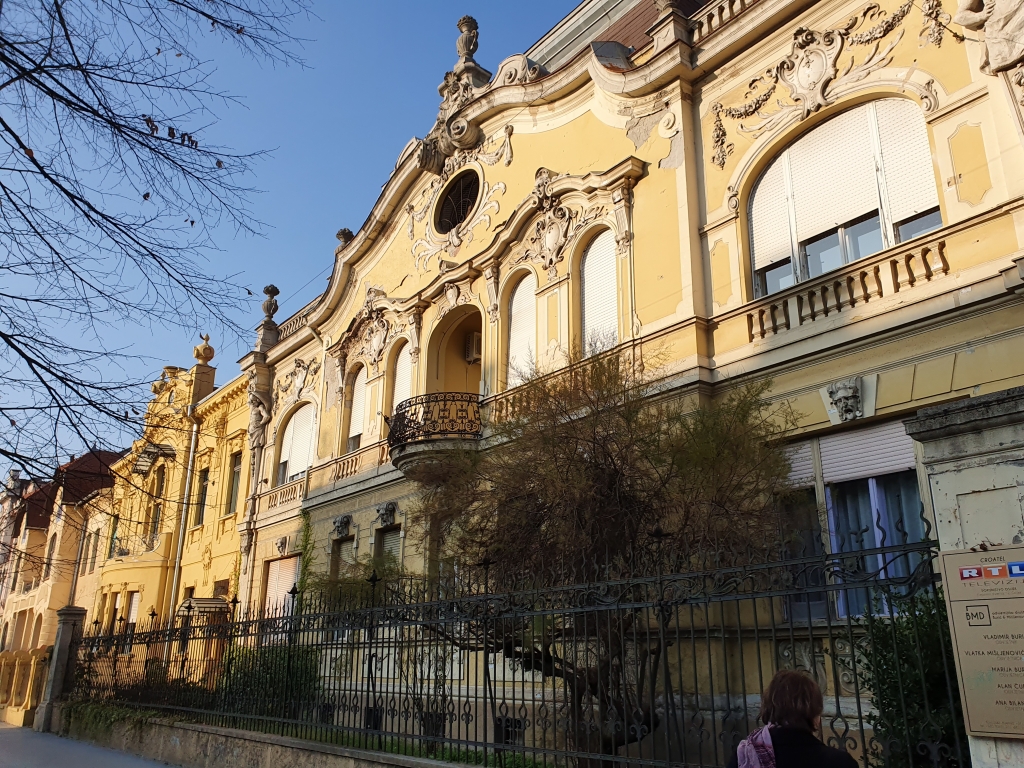 One of the emblematic buildings in Osijek is the so-called Co-Cathedral (I read the Wikipedia but am still unaware what the ‘Co’ stands for) of Saint Peter and Paul whose bell-tower is, with its 90 m., the second highest in the country after the Zagreb Cathedral. Now that building looks equally beautiful in both day and night, although I couldn’t see it from the inside; such was my programme. 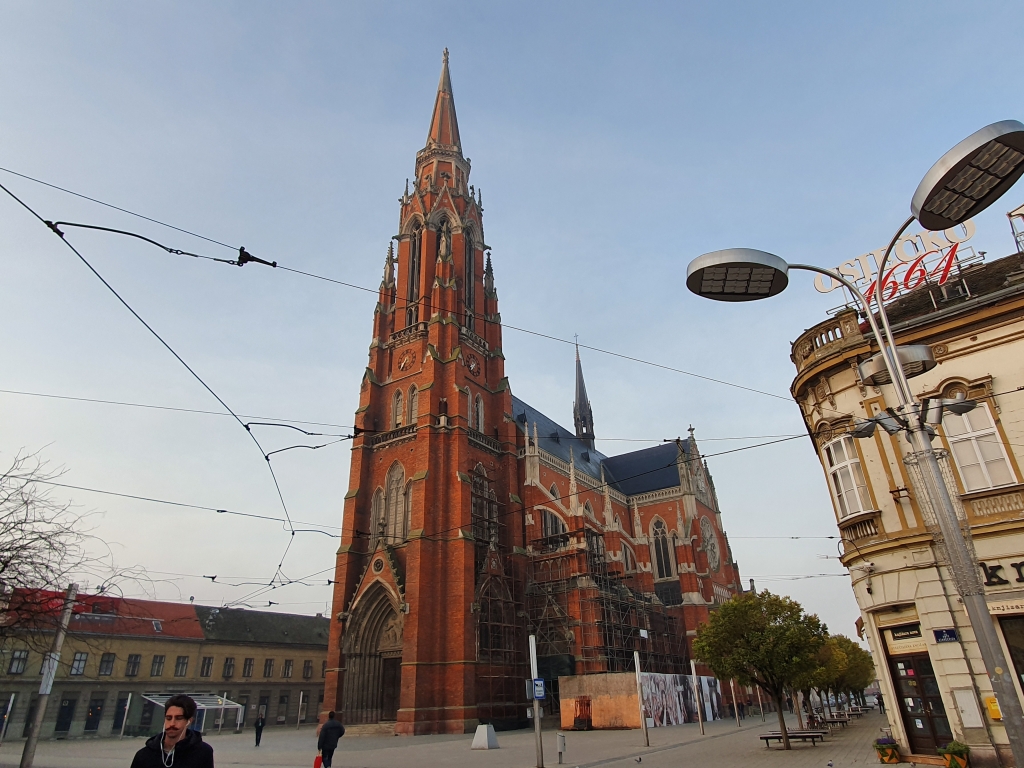 The city also keeps some unpleasant memories, including from the brother-against-brother civil war during the splitting of former Yugoslavia when the front line passed close by and many of the Secessionist buildings are still bearing marks from the military actions. At the same time, the basements under the Museum of Slavonia have been used as prison in many stages of the life of Osijek and the walls of the prison cells tell a number of sad human stories. From the declarative protest against the lack of justice (as far as we understood, there was a servant once imprisoned here only because he trimmed his master’s horse a little too much), to counting the passing days by scratches in the paint or expressing one’s missing his family through the small figurines holding hands.

I had decided to finish my post with something more joyful and I hesitated a bit between addressing children (including the grown up ones) and only adults. For the first, I have a photo of the Christmas tram trotting around the streets of the city packed in bright lights and with a Christmas ‘hat’ on front. But I couldn’t resist showing you the original defence mechanism invented by some of the above-mentioned old grands against damages inflicted on the edges of his fence by passing cars or carts. You can make whatever you like of it; I shall leave it without comment – 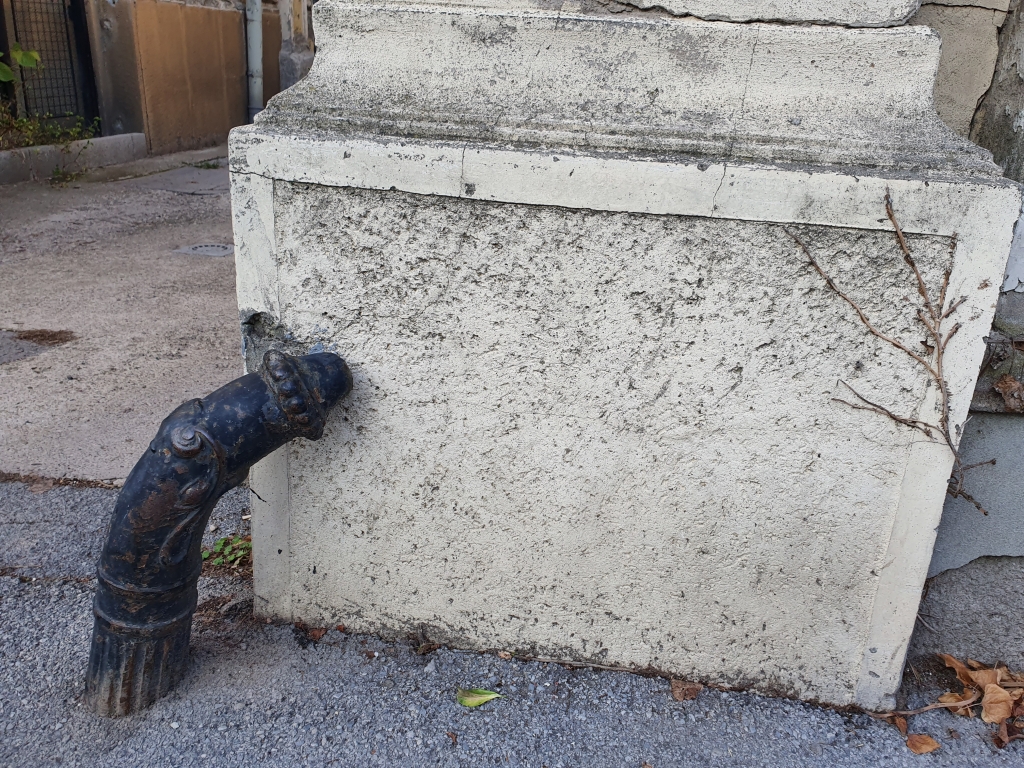