Home/Ah, that Evans!
Previous Next

This little article is about Knossos, and I have not put the title wrong. Knossos is the most famous archaeological and – I believe – tourist site on the island of Crete, and Evans is the ‘guilty one’ for that. His bust welcomes the visitor just like some serious rebel in Bulgarian squares and gardens, and henceforth peeks out from every information board around the site, until we grasp that the important Englishman not only discovered the place but everything we see today is his vision of it. I read in another article that the gentleman’s fellow archaeologists are very critical about his free use of concrete during the excavations and ‘restorations’ of buildings, as well as the ‘free interpretations’, but for the ‘general tourist’, without any special knowledge, that was just ‘perfect’! Now, I have run out of quotation marks… So, I too don’t have any special knowledge but it appears I am also not a general tourist, and that’s that. 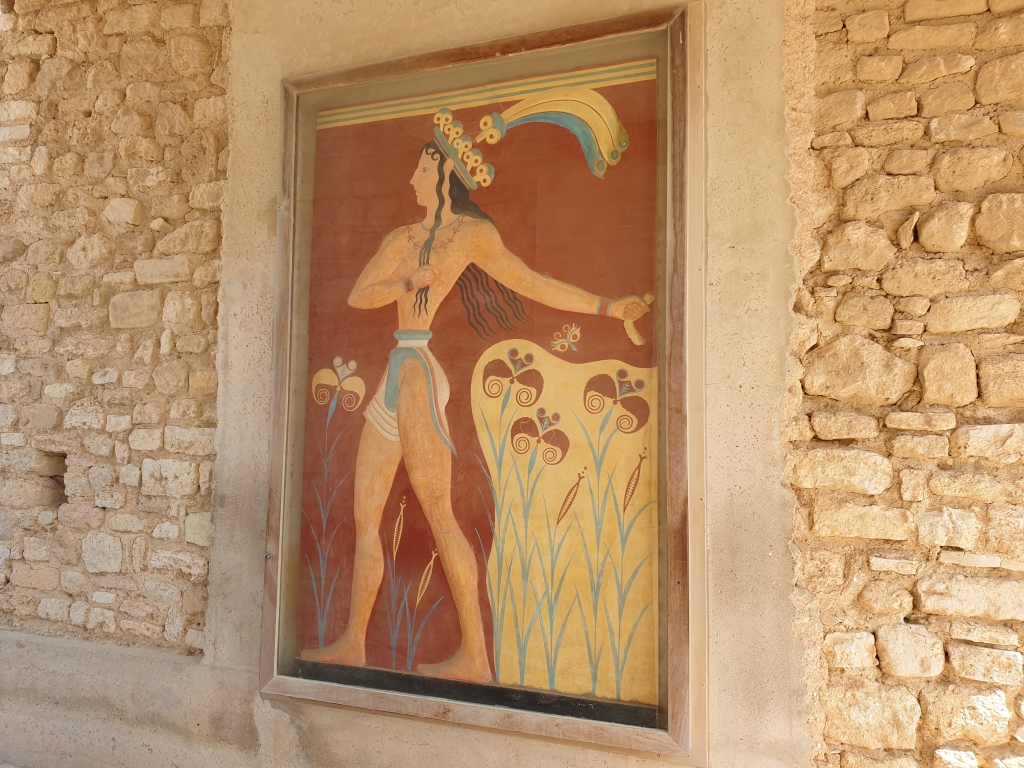 That mighty young man with the strange pants is part of the ‘free interpretations’ of the famous archaeologist. There are several huge frescoes like this around the site, whose info-boards say that they have been ‘transferred’ here by Mr. Evans, only not how and where from, and why exactly here. Enough about the gentleman already as I said this is an article about Knossos and it has started to appear like an article about something else. Knossos, apart from being the most famous tourist site on the island, is the largest known site of the heritage of a culture which is defined as the first civilization in Europe – keeping in mind that the historical science defines as ‘civilizations’ only cultures who develop some form of writing. It evolved during the Bronze Age, we are speaking about the 2nd-1st millenium BC, and was centered around two islands – Crete and Santorini, plus some smaller islands around. For me, that fact is amazing in itself as I am not sure whether we, modern people, can truly imagine what it’s like to maintain communications and trade over un-mapped seas, run by dieties and demons, in little boats tied together by ropes! 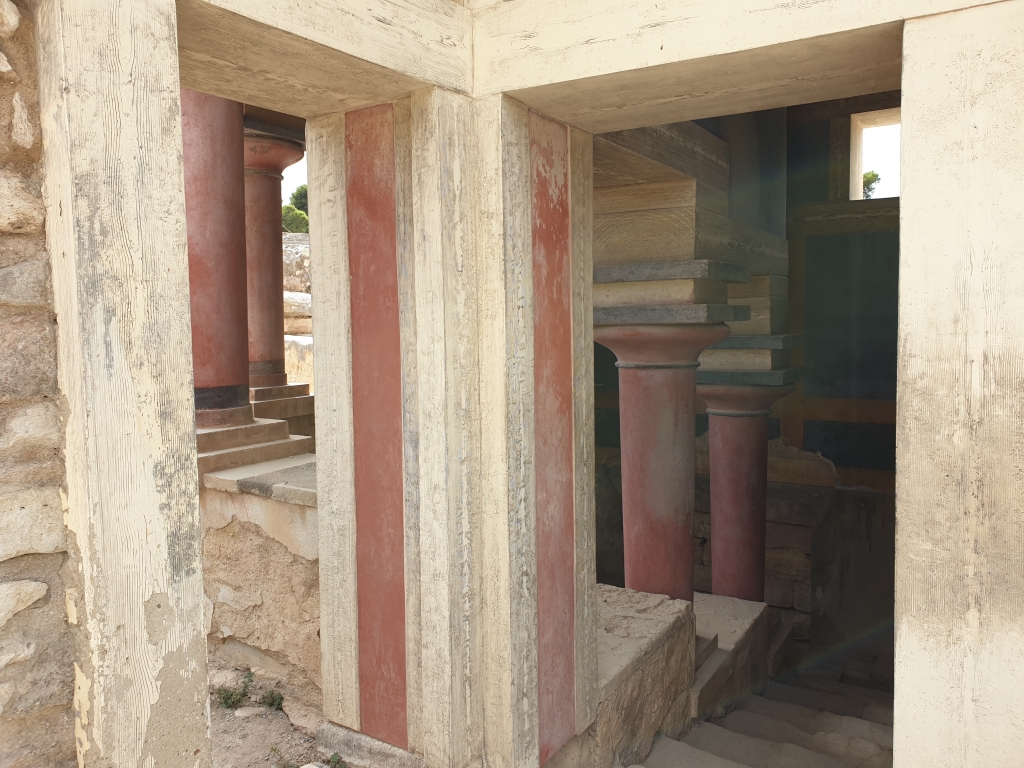 The name by which we call that civilization – Minoans – was also introduced by Evans and is related to the Greek mythology and more specifically the legend of King Minos, the Minotaur and his Labyrinth. The above photo gives a very slight idea about why the man made this analogy between the excavated site and the Labyrinth. How the ancient Cretans called themselves, we have no idea as, despite the discovery of not one but three types of scripts that these people used (called Linear A, Linear B and pictograms), all three are not quite de-cyphered today. At many places, one can read that the Minoans were best known for the construction of palaces and Knossos is known to be the largest of those; however, the term ‘palace’ is quite inaccurate as we speak about a whole town with a population of (depending on the source) between 90 and 100 thousands! In the Bronze Age, on an island!!! There, I’ve run out of exclamation marks as well. 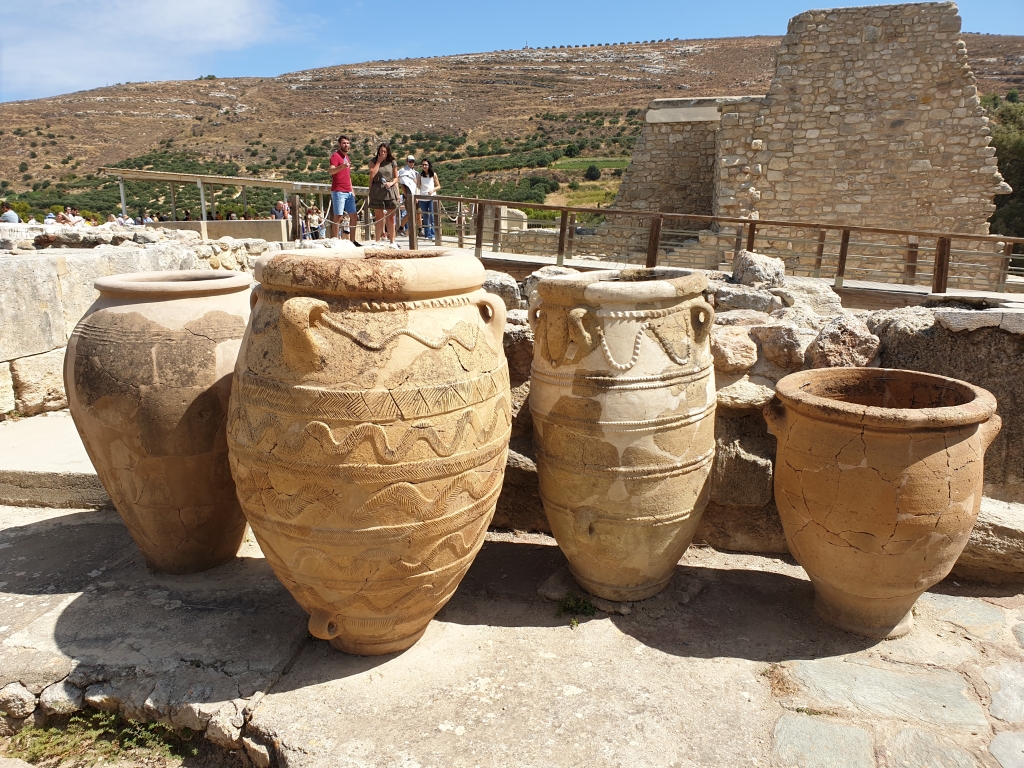 From this amazing civilization, we have received things that are not to be seen elsewhere, like the scripts I already mentioned and these huge clay pots with interesting decorations. The appearance of the Minoans seems Hellenistic but not quite. The bull obviously did not appear in the Labyrinth myths by accident either as it was part of the culture – judging by various frescoes and other artifacts, more or less ‘restored’ by Evans. 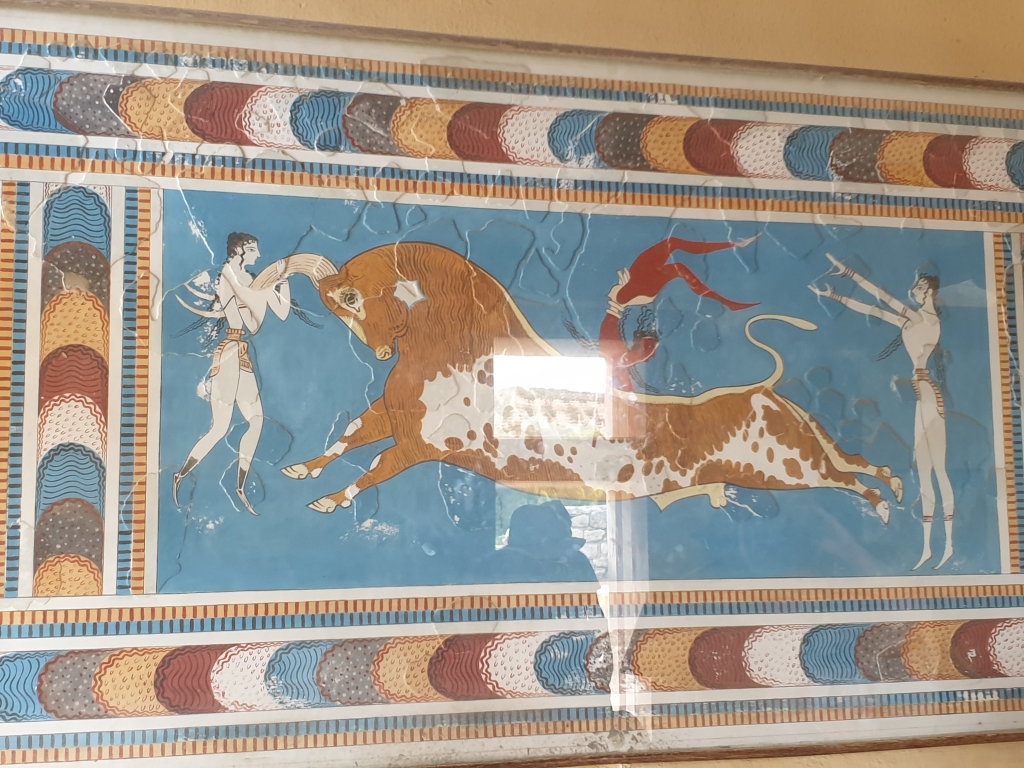 Now, I wouldn’t like you to think that I am trying to discourage anyone who’d want to visit Knossos. It IS worth it, although never on a day when it is not good for going to the beach (you may not see anything from the site due to the huge crowds). To me, the whole British-restoration-business was a bit dissapointing but what the hell, why couldn’t we be ‘general tourists who do not have special knowledge’? It is more intriguing what finaly happened to that unique civilization – where we actually do lack special knowledge. It is claimed that the end came with the eruption of the big volcano on Santorini Island but first, there are quite a lot artifacts after the supposed date of the event; and secondly – it was on another island! Well, I know nothing of volcanoes; ash may have fallen over the whole of the Aegean for years after the eruption. What is left for us is this: if you are visiting Crete in the warm season, go to Knossos, but better spare a day from sea-bathing, bring hats and water as it is very hot there, and be prepared to endure the long queue at the main square for the Throne Room: 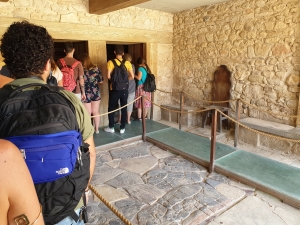 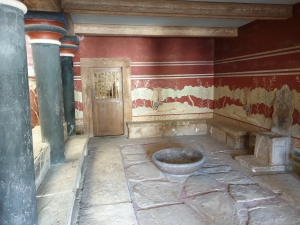 More about the Minoans can be found in Heraklion and Chania.